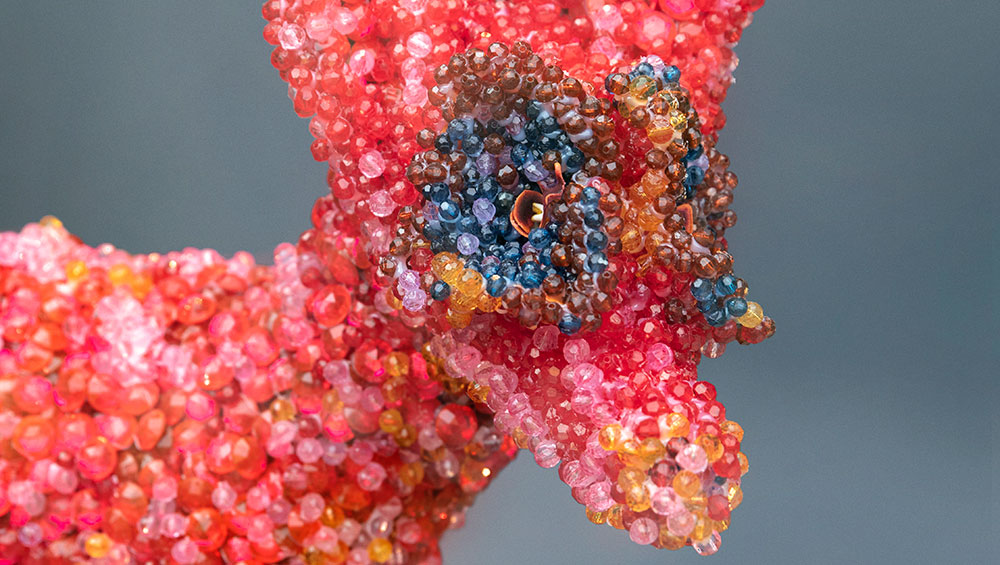 Savannah College of Art and Design (SCAD) opened its 11th edition of de:FINE ART, with a smorgasbord of exhibitions at the SCAD Museum of Art in Savannah and the SCAD FASH Museum of Fashion + Film in Atlanta, its two museums in the US (it has another one in Lacoste, France). The artists showing in Savannah are from around the world, reflecting SCAD’s international outreach, a venture abetted by its head curator, Humberto Moro.

In Atlanta, Derrick Adams (US) is the featured artist. Curated by Alexandra Sachs, the executive director of SCAD FASH, his striking show of collages and sculpture is a tribute to Patrick Kelly (1954-90), the influential African American fashion designer who should be more widely known. It is dominated by primary-hued abstractions (Fashion Avenue Boogie-Woogie, anyone?) that riff on Kelly’s clothing patterns, fabrics, accessories and paint and is joined by exhibitions that show off the fashions of Adrian, the once ubiquitous Hollywood costume designer (think The Wizard of Oz, ruby slippers and old black-and-white films from the 30s with the credit: gowns by Adrian) paired with Azzedine Alaïa, the late Tunisian-born couturier whose star began its ascent in the 1980s. 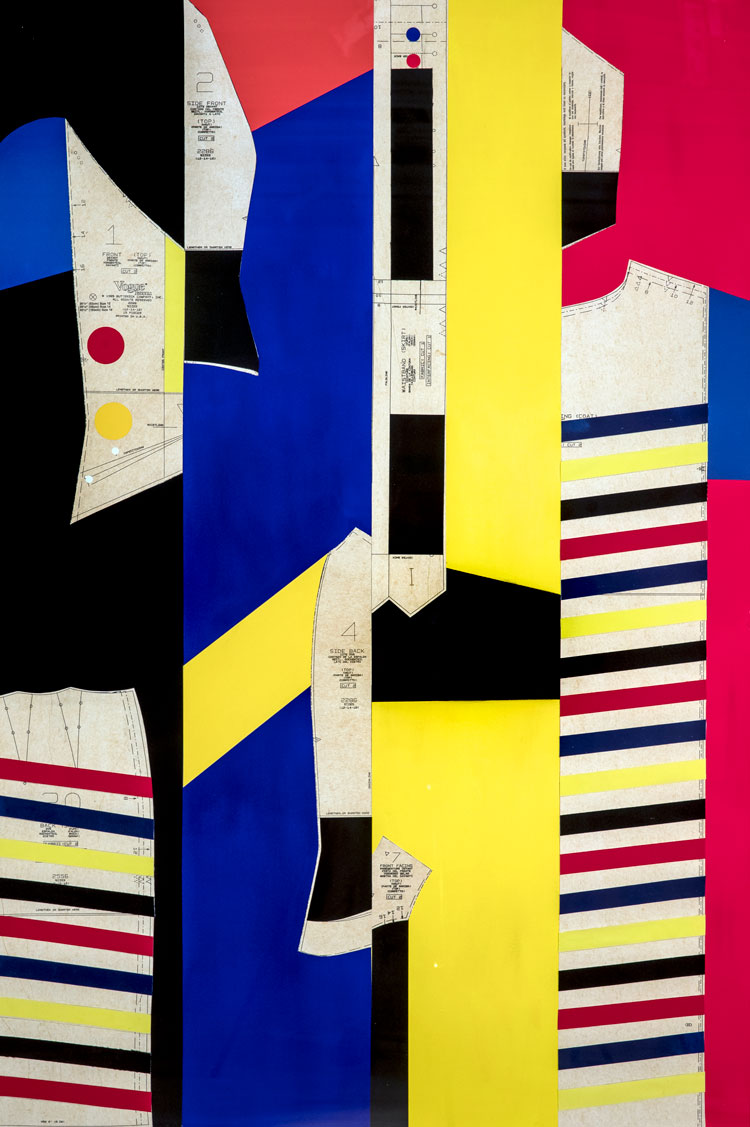 Each de:FINE edition has an honoree and keynote speaker. This year, it was Marilyn Minter, a New York-based artist who is best known for dazzling, provocatively cropped closeups of women’s bodies and faces. Minter, who has been showing since the 1980s – her work stemming from 60s pop and photorealism – broke out more than a dozen years ago when she was the poster child of the 2006 Whitney Biennial (she likes to say that the art world loves bad boys and old women, although she is still more bad girl than otherwise). Focusing on the complex constructs that shape our current ideas about femininity and female sexuality, she seizes the often cliched signifiers of allure, recontextualising and repossessing them, finding new and enthusiastic audiences among the millennials, who find her wholly relatable. 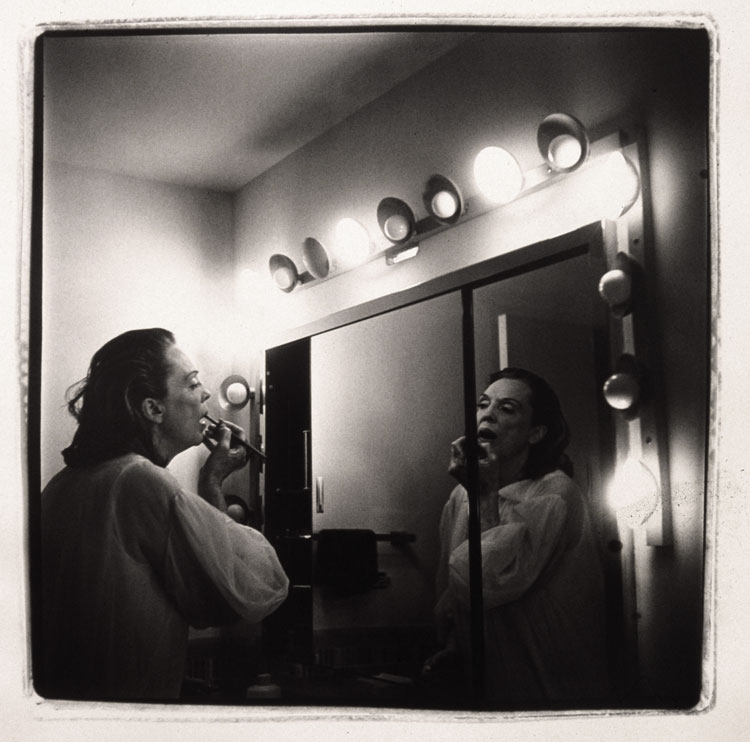 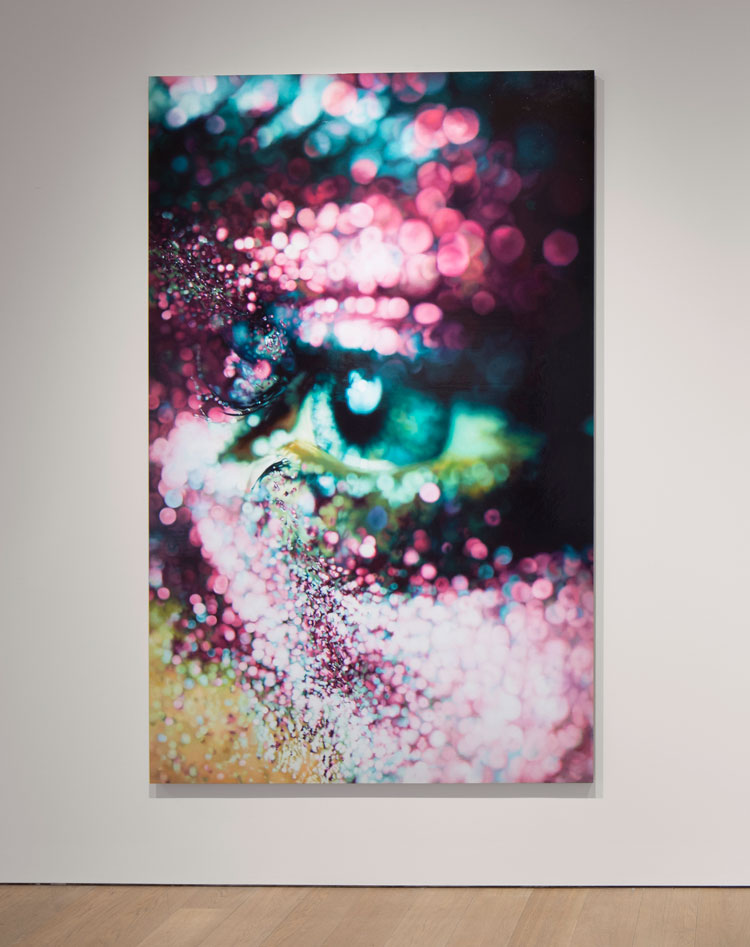 Marilyn Minter, Glazed, 2006. Enamel on metal, 96 x 60 in. Courtesy of the collection of Jeanne Greenberg Rohatyn.

The three showstoppers, however, are those in the instantly recognisable style that made her famous. Glazed (2006) is an eye seductively encrusted with sparkling pink and green glitter, looking smudged and soiled, as if after a long night. The riveting 2009 photograph of the admired artist Wangechi Mutu (Minter’s subjects are usually friends and celebrities) focuses on her mouth, another frequent Minter image. What we see of Mutu’s lower face is dusted gold, her lips metallicised, burnished a silvery bluish and morbid black that both attracts and repels.

Among the other exhibitions here are the Fables of the rising Hong Kong artist Wong Ping, although we might call his series of stories Foibles, culminating in ironic maxims, lessons learned, maybe. In them, he imagines the most hapless of characters, both human and not, although they are also improbably endearing, filled with anxiety, a curious pragmatism and an equally curious tenderness, striving to survive in a dysfunctional, destabilised world. 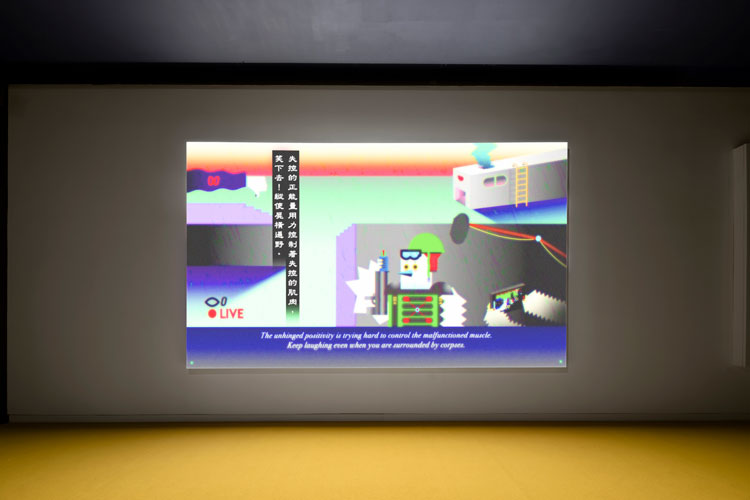 His ingenuous, clunky style of animation, based on popular animation software, is also extraordinarily appealing, an antidote to the slickness of much contemporary media and well-suited to the artist’s absurdist dystopian monologues. 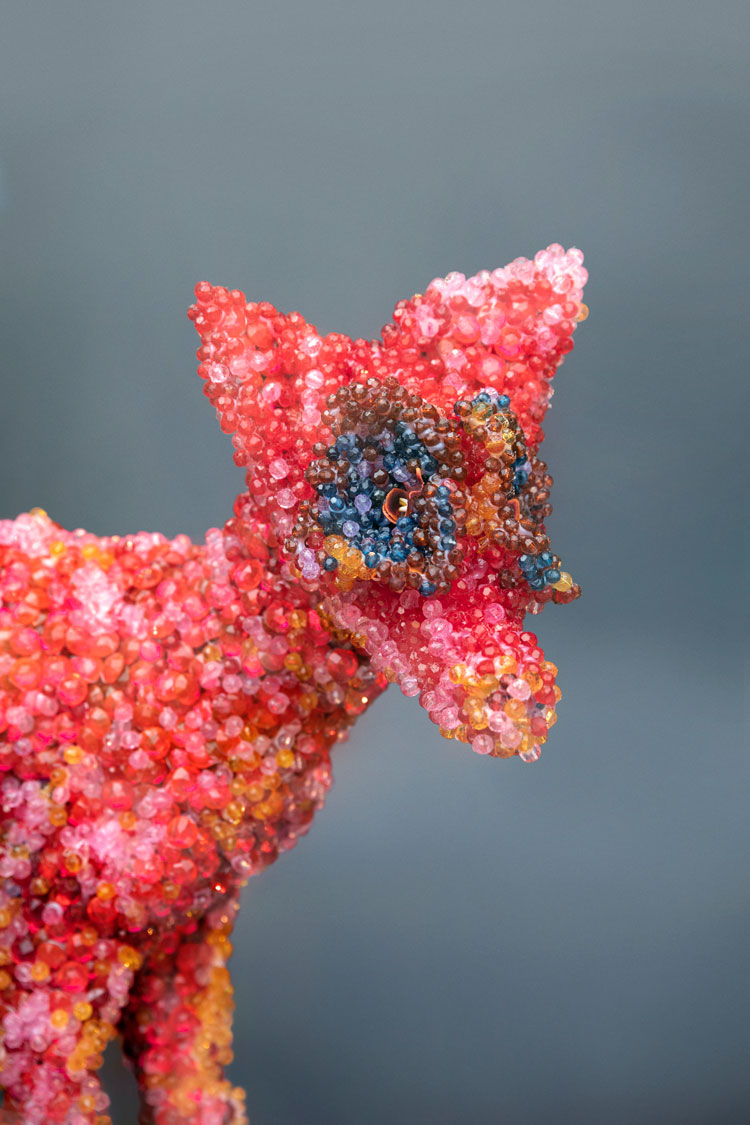 On another note is the Italian-born, Brazilian-based artist Anna Maria Maiolino’s enormous installation that evokes a map and was a collaborative effort created with students who modelled the clay components. The Brooklyn-based Raúl de Nieves (whose dazzling Whitney Biennial installation of 2017 was arguably its most Instagrammed and Instagrammable) was in fine form here, his jewel-coloured mixed media creatures and tableaux placed in the line of arched windows that fronted the street facade of the museum. 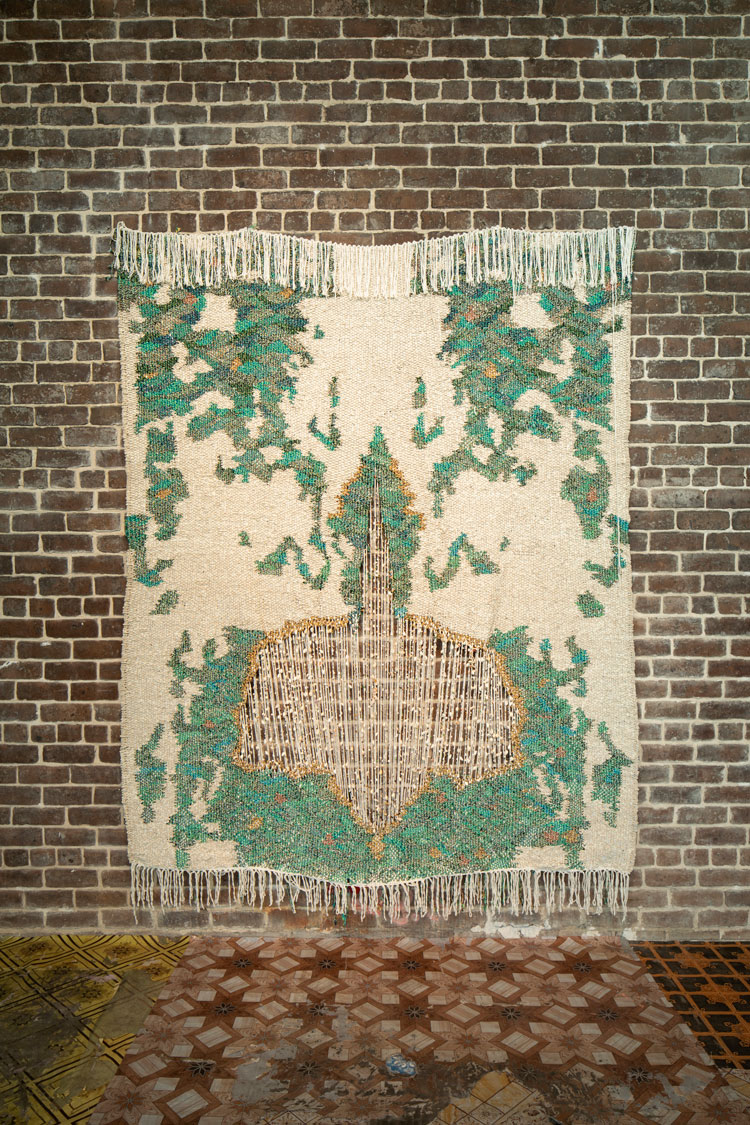 The exhibition of the South Africa artist Igshaan Adams was curated by Storm Janse van Rensburg, the former head curator of SCAD Savannah and now the senior curator at the Zeitz Museum of Contemporary Art Africa in Cape Town. Occupying the dramatically long gallery that runs nearly the length of one side of the museum, it begins with a sympathetic letter-sized self-portrait sewn into a scrap of blanket hung on the wall, while on the floor rests a stool and plastic washbasin for the washing of feet, a reference to the Muslim ritual of purification. The entire gallery floor is covered with sections of worn linoleum that are typically part of the dwellings of Cape Town’s workers and mixed-race communities. Sculptural objects made of string and fabric and splendid wall-hung weavings such as Threshhold II (2019) are installed along the way like doorways, simulating a walk down the street of a neighbourhood. The installation documents real lives and spaces, pushing marginalised peoples into a more central space, such as this one in a museum, a space that is secure and valorises their lives as significant. A poignant visualiser of narratives, Adams searchingly images the past as a way to go forward. 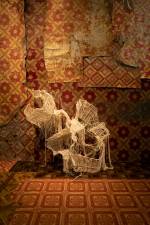 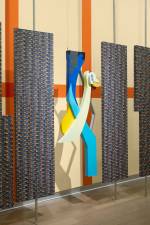 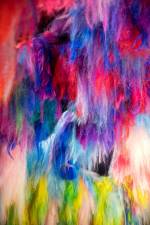