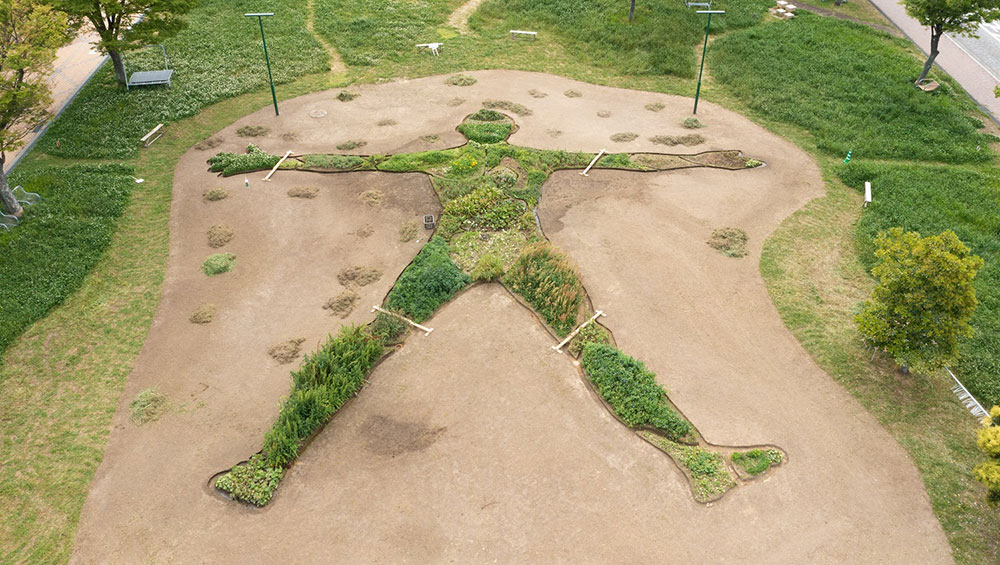 This year’s international Kitakyushu Art Festival, Imagining Our Future, held in the Japanese city of Kitakyushu, in North Kyushu, brings together work from 30 artists, the majority of which was commissioned for the festival, to address the issue of sustainable development goals (SDGs).

From the beginning of the 20th century, spearheaded by coal mining and the steel industry, Kitakyushu city was a symbol of Japanese modernisation, contributing substantially to the country’s economic development. By the 1960s, however, the city had become notorious for causing environmental contamination and damaging the health of the local people who worked in the industry. In the 1980s, in an effort to redress the problem, the city introduced policies to reduce air and water pollution, and companies in the region accelerated the development of environmentally friendly technologies. While action to reduce pollution and improve the environment has been taken by activists, companies and government, now, in the 21st century, art also has a role in addressing these issues and offering us hints as to how we citizens can play a small but meaningful part in change.

At the Higashida Oodoori Park, which is surrounded by green fields and residential districts, the artist Eiki Danzuka has used various herbs that are indigenous to the area. Titled Medical Herbman Cafe Project 2021, the work features a 25-metre-long, human-shaped herb garden, planted with silver vines, Japanese mugwort, dandelion, plantain, thistle, Thunberg’s geranium and other wild medicinal herbs that grow in the neighbourhood. The herbs are individually planted in the area of the body on which they are said to have an effect. Supervised by locals who know about the folk remedies of each herb, the artist invites visitors to take note that wellbeing, which is one of the SDGs, can be achieved by following sustainable methods, using ancient know-how and the natural resource that grow around us, rather than buying state-of-the-art medicines. Over the course of the festival, the herbs will grow, and freshly brewed herbal drinks will be available to visitors at the Medical Herbman Cafe. 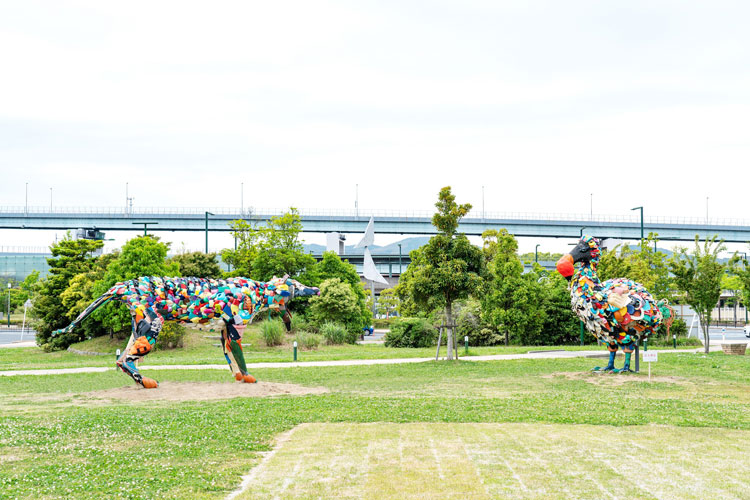 Hideaki Shibata, who goes by the name of Yodogawa Technique, is also showing at the park. He  addresses the issue of global waste. His sculptures, of two large extinct animals, Kitakyushu Dodo and Kitakyushu Tasmanian Tyger (both 2021), are made from plastic waste washed up on the coast of Aino Island and collected by the artist and local people. Ranging from rubber boots to a soap dispenser and plastic buckets, all the objects are household items that are in daily use. Some reclaimed pieces are inscribed with Hangul and Chinese characters unique to the Kitakyushu region, which is close to Korea and China. The artist has assembled the colourful discarded plastics in a playful manner, showing how waste can be turned into taste, but also drawing attention to the impact humans have on the environment, eventually driving rare animals to extinction. 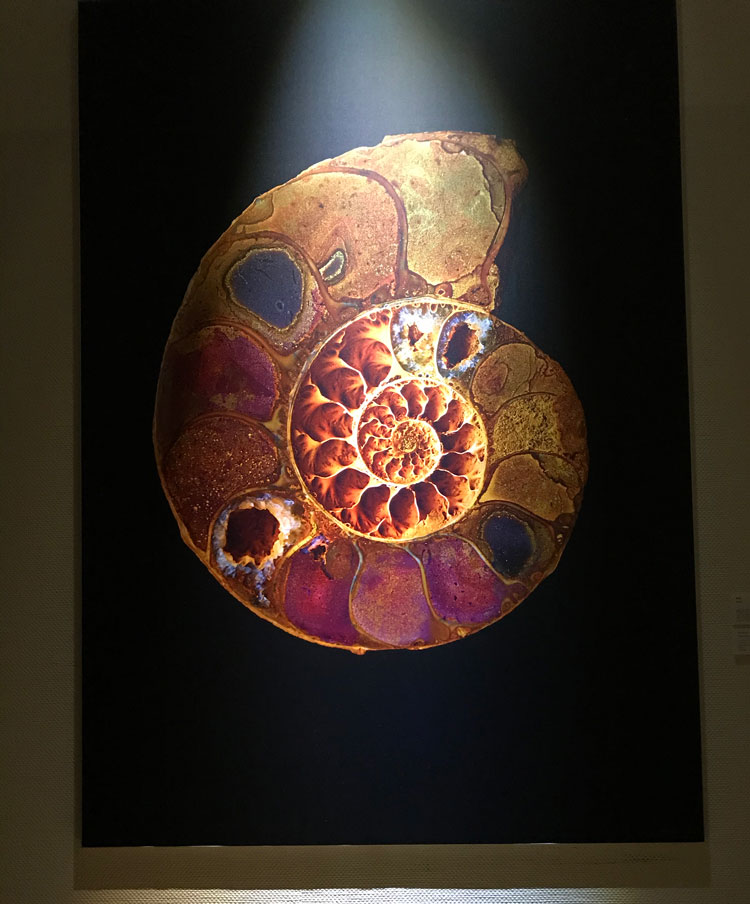 At Kitakyushu Museum of Natural History and Human History, the artist Yoichi Ochiai uses the latest technology to explore the wonder of the archaic objects in the museum’s collection. Mesmerised by the mysteriousness and beauty of the artefacts, Ochiai shot high-resolution images of objects such as a desmoceras ammonite from 110m years ago and an iron fish hook from the sixth century.

At the Kitakyushu Innovation Gallery, there is a collaborative project between the academic Hiroya Tanaka’s university laboratory and the think lab Metacity, the latter led by the concept designer Ryuta Aoki. Titled Bio Sculpture (2021) and installed in the gallery’s outdoor space, it includes an ecosystem that transplants soil components collected from the forest into the urban environment of Kitakyushu. 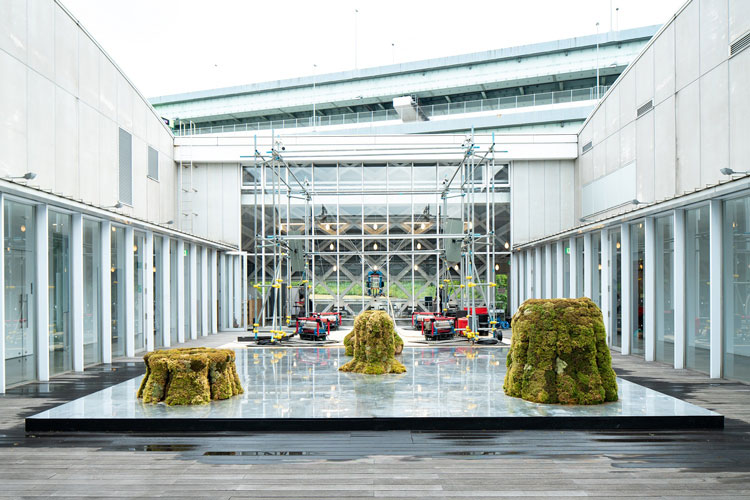 Using a 30m x 30m 3D printer from Tanaka’s laboratory at Keio University in Yokohama, the team printed out Bio Sculpture in the form of a large receptacle, and it is hoped that the ecological materials, such as soil and rice husks, will adjust to the local environment as time goes on. Around the surface of the printed sculpture, the team planted different types of moss, using computer programming to determine the layout, depending on whether the moss requires sun or shade. The team’s intention was to let the computer calculate how each moss will grow in certain environments, rather than allowing human intervention, and, eventually, the moss may spread organically into the territory of other moss. Faced with climate change and continuous natural calamities around the world, the team’s aim is to explore the possibility of another form of ecosystem using 3D printing and digital technology.

While these artistic expressions and research touch on global climate change and sustainable living, the works at Kitakyushu Municipal Museum of Art focus on diversity and inclusiveness. 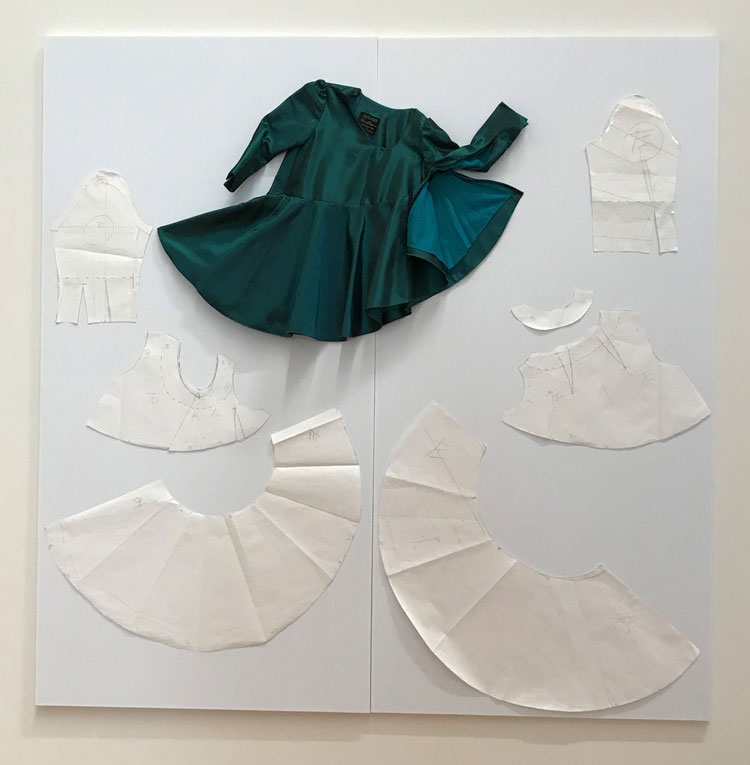 In Clothing is Wearable Medicine, the fashion designer Reiko Tsurumaru is showing clothing that fits people of any body type. After working at Givenchy couture, Tsurumaru turned to specialising in clothing for people with disabilities. She uses her unique Tsurumaru Diagramming Method, which involves measuring 46 points on the body, to design garments in which people of any body type can feel comfortable. Her attitude is that no one will be left behind. 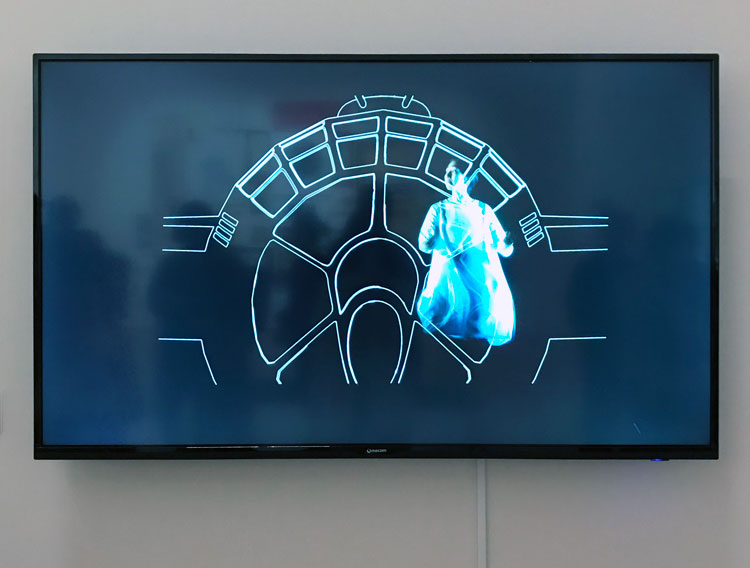 Many of the other artists exhibiting at the museum have a disability. The London-based Japanese performance artist Chisato Minamimura lost her hearing at the age of seven months and since then has lived in soundless world. Her work Scored in Silence (2019) digitises her body performance and the recordings of the voices of deaf hibakusha victims who survived the horror and devastation of the 1945 atomic bombings of Hiroshima and Nagasaki. It is a compelling expression of tragic history unveiled by an artist who can’t hear “voices”, but depends on the visual world.

We know that humans are consuming the planet’s resources, but this festival shows that art can give us an idea of how to compromise on economic growth and focus on the quality of life for all humankind, living in harmony with our planet’s ecosystem.