Patrick Staff: The Prince of Homburg

Patrick Staff: The Prince of Homburg

Through video installation, sculpture and printmaking, Staff uses a play from 1810 as a vehicle to explore queerness and sexual identity in today’s world 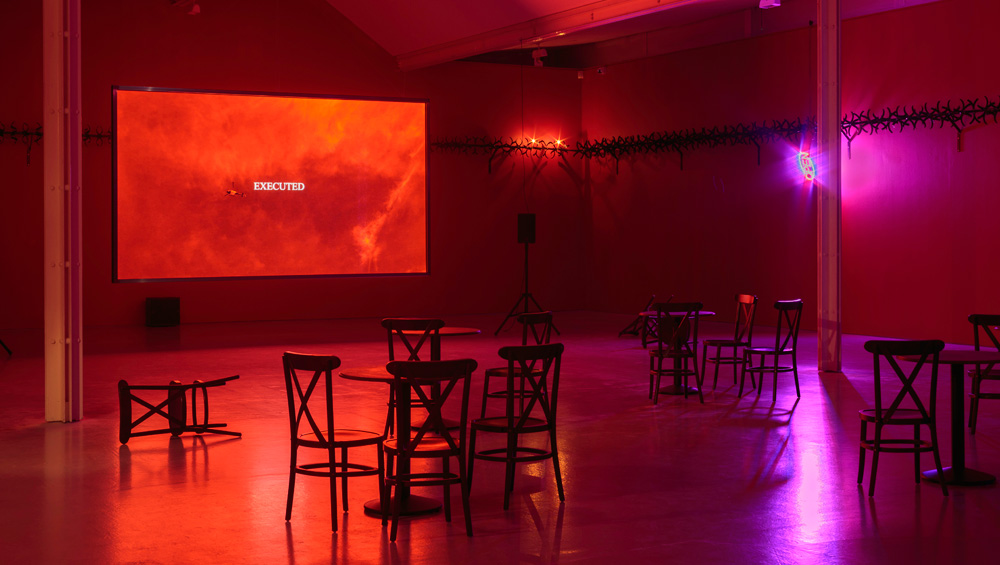 In the 1810 play by Heinrich von Kleist, The Prince of Homburg appears sleepwalking in royal gardens following a bloody battle, wavering in and out of reality and fantasy, consciousness and unconsciousness. In his extreme exhaustion, he dares to dream, even as he remains within the confines of the authoritative structures around him. In dreaming, he is defiant and victorious. Confused about what is real and what is imaginary, he finds the ingenuity to win on the battlefield – only to be sentenced to death on waking, because, in acting in this way, he has defied his superiors.

In Patrick Staff’s new exhibition at Dundee Contemporary Arts, which interprets Kleist’s play through video installation, sculpture and printmaking, the themes of liberation and resistance to authoritative structures are explored in inventive, imaginative and innovative ways, bringing in contemporary thought about queerness and the ways in which sexuality and identity are measured, disciplined and controlled in the world around us. This prince is at battle, and although he wins in his dreams, the structures around him remain harsh and lethal despite his ingenuity of thought and action. So the sleep-deprived, victorious and yet doomed prince comes to symbolise queer martyrdom and political dissidence itself. It is his strange and contradictory transcendence into an anarchic state, and the bravery he shows in spite of the absurdity he is caught in, that makes this prince truly heroic. 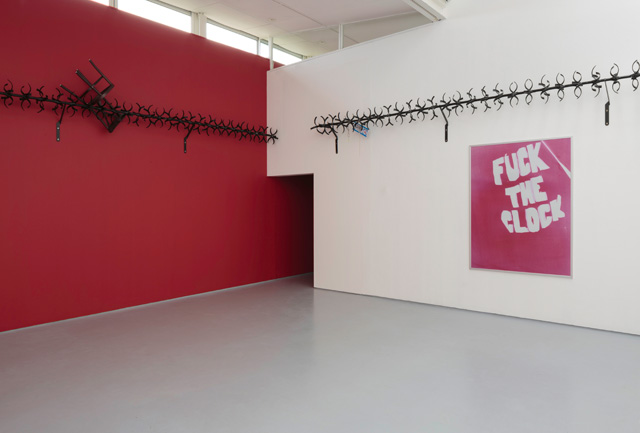 On walking into the first gallery, the atmosphere is at once galvanising and threatening. The walls are painted a bright, blood red, and Staff’s sculpture, The Appetite – which resembles an expensive form of black barbed wire – is installed across the top of each wall. Evocative, everyday objects – clothes, flowers, chairs and lights – are caught on some of the glossy black hooks, indicating either thwarted or hard-won escapes – though the direction of escape is unclear. With images of detention centres in the US and in Europe constantly in the news, this aspect of the installation is haunting and timely; the structures of discipline and punishment related to the body and identity are prescient and ever-relevant in many ways. On the walls, photogram prints, developed by hand in complete darkness, show striking images of knives, blades, chains and a single glove. 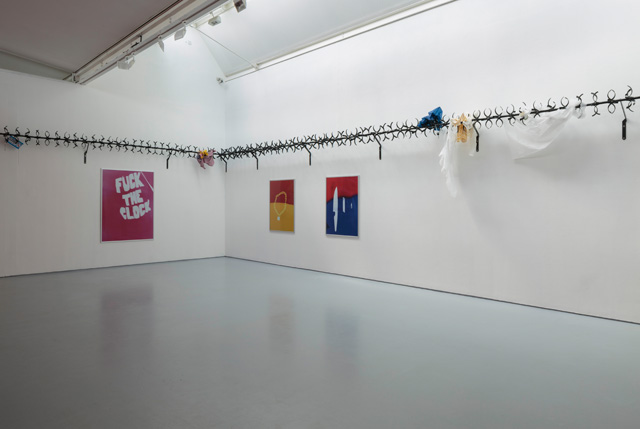 Even the symbolism found in this room, however, is ambiguous: while the barbed wire evokes images of prison and punishment, the red walls and the glossy plastic of The Appetite, along with the chains, weapons and glove also recall red-light districts and sexual sub-cultures, erotic transgressions and libertinism, some sort of freedom. In any conversation about discipline and punishment, and the implications for wandering individuals, of course the ambiguity and the opportunities to reclaim tools of oppression for individual liberation are important and compelling. Audiences are either oppressed or complicit in the oppression of others here, but they are also inevitably blind to their specific role. There is promise, in that confusion, of play and subversion. Indeed, Staff manages to put audience members in both roles, into all roles, breaking down such social and sexual barriers by installing these garish, shining borders in the open space of the gallery. 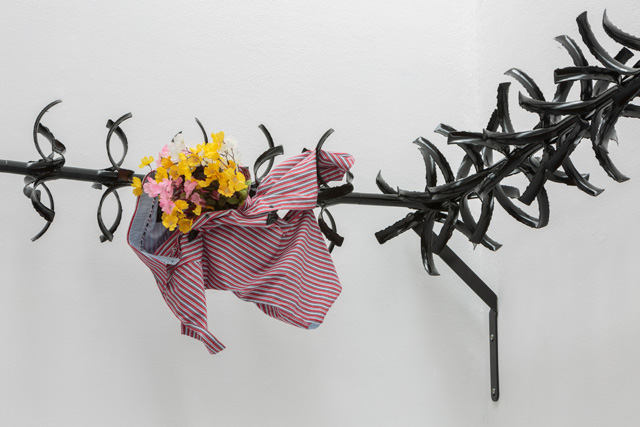 The absurdity of “the border”, in divisions between various “types” of sexual orientation – in the ordering of people according to their superficial identities or their received roles – becomes glaringly obvious when we are all arbitrarily trapped in the ever-ambiguous no man’s land of this battle, simply by virtue of going to an exhibition. We are placed somewhere impossible; we are also placed in the prince’s mind, which is at once doomed and liberated. Queer desire – to stay or to leave, to endure or to enjoy – becomes confused and chaotic in these structures where it is controlled by anything other than the free individual. Only when the prince succumbs to overwhelming exhaustion from this battle, this absurdity, does he find a vision of another way, a flicker of true freedom.

These ideas of oppression, compartmentalisation, voyeurism – and the desire for freedom from them and through them – follow us through to the next gallery, which is in darkness, with only the light from the huge projection revealing other audience members and chairs to sit on. The jagged shapes of The Appetite continue to surround us and contain the exhibition with the shapes of oppression. Desire contains us, but can we be contained? 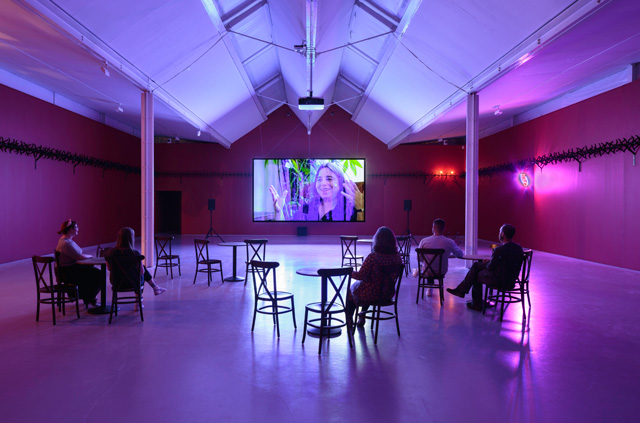 Resembling a sort of collage, the film cuts together a narration of Kleist’s play with interviews, reflections, hand-painted animation, song and found footage. In the “daytime” sequences, these fragments – intercut with bright flashes of the sun and sky, streets and words – allow for the interacting voices of modern discourse about queer and trans identity, and its relation to love, desire and violence. Macy Rodman talks about her song Lazy Girl and the extreme fatigue she experienced during the use of hormone therapy for transitioning; transgender activist Debra Soshoux reflects on the force of emotion and physical feeling in relation to our bodies, as well as recounting being asked to offer a definition of “the law” while serving in the US navy. Che Gossett, meanwhile, discusses the conceptual connections between physical, state-operated modes of punishment (such as the prison system) and violence against marginalised and queer bodies through socialised and toxic ideas of guilt, shame and desire. Sarah Schulman talks about the political significance of death and the potential ways in which funerals may become sites of political subversion. These “daytime” sequences are further collaged with “nighttime” sequences, which are narrated by genderqueer writer Johanna Hedva, who plays both the narrator and the Prince, and so guides the overall narrative of the original play. We see gardens at night, high-visibility clothing and neon signs; these visions are confused and ambiguous, resembling a semiconscious state, and providing further dislocation and dissociation. These collaged, colliding sequences subvert the original narrative and yet, in so doing, underline its central point. 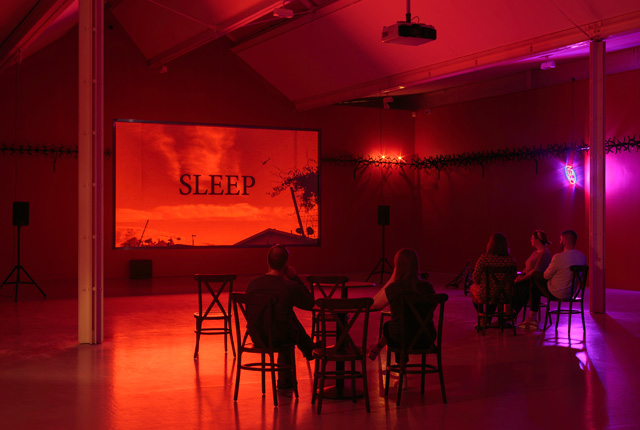 While nightmarish, there is something ultimately joyful and glorious about Staff’s exploration of The Prince of Homburg. Our prince dies, and yet he dreams. He dreams, and yet he dies. A young Hamlet, or an Icarus, or Narcissus – the character is all of these and more. He fades into a place – in his own mind – in which the barriers of reality and his own physical presence in it fall away to reveal a transcendent victory.

In revelling here, and yet being brilliantly aware of the truly harsh realities in which the prince (and we) exist, Staff also marks a beautiful and breathtaking victory that, as audience members, we can only applaud. Staff reveals the prison that we are all absurdly stuck in to some degree, the continuous and fatiguing existential crises that seem the mark of the modern political climate, and shows us what victory looks like within, through – and perhaps even beyond – those confines, even (and especially) at our most downtrodden and exhausted. Here is an invitation to dream, to succumb and to reclaim the tools of our own oppression in new artful ways. Here, too, is a chance to reflect on the true surrealism and absurdity around which everyday human pain pivots, the arbitrariness of the roles in which we put each other.