The walls of this exhibition tremble with the vibrant blooms of summer days. Gardens have inspired artists and influenced painting, from impressionism to the avant garde and beyond. Here, curator William Robinson talks about the exhibition and Monet’s erudite passion for gardening 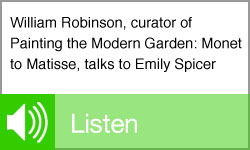 Painting the Modern Garden brings to light the unexpected significance of the garden in modern European art. And no artist was more an enthusiast than Claude Monet (1840–1926). He not only painted his gardens, but also put a huge amount of effort into creating them, and possessed such a knowledge of horticulture that he became famous as much for his green fingers as for his verdant canvases.

While not surpassed in his passion, or knowledge of gardens, he was not alone in his enthusiasm for painting them. Vincent van Gogh, Wassily Kandinsky, Pierre Bonnard and Emil Nolde all join Monet in this vast exhibition, which celebrates form and colour, daisies and dahlias. But more than just comparing the aesthetic properties of plants and paint, Painting the Modern Garden delves into the social significance of the garden in 19th- and 20th-century Europe, from its roots as a bourgeois pastime to its embodiment of peace and harmony in an increasingly industrialised and war-wracked world.

Monet’s Grandes Décorations, his huge paintings of his carefully planted water garden, offered the artist both a retreat from the war that raged around him (he could hear the shells from his home), and a means of fighting back in the only way that he could. When almost everyone else in the village of Giverny had fled, Monet stayed resolutely rooted to his home, refusing to leave and refusing to give up painting in what he considered his patriotic duty. The artist was determined, it seems, to see culture and beauty triumph over violence and death. The garden at Giverny became an oasis in the chaos. “If those savages must kill me,” he wrote, “it will be in the middle of my canvases, in front of all my life’s work.”

The Agapanthus triptych, which Monet started in 1915 and worked on until his death, forms the crowning glory of this exhibition. The three paintings were sold separately to the Cleveland Museum of Art, the Saint Louis Art Museum and the Nelson-Atkins Museum of Art in Kansas City and have been reunited here to form an immersive 42ft wall of shimmering water lilies.

I spoke to curator William Robinson about this expansive exhibition and Monet’s erudite passion for gardening. 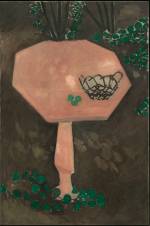