Nicolás Herrera: ‘this mural is about life’

Nicolás Herrera: ‘this mural is about life’

Studio International travelled to Cuenca, Ecuador, to talk to Nicolás Herrera about his new work, El Jardín de las Mujeres, or The Garden of Women, a sculptural mural at La Casa de la Provincia, where it is permanently installed. It was unveiled to the public last Tuesday (25 October). It is the largest mural in Ecuador, measuring 13.4 by 3.64 metres.

The work pays homage to women from Cuenca and the world. This mural, he explains, “is about life”, and his idea was to create a great garden where every being was included. It is a large composition with more than 40 elements. Beginning on the left with a map of Cuenca located on the trunk of a large tree, this ecological journey takes us through love, justice that gives liberty, a tree of life, birds representing freedom, a traditional “Ayahuma” (a mythological figure, protector of nature and the spirits of the mountains), a musician in full festive attire, a set of figures representing race, abstract mythological figures from the mind’s eye. At the end, we have Las Cholas Cuencanas, three female figures depicted in traditional dress, representing Cuenca, a city of flowers, life, pride and tradition that has embraced the world through its arts, its architecture and its multi-ethnic people.

Herrera, a native of the north Ecuador, from a town called Los Andes in El Carchi, now lives and works in Ibarra, where he financed the building of a museum by selling one painting at a time to collectors worldwide. He has won various awards of recognition and had numerous exhibitions in his native Ecuador, as well as exhibitions in the US and Europe. His work is currently part of a group show in Germany at the Lappersdorfer cultural and community centre Aurelium, entitled Magia Silvestre (Wild Magic), a collection of magical forests and wildlife. His museum, built without any support from the local government, sits on top of a hill, with expansive views of Ibarra (named the “white city” for the colour of its buildings), and Lake Yahuarcocha (“lake of blood” – where the Spanish massacred the natives). It is open to the public and visitors may even get a personal tour by the artist.

Most of Herrera’s work lives between reality and abstraction, good and evil, the past and the future. His work is a fusion of abstract, realist, allegorical, magical, futuristic and robotic forms, sparking the imagination of the viewer. His realistic images, including nudes and self-portraits, are embraced by armoured forms, as if protecting them or showcasing oppression of the species.

His work is in constant motion. He represents the mythology and the magic from his Andean culture, the richness of the Amazon, the splendour of life. He is a master of light, creating colourful and fantastical paintings, grounded in the land and folklore from his childhood. But his work goes beyond folklore: his is a voice of the times, and through this latest mural we can appreciate his prowess as a sculptor and painter, a fearless artist dedicated to a greater cause, the good of the world.

The mural is installed in the Spanish-style La Casa de la Provincia (the house of the province), previously a convent named Convento del Buen Pastor (Convent of the Good Shepherd), beautifully restored by local architect Salvador Astudillo. It is a palatial white structure, originally made using terracruda or adobe, with two courtyards where weekly art events take place.

This is a wonderful site for the work, but the mural cries out to be located outdoors, in a park or plaza, to better appreciate the scale of Herrera’s masterpiece honoring women.

Interview and film by MIGUEL BENAVIDES 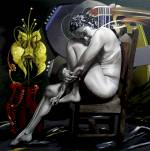 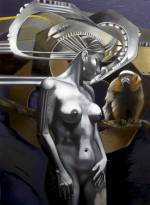 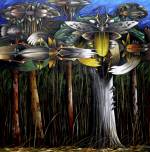