New Orleans plays host to 58 artists from around the world – including Theaster Gates, Carrie Mae Weems, Agus Suwage and Jean-Michel Basquiat, as well as many less familiar names – for Prospect.3, whose dominant theme is race and identity

The New Orleans biennial Prospect.3 officially opened to the public on 25 October under sparkling blue skies with a ribbon-cutting ceremony in Washington Square Park. Located on Elysian Fields Avenue, one of the many fanciful names that demarcate this fabled city of dreams on the Mississippi, the celebration included a traditional New Orleans “second-line parade” – a laughing, twirling crowd drawn by a brass band from the park through neighbourhood streets and back – with lunch afterwards for all spectators, a gesture of southern hospitality that was also traditional. Underscoring that generosity, most of the biennial’s 18 venues are free, with the exception of the museums. Unfortunately, the Contemporary Arts Center New Orleans (CACNO), the Ogden Museum of Southern Art, and the New Orleans Museum of Art (NOMA) are hosting the lion’s share of the works – which somewhat undermines the value of the largesse. This, no doubt, is due to the reality of budgetary limits: the two former biennials, in particular the extraordinary Prospect.1, were blemished by cost overruns. Prospect.3 is adamant about staying in the black, said executive director Brooke Davis Anderson, adding that future Prospects will shift to a triennial mode to enable them to be more sustainable.

Called Notes for Now, this far-ranging, ambitious edition’s dominant theme is a nuanced, polyphonic conversation about race, place, identity, migration and history, adding its voices to a continuing and often uneasy discourse taking place in New Orleans, in America and the world. Its artistic director is Franklin Sirmans, department head and curator of contemporary art at the Los Angeles County Museum of Art (LACMA). On view in 18 venues throughout the city are 58 artists from around the world, anchored by some marquee names – Theaster Gates, Carrie Mae Weems, Jean-Michel Basquiat, Kerry James Marshall, Shigeru Ban, Camille Henrot – but with many more who are less familiar, which is always exciting.

If we do the numbers, the demographics are also not quite the usual breakdown for an international biennial. More than half the participants are based in the US, but diverse in heritage and weighted heavily – even unprecedentedly – towards people of colour. Almost 40% are women, better than most such international shows. Nine artists are from New Orleans itself, in acknowledgment of local talent that previous Prospect biennials have also embraced. The remainder are largely from the Caribbean, South America, the Middle East, Africa and Asia. Only four artists are listed as being from Europe: French artist Henrot, who now lives and works mostly in New York; Piero Golia, born in Naples but based in Los Angeles; Hew Locke, son of a Guyanese sculptor and raised in Guyana, but now based in south London; and Paul Gauguin, whose best-known paintings portray a land far, far away from his native France. These designations can be deceptive, since several artists, such as Golia, are indicated by their country of birth even though they spend much of their time elsewhere, but that is another topic of the biennial: where are any of us actually from these days? The conclusion of Sirman’s written remarks introducing each of Prospect.3’s venues, taken from Gauguin’s inscription from one of his most famous paintings, is the refrain, “Where do we come from? What are we? Where are we going?,” questions Sirman asks all of us to consider. In doing so, we should also consider the universality that radiates from the specificity of the local.

Many of the works are terrific and play off each other well, their themes reiterated like a call and response. They span a full spectrum of disciplines, materials and moods, from the sober to the spectacular, such as Will Ryman’s giant red roses with disconcertingly sharp thorns and Tavares Strachan’s immense, pink neon-scripted, brilliantly illuminated sign that says “You belong here”, as both statement and question, planted on a barge that travelled up and down the Mississippi during the opening weekend.

Locke’s postcolonial critique, The Nameless (2010), sketches striking mythological and other imagined figures directly on to the walls of one room of the Newcomb Art Gallery using tiny black beads strung on cord, recalling the endless strings of Mardi Gras bling. Also at Newcomb are Jamaican artist Ebony G Patterson and her dazzling, vividly coloured, metamorphic, mixed media floral works on paper that suggest beaded textiles, nonagenarian Monir Farmanfarmaian, whose faceted, mirrored sculptures shape modernist geometric forms out of Persian designs, melding her Iranian heritage with that of her adopted city, New York and Andrea Fraser, with her tall mound of discarded costumes collected from Rio’s Carnevale, remnants of their wearers’ dreams.

Other works of note include Brooklyner Lisa Sigal’s newest site-specific installation, Home Court Crawl, in outlier areas of the city in collaboration with playwright Suzan-Lori Parks, focusing on vacant, deteriorating houses; New Orleans-based Sophie T Lvoff’s crystalline photographs of its environs, folding the old into the new with a clear but poetic eye; Beijing artist Yun-Fei Ji’s The Peach Blossom, an unfurling narrative scroll picturing nature’s upheavals, a constant theme; Yogyakarta-based Agus Suwage’s enormous self-portrait made of recycled cans and dotted with a row of tiny speakers; LA artist Glenn Kaino’s Tank, an extensive installation of aquariums in which remnants of armoured tanks (pun intended) have been submerged as the substrata for variant species of coral contending for ecological dominance; and Uganda-born, London-based artist Zarina Bhimji’s Waiting, a lingering, unexpectedly beautiful video of a Kenyan sisal factory, all at the CACNO.

New York/Houston-based Mary Ellen Carroll’s ambitious, carefully researched Public Utility 2.0, at the nearby AIA New Orleans, hopes to route super Wi-Fi internet access to underserved parts of New Orleans, taking on the rigmarole of city policies and politics. At the Joan Mitchell Center Studios is Amsterdam-based Surinamese artist Remy Jungerman, his syncretic, evocative, mixed-media wall installations combining painting and sculpture, de Stijl and Winti, a form of Afro-Surinamese spiritualism, turning modernist tropes into African altarpieces. At Longue Vue House & Gardens, Henrot’s 2013 video Grosse Fatigue (Dead Tired) is another winner, a rapid-fire, quirky, entertaining, enrapturing 13-minute presentation of her theory of creation, as is José Antonio Vega Macotela’s extraordinary project, Time Divisa (2006-10) in which he collaborated with inmates of Mexico City’s notorious Santa Martha Acatitla prison in a series of 365 “time exchanges”, in which tasks are carried out reciprocally between them.

Four of the highlights of Prospect.3 are the electrifying film, The Living Need Light, And the Dead Need Music by The Propeller Group (Phunam and Tuan Andrew Nguyen from Saigon, Matt Lucero from Los Angeles) with New Yorker Christopher Myers at the UNO St Claude Art Gallery; Silent Parade … or The Soul Rebel’s Band vs Robert E Lee, a video by Peruvian-born William Cordova in which a local band serenades – or challenges – a statue of Robert E Lee from a rooftop shown at Dillard University; the exuberant, immersive two-channel video at the CACNO by David Zink Yi, another Peruvian artist, that explores Afro-Cuban music and culture, remixing the visual and the aural; and Kwaku Ananse (2013), a film by Akosua Adoma Owusu, an American of Ghanian descent, presented with the compelling simplicity of a fable in which a young woman returns home to attend her father’s funeral, then goes into the wild in search of existential meaning. All four are expansive, riveting embodiments of the biennial’s central themes, twisting together ritual and music, including the jazz funeral and its far-flung equivalents, into a complex interrogation of identity, history, and place.

Two other powerful works, Weems’s stunning, red-curtained, mixed-media installation, a magic show based on holograms called Lincoln, Lonnie and Me – A Story in 5 Parts (2012), at the McKenna Museum of African American Art, and Fraser’s masterful performance at NOMA reenacting a New Orleans city council hearing from 1991 probe racism, both subtle and overt, in vivid, unsettling narratives.

Notes for Now is a biennial in which an American vernacular meets the world in an exhilarating global exchange that addresses complex issues of all kinds about the human condition, it tells us that elsewhere is here, here is elsewhere. 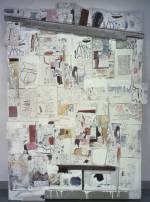 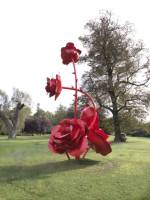 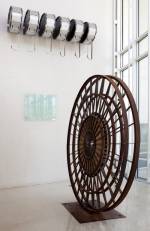