If there were one word to describe Carrie Mae Weems’s art in the exhibition at the Guggenheim Museum, it would be “poetic”. This is true not only because of the extensive use of poetic-like text that Weems incorporates into her work, but also because her thematic image/text units conform to the ancient definition of poetics derived from Aristotle, for whom a poetic work pertained to a work of theatrical art that operated by means of language, rhythm, and melody.

Melody aside, other elements of the Aristotelian poetics/aesthetic paradigm figure prominently in Weems’s creations. Apart from language permeating many photographic series, and rhythm, which is found in all of them by virtue of the very nature of the serial making of images and their display, chief among the aesthetic elements outlined by Aristotle were beauty, theatricality and catharsis. This classical prototype defines Weems’s work.

Beauty is paramount for Weems. Her first officially “artistic” images from the Family Pictures and Stories series taken in the late 1970s/early 80s are focused, symmetrical and clearly framed; her subjects are dignified and happy, even as they go about their daily business of caring for children or working. Weems’s famous image Mirror, Mirror from the series Ain’t Jokin’ (1987-88) partly explains the drive that led the photographer to portray her subjects as beautiful beings who live their lives to the full. The photograph shows a black woman holding up a square picture frame to her face. She is looking to the side in such a way that the profile of her face is visible to us. On the other side of the frame stands a “fairy,” a white woman veiled in white gauze. The caption reads: “Looking into the mirror, the black woman asked: ‘Mirror, mirror on the wall, who’s the finest of them all?’ The mirror says: ‘Snow White, you black bitch, and don’t you forget it!!!’”

As a black female photographer who addresses issues of social justice and racial inequality in her work, Weems reveals in this image her modus operandi in relation to beauty. She affirms that black people do not have adequate representational models in a predominantly white culture. They cannot recognise themselves in any of their alter-ego representations sanctioned by the dominant culture because they have always been pictured by others, who either demeaned or misrepresented them. Through choosing to display her subjects’ dignity and grace, Weems found her mission in giving the black people their proper face. In Black Woman with Chicken and Black Man Holding a Watermelon, made at the same time as Mirror, Mirror, Weems transformed stereotypically contemptuous renderings of black people into icons of endurance and personal power.

Performativity is another leading element of Weems’s art. Whereas in her earlier images, she photographed people who are close to her (her family) or like her (black people in general), in her well-known Kitchen Table Series (1990), Weems inserted herself into her pictures, not only staging the action around the kitchen table, but also making her own figure its pivoting point. In this series, the centre stage is occupied by a long table with a bright lamp over it. Weems sits, stands, applies makeup, converses, drinks. Sometimes she is alone, but more often she is seen interacting with children, friends or lovers. There are objects on the table, but they do not seem to matter much. What matters is the artist’s presence and the action that unfolds around it. In his catalogue article, Franklin Sirmans noted that performance has always been important to Weems’s art and her personality. When she was 17, Weems joined Anna Halprin’s Dancers’ Workshop in San Francisco. In 1989, she posed personally for a photograph that impersonated an African-American singer (Ode to Affirmative Action, 1989). In the Kitchen Table Series, Weems explored this technique to its full by inhabiting the frame in every image. Quite apart from the issues of mastery and control implied in this repeated and powerful presence, there is also the question of taking full responsibility for the image of black womanhood that she was creating, and for emphasising the importance a particular, subjective point of view in the seeming “objectivity” of photographic production: “… Back in 1985, 86, 87, young women really had no sense of how to image themselves. And black women had not been imaged in a way that I could appreciate, or admire … I started working on this series using that space, I think, in a way that any number of women have importantly used interior spaces, the home space, the domestic space in order to craft their image-making.”1 The reference to bodily presence (or its absence, pointedly recalled by the photographic trace) is especially important to Weems. In Slow Fade to Black (2010-11), her latest work dedicated to performance at the exhibition, Weems shows images of Josephine Baker, Lena Horne, and Katherine Dunham, three famous black women who distinguished themselves in various types of performance – some in singing, some in acting – but all of them danced.

Finally, catharsis, the emotional charge, plays a defining role in the artist’s oeuvre. The tragic theme of the oppression of the black people by the whites in America runs through the entirety of Weems’s artistic projects and inspires her artistic mission. In the exhibition, this theme reaches its apex in the series From Here I Saw What Happened and I Cried (1995-1996), addressing the history of slavery and the humiliation of America’s black population. For this powerful work, Weems used historic documentary photographs, which represented African Americans as scientific subjects, anthropological curiosities, sexually aberrant types, and otherwise second-rate human material used for study of deviations and aberrations. The artist enlarged these images to one standard size and tinted the prints in red, the colour of blood. She also coined the labels for them, describing the subjects poetically in one word or entire stanzas, thereby redirecting the positivistic drive of original photographs. Framed on each end by an image of a beautiful Mangbetu queen captured in profile with her head turned towards the photographs, the blazing red display of “negroid types”, “drivers”, “mamas” and “riders and men of letters” becomes a damning indictment against a culture that demoralised and subjugated “the other”.

Apart from clearly incriminatory tone of From Here I Saw What Happened and I Cried, cathartic charge also fills those images that show places that are seemingly empty, devoid of people, save for architecture and sometimes the figure of the artist herself. These images are records of Weems’s travels in the early 90s to such places as the Sea Islands off the coasts of Georgia and South Carolina, Western Ghana and Senegal, where the artist went “looking for Africa”. Like her accusatory repurposing of the scientific archive of western culture, and unlike her Kitchen Table Series, they are haunted by absence, but a peculiar kind of absence that carries within itself a strange, spectral presence of the traces of life that once flowered in these abandoned landscapes. Weems mourns this lost presence and her inability to bring it back to life. This tragic melancholy haunts many of her travel photographs, including Dreaming in Cuba (2002), The Louisiana Project (2003), Roaming (2006), and the Museum Series (2007-present), which are also completely devoid of people, save for the lonely artist who stands with her back turned towards us, lost in the enormity of her surroundings.

Carrie Mae Weems: Three Decades of Photography and Video is organised by the Frist Centre for the Visual Arts from Nashville, Tennessee, and curated there by Kathryn Delmez. The installation at the Guggenheim Museum has been arranged by senior curator of photography Jennifer Blessing and assistant curator Susan Thompson. Most of the exhibition’s 120 works are photographs accompanied by texts. There are also four videos, three of which are displayed in the galleries and one is screened in the museum’s New Media Theatre. In addition, in April the museum plans an ambitious range of public and educational programmes in conjunction with the exhibition, which will comprise talks and performances of well-known musicians, artists and public figures.

1. Carrie Mae Weems, lecture at the Sackler Centre, Brooklyn Museum, 24 January 2009, http://www.youtube.com/watch?v=WabrgaaRTj8. Quoted in A World of Her Own: Carrie Mae Weems and Performance by Franklin Sirmans. In: Carrie Mae Weems, published by Frist Centre for the Visual Arts in association with Yale University Press, New Haven and London, 2012, pages 42-53 and 47. 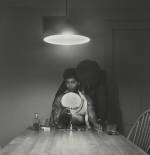 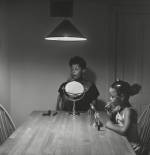 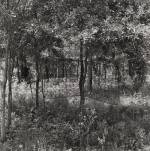 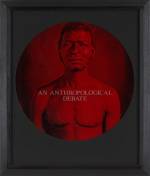 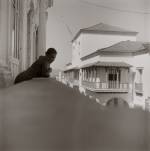 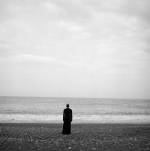 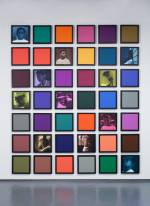