The celebrated rock musician John Mellencamp is also a painter of note, his work the subject of a survey of 40 oil paintings from 1991-2013 at the Butler Institute of American Art in Youngstown, Ohio, at its Trumbull County branch from 3 November 2013 to 12 January 2014. The show will then travel to the Museum of Art in DeLand, Florida in mid-October 2014.  Before the opening of the exhibition, Mellencamp talked to Lilly Wei. The following are edited excerpts from the conversation.

Lilly Wei: You’ve had two museum shows of your paintings recently, the first at the Tennessee State Museum in Nashville last year and now this one at the Butler. Would you talk a little about your painting? Although less widely known than your music, it’s not a new pursuit, is it?

John Mellencamp: No, I’ve been painting for a long time. My mother, who had five kids, was a painter, and I grew up looking at her paintings. They weren’t very good – with five kids, she could only paint for an hour or so at a time – but she loved painting and she let me use her materials. I was amazed by the paint. I loved the smell of it and what you could do with it, although nobody can just pick up a brush and know how to paint.

LW: You have said that you were undecided about your future plans when you first came to New York.

JM: When I graduated from junior college, I went to New York to look into the art scene. I was 21 years old and wanted to be an artist, but also considered music, being a dancer on Broadway –or a street fighter. I went to the Art Students League to see about taking classes, but the same day, I got a record deal – back in the early 70s, everyone was in a band. I didn’t have any money so it wasn’t hard to make the choice between paying for studying art with money I didn’t have and getting paid. I was young, I’d go back to painting, I said. And I’d have some money then. I did go back, but not until many years later, in 1988. I figure at 62, I have a lot of catching up to do in my painting to get where I’d like to be.

LW: Whom did you study with at the Art Students League when you went back?

JM: David Leffel, a wonderful painter who taught me everything I know about painting, about using oil, about painting dark to light, about brushwork. He painted portraits and taught me the techniques of the Old Masters. David is very formal and there were so many rules. I never really mastered all those rules, but I was able to take some and try to find my own voice using them. It was like writing songs. When I started out, I had a record deal after writing only three songs so my songwriting grew up in public. I was in Miami, at a studio, and there were the Eagles, recording Hotel California, and I asked myself, how do I compete with that? And painting is the same thing. I walk into a museum and ask, why am I wasting my time since these are so beautiful? But then I think there is beauty in all kinds of things, including the grotesque. I’m lucky that I can speak in song and talk plainly to people, and I think I can do that in painting, too. I don’t know about the painting yet, but I am fairly sure I can do that in song.

LW: Looking at your work, it tends towards the expressive, the narratives weighty, with a palette and presence that reflect that of the German Expressionists and artists such as Jean-Michel Basquiat. To me, your single figures seem surrounded by solitude, somewhat distorted, with an air of quiet desperation, often staring unblinkingly at the viewer.

JM: German Expressionism to me is grotesquely beautiful. I like the combination of the grotesque and the beautiful. Artists who have had a strong influence on me include Max Beckmann, Chaim Soutine, Jack Levine and Walt Kuhn.

LW: You seem to have a particular affinity to Levine. Were you drawn to his critique of American society? His satire?

JM: I’ve looked at a lot of Levine paintings. I remember when I first saw his work. I looked at them and wondered how to put my own spin on them. I own about a half dozen, including the one of the famous Black and White Ball given by Truman Capote at the Plaza in 1966. It’s huge.

LW: And you have an art collection?

JM: One of the things I did when I had a little change in my pocket was to buy art. I’ve been buying art for more than 30 years.

LW: Do your songwriting and your painting mix?

JM: Sometimes. I have hundreds of paintings in my basement getting mouldy and, one day, going through them, I pulled out a painting called Save Some Time to Dream and a song came out of that.

LW: Do you only paint figures?

JM: Yes, but I’m going to branch out and have them actually doing things.

LW: Are your subjects usually people you know?

JM: Some are real people but many are imagined. The painting, Scooter, for instance, is a real person. Scooter has worked for me since he graduated from college and literally takes care of me. He suffers from tremendous migraines. I painted the picture in about an hour one day to cheer him up. I said: “Is this how you feel?” And it was a joke in a way, but everyone seems to respond to it. R.O.C.K in the U.S.A was a song that began as a joke and became No. 1 in the charts.

LW: What made you decide to show your paintings publicly?

JM: Bob Dylan, looking at them, suggested I show them. I said: “Why would anyone want to see these paintings?” And he said: “Well, I like them.” I know that I’m still learning and there are great paintings in the world, but Bob persuaded me. We might paint together one day – do a collaboration.

LW: You also make a lot of self-portraits. Is painting your own image taking control of it, taking it back from all those who have photographed you, with and without permission?

JM: For me, it was more practice. Since I am there, I can always be my own sitter.

JM: I use a mirror. It flips the painting so I’m always looking both ways. When I’m painting, all I care about is looking from here to here, from what I see in the mirror to what I see on the canvas. It’s not terrifying. A blank canvas is a problem to be solved. It’s just a painting; how are you going to make it more beautiful?

LW: You have often been asked about the text in your work, such as in the painting with the Grant Wood-like male figure with a puppet dangling from a wire (or a noose) at his side, and the word “Puppet” stencilled in white paint across the surface.

JM: That’s actually a guy named Trevor. He’s one of my best friends and he calls me Puppet.
My son, who goes to the Rhode Island School of Design and is a much better painter than I am, asks me the same question. He says: “Dad, why do you fuck up your paintings with writing?”

LW: Because you are a writer?

JM: Yes, and using the English language in a very plain way is my strong suit. I use words to cover my ass. I use words in my songs and in my paintings.

LW: Your text and imagery also refers to gun control, civil rights and other social and political issues, as well as personal ones. Would you talk a little about your beliefs?

JM: I’m a lefty, I support the working class and the underdog, and I think Obama could be more liberal.

LW: Would you talk about your recent painting, Gun Control? It’s a compelling image, with its greatly foreshortened figure, a white youth, writhing on the ground, a bullet hole in his chest streaming bright red blood/paint.

JM: I painted Gun Control after one of our too many massacres. But I think the discussion should go back to the 1970s when the United States decided to abolish all federal and state-run mental institutions. Why? Because they were terrible. The plan was to get rid of these places and replace them with better facilities and staff. Well, they tore down the old places, but never got around to building the better places. So our prison system became our mental institutions. If you look at the faces of all these boys between the ages of 17-25 who killed, they all look the same. They are all schizophrenics and should be in mental institutions and are not. And it’s our fault. Here’s the rub: we focus our attention on guns, but really we need to back up and take care of our people. And that includes healthcare. In the United States, we are reactive to problems, when it’s too late. Let’s get in front of the problem instead.

LW: Most of your paintings’ characters look grim, sad and very serious; hardly any of them smile.

JM: To me, happiness is something you really have to work at. It’s not our God-given right to be happy. It comes with sacrifice. It’s not free. If you are honest with yourself, if you think about the world, you’re not always saying, yeah, this is great.

LW: Your show at the Tennessee State Museum was called Nothing Like I Planned: The Art of John Mellencamp. It’s an intriguing title.

JM: Yeah, and that was the plan of my life. Every time I sat down and said I’m going to make things go this way – from having a conversation to writing a song to making a painting – it never worked out the way I planned. That’s what makes painting and songwriting so similar. I’ll sit down to write a song and I won’t have a clue what I’m going to write, not a clue, no inspiration, but more times than not I will end up with something, although it might be shit but sometimes it’s not – I’m just channelling and I say, thank you, someone is singing the song to me, telling me what to paint.

LW: What’s the difference between your studio and music practice?

JM: Painting is strictly solitary for me. When you’re in a rock band, you’re always with people. I want to be alone when I paint. It’s another kind of activity – and it is an activity. I’m on my feet eight hours a day, often much longer, when I’m painting. I’m in a painting mode right now. One thing I like about painting is that a lot of guys go out and spend hours playing golf and all they have is a scorecard to show for it, but I have a painting. Even if it’s no good, my kids will like it and I have a lot of children.

LW: The word “dream” comes up often in your work, in different ways such as Save Some
Time to Dream, the song you mentioned before, or the painting, BRMC, with the text: “Some people believe in their dreams/and some will follow their dreams/me … I just don’t pay any attention to them …”

JM: I don’t pay attention to my dreams since they can never come true, they’re too big to come true. But I still have a lot of dreams for myself, for my children, for the world. 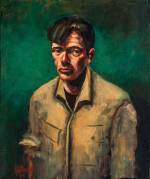 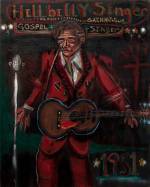 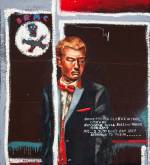 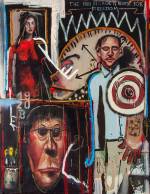 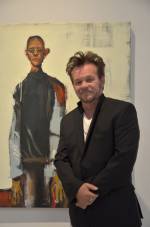