This first major British survey of Gabo’s work in more than 30 years includes paintings, drawings, architectural designs and sculpture and shows his enduring influence on architects and designers 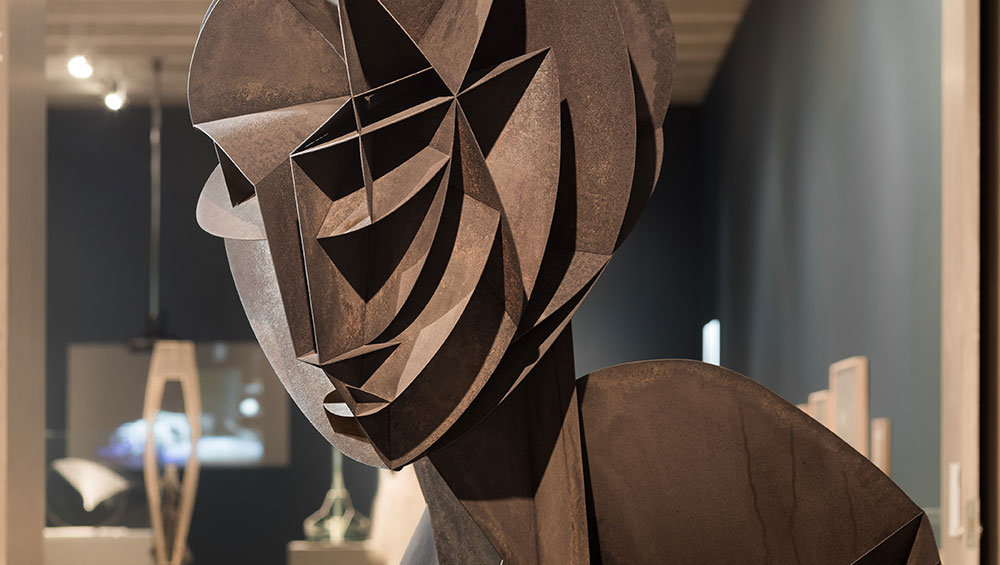 Who knows what the residents of post-Revolutionary Moscow made of The Realistic Manifesto when Naum Gabo (1890-1977) and his brother Antoine Pevsner pasted it up across the city a century ago this year. Mimicking the style of Soviet government propaganda, the radical treatise declared Gabo’s constructivist principles for art production in the modern, industrialised world. Though 5,000 copies of the poster were produced, only three have survived, and it is the artist’s personal impression that opens this expansive exhibition at Tate St Ives, the first major British survey of Gabo’s work in more than 30 years. 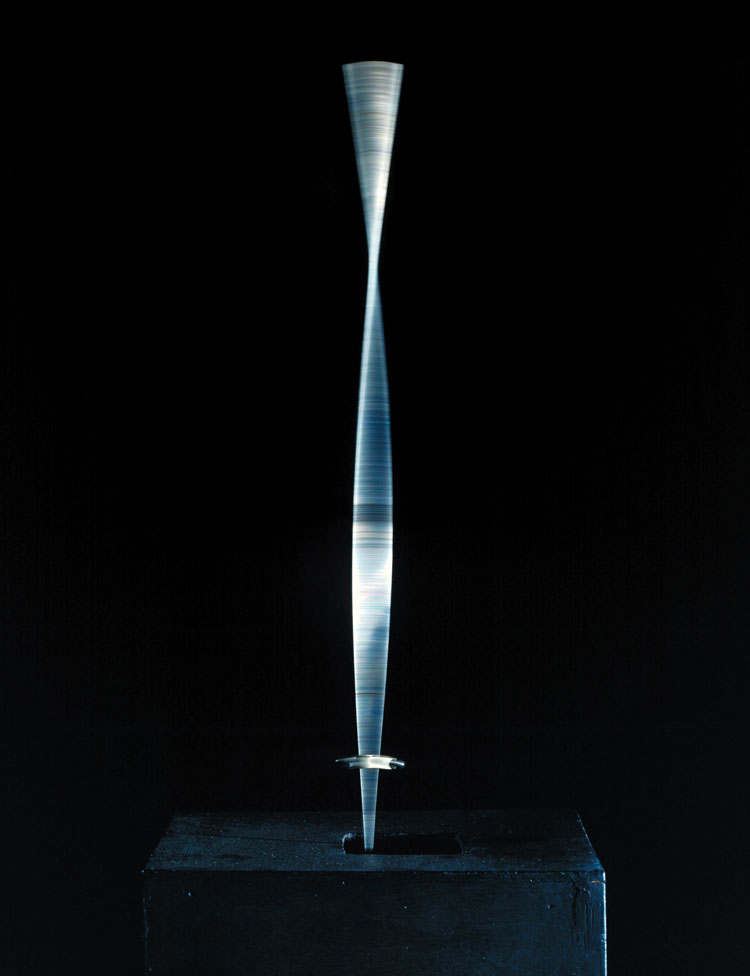 Laying out the fundamental principles of what Gabo called the “constructive idea”, his manifesto identifies space and time as essential materials for the modern artist. Indeed, by the time the text was published, Gabo had already created his famous Kinetic Construction (Standing Wave, 1919-20), which, relying on movement and time, is considered one of the world’s first kinetic sculptures. Press a button and a vertical metal rod begins to vibrate. Oscillating wildly, its movement becomes a blur, creating the illusion of an elegantly curved, three-dimensional form that quickly vanishes as the rod returns to stillness. As a neat summation of Gabo’s essential concerns, it sets the tone for much of what follows. 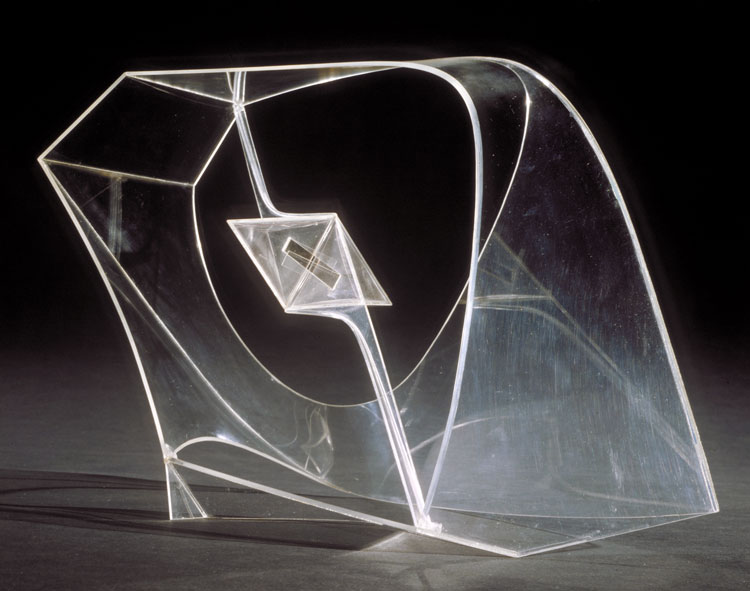 Inspired by current ideas in science, philosophy and engineering, Gabo argued that modern art, design and architecture belonged to everyday life and was central to the building of a new, progressive society. The ideal art, he maintained, was one that dissolved, becoming folded in with life itself. Accordingly, many of his sculptures, drawings and prints take the form of designs for utopian architectural projects or ambitious public monuments. Take Construction in Space: Vertical (1923-5); like an architectural model for a space-age high rise, this slender glass column with angular forms jutting from its base would not feel out of place in a modern metropolis. Indeed, despite being nearly 100 years old, many of these proposals possess a surprising contemporaneity – a testimony to the enduring influence that Gabo’s art has had on architects and designers.

Stainless steel, glass, nylon filament and other newly invented plastics were among Gabo’s favoured materials, which he employed with an elegant economy. A fine example is Column (1921-2), comprising intersecting planes of glass with white, black, red and transparent Perspex. With no moving parts, the large, glinting structure relies on viewers’ movements, seeming to shape-shift as you walk around it. It is juxtaposed with a tiny tabletop version fashioned from cellulose nitrate. This preliminary maquette is one of several experimental models for architectural structures that Gabo made, which are displayed here alongside a selection of related large-scale drawings. Revealing him as a master draughtsman, these plans for imagined buildings and unrealised municipal schemes include his 1931 curving, shell-like proposal for the Palace of Soviets, an unbuilt congress centre for Moscow. As with other works, Gabo’s design has a remarkably modern feel, anticipating the influence of organic forms on postwar architecture.

Gabo was the quintessential peripatetic modern artist; he was born in Imperial Russia, educated in Germany, was a refugee in Norway and worked alongside Bauhaus artists and architects in Berlin before coming to Britain in the 1930s. During the second world war, he became an integral member the St Ives art community in Cornwall before emigrating once more, to the United States in 1946. It is no surprise, then, to learn that many of his architectural sculptures are essentially flat-pack, designed to be dismantled and transported in a suitcase. This relates to what he called his “stereometric” method, whereby sculptural form is revealed through the relationships between interlocking structural planes, voids and edges, instead of traditional methods of manipulating solid mass. Constructed Head No 2 (1916) provides a striking example; its geometrically articulated face peers down at you with a rusty expression at the exhibition entrance.

Considering Gabo’s love of movement, it was inevitable that he would become involved with performance and so, in 1926, he began inventing futuristic sets and costumes for Sergei Diaghilev’s 1927 ballet La Chatte. A video from a 2006 reconstruction shows how the designs extended Gabo’s sculptural conceits; the transparent set is negotiated by multiple dancers, whose shiny costumes scatter light across the stage in tandem with George Balanchine’s rhythmical choreography. In contrast, the charming Constructivist Ballet (1940) is a rudimentary toy that Gabo made for his daughter Nina while living in St Ives. Taking simple materials from his studio – a plastic dome, some coloured scraps and bits of foil – he conceived a tabletop theatre animated by miniature performers who, powered by static electricity, leap and skip as a cloth is rubbed across the dome. 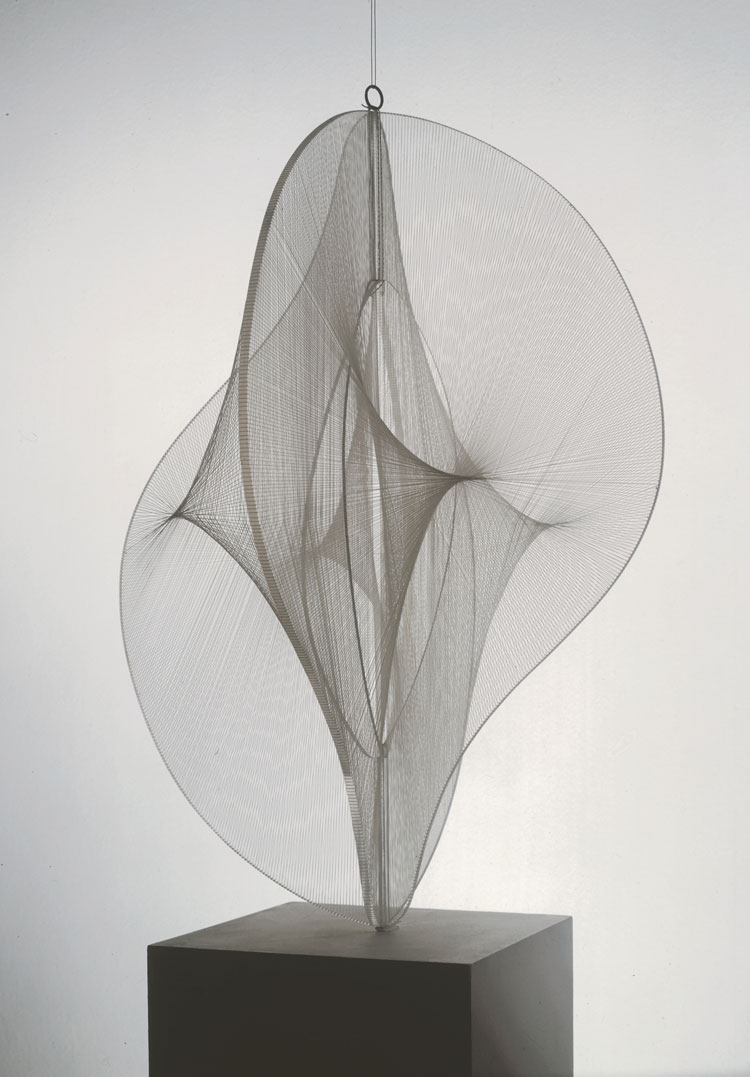 It was also in St Ives where Gabo developed his signature technique of winding fine nylon filament across Perspex supports. These ethereal works reach their zenith with Linear Construction in Space No 2 (c1949, remade 1971), a resplendent suspended construction whose curving contours seem to levitate above a plinth. In contrast, the nearby Kinetic Stone Carving (1936-44) is a surprising, though no less elegant, retreat to traditional sculptural techniques. Carved from Portland stone, this sensuous piece draws inspiration from the organic forms of nature, yet seems far removed from Gabo’s initial vision for an ultramodern, dematerialised art.

A burst of colour – originally repudiated in the Realistic Manifesto – closes the show with a series of wood engravings. Titled Opus (1950-73) and appearing like flattened versions of Gabo’s sculptural constructions, these simple, linear designs hover against mottled fields of red, blue, brown, purple and turquoise. The imagery is inspired by music, which Gabo described as “the highest and the most pure form of abstract art”. There is no doubt that the transient nature of musical structures and patterns chimed with his interest in rhythm, tempo and time, but these understated prints cannot compare with the sophistication, balance and poise of his three-dimensional works. Indeed, Gabo’s art is at its most potent when fully embracing all of the available dimensions, just as he originally argued for a century ago. 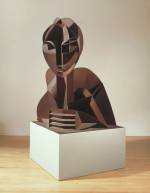 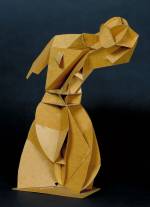 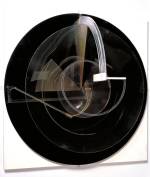 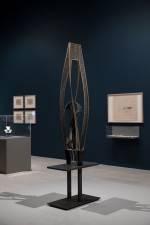 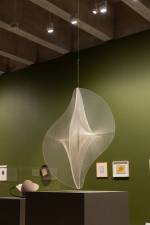