Connections both cosmic and corporeal are woven throughout Haegue Yang’s sculptures, collages and wallpaper in an immersive mixture that stimulates both eye and brain 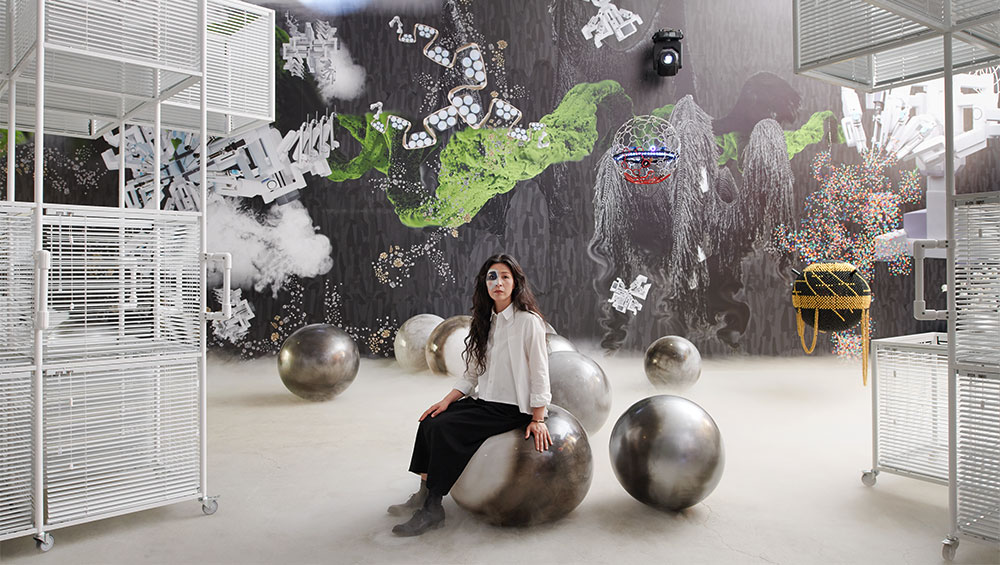 To enter the main gallery of Haegue Yang’s three-room exhibition at Tate St Ives is to encounter an alien landscape. Those unfamiliar with the Berlin-based, South Korean artist’s work might experience a moment of panic – a realisation that, whatever cultural encounter is being laid before your startled eyes, you don’t speak this language; followed by a frantic recalibration of visual and associative sensibilities. I have encountered the work of Yang (b1971) once before, at her South London Gallery show in 2019, but, still, the first impact is intense: my eyes - and mind - balk at the sight of a hundred bright, shiny door handles of polished chrome and brass fastened across two of the large, white gallery walls. Why are they there? Why so many of them? If they are meant to suggest doors, where are they and where might they lead? 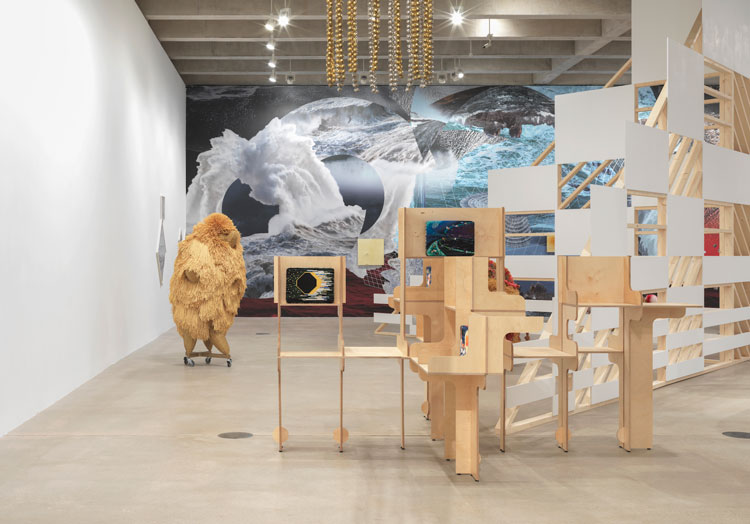 The instinctive response is to clutch at what seems immediately appealing, almost familiar: three figures Yang has created for the show to evoke the spirits of Barbara Hepworth, Naum Gabo and the lesser known, but contemporaneous Chinese artist Li Yuan-chia. Hepworth and Gabo have obvious links with St Ives – both adopted this part of Cornwall to carry out their bold, modernist experimentations; Hepworth’s garden studio is preserved in gently faded splendour a five-minute walk down the road. But it is Li, whose single work in the Tate St Ives collection Yang discovered while researching for this show in 2018, who apparently helped to consolidate the idea to incorporate biographical tributes to this important 20th-century trio in the show. The Chinese-born, Taiwan-raised artist, who studied in Italy and later adopted the UK as his home, was a contemporary, friend and fan of Hepworth and Gabo, and exhibited them at the Li Yuan-chia Museum and Art Gallery (1971-1982) he founded in Cumbria, where he spent the last 28 years of his life. But the real reason Li is here is because his participatory, multidisciplinary, playful and cosmologically oriented practice resonates strongly with Yang’s. 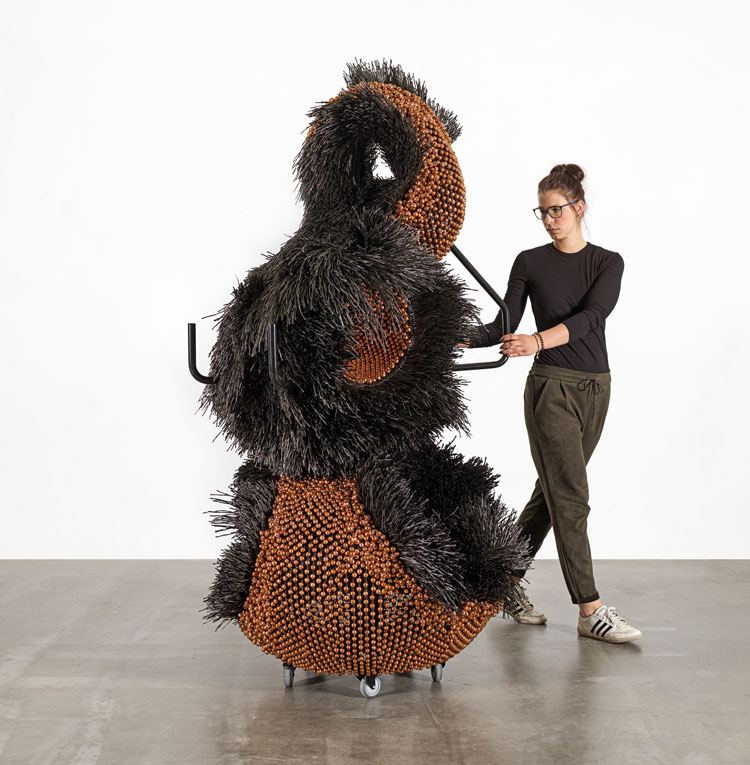 Yang’s sculptural tributes to these figures stand to attention either side of the entrance. They are the latest evolution of an earlier series, called the Intermediates, which comprises movable sculptures made of quasi-natural and hand-crafted elements; but these, thanks to the addition of bells – another favourite Yang component - are dubbed Sonic Intermediates. The one inspired by Hepworth (Parameters and Unknowns After Hepworth, 2020) is a three-part, voluptuous thing of pierced spheres formed by tiny, bronzed bells. Their hollow centres, a tribute to Hepworth’s sculptural signature, erupt with fluffy black synthetic straw, giving them a flamboyant, feminine flourish. There are handles for manoeuvring this flirty creature around the space, though sadly, at the preview, it wasn’t certain whether movement would be allowed thanks to coronavirus restrictions. 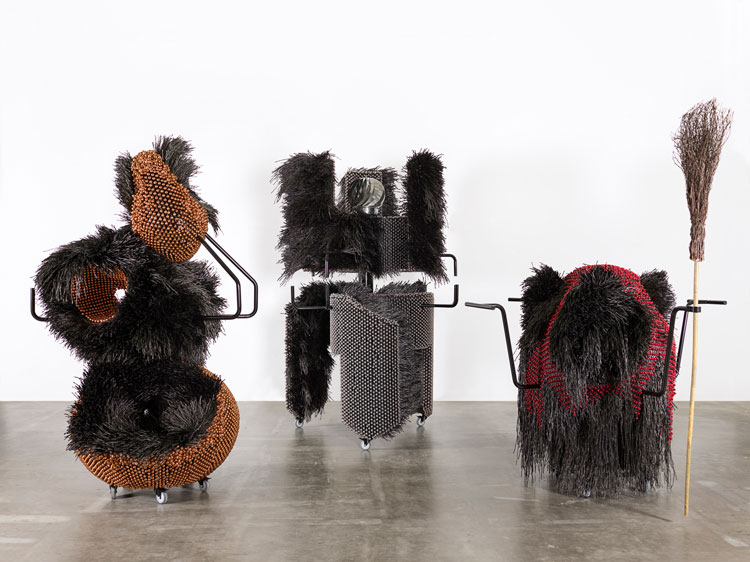 Gabo’s Sonic Intermediate alter ego is a more geometrically austere character, his “head” made of layers of shiny metal, after Gabo’s Constructed Head no 2 (1916), while Li’s strikes a shaman-style pose very similar to Li’s own photographic portrait in the adjacent gallery, standing in a hooded robe, with a broomstick in his hand. But Yang’s sculptural response to Li is a more cuddly, tufty-eared, furry-faced, squat figure, constructed of red bells and black synthetic straw; if anything, it reminds me of one of the Star Wars franchise’s most lovable creatures, the Ewok. 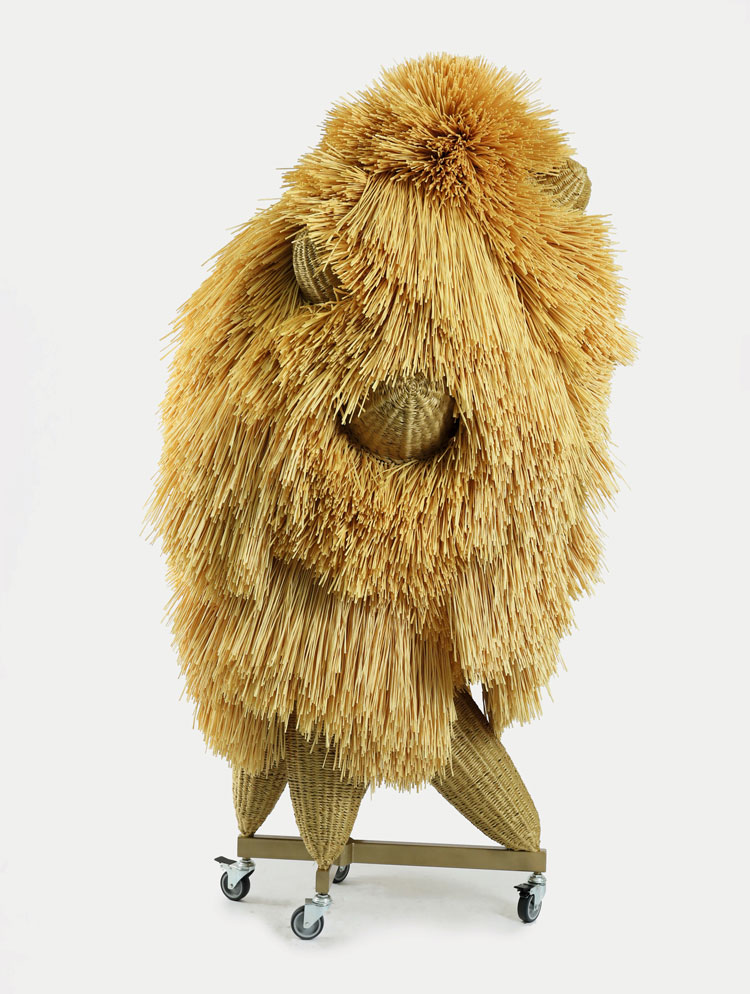 Humour is a major thread throughout Yang’s work. As is evident from the title of her Tilted Bush Lumpy Bumpy (2016) character, an earlier Intermediate, and one of three arranged deeper into the main gallery. This one reminds me of the cavemen – the wonderfully named Slag Brothers - whose whirling, spindly legs powered their basic, stone-age automobile in Hanna-Barbera’s iconic 1960s cartoon Wacky Races. Another strand to Yang’s work is her fascination with human responses to nature, from the primal via the surreal to the downright dysfunctional. It is surely no accident that these earlier Intermediates evoke the spirit costumes of eastern Europe and Africa - the masked Kukeri of Bulgaria, for example, or Benin Voodoo ritual dancers. But there is also something of corn dollies and that tradition of rural craftsmanship, now almost lost in western Europe. The intersection between art and craft is also a strong preoccupation, as Anne Barlow, the Tate St Ives director who put this show together with Yang, says: “She’s very interested in blurring the boundaries between fine art and craft.” 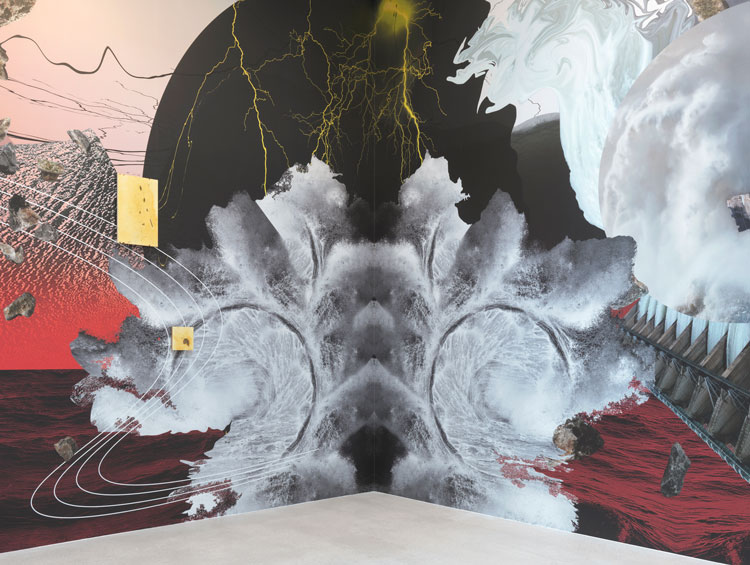 Most dominant of the many components choreographed around this room to Yang’s specification is the large back wall entirely covered in her own bespoke wallpaper, some of which bleeds around and along the adjacent right-hand wall: a random-seeming collage of stock imagery, most of which features turbulent fountains, clouds and waves of water. “Some people might think it’s a direct reference to Cornwall, but it isn’t,” says Barlow. “These are scenes that might conjure up the landscape around here, but they are also universal. Some may be more serene, but it’s mostly chaotic. There are references to humankind’s attempts to control water – images of dams, for example – but on the other hand, the suggestion is that it’s impossible to control nature. Ultimately nature has more control over humanity, as we’re seeing time and time again.”

This wallpaper holds the key to the show’s title, Strange Attractors, inspired by Edward Lorenz and Ellen Fetter’s research at the Massachusetts Institute of Technology, which showed that even the tiniest mathematical miscalculation in any predictive model of a physical system could lead to chaos. Lorenz devised a shape for this chaos theory, which resembles a butterfly; and a large mirrored sculpture represented within the wallpaper evokes that very butterfly, while, elsewhere, graph paper sections and curving sine waves presumably represent the art of plotting and mapping.

As a reminder of the unpredictability of life, Yang has stuck an assortment of square wooden boards on to this wallpaper, which she apparently prepares with a thin layer of varnish in her studio, and then leaves out to attract whatever dust, fragments or leaves might be swirling around. This, says Barlow, is typical of Barlow’s contradictory practice, with some elements fastidiously planned and pristine, and others left to chance.

There was nothing left to chance, however, about the layout of this room: every inch was fastidiously planned (albeit over Zoom, FaceTime or Skype from Yang’s studio in Berlin) for Barlow’s and the curatorial team’s execution. Barlow says: “She really thought of this space as an entire universe: it’s all been very tightly conceived as is Hague’s way. This gallery is very dense in terms of how she’s put it all together.” 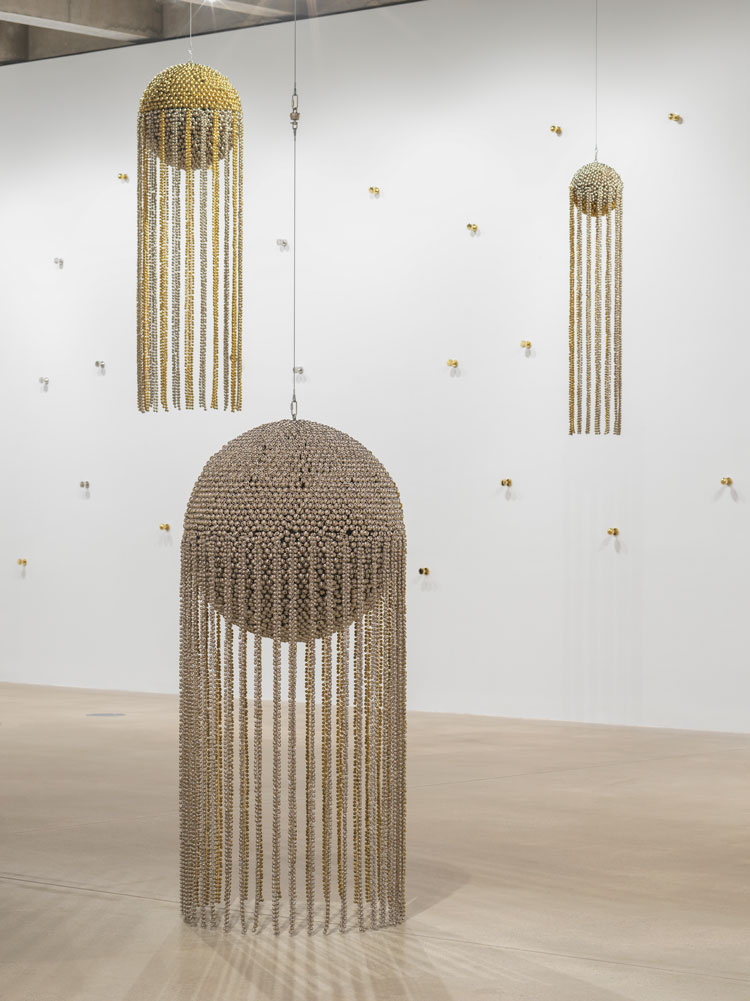 Two huge wooden frames - their slanting structural elements occasionally interrupted by oblong, horizontal boards - bisect the room, directing the visitor flow and creating curious sightlines between the objects. Six of Yang’s Sonic Half Moons (2014-15), complete with drooping, bell-strung tendrils, rise up to the ceiling between and around these frames, their physical placement and context giving them a half-celestial, half-aquatic, drifting quality (apparently the gallery assistants will give them a spin now and again, so their delightful tinkling skirts can be heard and seen, spinning around). To the left of them is another intriguing frame, its curved edges, blond wooden planes and modular construction resembling an arty Ikea bookshelf, albeit one supporting a series of what look like prayer cushions. It turns out they are prayer cushions, inspired by a visit to St Senara church in nearby Zennor. Handcrafted over the centuries by local needlewomen, the church’s kneeling cushions fascinated Yang, in particular one that depicted a solar eclipse. This one Yang has copied, and accompanied it with other similarly cosmic themed companions. The collection is named Mundus Cushion – Yielding X (2020), and they are intended to reflect our worries and wishes for the world around us. I can see they might also be wryly poking fun at our human tendency to pray for divine intervention as a means of clearing up our own messes or averting disaster, although Yang’s intentions here may have been more generous.

Barlow says: “In order to make them, she ordered a lot of traditional church kneelers, took them apart, and found out how they were fabricated. That kind of care and attention to fabrication and detail is key to everything that she does … They have these connections to space and cosmology – they carry the words orbit, tempest, twilight. The main thematics of meteorology come through the exhibition and this environment. She’s so interested in making connections across time, across space and across cultures; there was this magical connectivity for her.”

There are, indeed, resonances between all the works in this room – should you care to look for them – and also with those she has assembled in the adjacent, gallery 5, a much smaller room where a couple of Hepworth and Gabo pieces sit alongside many more of Li’s, including a large, beautifully made tapestry that Li and his collaborators at his museum created; one more serendipitous connection Yang discovered during her research was that this tapestry was worked on by Kate Nicholson, daughter of Hepworth’s husband, Ben Nicholson. 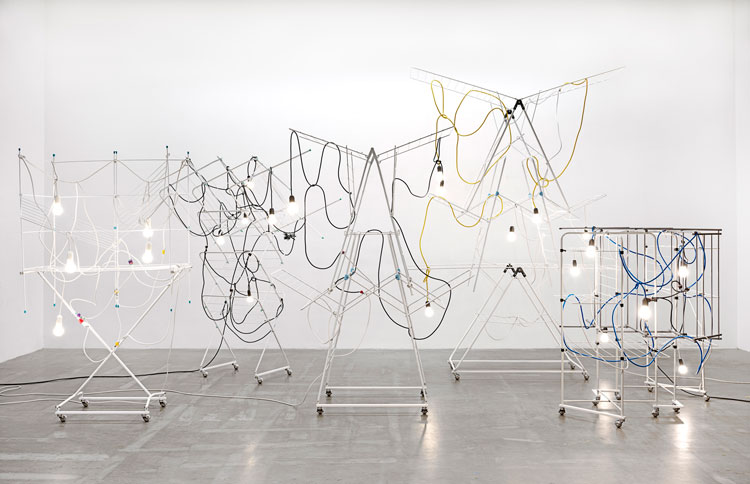 After all that intense visual, historical and mental stimulation, it is with some relief that we come to the lightness – some might say silliness – of the last room: the curving Gallery 8, which looks out on to the stunning Cornish coast. Here, Yang has assembled some of her characteristic domestic elements, the choreographies of which entail folding and unfolding – venetian blinds and laundry racks are a recurring motif. Here, she focuses on white plastic-coated laundry racks. At the press view, the laundry-ready racks were still being adorned with the specified, serpentine coils of thick, white lighting cables to which bulbs will be attached. Unlit, they looked sad, inanimate and somewhat puzzling. But a few hours later, with their bulbs in place and lit, they come strangely to life; lightbulbs representing energy and also, perhaps, enlightenment.

The idea is that they will disrupt and interact with the adjacent beachscape, with their jagged geometries and skeletal forms, artificial light interacting with bright coastal light, generating interesting optical patterns. But by now, my tired brain cannot decide if this installation is weird or wonderful. The generation of botherment and bewilderment in the viewer is part of Yang’s practice, too, says Barlow, and an aspect of which she approves: “I like the idea that you have to work to make those connections.” 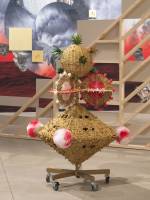 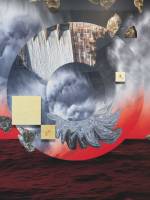 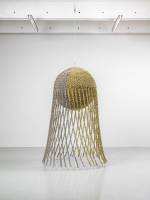 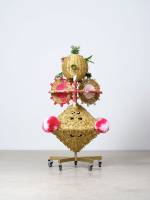