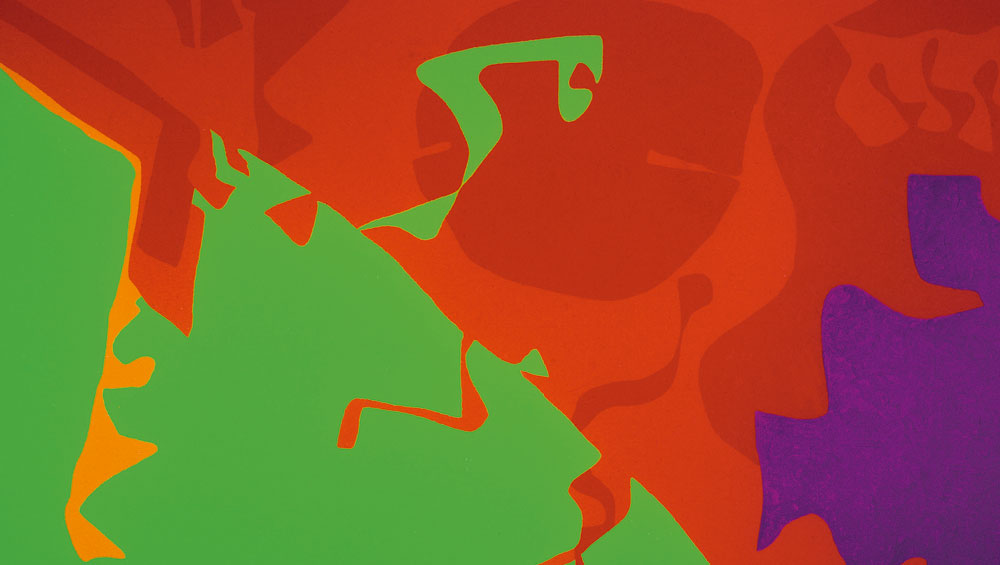 It has been a momentous 12 months for Tate St Ives – reopening in October 2017 following a four-year building project, led by Jamie Fobert Architects, to add nearly 600sq metres of gallery space, doubling the existing area – and, in recognition of this, achieving the accolade, worth £100,000, of Art Fund Museum of the Year 2018. The new four-storey extension, with its tall, sky-lit exhibition space, is currently host to the first major exhibition in two decades of works by the local – and hugely significant postwar British abstract artist – Patrick Heron (1920-99), who always wanted his paintings to be seen at different times of day, in different light, just as they can be here. 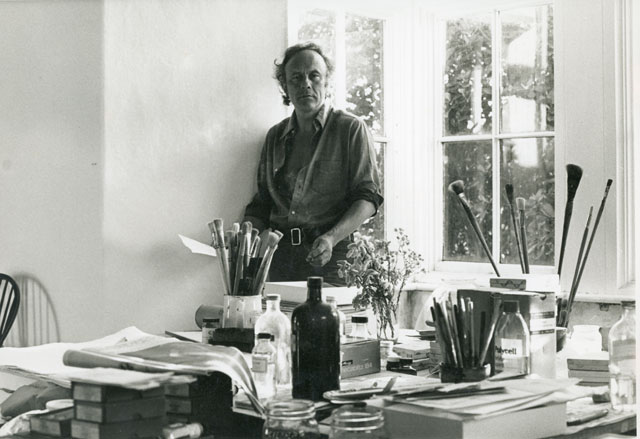 Heron’s works are primarily about two things: light and colour. A critic as well as an artist, he wrote prolifically on developments in art, both British and American, and on the place of colour, form and conception in a composition. For him, as he wrote in 1962, colour was “both the subject and the means; the form and the content; the image and the meaning, in my painting today”.1 Although his early works were fairly figurative, Heron moved away from this, “with a sense of freedom,”2 to huge canvases covered with violent explosions of fiery reds and enveloping cerulean blues, lush greens and tingling oranges. The exhibition is hung so that the more complex, figurative compositions are intermingled amid blocks of colour, stripes and entirely abstract wanderings of the brush. This curatorial decision has not been popular with all – with some staid critics objecting to the lack of chronology – but, for me, it works wonders, since repeated motifs from across the 50-plus years of his career represented here are pulled out and juxtaposed creating dialogues and pathways. For example, the yellow circle in Tall Purple: September 1962 seems to have bounced like a beach ball across the edge of the canvas, popping up again, slightly punctured, in Complex Greens, Reds and Orange: July 1976 – January 1977 to its left. Thanks to this hang, there are many routes one could take through the exhibition, returning and following a different thread each time – like re-encountering a symphony afresh by picking out a certain refrain. 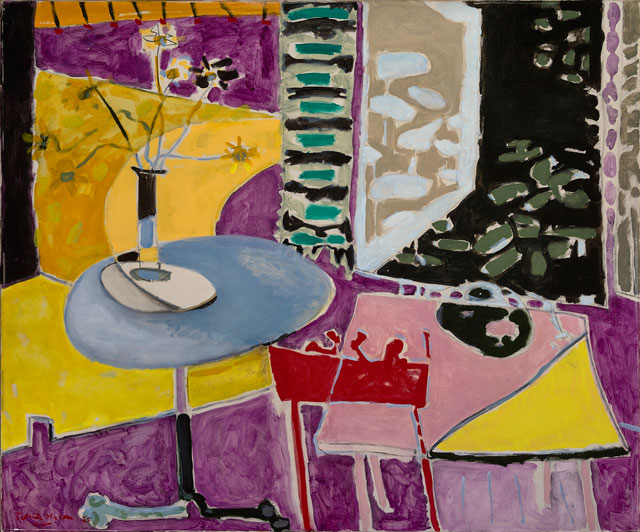 There is indeed a musical quality to Heron’s work, and he was always keen to assert that his colours and painterly inspirations were drawn from the French post-impressionist Pierre Bonnard (1867-1947), in whose work he discerned “the abstract music of interacting form-colour”.3 Like Bonnard’s, many of Heron’s canvases similarly conjure up visions of gardens and windows, saturated by light, with quick daubs and dabs, verging on pointillism, so that the colours interact and create illusions, like painterly pixels. 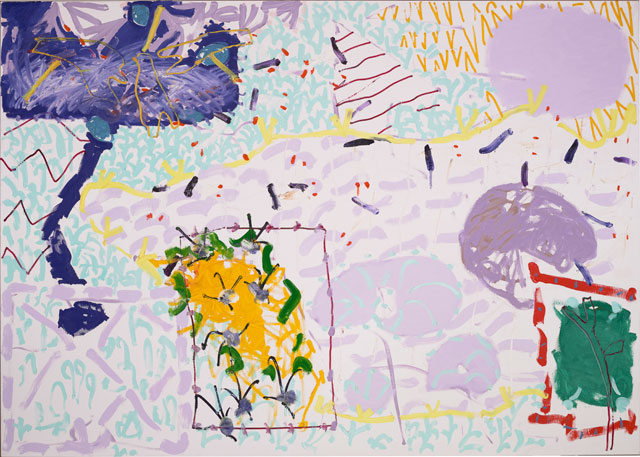 In his later series of Sydney Garden Paintings, Heron employs white paint to further exaggerate the sense of all-consuming light. White lines, which appear to be squeezed directly from the tube, streak across the canvas like the flickering shafts of sunlight you see when squinting at the brightness of reflected rays on the branches of leafy trees on a hot summer’s day. Leaf-like shapes and fronds, perhaps recognisable from the cut-out works of another influence, Henri Matisse (1869-1954), appear as well, and figures can equally be made out (as, for example, the green lady offering a bouquet of flowers in the bottom right-hand corner of Scribbled Violet Disc in Venetian with Reds and Emerald: September 1981) – but are these there by design, or purely figments of my imagination? “The meaning which a work of art has for society is not the same as the meaning that the artist was conscious of putting into it,” writes Heron in 1955. “This is because a work of art is not just a telephone exchange which facilitates straightforward communication. The work of art is in some profound sense an independent, live entity. It has its own life. It draws nourishment from its creator that he was totally unaware of having put into it: and it redistributes nourishment to the spectator.”4 Later, Heron admitted that, although he hadn’t consciously painted a representational landscape for years, he was sure that, living where he did, “a third of a mile and over 600 feet above one of the world’s most ferociously rocky coasts […] I don’t doubt for a moment that the enormously powerful rhythmic energies of the granite outcrops beneath my feet transmit certain rhythms straight up through the soles of my shoes every minute of the day.”5 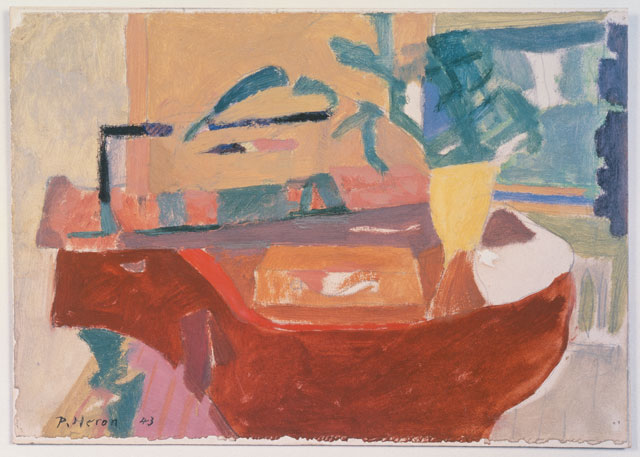 Born in Leeds, Heron spent his early childhood in Cornwall, returning regularly from the mid-40s, and moving permanently to Zennor, near St Ives, in 1956. He claimed to have decided to become an artist at the age of three, and certainly was designing silk scarves for his father’s company from the age of 14. The earliest work on show here, The Piano: 1943, lacks much of the vibrancy of his later paintings, but already he is – also, it might be noted, like Bonnard – transgressing the constraints of the compositional space, allowing the instrument to bump into and, in the viewer’s imagination, step over, the front (bottom) edge of the canvas. As his theories developed, so did what Heron termed his “edge consciousness”, whereby an edge, for him, became a springboard, or the liminal space in which the colour of one sector affected the colour of the next with maximum intensity. In order to achieve this intensity, he used small, soft watercolour brushes so that the edges of each coloured sector would touch exactly but not overlap. And because he wanted the same texture across the canvas, he had to fill in each field of colour in one go, using the tiny brushes for the whole painting.6 The resultant effect is that his large, splodgy works look almost like prints, so smooth are their edges – a complete contrast to those in which his brushstrokes are obvious and emphasised. Not just the edges between shapes, however, but the edges of the canvas itself became active stages, and Heron vehemently rejected the advice of the American art critic Clement Greenberg who, in a letter of 1958, suggested he keep his shapes more in the centre of the canvas, leaving space towards to edge. In Square Green with Orange, Violet and Lemon: 1969, for example, it is the centre of the canvas that remains empty, with the shapes clustering rebelliously in its corners. 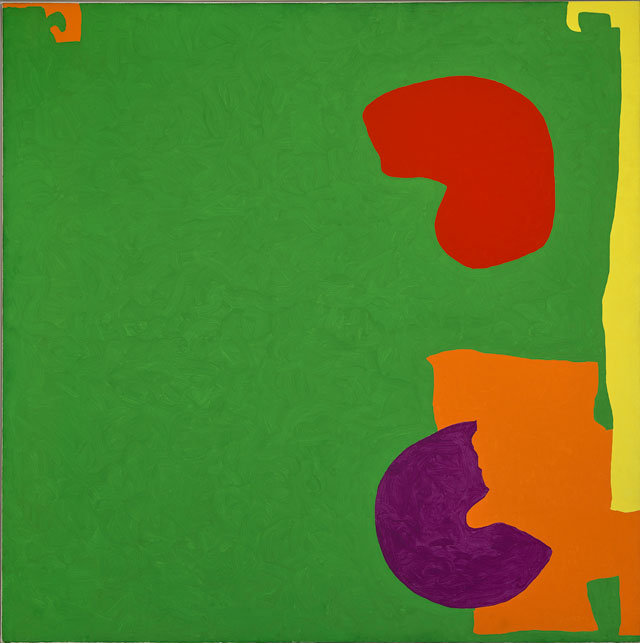 Whatever the quality of his mark-making, Heron sought to achieve an overall equilibrium in his compositions, primarily achieved through his denial of any hierarchical distinction between figure and ground. In Scarlet Verticals: March 1957, the red drips down the canvas in vicious stripes, while the crisscrossing gridlines behind create a sense of depth, so that, even though looking at flat shapes, there is a depth to the image, making it mesmerising, so that I feel as if I were somehow travelling through space. In Two Reds with Emerald Fragment: July – August 1977, his intimate knowledge of colour allows him to create shapes within shapes through subtle changes of shade. Heron, again, sums this up succinctly, writing in 1953: “In painting, space and form are not actual, as they are in sculpture, but illusory. Painting, indeed, is essentially an art of illusion; and ‘pictorial science’ is simply that accumulated knowledge which enables the painter to control this illusion, the illusion of forms in space. But the secret of good painting – of whatever age or school, I am tempted to say – lies in its adjustment of an inescapable dualism: on the one hand there is the illusion, indeed the sensation, of depth; and on the other there is the physical reality of the flat picture surface. Good painting creates an experience which contains both.”7 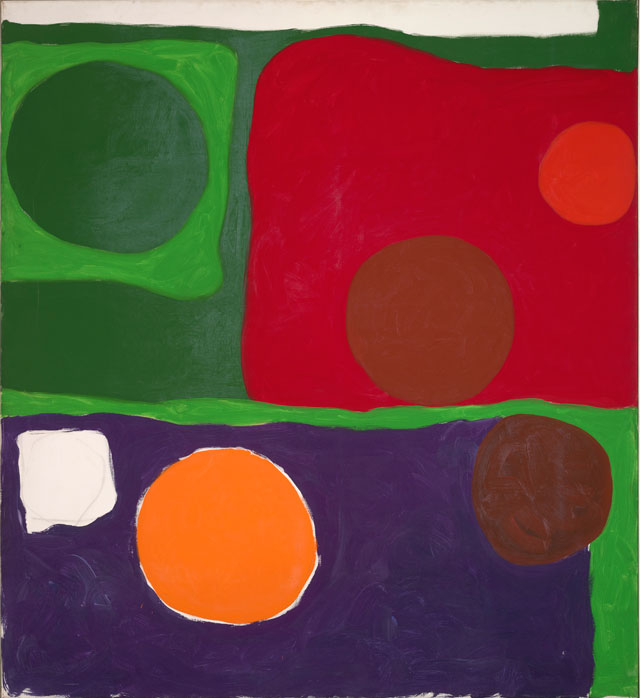 How does one write about an artist so eloquent and aware in his own right? While words can attempt to convey the joy of the colour and light in Heron’s work, it truly is the experience itself that ultimately “says” it all, and installed so close to his studio and home, lit, for the most part, by the sun itself, this is an opportunity to enjoy that experience which ought not to be ignored.