Helen Frankenthaler: Paper is Painting, at Bernard Jacobson Gallery, London is one of three exhibitions of the American abstract painter there, since 2000. Best known for her seminal role as a major influence on Colour Field painting, Frankenthaler’s immediately recognisable mature work has played a key role in the revised status and definition of drawing in recent years.

As early as the 1950s, combining the immediacy of the drawn line with pure gestural, abstract painting liberated her works on paper from small works, usually studies for larger works, to works in their own right. The present exhibition is a reminder of her pioneering contribution and the sheer beauty of her works that emanate light: “it is light that counts above everything. Not colored light, but color that gives off light – radiance.”1 Bernard Jacobson has provided the main opportunity for the British public to view the work of this key painter, although in 2003, the retrospective show, Helen Frankenthaler: Paintings on Paper (1949–2002) (from The Museum of Contemporary Art, North Miami) was shown in the Royal Scottish Academy, Edinburgh.2

The present London exhibition contains just 16 paintings on paper, from 1986 to 1997. Characterised by their exquisite pure hues, they range from pools of watercolour with few or no marks, created with great control and perfection, to experimental works that appear to have formed by complete chance on the surface – such is the apparent ease with which they inhabit the picture plane. Then her poetic, calligraphic works of poetry, which provide a mysterious and poignant parallel to life itself – the chance encounter, a momentary vision of nature, a joyous surprise. Accidental effects are embraced as part of the process: “I think accidents are lucky only if you know how to use them.” 3 The success of each work (for there is an absolute consistency in her oeuvre) comes from the intense involvement of the artist with every piece; process is tantamount to a journey of discovery. In interview with Tim Marlow in London, on the occasion of her exhibition at Bernard Jacobson in June 2000, Frankenthaler described the process: “It’s just for the time I am totally into creating a work. I am obsessed and the energy flows, the adrenalin flows, the ideas flow.”4

John Elderfield, a key critic and curator of drawing and all forms of works on paper from the 1960s, and chief curator of painting and sculpture at MoMA, New York, for over 30 years (1975–2008) has written extensively on Helen Frankenthaler. In The Modern Drawing – 100 Works on Paper from the Museum of Modern Art (1983) he firmly established her role as innovator, claiming that Great Meadows (1951), “prophetically rehearses what would become characteristic of Frankenthaler’s mature style: thin washes of color soaked into the very surface, thus literally identifying figure and ground and thereby allowing color to spread uninterruptedly across the surface as pure hue (even when shaded), unimpeded by the tactile associations that figure-ground divisions normally create”.5

Comparing her works to those artists who all influenced her – Wassily Kandinsky, Jackson Pollock, Willem de Kooning, Ashile Gorky, Elderfield points out that her pioneering work took place using paper, describing it precisely, “because the Frankenthaler [image] is damper in effect than anything these artists made (the sheet was wettened before working), its picture of the world seems disembodied, further removed from the tactile realities we know, and curiously still and suspended, for all the implied momentum provided by the cursive lines. Pollock’s allover style had bequeathed to Frankenthaler an art that transformed drawing into painting to transcend the traditional dualism between the linear and the painterly in being both at the same time. Frankenthaler’s art is the same. It dissolves the linear in an illusion of painterliness. But in addition to that, it transcends another traditional dualism: that between drawing and color. Color is drawn”.6

Her choice to work primarily, solely at times, with works on paper can be seen to belong in part to the revival and re-appraisal of drawing – and those previously considered “lesser” or subordinate works of art, watercolour, pastel, mixed media. Experimental methods and diaristic imagery were consequently given greater credence in the visual arts. The breaking down of hierarchies within the arts, which this implied, and which the rise of the importance of drawing in the 1970s also owes a great deal to the feminist movement. Frankenthaler’s position as role model and mentor for women artists has been profound, enabling important threads to be maintained, between modernism and conceptual and non-object, art practice.

Helen Frankenthaler has always worked with paper, as well as with canvas. Her love of paper began in childhood; for the period 1992 to 2002, she worked exclusively on paper. In the 1970s she commented, “Working on paper can even replace working on canvas for me, for periods of time … that was never true before, more and more, paper is painting”.7 The sizes of the works have not always belonged in a traditional context, indeed, she liberated her works on paper by amplifying the traditional scale; many are 6 x 7 feet. Work on paper has been vital for her while travelling and when no studio space was available. Possessing an immediacy – they fuse the personal shorthand of drawing and the optical resonance of pure hues, “to provide a simulacrum of open-air, illusionistic space, but one that belongs to the surface, into which these forms are puddle and stained”.8 In practical terms, smaller works on paper in recent years have enabled Frankenthaler to continue her art practice with great alacrity, in to old age.

Until the 1970s and 1980s, drawings (and indeed all works on paper) were considered to be of less importance than the larger works on canvas or board that evolved from them. Traditionally, works on paper were more personal and not intended to be exhibited, or they were studies for major works. The 1970s and 1980s saw a dramatic shift in the status of drawing, especially figurative drawing. Experimental works came to be considered as important, as valid works in their own right. It became possible to exhibit and sell such works, and for artists to devote their careers to media that had previously been considered ephemeral, fragile and difficult to exhibit. There was also a move towards large-scale works in materials that had previously been too difficult to curate, travel or store. Such changes owe a considerable debt to the career of Helen Frankenthaler, who curator Bonnie Clearwater describes as, “among the trailblazers of modern painting”.9 She combines a visual intelligence and knowledge of the history of art with experimentation, the ability to capture the moment. “One prepares, bringing all one’s weight and gracefulness and knowledge to bear: spiritually, emotionally, intellectually, physically. And often there is a moment when all frequencies are right and it hits.” 10

Born in 1928 in New York, Helen Frankenthaler achieved early recognition as an artist for her contribution to American abstract painting. She had her first retrospective at the Jewish Museum, New York in 1960. A seminal early work Mountains and Sea (1952), completed when she was only 23, was used as the basis of a major exhibition at the Solomon R. Guggenheim Museum, New York in 1998. After Mountains and Sea, 1956–1959, the major study of her work by John Elderfield (1989), rightly established her prominent position in the Abstract movement. Her close friendship with Clement Greenberg whom she met in 1950, introduced her to the Abstract Expressionist artists. She recalled: “Through Clem I met everybody, the whole cast. I was terrified … It was thrilling. He just opened it up to me. What he gave was the ability or the hope of feeling and experiencing painting. In this, he was a giant.”11

After encountering Jackson Pollock’s work, Lavender Mist: Number 1 (1950), she wrote: “It was as if I suddenly went to a foreign country but didn’t know the language, but had read enough and had a passionate interest, and was eager to live there. I wanted to live in this land. I had to live there, and master the language.”12  Robert S. Mattison in the catalogue for the current show observes, “While Pollock’s works depict nothing in the exterior world, they allude to the forces of nature, as do Frankenthaler’s paintings. Most importantly, Frankenthaler found in Pollock reinforcement for her own desire for total physical, spiritual, and intellectual engagement with the art work as it is being created”.13

Sixty years after her encounter with Pollock’s work, Helen Frankenthaler’s words echo in one’s mind as an encounter with her work is made; there is an air of familiarity but it is ambiguous, and mysterious. “Her works have the character of billowing, blossoming, growing, flowing, and flooding that suggest the forces of the natural world. Such allusions and transformations can be seen in Untitled (1994).”14

“I think I kept the same signature, and the same indescribable sensation in my painting that is not realistic per se but makes people associate and in some way, feel many things. The elements are never merely circles, squares and stripes”.15
Entering her world is a foreign place, only in so far as it can never be fully explained. As viewers we are given the great privilege of being accompanied on a personal journey, by a guide with consummate personal skill and a marvellous insight into the art of the past 60 years. 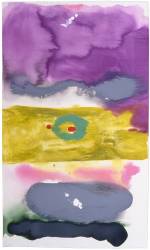