Long-known as ‘the only female at the birth of abstract expressionism’, Romanian-born Sterne always denied being an abstract painter, and this gem of an exhibition makes it clear why 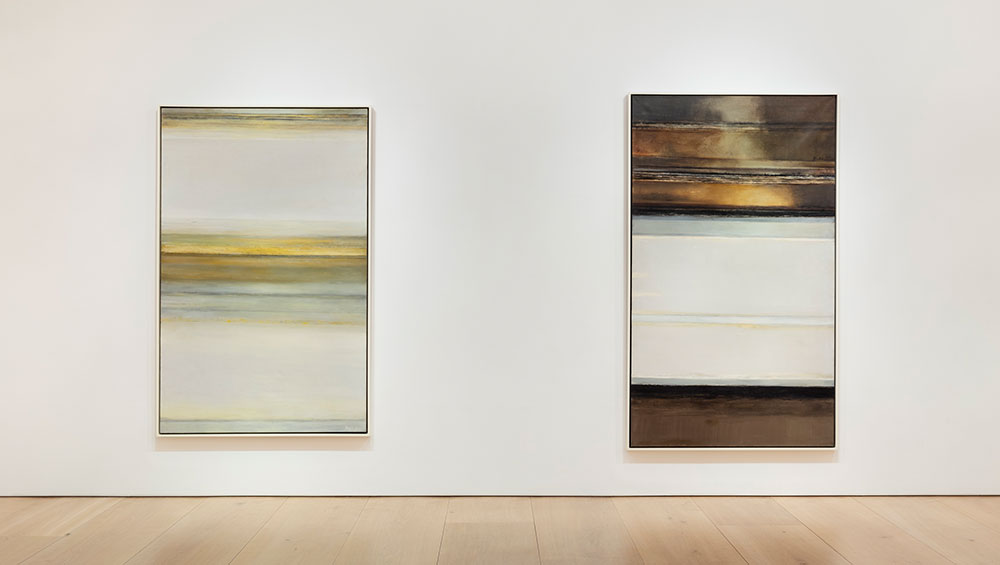 Hedda Sterne. “The only female at [the] birth of abstract expressionism.”1 Friends and neighbours with gallerist Peggy Guggenheim and in the stable of art dealer Betty Parsons. A “great-artist”.

Born Hedwig Lindenberg on 4 August 1910, in Bucharest, Romania, Sterne lived to the grand age of 100, dying in New York City in 2011. She knew she wanted to be an artist from the age of five or six. “I always loved Leonardo,” she told Sarah Boxer, for the New York Review of Books, shortly before she died.2 “Artists were always referred to as great artists. I thought that’s what the profession was. One word: great-artist. There wasn’t one moment in my life when I thought I wanted to be anything else.” And so that is what she became. She began to make a name for herself in Romania, but it was after arriving in New York in 1941, fleeing Nazi-occupied Bucharest, that things really began to happen. Having married and separated from a man named Fritz Stern, she adopted his surname, adding an “e”, maintaining this moniker, despite her marriage to fellow Romanian artist Saul Steinberg, three years later. 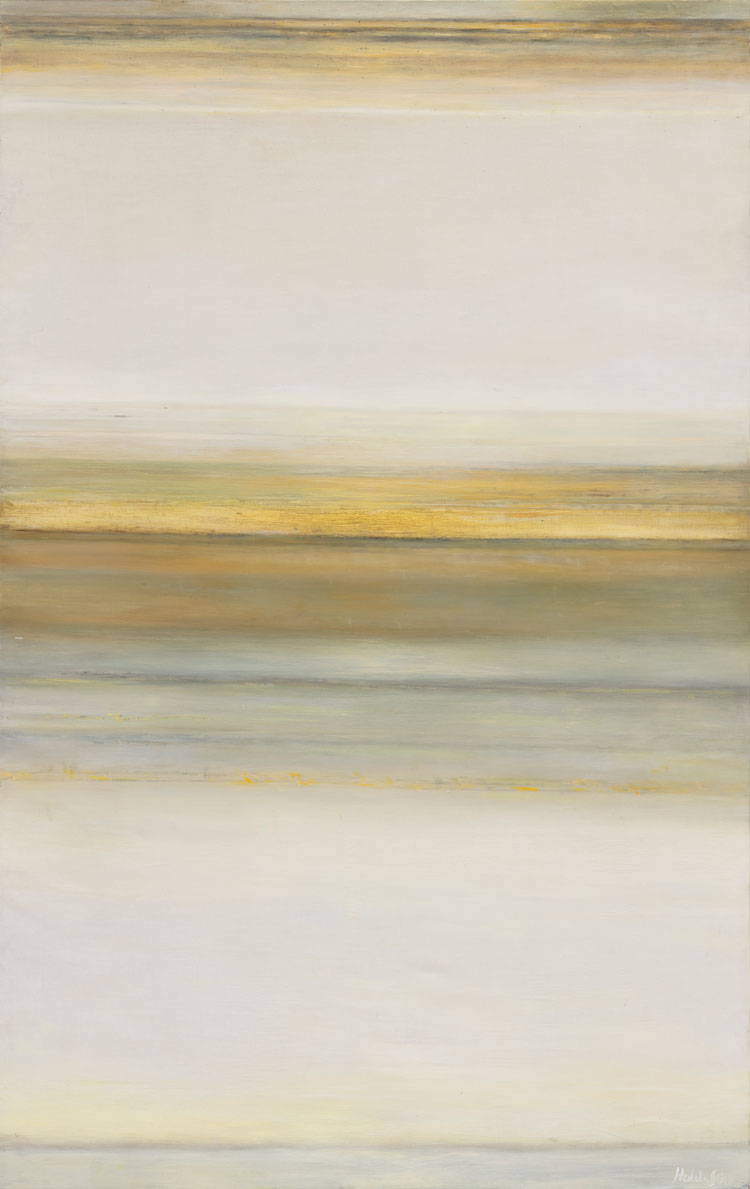 Sterne fell in love with America and painted its modernity from every angle: “The American kitchen, the American bathroom, the American street, you know, its horizontals and verticals, its points and lines. New York was a total delight, a paradise.”3 In 1950, she was photographed by Nina Leen, along with 14 other artist-signatories – including Willem De Kooning, Robert Motherwell, Barnett Newman, Jackson Pollock, Mark Rothko and Clyfford Still – of an open letter to the president of the Metropolitan Museum of Art, protesting against the museum’s aesthetically conservative group-exhibition juries. The photograph, of which Sterne later said, “I am known more for that darn photo than for 80 years of work,” describing herself as the “feather on top”, was subtitled “Irascible Group of Advanced Artists” and published on the cover of Time-Life magazine on 15 January 1951. Being the only female in the picture garnered Sterne much attention – positive and negative. Lumped together with the abstract expressionists, partly because of her gallerist and dealer, and largely because of this photograph, Sterne always maintained she was not one of the group. “I was not an abstract expressionist. Nor was I an Irascible,” she told Boxer,4 and, as critic Grace Glueck wrote in 2006: “She has maintained a stubborn independence from styles and trends, including surrealism and abstract expressionism … Although she never developed a signature style, Ms Sterne’s explorations have produced a small universe of evocative images.”5 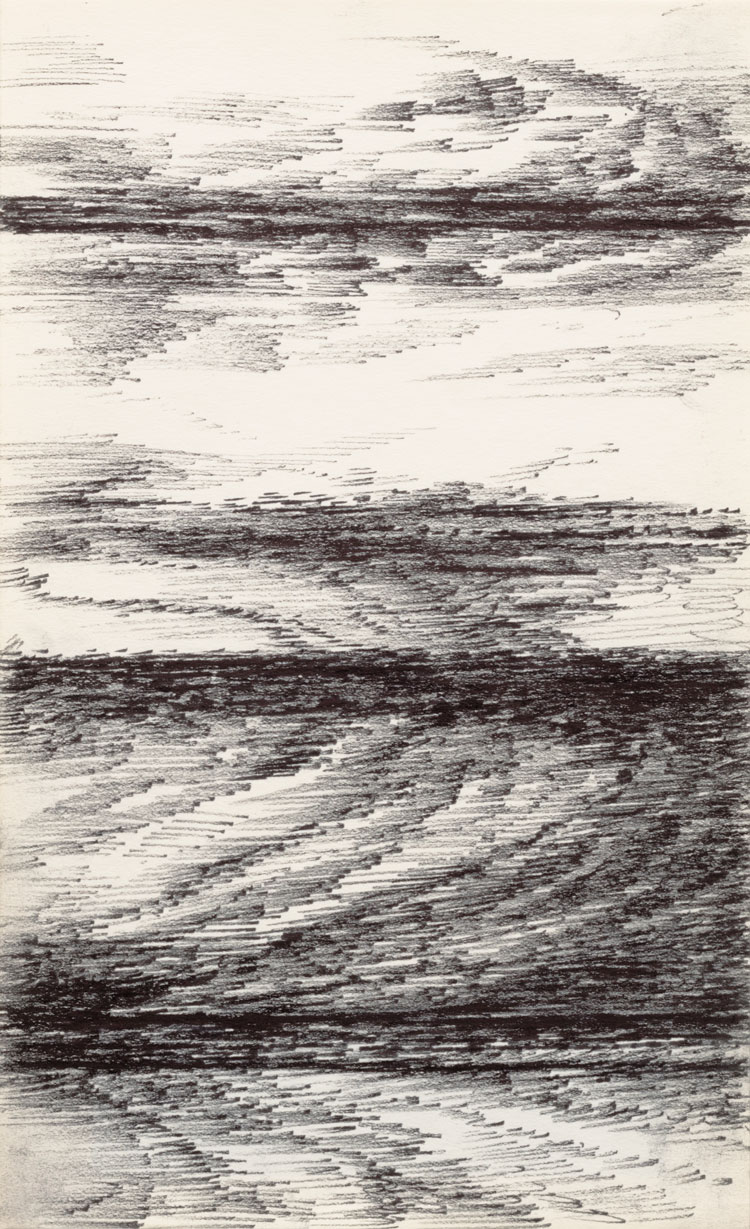 Evocative they most certainly are, as this small but beautiful insight offered by Victoria Miro Mayfair shows. Alongside a vitrine of archival photographs, newspaper cuttings and fascinating handwritten notes, there is a row of seven black-and-white drawings, and the main gallery comprising six paintings (with a further two facing outwards in the window). “My work is simply a diary – a record of my reactions to my life,” said Sterne,6 and her drawings, almost like etchings in their monochromicity, bear out this journalistic element. Are they skies? Horizons? Fields? Seas? Clouds? Or, equally, thoughts? Fogs – both meteorological and mental, dark and descending …? Untitled, it is left to the viewers and their imaginations to decide. 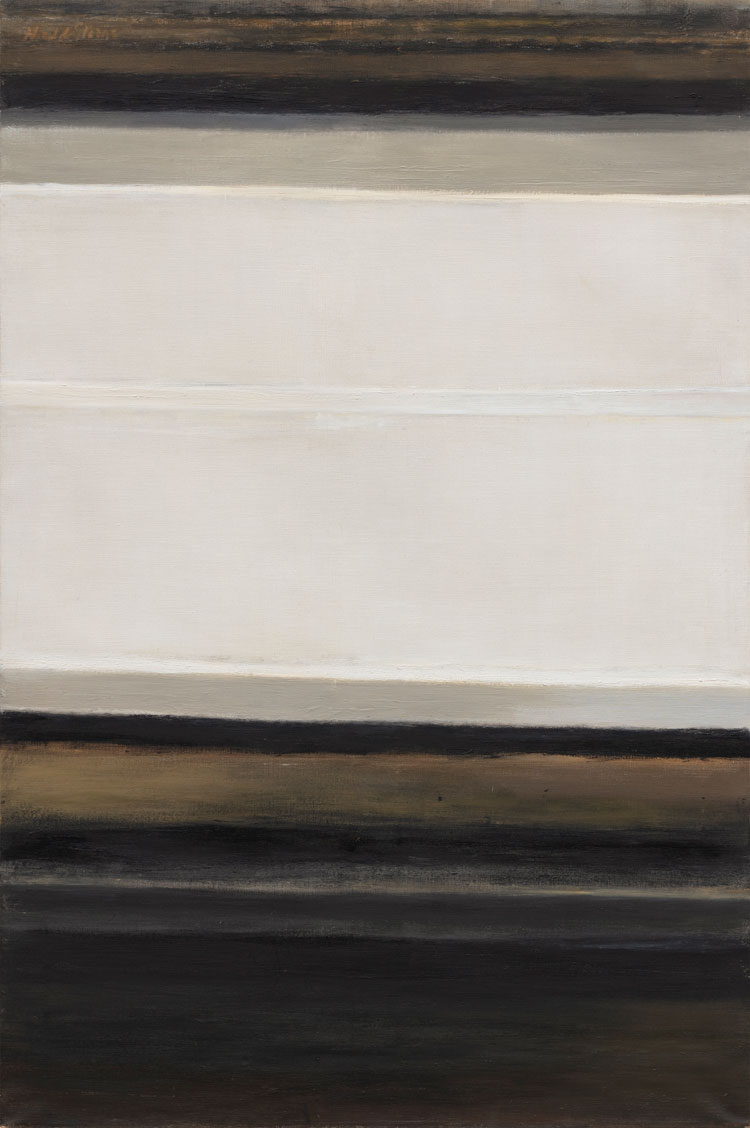 Ironically, in the early 60s, just as abstract painting was being replaced on its pedestal by pop art, Sterne’s work began to become more abstract. Perhaps it was her separation from Steinberg, and the onset of what she termed her “reclusive life”, but Sterne began experimenting with what she termed her Vertical Horizontals – which, colour palette aside, from a distance have a distinct resonance with Rothko’s colour field paintings. It is from this period that the eight works in the exhibition are taken. The six in the gallery hang facing one another, thereby – loathe as I am to make further reference to her friend and colleague, whose work she stated was nothing like her own – creating an ambience somewhat akin to the Rothko room at Tate Modern, albeit quite different in tone. For Sterne’s paintings are earthy in their palette: browns, stone and dove greys, blacks, creams, yellows, ochres and greens. While, at first glance, they appear to be entirely abstract bands of colour, beyond the superficial is where the similarity to Rothko’s colour fields ends. Here, there is something inescapably figurative, in that what grace the canvases are undeniably landscapes – in fact, while the earliest four (1962-63) are titled Vertical Horizontal (plus various combinations of hashtags and numerals), the latter four’s series title is Horizon (plus, again, various combinations of hashtags and numerals) (1963-65). 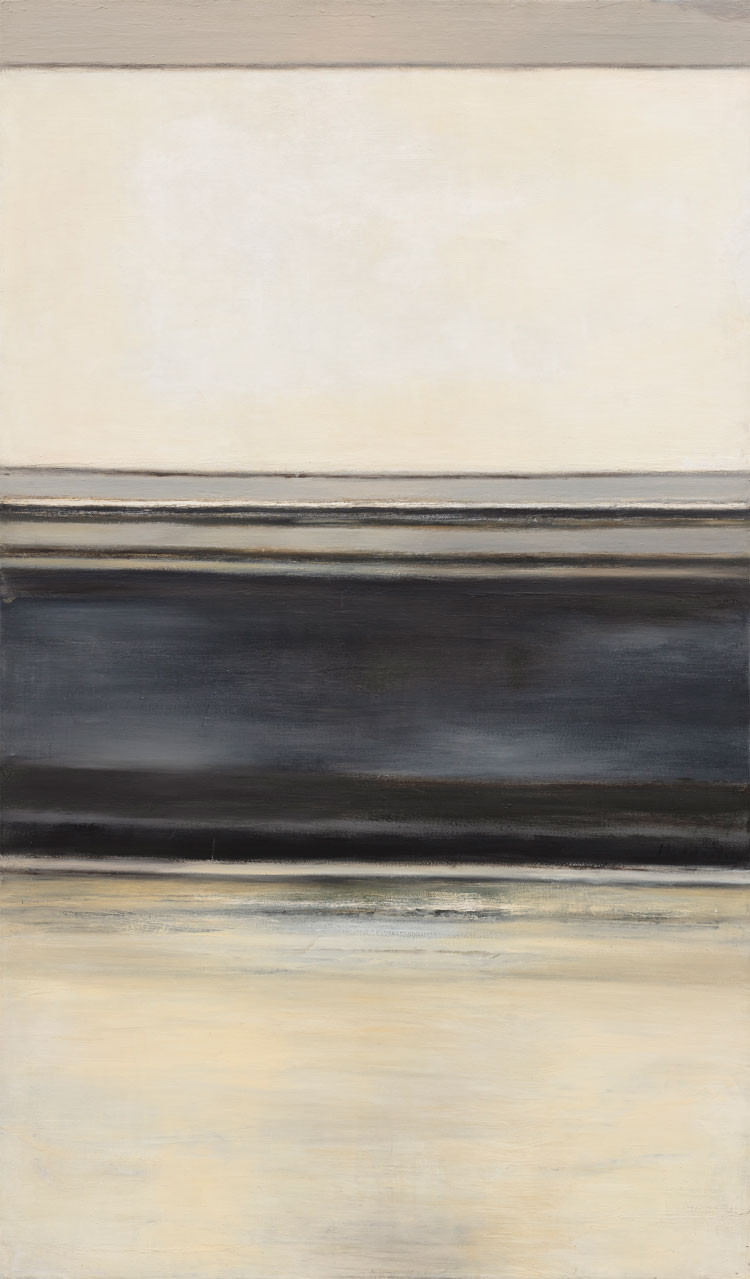 Take, for example, Horizon VI (1963). For me, this conjures up a white, sandy beach; dark and ominous sea; and sky, white from the sun – pictured either early morning or perhaps just past sunset. Given, however, that these works were inspired by a year and a half living in Venice as a Fulbright fellow, it is perhaps more likely that the dark water is that of a canal, and the white, the white stone of Venetian buildings and pavements, bouncing back that spectacular and unique light. While there, Sterne also studied glass and its effects on light in the Murano factory, pronouncing herself quite “obsessed”. 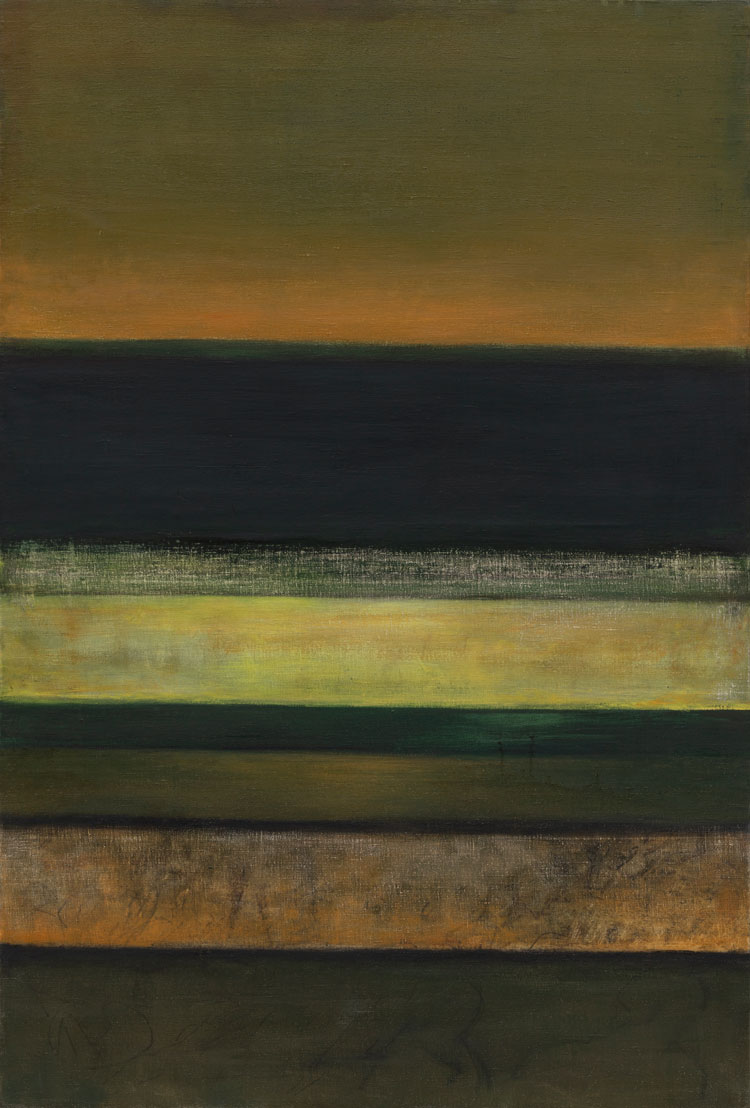 Horizon #3 (1963-65), on the other hand, could certainly represent the rolling fields where I live in Hertfordshire, where the horizon line melts between the infinity of the land, stretching out seemingly for ever, and the heavenly infinity of the sky. The tones of the latter reflect those of the earth, portraying all of creation as one. Wiggly drawn lines in the lower horizontal bands add to the impression of churned-up, freshly ploughed soil. Sterne travelled a lot in the US before her time in Venice – across the wide-open landscapes there. Her paintings are not a representation of any one given horizon, but an amalgam of all those she has seen and experienced. In fact, she even suggested that these works might be read as “landscape portraits” – that is, embodying the idea that a person might be made up of all the glinting horizons they have seen.7 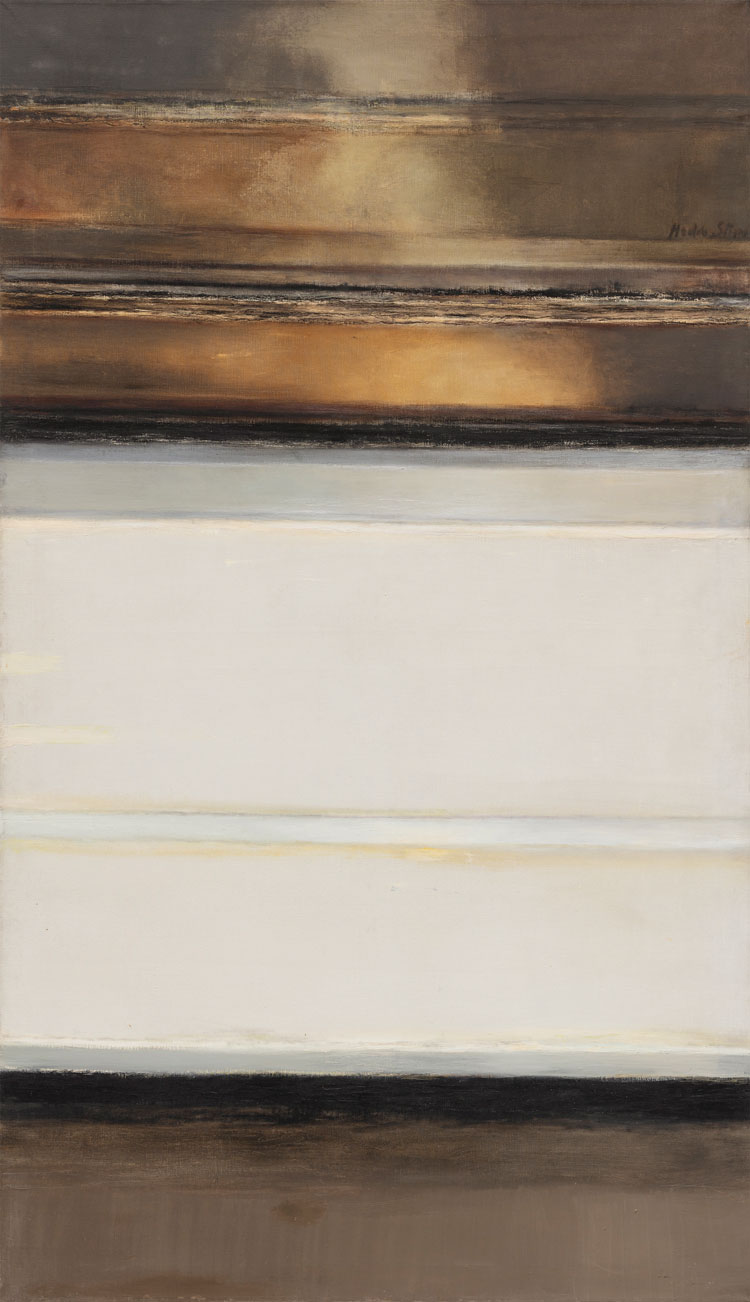 Vertical Horizontal XVII (1963), despite its title, is just as much a landscape as those just discussed, with an achingly beautiful seeping sun sending its pale rays out from above the horizon line in the top third of the composition. Both this painting and Horizon VII (1963) share a deliciously rich texture, close up, where the horizontal lines have been built up and scratched into, creating something physical, visceral, and earthly – not at all something existing in the abstract, conceptual sphere. Sterne has also signed Vertical Horizontal XVII (1963) quite obviously in the top right-hand quarter. Her name appears in different positions on each canvas: on some, far less, if at all, discernible than on others. This element of human graffiti is as if the artist were marking her human presence on the land.

I am a huge fan of Rothko (apologies for turning my attention to him yet again – but, my Honour, this is a valid train of thought!) and remember encountering a great many of his works in MoMA, New York, the first time I visited, before I was even part of the “art world” in terms of my career. I was both overwhelmed and overjoyed as I stood being fully absorbed into his fields of colour, taking on their various moods. I had never before seen his dark black and grey works and adored them almost more than the sunny, seemingly cheerful oranges, yellows and reds, or the meditative blues and greens. These works by Sterne, however, are even more of a pleasure to behold – not overwhelming, nor overjoying, but simply grounding. They make me feel my feet on the gallery floor, hear the sound of the pounding ocean and whistling wind, smell the wet soil from the freshly ploughed fields, taste the salty waves on my lips, and see infinity – but an infinity that exists, that is part of nature around us, rather than infinity as a purely theoretical concept. In Sterne’s works, the abstract is rendered figurative; the spiritual is made earthly. As she says: they are a record of her reactions to life; pure phenomenology. 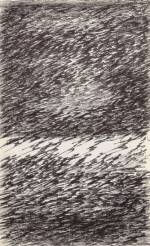 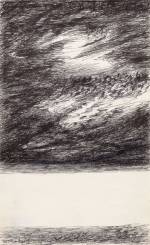 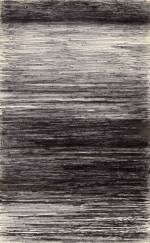 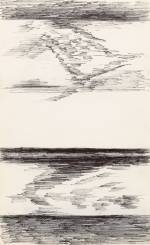