Nathalie Djurberg & Hans Berg: Who am I to Judge, or, It Must be Something Delicious

Nathalie Djurberg & Hans Berg: Who am I to Judge, or, It Must be Something Delicious

Lust, sexual desire, sin and guilt are explored in a series of short claymation films supported by a new sculptural installation from the Swedish artist duo Nathalie Djurberg & Hans Berg 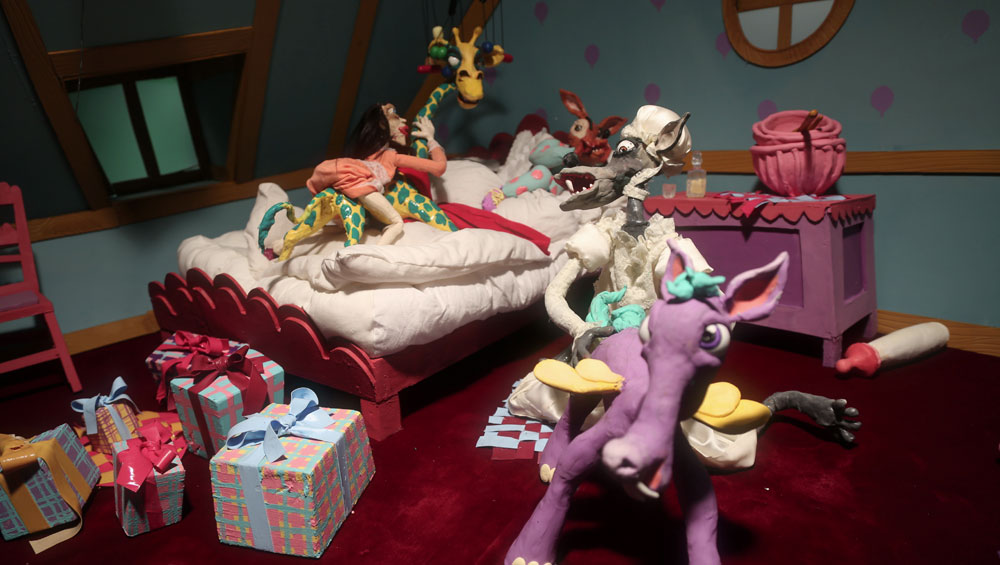 In his landmark book The Interpretation of Dreams, Sigmund Freud noted: “The virtuous man contents himself with dreaming that which the wicked man does in actual life.” If you wanted to find a visual representation of this statement, you could certainly begin with this new exhibition by Swedish duo Nathalie Djurberg (b1978) and Hans Berg (b1978). The only misleading aspect of this is that the work is not just a dream, but also a nightmare. If you were born in a Catholic household, as I was, feelings of guilt and shame towards indulging your innermost desires are familiar friends. But there is nothing quite like the discomfort felt by witnessing an animated lust-ridden wolf fellate the udder of a cow, on all fours (obviously), to the sound of a dark and pulsating techno beat in their short film Delights of an Undirected Mind (2016). This is the wonderfully warped world of Djurberg and Berg.

The first work on show, Who am I to Judge, or, It Must be Something Delicious (2017), is a sculptural installation made specifically to go alongside three short claymation films. At first glance, you could be forgiven for thinking that the installation is a children’s playpen filled with toys. But as you get closer, and with Berg’s haunting sonic accompaniment creeping through the room, you begin to understand that the scene is, in fact, quite sinister. A large white platform or plinth supports an army of Djurberg’s mischievous anthropomorphised Plasticine creations, the sight of which is reminiscent of the satirical novel Gulliver’s Travels when the tiny Lilliputians capture and tie down the comparatively large Lemuel Gulliver. Except, here, there are several of these situations going on at the same time. Various minute figures, including acorns with arms and legs, assault and ravage, en masse, innocent-looking suited elephants and pink ponies. A banana has its skin slowly peeled off while, elsewhere, many of the sordid perpetrators smoke cigarettes. Cut-out speech bubbles litter the platform, spelling out such utterings as, “Was it remarkable?”, “I did nothing to help my brother”, “What crap is buried here”, and the most ominous one simply saying, “no VIP”.

The installation has echoes of Jake and Dinos Chapman’s The Sum of All Evil (2013), where a mass of crucifixes bearing hundreds of Ronald McDonalds are spread across a Holocaust-inspired setting. But where the Chapman brothers attack key figures linked to capitalism, Djurberg and Berg make no such attack. There is no specific blame necessarily being thrown out in Who am I to Judge, or, It Must be Something Delicious. The “bad” characters are interchangeable with others that are being assaulted. Instead, this piece, like a lot of Djurberg and Berg’s work, is simply an examination of the kinds of thoughts and actions humans indulge in at their most perverse. The soundtrack to this perversion, played on three record players with one vinyl label stating, “There is nobody home here” makes you feel as if you are in the depths of a dark and treacherous jungle, moved along by the humming vibrations of what cannot be seen. But if you continue into the custom-built viewing room in the backspace of the gallery, you will find yourself in a whole different jungle of darkness.

Here, a trilogy of short claymation films play on a continuous loop, tied together through their exploration of themes of innocence, depravity and sexuality-related shame. In Delights of an Undirected Mind, the viewer is drawn into a stream of consciousness dream that is pedalled along by familiar characters derived from Little Red Riding Hood and My Little Pony, but in very unfamiliar territory. The dream is that of a young teenage girl, exploring sexual fantasy, ranging from the seemingly innocent to the deviant. The sexual allure of certain foods features, with two cucumbers spooning each other in bed, while a mouse clambers on a slice of cheese, slowly massaging it until aroused. Interspersed throughout this dream sequence is a matador, slowly caressing his own body, taking swipes at a cake with a long sabre. These sinful desires then reach a climax with the young girl defecating on her own bed, only to sweep her shame away under the pillow.

Sexual desire is explored further in Worship (2016), where the various tropes and stereotypes of pornography are assessed. Backed by Berg’s pounding electro-pop score, various characters switch between victim and perpetrator among a sea of latex, whips and phallic objects. In an interview at Kunstraum Dornbirn in Austria in 2016, in which the two artists discussed the presentation of Worship, Djurberg recalls how, during the making of Worship, she began to realise that her view of her own sexuality was shifting. Djurberg suggests that she felt as though she was “not just a victim, but also the perpetrator and it can be in very subtle forms”.

Dark Side of the Moon (2017), the most recent claymation short by Djurberg and Berg, relates to hidden trauma and finding the strength to deal with it. A girl wanders through the forest with a nervous pig, arriving at a locked cottage with a mooning moon and a smoking wolf parading around it. When the girl unsuccessfully attempts to open the cottage door, the moon hints to the girl that eating sweets will provide comfort and fulfilment. The source of the trauma in Dark Side of the Moon is not totally apparent, but if Delights of an Undirected Mind was the dream, Dark Side of the Moon is the nightmare. Through these videos collectively, are Djurberg and Berg simply “dreaming that which the wicked man does in actual life”? We can only dream.