Mondrian and his Studios

Mondrian and his Studios

As observers, we might be tempted to approach the work of Piet Mondrian as we would the scene of a crime; searching for clues as to whether the paintings are pure design, metaphysical masterpieces or pseudo-conceptual hogwash. Tate Liverpool’s retrospective, the largest collection of his work ever assembled in the UK, deftly exposes the limits of such viewpoints, even if the artist’s paintings remain somehow in the centre of that triangle.

For an artist as concerned with the surface as Mondrian, it is fitting that there is much more going on beneath it, as the artist was keen to point out in his writing. It would be easy to assume we know his work well and instinctively. Paradoxically, the success of Mondrian’s legacy has been to the detriment of the original paintings. There are only so many times his designs can be replicated on the tiles of 1970s municipal swimming pools, Yves Saint Laurent dresses and hairspray canisters before they lose their lustre. Arguably, he brought this on himself with his professed aim of dissolving art into the environment and the artist into the community. Be careful what you wish for.

When we return to the source, however, we find the actual paintings, while the same from afar, are curiously unfamiliar in close proximity; we never quite knew them as we thought we had. This has a great deal to do with their replication in prints, plates and assorted ephemera. The lines we took to be mechanically produced are subtly imperfect. The geometry we took to be dictatorially or robotically accurate is imprecise and personal. His famous “grid paintings” reveal distinct personalities from the striking, sparse yet considered imbalance of Composition With Red, Yellow and Blue (1927) to the brash almost overbearing Composition With Large Red Plane, Yellow, Black, Grey and Blue (1921). Despite this, there is little to dispute the often-repeated analogy that distinguished great artists from great (singular) works of art: the fox knows many things, the hedgehog one big thing. It is not an extraordinary revelation to note that Mondrian was the latter. These iconic works (“iconic of what?” might be asked) have remained fixed points in the artistic firmament, by which we navigate, even if only in avoidance.

Mondrian seems to have predicted and sought to assuage accusations of one-dimensionality in his notes. In 1910, he jotted in his sketchpad: “Masculine and feminine, vertical and horizontal.” At other times, he claimed to be trying to encapsulate the expansive Newtonian unity of the cosmos. Certainly there was substance to the style, even if his theosophist claims seem insubstantial in comparison to, for example, Kazimir Malevich’s early Soviet mysticism. Mondrian’s outlook was profoundly shaped by his readings of the philosopher Hegel and his binary oppositions emerged from Hegelian dialectics. Mondrian accepted that his “neo-plastic”’ works were increasingly abstract, but so too then was life, in his opinion. They appear as abstract as can be and therein lies the key. “The surface of things gives enjoyment,” he wrote in his sketchbook in 1911. “Their interiority gives life.” It was a tacit, perhaps slightly unwilling, admission that there is, and can be, no pure abstraction because we are associative creatures, both painter and viewer. Mondrian’s paintings may not seek to avoid being representative, but they cannot evade meaning, any more than we can evade memory. It is the saving grace of art for art’s sake, caught in a state of being deep and meaningless, that it is an impossibility. Mondrian, for one, is “saved” from being an accomplished decorator by associations; his and ours.

In a 1915 letter to fellow De Stijl leading light Theo van Doesburg, Mondrian explained: “This is a composition of vertical and horizontal lines which will … express the idea of rising upwards, of magnitude. This is the same idea which used, for example, to be the guiding principle in the construction of cathedrals.” It would be tempting to think Mondrian was beginning to build those unconventional cathedrals. Accompanying photos of his studios (Amsterdam, Paris, London, New York) encourage this view, with paintings elevated high on walls; icons of a modern geometric version of the sublime. It is apt, then, that there is a shrine here – albeit an open, inclusive one – in the reconstruction of his Rue du Départ studio. Re-enactments and even actual places of pilgrimage often have a dislocating doppelganger feel, but this is vibrant, fun and immersive. It is inauthentic, of course, but it fits, especially given Mondrian’s blurring of where art ends and the surrounding world begins. This blurring is continued with the inspired pairing of his Pier and Ocean series with a fine view of the docks and the Mersey beyond.

At its best, Mondrian’s work acts as celestial order to counter Mark Rothko’s void. It ranges from the atomically small processes suggested in Composition in Colour B (1917) to the vast but similarly binary interactions of ocean and sky. It is all very Zen; calming more than revelatory. To his claims of utopianism, it is hard not to feel Mondrian the self-professed anarchist boxed himself in with Hegel the logician. Having stripped art to its building blocks, where could the artist go next? The elemental code that Mondrian painted in, and regarded as the beginning of art, was just as much the end.

In contrast to his modernist monk-status, as critics often claim, Mondrian’s less well-known works prove there was an embracing radicalism and joie de vivre beneath the frigidity. His love of ragtime combined with his love of the New York streets (his wartime exile) to give his work, at times, a dynamism to match the omnipresent rhythm. This is best viewed in his genuinely thrilling but sadly absent Victory Boogie-Woogie (1944), but it is present also in his “lozangique” paintings, where the order is refreshingly tilted. All through his abstract work, there is a welcome distortion of symmetry and a vibrancy that you long to break out even further, as suggested by the Cubist-influenced Composition in Oval With Colour Planes 2 (1914). There is evidence, too, in the dissonance of Composition With Grid 8: Checkerboard Composition With Dark Colours (1919) and the harsh No VI/Composition No II (1920) of his claim that his neo-plastic method was “as destructive as it is constructive.” There is a very definite path, however, right through his work from his early Cezanne-tinged, occasionally wonderful naturalistic paintings to his later restricted abstractions, which seems logical at the expense of surprise and diversion. Whether it was an ascent is questionable.

Ultimately, Mondrian stayed true to his vision of affirming reality in painting rather than escaping or strictly representing it. If reality is a series of narratives we tell ourselves to connect points in, and bring order to, the chaos, Mondrian did so in right angles. It is perhaps superfluous to wish he had broken free of the tyranny of the straight line more often, and it is certainly no fault of a splendid, thoughtful exhibition. For an artist who obliterated the distinction of colour and line, and changed the meaning of framing, it is worth noting how space, a subject Mondrian obsessed over, can restrict as much as it can enlarge. 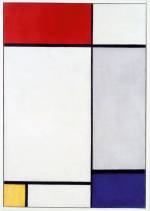 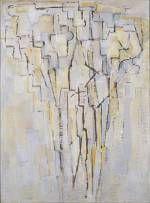 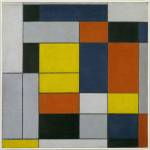