To most people who live in London, the name Camden Town means a busy interchange on the Northern Line of the Underground where trains often shudder to a halt in the tunnel for a red light. Passengers sit in claustrophobic silence until the lights change and they can continue their journey.

This could be a metaphor for the Camden Town Group, which enjoyed a short, but active, life in the years 1911 and 1912, staging only three exhibitions. The group itself consisted of sixteen members - all men - who were on a kind of journey. They had resolutely left the stuffy conventions of Victorian painting with its moralising and pedantic naturalism behind them and had witnessed an acceptable form of Modernism in the form of post-Impressionism, but as they peered over the abyss of radical Modernism, many did not like what they saw. On this journey from Impressionism to Modernism, they came to a clunking halt to take stock and make the best of what was available.

The group's key members included Walter Sickert - who may be acknowledged as its moving spirit - Harold Gilman, Spencer Gore and Charles Ginner. It attracted some fellow travellers such as Augustus John, who had little to do with its core values and practices, which were an emphasis on ordinary, urban subjects, rendered in an unproblematic, figurative style, but with a degree of stylisation of form and intensified colour values.

Despite the brevity of its life, Camden Town painting had an enormous influence on British painting during the following half-century, and cast a long shadow forwards into the painting studios of most British art schools. Apart from the intrinsic historical value of this excellent exhibition, I would recommend that anyone who studied art at a British art school before the 1960s should visit; the experience will explain many things which hitherto may have proved obscure or puzzling.

The Camden Town painters took as their subjects the urban and the ordinary. There was a determined avoidance of many of the values which had dominated Victorian painting and still had a powerful influence on art practice and art criticism in the Edwardian age. These included the notion that painting should have a moral purpose, offering the spectator uplifting messages of a spiritual, moral or social nature. The artists of the group preferred the kitchen to the salon, the music hall to the opera house, and the charlady to the social celebrity. This celebration of the ordinary, however, went even further, especially in the work of Sickert, many of whose subjects deliberately suggest associations with illicit sex, crime and prostitution.

Stylistically, they all rejected the idea of a culture of representation based upon the pedantic recording of details. There were, however, big variations in how this was realised in practice. For several of the group, it meant an increasing simplification of forms and the use of a mosaic of intensified colours. Harold Gilman's well-known 'Mrs Mounter at the Breakfast Table' has become an icon of this type of painting, and represents some of the ideals of Camden Town painting at its very best. In the hands of less talented members it degenerated into a kind of plodding map-making. Some of the work in the exhibition looks as if all the air has been sucked out of the scene, depriving it of all atmosphere, life and interest. Another stylistic feature which became very important to many of its members was the prominent use of impasto, often over the whole surface of the painting.

Perhaps the relatively short life of the group as a formal body is partly attributable to the presence of Sickert as a member and a moving force. Sickert was much older than most of its members. By 1911 he was 51, and widely recognised as a major painter with a substantial body of work behind him, even if his status and achievement was not fully reflected in critical commentaries of the time. He was also a talented and prolific writer and an influential teacher. In view of his towering reputation, having Sickert in the group must have felt rather like a club of normal-sized gorillas admitting King Kong as a member.

Seeing the paintings of Sickert together with those of the other members of the group vividly illustrates the artistic dichotomy between them. Sickert continued to paint in the way that he had formulated through his experience of late 19th-century painting, notably Degas and Whistler. In comparison with most of the other members, his colour range is narrow, his tonal range subdued. His use of impasto is restrained but effective. One can see why the younger members of the group grew to detest what they saw as a dark and dreary palette applied in a flat, boring and unimaginative way. On the issue of impasto alone, there was heated debate. Sickert published an article called The Thickest Painters in London, and he compared the indiscriminate use of impasto with attempting to be more expressive by shouting and gesticulating.

An inherent problem with much Camden Town painting was the tendency for forms to crystallise into rigid and inflexible units with hard outlines, producing a kind of topographical map of the subject. Sickert recognised that the visible world is a transient, mobile phenomenon, with forms and voids constantly flowing into one another as light washes over them. His remarkable portrait of Gilman, one of the highlights of the show, illustrates this process, with its dissolved profiles constantly escaping into the surrounding air. One feels that it was painted on a nervous knife-edge of acute observation and alertness. Gilman captured some of this quality, notably in his fine portrait of Sylvia Gosse. One wonders what would have happened to his work had his life not been cut tragically short by Spanish influenza in 1919.

Sickert welcomed the idea that he was a 'literary' painter. This did not mean that he set out to tell long and complex stories, but that his subjects always suggest a narrative of some kind. We find ourselves asking what the people in his pictures are up to, what is the relationship between them, what is going to happen. Is this woman a victim, or a lover, or perhaps a prostitute? Is this man a lover, or a client, or a murderer? Unlike so much Camden Town painting, his subjects always come over as people rather than models.

The exhibition is accompanied by an excellent catalogue, which also serves as a good summary history of the group. If I have a complaint it is that one of Sickert's best-known paintings has been reproduced 'flopped' (that is, reversed). Surely the proofs were read by someone sufficiently qualified and alert to pick this up. However, this is a minor quibble and I would recommend anyone with an interest in 20th-century painting to see it. 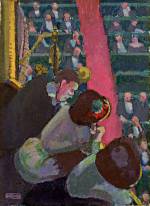 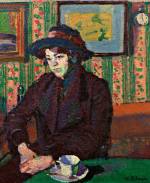