Rachel Howard – interview: ‘I like to contradict myself, trip myself up’

Rachel Howard – interview: ‘I like to contradict myself, trip myself up’

The artist talks about her interest in madness and the edge of things and the five large-scale paintings in her show l’Appel du Vide, which opens this month at Blain Southern in New York

Rachel Howard’s exhibition at Blain Southern, New York, this month, l’Appel du Vide, extends her exploration of states of mind and a fascination with challenging subjects: psychosis, suicide and melancholy. L’appel du vide, translates as “the call of the void”, the urge to self-destruct, the voice that tells you to leap off the edge, the fleeting impulse to swerve into oncoming traffic, the curious, “What if?” Howard is fascinated by the slippage between control and chaos. Her confrontation with such challenging aspects of human existence is achieved through almost alchemical means, where the very stuff of paint is manipulated, sometimes allowing the serendipitous employment of gravity, which enables the viewer to experience implied meaning from inert substances and triggers a heightened impact of pigment on the retina.

The Blain Southern show presents five large-scale paintings dominated by a single hue – alizarin crimson – in which the artist has pushed paint through lace curtains to imprint the complex patterns on to canvas. Aspects of the pattern are distinct in parts, while in other areas of the canvas it is obliterated, creating blood-red pools of paint. Applying and reapplying the paint-soaked fabric with varying degrees of intensity generates the emergence and re-emergence of pattern in a sequence of gesture and erasure.

In Howard’s obsessive handling of the matière of paint, she succeeds in achieving a curious limbo, a space between external and internal aspects of life. Titles such as Missive to the Mad (2019) and Missive to the Sad (2019) confront society’s reluctance to discuss mental illness and the lack of understanding of these societal taboos. Her importance as a painter lies in the naturalness with which she navigates a sure independent path while remaining receptive to a wide range of influences. In this, the immediacy of drawing occupies an important role. She once told me: “Drawing for me is drawing my thoughts, realising and giving clarity to even the tiniest of ideas. Also the pure enjoyment of the materials, the ink, the paper, the way the pigment is absorbed, the weight of the ink on the brush. I’m influenced, like many artists in the past, by East Asian calligraphy, writing as drawing, drawing as writing.”

Her painting conveys a sense of veiled memory, where an air of melancholia is conjured, yet her work is essentially life-affirming. Her creative processes reinforce the crucial role of art and of creativity in human life and the necessity of challenging the political madness and corrupt values that dominate the present world.

Howard was born in 1969 in County Durham. She graduated from Goldsmiths College, London, in 1991. She lives and works in London and Gloucestershire.

Janet McKenzie: The title of your exhibition at Blain Southern in New York, which opens this month, translates as the “the call of the void”, which is an intense and dramatic phenomenon. Can you explain how you discovered L’appel du vide?

Rachel Howard: I think we all have this urge to a greater or lesser extent. I’ve always had this feeling, most recently when I was in the theatre in London. The only seats I could get were in the gods – you know right at the top, the highest part, so high up that the actors look like ants – and I had this desire to jump off over the balcony. It’s the same reaction I have sometimes when I’m driving on the motorway and a fleeting thought goes through my mind, what if I just swerved now at high speed in to oncoming traffic! But L’appel du vide is actually a positive phenomenon, as this “will” is quickly replaced by the will to live. It’s a life-affirming psychological state. It’s also known as high-place phenomenon. When I came across some literature about this on the internet, I was sharply reassured that I wasn’t the only freak around and that it’s a common sensation. I also like the French title for the exhibition as a nod to my solidarity with the European Union.

JMcK: This is not the first visual exploration you have made of states of mind. How do you insinuate the edge of reason, the fear and the chaos of mental states through paint?

RH: I’ve always liked to explore the edges of things. I’m fascinated by madness and what exactly that is, either how society defines it or how it can manifest itself, how we’re all a hair’s breadth away from the “edge”, how one day can be fine and the next so unsettling and warped. I enjoy playing with contradictions: confusion, clarity, reason, unreason, entropy and order, for example. In my large “red” painting, I use vast swathes of patterned nets, which act as massive paint brushes I can sweep round or across the canvas. The pattern acts as an ordered calm in places, only to be blurred and obliterated in others. The eye seeks again for solace in the ordered areas, then is pushed and pulled round and back and forth in the pictorial plain. It’s a way to imply disorder and uncertainty without being too explicit, I hope.

I think I’m most interested in a quiet madness, though. The one we all feel but are too scared to acknowledge to others or even to ourselves, where things slip slightly. The large red paintings in this show, Love Fool, Mouth to Mouth, High Flyer, If It Sounds Like This and l’Appel du Vide all have fluorescent yellow paint on the top and bottom edges of the canvas that is visible only by a gentle glow it gives off against the wall.

JMcK: You allow an accidental methodology to play a part in the final artwork by harnessing gravity and exploring the materiality of paint, the way an alchemist might. Can you explain your methodology and how it has evolved in your new work?

RH: Yes, in other smaller works, I build up the surface first with a base of fluorescent acrylic – either yellow, pink or green – in the hope that, even if the tiniest bit peeps through in the end painting, it will have done its job. Then I continue to paint and sand back light hues of oil paint. Eventually, after quite some time of getting the ground right, I construct a painted black grid on the surface using a T-square. The final act is one of dissolution. I use gravity as a sort of silent paint brush. To unpick or shift the paint in a final act of erasing some of the built-up structure, I’ll pour varnish down the canvas. It’s a balance of control and abandonment: the end result can either gently nudge the grid out of shape or tear it apart completely.

JMcK:  The edges of paint create an energy within your paintings that can be quite breathtaking, like a metaphysical collision or a fright. Who exerted influence on you as a student and who inspires you now?

RH: Oh, where to start? I studied art history at university, too. I did a joint honours and I would describe it as trying to paint while beating yourself with the whole of art history at your back, screaming at you, telling you you’re shit! I really didn’t find my feet until after leaving Goldsmiths, when I could get away from the history side of art, and also the deeply conceptual school that Goldsmiths is, and allow myself to enjoy the actual material of paint, what it is, what it can do, and fuck around with it. Just play basically, whether it was with household gloss, working with these fabrics as brushes, spraying, pouring, smearing or being a “proper” painter – by that I mean representational. But my work has always pushed and pulled between joy and pathos and is unadulteratedly emotional. I like feelings.

So, in answer to your question, I think everything from Etruscan pottery to Andrei Tarkovsky to Walter Sickert to Jeff Koons, Snoopy to Vladimir Nabokov and everything in between. But I really think it’s escaping all these things, first to absorb everything, then to reject it all in order to find your own way.

JMcK: I have always associated abstract art not with Britain, but with the New World – America or Australia – where the minimal or bold gesture reflects a belief in the artistic potential in the unknown or unfamiliar. It is exciting that you are showing in New York, presenting abstract art that is replete with exploratory meaning.

RH: Helen Frankenthaler, Morris Louis, Mark Rothko, Yves Klein, Cy Twombly, Joan Mitchell: what’s not to love and admire? These are the artists who made me want to paint my abstraction, which, in actual fact, I feel, always relates to the corporeal, in the sense that I have no plan as to what I’m going to paint on any given day: my body makes these decisions, these choices. I like the frisson of fear when I step into my studio. What will I find out today? What conundrum can I resolve within the canvas? Then, later, the cerebral kicks in; I think that’s what makes abstraction so sublime when it succeeds.

JMcK: There is a duality at play in your work: an understated palette against fluorescent under painting, or the canvases in this show that are predominantly crimson? And you explore melancholia and loss, yet you are upbeat and make life-affirming works?

RH: I see colour as a cheat: you know that if you put orange next to turquoise or a light blue, it’s pleasing to the eye, the canvas will sing; painters know all the tricks, so it’s important to challenge the tricks. It’s like being ahead of the mind-fuck games we play on ourselves in life, except artists play it all out on the canvas or whatever they work with. These red paintings are hardly shrinking violets though! I like to contradict myself, trip myself up, double back. It’s not a job; it’s a quest for some sort of clarity through the murky waters. 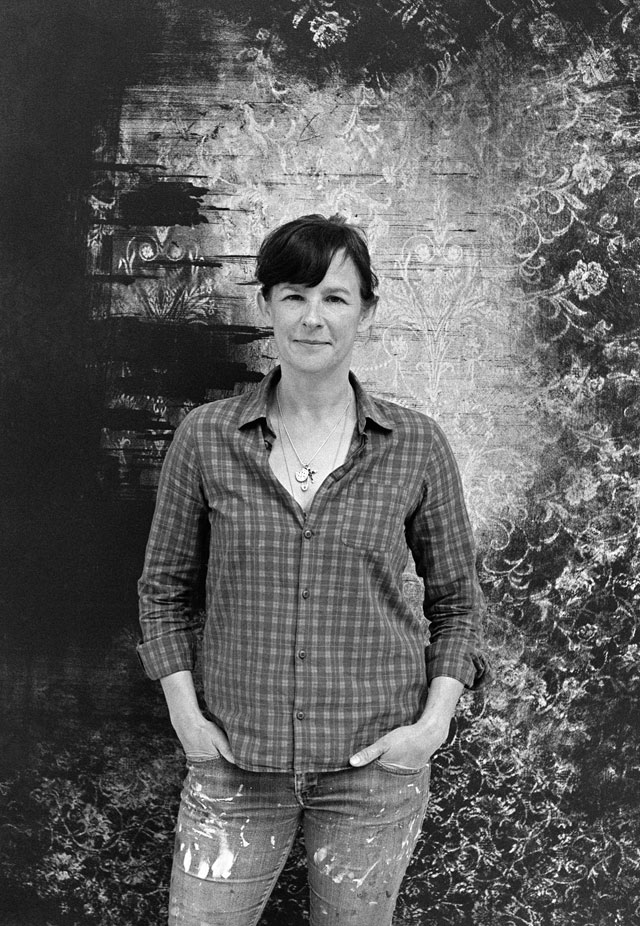