All Too Human: Bacon, Freud and a Century of Painting Life

All Too Human: Bacon, Freud and a Century of Painting Life

Tate Britain’s All Too Human explores family, sex and death, and offers a fantastic chance to explore what connects some of the biggest names of the past 100 years 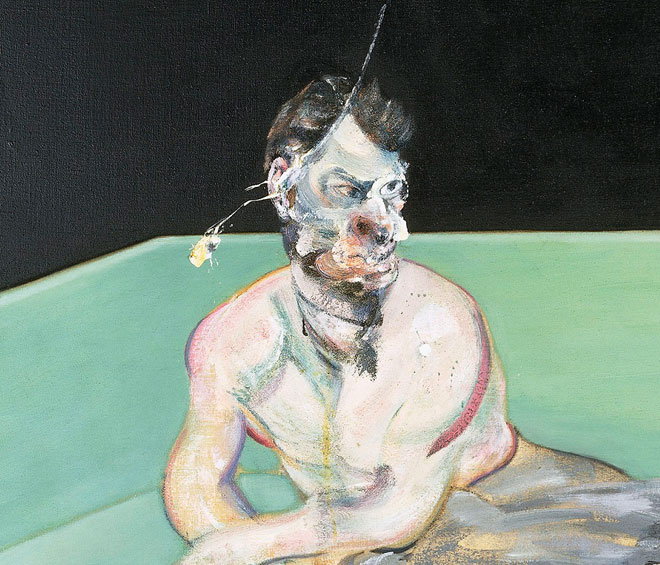 What a treat it is to see Francis Bacon and Lucian Freud’s work in the same exhibition. A portrait of Freud by Bacon, which has not been exhibited in public for 50 years, might very well be the star piece of the show. Freud’s hairline and pale torso are instantly recognisable, but his face is smashed into a creamy mess. He seems to sidle along a pale green sofa, more monster than man, his legs melted into a single grey mass.

Bacon was a master of rendering human distress in the gaping mouths and twisted bodies of his subjects. Three Figures and a Portrait (1975) depicts writhing grey torsos in the grip of some tortuous pain. The most complete figure is thought to be that of George Dyer, Bacon’s lover, who took his own life with an overdose of sleeping pills. Compare this body with that of Freud’s Naked Portrait (1972-73), which captures the awkwardly positioned limbs of his model as she half curls up on a brass bed, her eyes glazed over, as though she is processing some internal pain. Both artists knew a thing or two about the human condition. 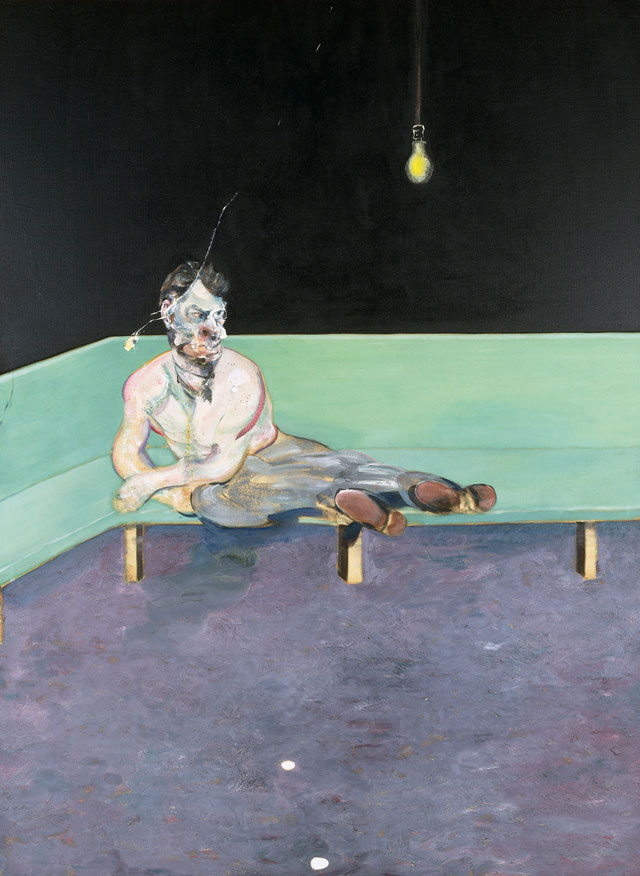 What it means to be human is the very crux of this exhibition; sex, death and flesh are recurring themes. Walter Sickert and Stanley Spencer introduce desire in the first room, but it is desire with a sting. Spencer was obsessed with Patricia Preece, who used her influence over him to manipulate and eventually extort money from him. She is in two portraits here, and whether clothed or baring her long, large breasts, she is a formidable, determined force with a stony face. 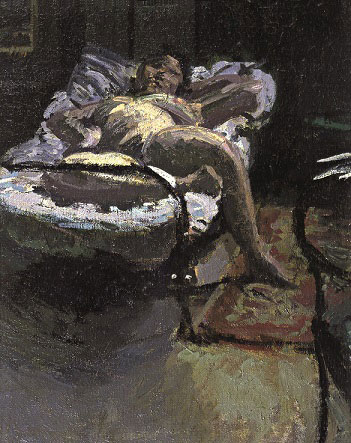 Sickert’s figures, in the sparse, grimy surroundings of the artist’s dingy Camden lodgings, speak of destitution. He, famously, painted women sprawled out on grimy beds, their yellowy flesh lit by an unflattering, threatening gloom. They are naked, rather than nude. There is no pretence of seduction; there are no pretty faces or coy smiles. These are women leading perilous lives on the fringes of poverty. In The Studio: The Painting of a Nude (1906), Sickert places himself in the scene as the menacing, clothed male, a trope which became a hallmark in a series of paintings that came to be linked with a notorious local murder. His arm, wielding a paintbrush like a weapon, bisects the picture, a dark presence in the foreground. The model’s face is barely more detailed than a roughly cut block of wood; instead, our attention is drawn to her pale, naked buttocks reflected in the mirror at the back of the room. 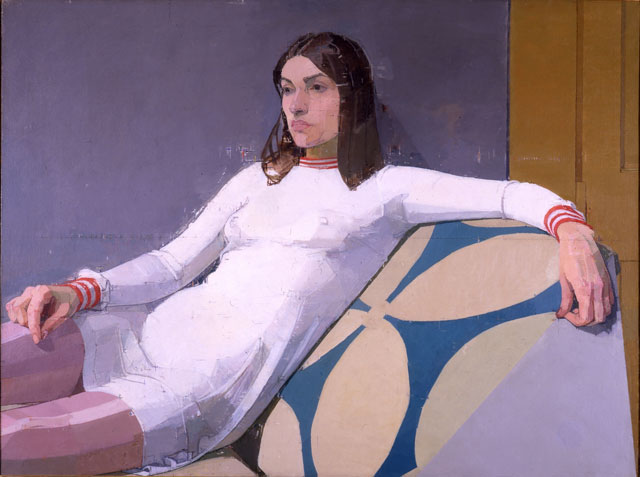 Euan Uglow’s painting stands a world apart from that of Sickert’s scenes of foreboding. Uglow, who learned his craft from the equally meticulous William Coldstream, is sometimes disregarded as passionless. It is true that he was a stickler for precision, and that his paintings are far more sanitised versions of the naked body than, say, Sickert’s. But they are undeniably beautiful, and his nudes are, in fact quietly, and brightly, erotic. Uglow spent a huge amount of time with his models, many of who were friends, because his paintings took so long to complete. His portrait of Georgia (1973) took him five years to complete. He asked the model to cut her hair to shoulder length, dyed her tights the desired shade of pink and designed the fabric on which she is reclining, all so the painting could fit together as a perfect piece of design.

Uglow and Coldstream were part of the Slade School, and form, perhaps, an unlikely bridge to Freud’s work. Coldstream employed the young Freud as a teacher and some of his early works sit in the same room. Freud absorbed the same lessons about colour, about the proximities of tone, the importance of the relationship between a model and their surroundings and how to really, really look, and this served him well throughout his career. His unerring, sometimes predatory, gaze registered every human imperfection on the surface of his subjects’ bodies. And his painting would develop, if not the dark undertones of Sickert’s nudes, then certainly the love of meaty flesh and a preference for sparse, threadbare rooms. 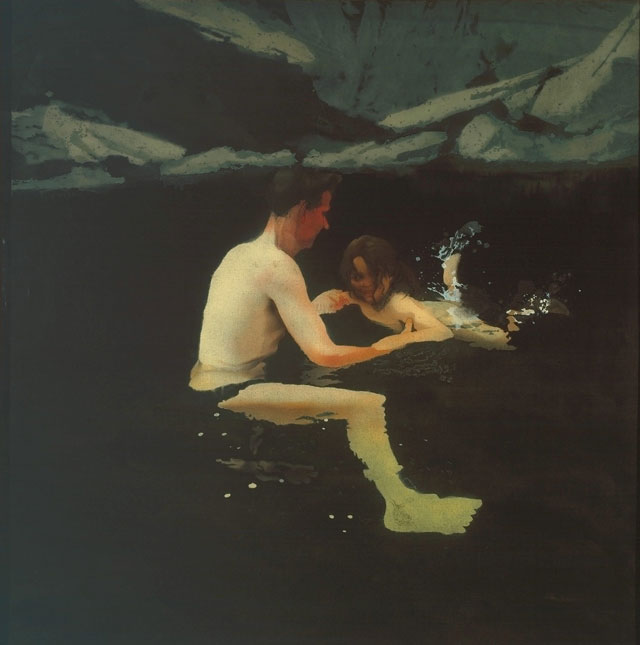 Michael Andrews was part of the loosely associated group known as the School of London, along with Freud, Bacon, Frank Auerbach and Leon Kossoff, but he never quite achieved the same level of recognition. There are three of his canvases here, in a room with the works of RB Kitaj, including what is arguably his most famous painting. Melanie and Me Swimming (1978-79) was painted from a photograph of the artist in Scotland teaching his daughter to swim. It is a touching ode to parenthood; the guidance before the letting go, but there is also a sense of threat. The dark waters make the pale bodies of father and daughter seem all the more vulnerable. The paint is applied with the thinnest of washes, so that it does little more than stain the canvas beneath. It is an image of strength and vulnerability in one, a painting with universal appeal.

Happily, Paula Rego has a room to herself in this exhibition. Her triptych The Betrothal: Lessons: The Shipwreck, after ‘Marriage a la mode’ by Hogarth (1999), depicts the story of an arranged marriage inspired by a series of paintings by Hogarth (Marriage A-la-Mode, c1743). In the first panel, two mothers broker a marriage between their children, and there are hints of dark times to come with a sinister scene between a couple in a doorway in the background. In the last image, the betrothed children, now adults, form a modern pietà, in which the wife cradles her husband, who is either dead or asleep, and who has become childlike in his misfortune. The woman’s face is fixed in an alert, determined expression, an unmistakable reference to Rego’s own marriage and her late husband’s illness.

The last room is dedicated to Jenny Saville, Cecily Brown, Lynette Yiadom-Boakye and Celia Paul, all of whom seem a little tagged on to the end. This is a chronological exhibition, so these younger artists bring us up to date, but it feels a touch conciliatory. Paul’s self-portrait adds a powerful closing remark, which ties in with the threads of influence that run throughout this exhibition. She was taught by Freud at the Slade, and her love of the stuff of paint is undisguised. The second of her paintings, Family Group (1984-86) has the same monumentality of a Rego scene; strong, solid women, Paul’s mother and sisters, cram on to a bed in a grey room, each lost in her own thoughts. There are so many connections to be made here, so many threads of influence and history that tie these artists together.

Many of the artists featured were immigrants who came to London to study or escape persecution, or both. And the rich legacy of their contributions to British art is immeasurable. But other artists are strangely absent. Peter Doig, who was influenced by Andrews, would have perhaps bolstered the contemporary section of the exhibition. And David Hockney would have added a touch of sensuous joy to a show exploring some very dark themes. But the stuff of being human is about as broad a category as a museum could tackle. And while this exhibition occasionally loses its way with landscapes that seem oddly placed in a show built around the figure, it is absolutely crammed with treasures. 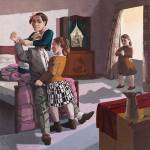 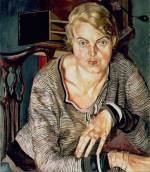