Through film, sculpture, painting, costume and photography, this wild party of an exhibition celebrates 40 years of Clark’s work, extending beyond modern dance to visual art, music, costume and set-design

Michael Clark: Cosmic Dancer is a wild, adventurous party of an exhibition. It is a celebration of being alive, and the cast of artists, dancers, musicians and fashion designers is mesmerising. It is also a serious assessment of Clark’s presence in Britain’s recent cultural history, a presence that has challenged ideas of conformity and conservatism, brought outrageous costumes and set designs to his choreography and continued to push the boundaries of dance and visual art. 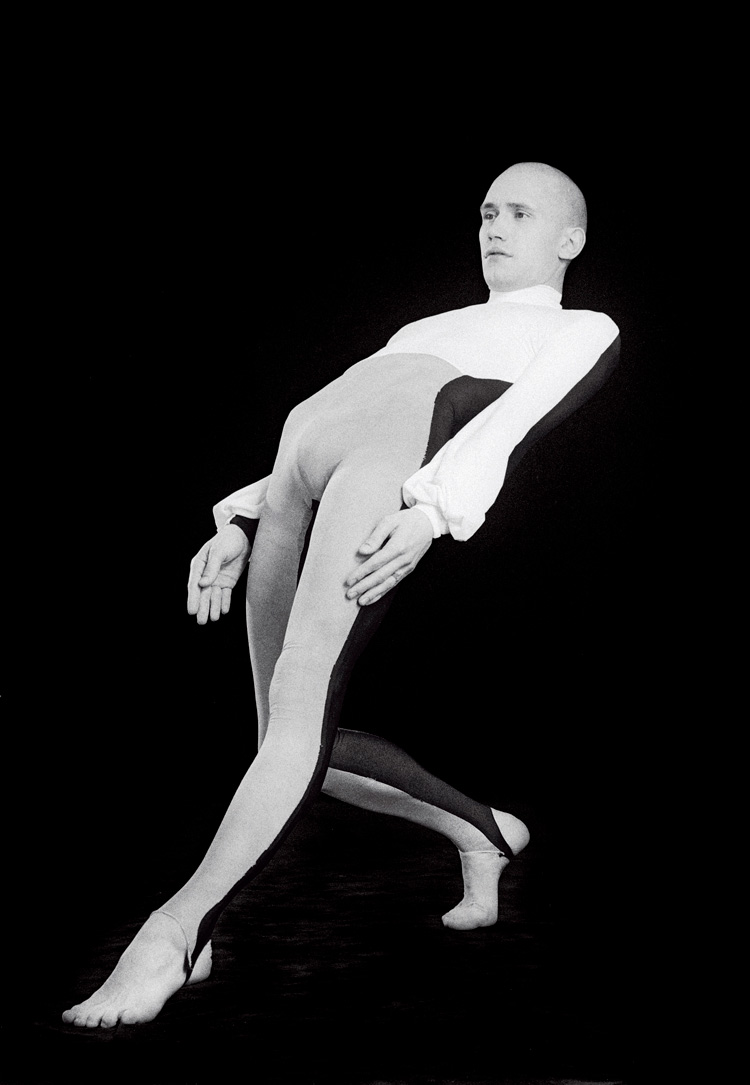 Michael Clark in a publicity photograph for Mmm…, 1992. © Hugo Glendinning.

Born in Aberdeen in 1962, Clark began his dancing career with traditional Scottish dance from the age of four. In 1975, he was invited to train at the Royal Ballet School in London before joining the Ballet Rambert in 1979 and embarking on more contemporary forms of dance. After participating in a summer school with Merce Cunningham and John Cage, Clark created his first independent work in 1982, aged just 20. The following year he became choreographer at London’s Riverside Studios and, in 1984, he formed his own dance company. He has said: “I try to make dance that isn’t about dance, not just for other dancers to see.” This statement gets to the heart of what Clark is about. His classical training is not discarded, but brought to bear on the vibrancy and energy of pantomime, drag, queer culture and punk. “I wanted to say yes to all those things, to acknowledge those elements as part of the visual aspect of dance, which has to include how people are dressed.” 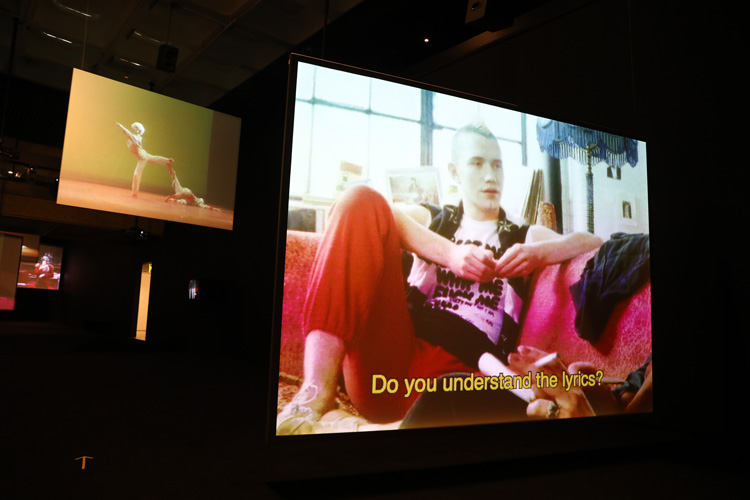 The exhibition begins with a phenomenal multiscreen installation created by Clark’s long-time collaborator Charles Atlas. The film A Prune Twin (2020) stretches across nine screens and four monitors, creating an immersive experience that invites visitors to move through the gallery space rather than take up a static point of view. Atlas’s idea is to “translate to the screen the kinaesthetic experience you get from watching live dance” and it works beautifully. The viewer is sucked into Atlas’s anti-documentary, a re-edit of two previous films on Clark, Hail the New Puritan (1986) and Because We Must (1989), and a fictional account of Clark’s life as a young dancer. Atlas’s film is totally enthralling and sets the scene perfectly for the rest of the exhibition. 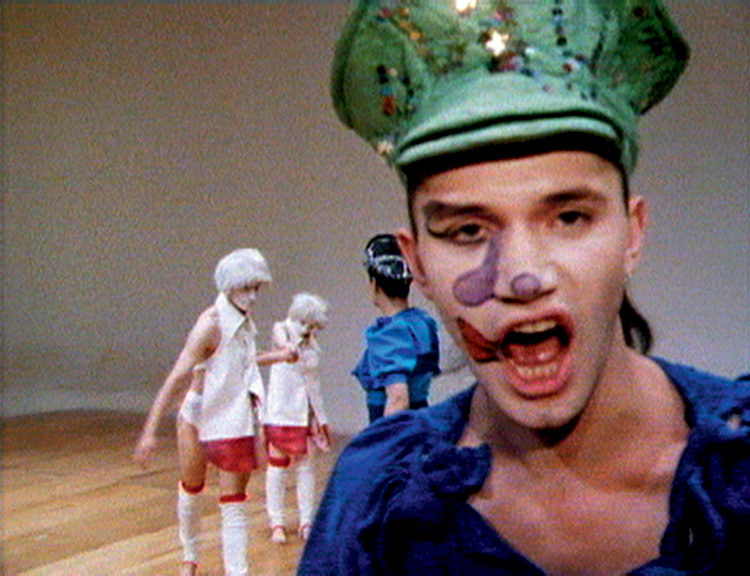 Everything in this exhibition is interconnected. There is art from Trojan, who lived with Leigh Bowery. Bowery appeared in Atlas’s film and, along with the BodyMap fashion label, also designed the costumes for I Am Curious, Orange (1988), Clark’s collaboration with the band the Fall. Bowery designed costumes for Clark from 1984 until his death in 1994. Bowery was well known on the London club scene, and his costumes were based on what he wore every day. Like Clark, he was interested in challenging norms of gender, sexuality and beauty. Clark choreographed some of BodyMap’s fashion shows. Stevie Stewart, co-founder of BodyMap, continued to design costumes for Clark after BodyMap ended in the late 80s, including unitards for The Stravinsky Project Part 3: I Do (2007).

Clark’s interest in Igor Stravinsky’s music is longstanding. Among the archival film footage on show, we see Clark visiting the grave of Serge Diaghilev, the founder of the Ballets Russes. Stravinsky composed music for the Ballets Russes, including the compelling rhythms of The Rite of Spring of 1913, originally choreographed by Vaslav Nijinsky in Paris that same year. Alongside this, we see Clark’s astonishing choreography of The Rite of Spring as dancer Joanne Barrett twists and reforms her body. Other films here include Clark’s solo in Soda Lake (1981), Derek Jarman’s Working for Pleasure (1984) and The Shivering Man (1986), a music video featuring Clark.

The artworks inspired by Clark and his performances are thrilling to see. The upper gallery spaces at the Barbican are really used to their best advantage here and we see work by Peter Doig, Sarah Lucas, Wolfgang Tillmans and others. Doig’s engagement with Clark is complex, with myriad connections. One aspect of that is Doig’s painting Portrait (Corbusier) (2009), made for the set of come, been and gone (2009) by Clark. It is shown here with a silent 16mm film by Clark, shot on the rooftop of the Cité Radieuse apartment block in Marseille, designed by Le Corbusier in 1952. Lucas, with whom Clark lived for a while, created a new version of her Tits in Space (2000-20) wallpaper for the exhibition. Lucas and Clark have a shared interest in sexuality and body language that emerges in her costumes and set design for his Before and After: The Fall (2001).

Some of the most interesting artworks in the exhibition are 10 paintings by Silke Otto-Knapp. The artist uses a restricted palette, and the paintings have their own rhythm. Her particular medium and methods soften the images, and the bodies in silhouette give a different perspective on Clark’s choreography as we visually renegotiate weight, gesture and movement in the paintings. Otto-Knapp’s monochromatic paintings are echoed in Duncan Campbell’s collaborative film It for Others, made with Clark in 2013. The bird’s-eye view of dancers performing neat scripted actions is shot in black and white.  The precision actions and patterns hark back to the Bauhaus and Oskar Schlemmer’s “mathematics in motion”. They also recall the rigour of the Cecchetti Method, which was important in Clark’s ballet training. That Clark continues to stimulate visual artists to make such work is evidence of his enduring importance in dance and the arts more broadly.

Bringing these various strands of influence together in a single exhibition shows just how important Clark’s presence has been for the last 40 years. Not only does his reach extend beyond modern dance to visual art, music, costume and set-design, but his interests range from classical music to punk and rock, from Karl Marx to Le Corbusier. There is film, sculpture, painting, costume and photography in this exhibition to mark the 15-year anniversary of Michael Clark Company’s partnership with the Barbican. More than that, this is about Britain’s cultural history and Clark’s remarkable role in it, particularly in redefining gender representation and stereotypes. Go and see it, be uplifted and join in the celebration of Clark’s remarkable achievements.