For the first time, a Flemish Primitive shines in the capital of the Italian peninsula, as the Scuderie del Quirinale offers an unprecedented loan of paintings by Hans Memling, the favourite of the Italian community in Bruges

At the height of the Burgundian influence in Europe, the Low Countries became the political and economic centre of northern Europe. Flanders, as part of this vast empire, delivered the leading artists of the period. They are now known as the Flemish Primitives, a term derived from the French to allude to the new, innovative oil technique they employed in the closely detailed objects, landscapes, and faces that poster-boy Masters, such as Jan Van Eyck (c1395-1441, Hugo van der Goes (c1440-82) and Rogier van der Weyden (c1400-64), depicted in their charming yet highly sophisticated oeuvre. According to the German art historian Erwin Panofsky, this group of highly skilled artists were able to paint “gold that looked like gold”, and, indeed, it is this kind of naturalism that gives their subjects a complex array of emotions and a rendering of minute detail.1

Hans Memling (1430-94), the German-born star of this autumnal show who was perhaps trained by Van der Weyden, equally takes his place among the Flemish Primitives, but outshines the earlier generation of Masters by benefiting from their reputation and by, very early on in his career, carving himself a specific clientele. Fifteenth-century European trade forged a solid relationship between Flanders and Italy on an economic and financial level, linking important cities such as Bruges and Ghent in the north and Florence and Genoa in the south. This connection created an ideal highway for transporting and exchanging goods, men and merchandise from one end of Europe to the other. Important functionaries on business also journeyed on this route. This travelling and wealthy bourgeoisie, comprising not only the Medici, but also the Tani, Portinari and Baroncelli families, secured a continuous flow of valuables such as tapestries, jewels, paintings and manuscripts. Memling, who would become the most sought-after portraitist of his day, displayed the highest standards of technical proficiency and pictorial sophistication in his work that ranged from paintings for personal devotion to large religious panels, and hence managed to attract a number of important patrons such as the Portinari family, in the course of his early career.

Memling. A Flemish Renaissance is an aptly chosen title for an exhibition that not only explores the artist-patron association, but several relationships. As art historian Till-Holger Borchert says in the press release: “Italian painting in Florence and elsewhere was considerably influenced by imported Flemish paintings, establishing that the work of Hans Memling played a particularly important role in this process.” The display also seeks to explore in what way Flemish Masters may have used Italianate elements in their work and looks at the work of younger generations in Flanders and Italy who were influenced by Memling. Although these relationships are not always as convincing, the offer, albeit wrapped in a rather dull environment, is unprecedented and very impressive.2

The visitor is guided through Memling’s long and successful career in seven elaborate sections that showcase early work alongside that of Van der Weyden (The Visitation, 1445-1450), major commissions produced for his Italian patrons in Bruges, portraiture that provided a model for a next generation of painters, narrative painting, small devotional altars for personal use and a number of grand triptychs.

A particular highlight hits the visitor on entering “A Life”, where the Portrait of a Man holding a Roman Coin of 1473-4 and Portrait of a Woman of 1480-1485 are juxtaposed, their technical brilliance seen in soft curls and a feather-light veil immediately emphasising why, to quote the exhibition panel, Memling would have been on the “white pages” of the social elite. In “Master of Portraits”, the Scuderie del Quirinale has assembled eight portraits representing the likenesses of merchant-bankers working in Bruges. It is here, in rosy cheeks and expressive eyes, we see the extraordinary realism that Memling brought to his portraits, often characterised by a half bust in prayer pose. Memling’s Portrait of Benedetto Portinari (1487), whose family were bank managers for the Medici, and the Portrait of Ludovico Portinari by the Master of the Legend of Saint Ursula c1475-80, in addition to Memling’s monumental The Moreel Triptych (1484), which travelled here from Bruges, serve as examples, both of Memling’s continued influence on contemporaries and his reputation as top portraitist of the period.

The remarkable Passion of Christ (1470) on display in “Memling as a Narrator” contains 200 figures and 23 scenes, and is almost reminiscent of a Brueghel. It was, again, commissioned by Tommaso Portinari, the manager of the Medici bank in Bruges, and demonstrates Memling’s extraordinary skill for narrative detail. In “Reinventing the devotional image”, a number of smaller devotional images in the form of portable altars are juxtaposed with larger works such as the recently discovered (2013) Blessing Christ of 1480-85. These smaller images, such as a Memento Mori, Vanitas, Coat of Arms, Godfather in the Heavenly Glory, The Devil on the Mouth of Hell, which Memling painted in around 1485, did not only enhance the wealth and status of the donor, they were actively used as images of personal devotion and were immensely popular in the 15th century.

In subsequent sections, Memling’s contemporaries and later “copyists” are shown, including the Master of the Legend of Saint Ursula and the Master of the Legend of Saint Catherine, whose graceful yet lesser quality Annunciation of 1490-1495 is seen. These final rooms equally examine the Italian influence on the Flemish Renaissance, considered in the rendering of putti and designs from classical antiquity Memling presumably found in Donatello and depicted in, for example, Triptych of the Resurrection (1480-1485).

The apotheosis of Memling. A Flemish Renaissance is suitably grand, with the Pagagnotti triptych (c1480) brought together for the first time. The central panel with a Madonna and child with two angels travelled the short distance from the Uffizi, while the side panels representing Saint John the Baptist and Saint Lawrence, crossed the European continent from the National Gallery in London, a suitable metaphor for Memling’s international appeal.

The Scuderie del Quirinale has done well in setting up an excellent exhibition on a much-loved member of the Flemish Primitives. Visitors will probably never again get the occasion to see so many works of the artist united under one roof and so this, rather traditional, show is a treat. But then does Memling need pomp and circumstance? I think he can gracefully fend for himself.

1. Renaissance and Renascenes in Western Art by Erwin Panofsky, published by Harper & Row (New York, 1969), page 163.
2. Among others, loans come from: The Groeninge Museum in Bruges, The Royal Collection in London, The Louvre in Paris, The Frick Collection and the Metropolitan Museum in New York, The National Gallery of Art in Washington, and the Koninklijke Museum voor Schone Kunsten in Antwerp. 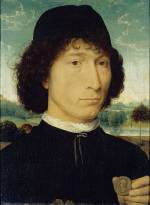 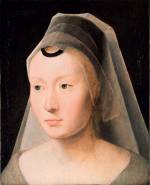 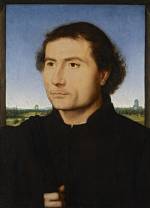 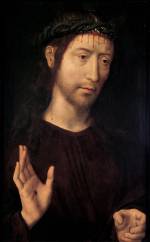 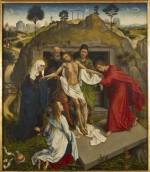 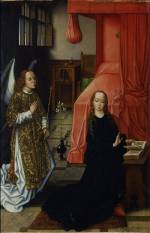 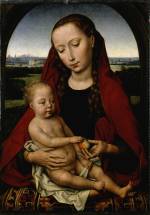 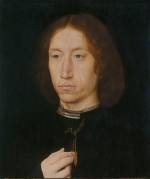