Drawing in Silver and Gold: Leonardo to Jasper Johns

Drawing in Silver and Gold: Leonardo to Jasper Johns

This, the first show ever devoted to metalpoint, includes works by some of the greatest artists and is the finest exhibition dedicated to the history of drawing that we are likely to experience.

Some of the most breathtakingly beautiful drawings are on show at the British Museum. Drawing in Silver and Gold: Leonardo to Jasper Johns is an exhibition that celebrates a particular technique over a period of six centuries and is the first show ever devoted to metalpoint: the art of drawing with a metal stylus. It is at once radical, original and very beautiful, with works by some of the greatest artists, from Albrecht Dürer and Leonardo da Vinci to Hans Holbein and Rembrandt; present-day exponents of the medium include Bruce Nauman and Jasper Johns. The images are intimate, usually small, and often very personal such as Dürer’s dog or Holbein’s younger brother. All the works in the exhibition share the paradoxical attributes of metalpoint that of precision and delicacy.

Drawing in Silver and Gold: Leonardo to Jasper Johns is a collaboration between the National Gallery of Art, Washington DC, and the British Museum. The exhibition and accompanying publication, a superb book of the same title, present new material and information on metalpoint in Europe, Great Britain and the United States. The most important and most obvious periods and places for metalpoint are discussed in the light of new research: the Renaissance in Italy, the Netherlands and Germany. So, too, are the lesser-known periods of the 17th century in the Netherlands and Victorian England. There is also an interesting overview of modern and contemporary artists working in the medium. Curators, scientists, art historians and conservationists from the US and the UK have created a most fruitful collaboration. Non-invasive technical analysis of the British Museum holdings has enabled new understanding of the processes and respective historic contexts.

Metalpoint involves drawing with a fine metal stylus on to paper or parchment that has been coated with a slightly abrasive surface. Substances such as ash, ground bone or lead white are mixed with gum and applied to enable a residue of metal to remain, a faint silvery trace on the surface. In time, the metal is oxidised in the air, turning the faint metallic line to numerous subtle shades of gold and brown. The first portrait in this show, by Rogier van der Weyden (c1430) possesses the hues of a sepia photograph. The fine metal tip creates the most delicate of lines, but once applied cannot be erased. A single mistake and a drawing could be ruined, yet one characteristic of the remarkable works on show is their challenging range of marks, the ambition on the part of the practitioners. Metalpoint requires detailed planning.

The finest example of the medium is generally considered to be Leonardo’s Bust of a Warrior, one of the British Museum’s best works, executed in the late 1470s in Florence. Leonardo’s soldier is a ferocious man: a marvel of marks from crosshatching, stippling and shading, all created with the tiniest dashes and loops. Leonardo evokes both soft flesh and metallic patterned armour with a great economy of means, making it one of the most widely admired drawings in the history of art. The emotion evoked is as real as photograph, but very much more charged centuries on. A decade earlier, the silverpoint study of Saint Mary Magdalene from the circle of Van der Weyden indicates a very different approach. He uses a complex system of parallel lines and cross-hatching to shape the cheek, represent the hair and the subtle reflection of light on her eyelids and jaw and minute tears to denote pain. The marks, so beautifully orchestrated, indicate the complete immersion of the artist with subject on a primal mark-making level. Indeed, there exists within the exhibition of a level of the unaccountable, a miraculous quality in the way the subject has been rendered so intimately, so perfectly, qualities that slipped from grace in art academies as realism failed to equip artists to engage with modern ideas through a greater part of the 20th-century.

A revived interest in drawing over the past 20 years has gathered apace, leaving even the greatest connoisseurs of the modern drawing in awe of the singular sense of perfection that was aspired to by the Renaissance masters. One senses that the acknowledged limitations of metalpoint – it cannot be erased, has limited range of tones compared to chalks, the stylus leaves a fairly uniform mark – are embraced, to create greater challenges to create evanescent line and technical proficiency. The medium of silverpoint enabled the creation of anatomical perfection in Rembrandt’s portraits of his recently betrothed wife, of Dürer’s first self-portrait in three-quarter view, produced at the age of just 13. It enabled superb studies to be made of airborne saints; in the Italian workshops of the Renaissance, silverpoint drawing occupied an important practical role for future paintings, for, unlike chalk, it did not smudge so was longer lasting, and the overriding intention was perhaps the correctness of the anatomy. In numerous works, it is possible to feel the remarkable connectedness the artist had with the subject, the intense focus and striving for perfection. In today’s terms, one can view many of these exquisite drawings as having a purity of intent, as well as the sense of immediacy that drawing provides. Because the studio works did not play a public role, for a patron or the market place, the artist’s integrity is at its height.

In Northern Europe during the Renaissance, the role of silverpoint differed significantly. Flemish artists drew more private subjects: their wives, siblings, children and pets and thus the drawings were an intrinsic part of the artist’s life and narrative.

In the 17th century, silverpoint was viewed as something of a curiosity; miniature artists used it in combination with watercolour to enhance detail and increase clarity, particularly of faces. Metalpoint drawings experienced a revival in 19th-century England where pre-Raphaelite artists such as William Holman Hunt and Edward Burne-Jones consulted a number of the same drawings that are on show in Drawing in Silver and Gold. In 1896, Winsor and Newton is first known to have begun making and marketing a silverpoint kit in America. The Victorians were directly inspired by the revival of interest in art from the 15th-century, which saw the publication of facsimiles of books and studies of Renaissance art from public collections. For travel the “metallic notebook”, as it was known, saved carrying an inkwell or having to sharpen pencils. Lead-based stylus were mass-produced and used by Burne-Jones and Frederick Leighton. Holman Hunt described the medium, saying: “The limitation of means is not an evil in the fine arts.” GF Watts used Leonardo’s method of jotting down gestures and poses. Tinted grounds, as previously, added volume to forms.

Joseph Stella’s Portrait of Marcel Duchamp (c1922) reveals the minutely detailed, stark use of silverpoint. Man Ray, too, experimented in the 1920s, and Marsden Hartley made still-life and landscape works of great precision, capturing a tension between naturalism and abstraction, his linear forms resembling the finest wire constructions, in delicate grey, a distillation of reality. Otto Dix made more than 200 silverpoint drawings of portraits, nudes, landscapes and preparatory works for paintings. There is a nakedness about his nudes; crisp, distinct lines at once exploratory and certain. The choice of metalpoint for Dix was a way to align himself with the old masters, particularly Dürer, the father of German art. In doing so, he made a mockery of the Nazi regime that sacked him from his position at the Dresden Academy on the grounds that his art was “degenerate”. Self-Portrait As a Draughtman  (1933) is a superb and defiant statement about the key role of freedom of expression, paying homage to the craft and integrity required.

Drawing in Silver and Gold: Leonardo to Jasper Johnsunites draughtsmen and drawing across six centuries through a single hugely important medium. Inevitably, through the long-lasting material and the challenges it poses, it becomes the finest exhibition dedicated to the history of drawing that we are likely to experience. Perhaps the fact that while working with a metal stylus the artist does not have to break concentration to sharpen a pencil or dip a pen in to ink – in metalpoint drawing the unbroken connectedness with the subject is unique – explains the rare cohesion between artist and subject. 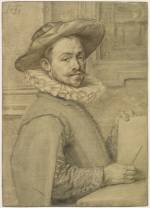 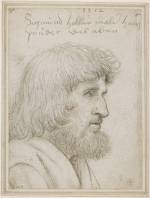 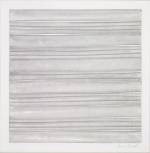