Melbourne Art Fair 2006: A Celebration of Indigenous Art and Beyond

Melbourne Art Fair 2006: A Celebration of Indigenous Art and Beyond

In August, more than 26,000 visitors flocked to the biennial Melbourne Art Fair, considered by the Australian Arts Council to be among the top three contemporary art events in the Asia Pacific region.

Greeting those in attendance to buy art or view the exhibited works was 'Cosmo', a giant inflatable rabbit created by renowned Maori artist Michael Parekowhai. The perky and innocent Cosmo, measuring 8.5 m in height, hinted at the monstrous damage that this invader had wrecked upon a defenseless landscape and, perhaps, alluded to the colonising Europeans who had introduced the creature to the Antipodes.

That Cosmo was given prime position beneath the great dome of the 126-year-old grand Royal Exhibition Building - Australia's first World Heritage-listed building - hosting to the event served to echo the organizers' sense of humour.
After this eye-catching introduction, viewers moved on to 3,000-plus works, creations of more than 900 artists, displayed in over eighty galleries. The breadth of the themes addressed by the artists shown was impressive. While indigenous art dominated, works from ten countries, particularly East Asia, were presented: Australia, New Zealand, China, Japan, Korea, Taiwan, Malaysia, Germany, Italy and the Netherlands.

Given Australia's own recognition - and auction values - it was not surprising that Australian art featured prominently; 15-20% of Australian galleries at the fair contained indigenous works. Attention from prospective buyers was no doubt stoked by a recent sale of Aboriginal art at Sotheby's, which netted AUD$660,000 (about US$500,000) for a work by the late Rover Thomas. This represented the second-highest price ever paid for a painting by an Aboriginal artist. Despite this milestone, the Melbourne Art Fair consciously emphasises works by living artists, and this year's fair was no different.

Gallery directors participating at the fair applied different strategies to lure viewers. Some preferred to concentrate on a single artist, while others offered works from multiple artists on similar or varied themes and media. If the little red dots were any guide, the former approach was more effective; among others, it was taken by Art House Gallery (exhibiting artist Joshua Yeldham), Jan Murphy Gallery (displaying works by Ben Quilty), Kaliman Gallery (showcasing artist Tim McMonagle) and Sullivan + Strumpf Fine Art (exhibiting works by Alasdair Macintyre).

The organisers intend the fair to be far-ranging and eclectic, with works that reflect a range of environmental, social and political issues. Fiona Hall's 'Leaf Litter' series and Michael Parekowhai's 'Cosmo' address the issue of colonisation using images of plants and animals; Marian Drew's large photos of Australian roadkills of native fauna show the destructive effects of modernity on natural habitats; Kate Beynon's paintings confront racism, dislocation and migratory paths with images that are, in part, self-portraits; and Glen Clarke's painstakingly created installations, including thousands of folded Vietnamese and American paper currency hanging from grids of red wires, remind viewers of the impact caused by explosive ordinance used in the Vietnam War.

For some artists, strong visual effects seemed to eclipse attempts to create physical meaning. Ben Quilty's paintings shock viewers with his seemingly violent application of thick paint onto canvas; Pat Brassington's photography presents the perverse under a quite delicate and peaceful veneer; Peter Churcher applies a near-Classical treatment to contemporary themes, prompting a double-take by viewers as they consider which carries greater weight.

Despite the predominance of commercial galleries, the fair also included non-profit exhibiting organisations. With the claim of approximately 65% of event sales returning to living artists, fair organisers achieved one of the venue's goals: promoting the visual arts as a living entity that enhances the livelihood and profile of contemporary visual artists.

Christopher Hodges, chairman of the Melbourne Art Fair Foundation, stressed the importance of having international galleries in the MAF, especially galleries from Australia's Asian neighbours. Twenty-five galleries were included in the international part of the MAF, including seven from China. Hodges told Arts Hub that he believes the presence of these overseas galleries helped to create a dialogue, which not only 'opens up new ground for artists to explore, as well as to introduce us to the art of our Asia Pacific region. This dialogue means that people here get to know people [from] there, and in the end it is a meaningful exchange for artists'.

Brian Wallace, director of the Red Gate Gallery in Beijing, proudly marked his gallery's fourth attendance at the Melbourne Art Fair, displaying emerging and established Chinese artists. Wallace noted the rising interest in Australia for contemporary Chinese art. Heidi Chang from PYO Gallery of Korea echoed Wallace's sentiment; many of the 26,000 visitors, she said, stopped to admire works of Korean artists, including those by Sung-Tae Park and Yong-Dee Lee. But galleries did not restrict their displays to works solely by homegrown artists. Korea's Park Ryu Sook Gallery, for instance, highlighted the trapezia frescoes of London-based artist Patrick Hughes.

If MAF provided a market for collectors, it also created opportunities for artists to broaden their own views. Melbourne-based artist Julie-anne Armstrong-Roper commented that, 'Usually artists tend to lock themselves up in their studio to work on their pieces. Events such as MAF force us to come out of own shells, and to see what other artists are doing'.

Armstrong-Roper said she found the works from overseas and interstate especially interesting. Their inclusion at the fair exposed local artists to creations they may not have had access to otherwise. So while the Melbourne Art Fair showcased current trends in contemporary Australian art, the cross currents of an exciting cultural exchange were apparent and, most likely, will influence indigenous art in the future. 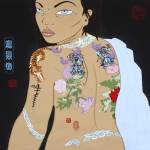