Maurizio Cattelan: Where to now?

Maurizio Cattelan: Where to now?

After the commotion of the heist, the recently ended exhibition, Victory is not an Option, at Blenheim Palace and a new publicity stunt beg the question of where Cattelan might go next 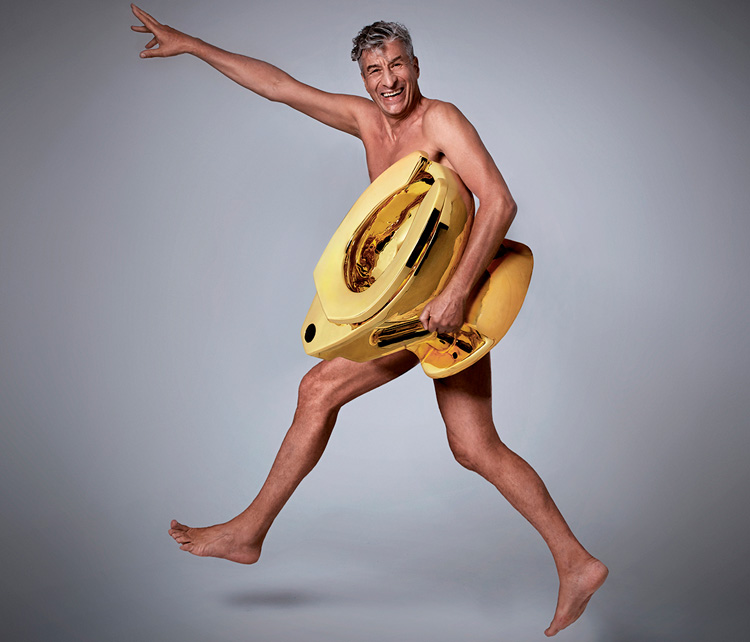 The dismantling of Maurizio Cattelan’s display at Blenheim Palace has brought no closure to the mystery of the gold toilet, a whodunnit that has sparked inevitable, if puerile, glee. Perhaps also inevitable, given his past, is the fact that Cattelan has had to rebut insinuations that he was responsible for the showy theft of the toilet, named America. One of his historic kleptomaniac exploits consisted of breaking into an Amsterdam gallery to steal a sculptural exhibition (as well as all the office paraphernalia) and then display it in another gallery as if his own.

Other gestures were slightly more socially acceptable acts of appropriation – replicating a friend’s show in an adjacent gallery, and the more cerebral lifting of Marina Abramović’s title The Artist is Present for an exhibition considering the notion of copies. Nor is America the first of Cattelan’s works to have been stolen – an early effigy of a homeless man was taken from the University of Wisconsin’s Institute of Fine Arts after eliciting protest.

Further arrests have been made in connection with the America sting, though its recovery seems unlikely, even with the offer of a £100,000 reward. Security around this flamboyant emblem of filthy lucre seems to have been cavalier, bringing to mind the Marquis de Sade’s fable of “a people who punished not the thief but him who allowed himself to be robbed, in order to teach him to care for his property”. Whether or not the theft was staged hardly seems to matter; such acts now seem watered down to the point of banality and the suspicion that Cattelan might have been the culprit almost predictable in a career increasingly hijacked by his exhaustingly zany performances.

The absence of America was no prodigious loss to the exhibition, being one of his dullest, crassest works, the kind that risks turning one of the great artists of the 21st century into an expensive fashion label (in the bleak cinematic portrait of the contemporary art world, The Price of Everything, Barbara Rose called America “an insult”, presumably not for puritanical reasons, but for the way it relegated Cattelan to the category of luxury brand).

Many stellar works were present at Blenheim, ones possessed of the quality common to many classics: the sense that they’re  inevitable and have always existed, while yet still being thrilling. Cattelan is often – puzzlingly – described as Duchampian, but his menagerie of human and animal figures (and he is at his best with these) has nothing of the visual and affective void of so-called conceptual art, being more suggestive of the sacred-profane potency of Caravaggio. To see these portraits is also to be reminded of the prodigious, craftsman-like specificity of his faces, sometimes resulting in scrupulous mimicry (the pope, Hitler, the tragic pendent horse), and, with the self-portraits, in a disquieting, almost-but-not-quite, now-you-see-me-now-you-don’t likeness.

This wasn’t the first time Cattelan had displayed his strange and wonderful tableaux vivants in historic venues, including Turin’s Castello di Rivoli and the Monnaie de Paris, a site that saw his reappearance after a “retirement” exhibition at the Guggenheim, a tour de force that was more distinct artwork than conventional retrospective. At Blenheim, there was thus a slight air of déjà  vu in the setting of some works, a familiarity heightened by a few recycled descriptions – in contrast with the Monnaie’s curatorial flair that stretched to commissioning texts for each piece from a pool of authors including artists, a rabbi, a monk and a priest (aptly, given the religious current that runs through Cattelan’s work).

What set this exhibition apart was its spectatorship: most visitors don’t go to Blenheim to see Cattelan and many don’t want to see him once they’re there – hence the palace’s nervous warnings about the exhibition’s “sensitive” and “challenging” material. Such cautions are understandable given that some responses from Blenheim’s more habitual viewers are of a blatantly reactionary, Winston-would-turn-in-his-grave stamp. For audiences favouring a feelgood, heritage-as-theme-park experience that accommodates the right kind of taxidermy and an acceptably aestheticised or infantilised portrayal of war (vide the palace’s copious armies of toy soldiers), no matter that Blenheim’s interiors are not quite out of the top drawer.

The first Duchess, who directed construction and design, had an exacting relationship with her purse strings and used cheaper, imitation materials with a veneer of opulence – the connoisseur Horace Walpole described it as “the palace of an auctioneer who has been chosen King of Poland, and furnished his apartments with obsolete trophies, rubbish that nobody bid for, and a dozen pictures that he had stolen from the inventories of different families”. Later, financial decline, fire, bouts of philistinism and frenzied redecoration triggered by a marriage to a Dollar Princess contributed to the loss of virtually all first-rate artworks and to the pastiche-like quality of Blenheim, with its would-be Versailles and Bernini schemes.

In that respect, Cattelan’s miniaturised repro Sistine chapel was effective – the work, incidentally, shown in his 2018 exhibition on the art of copying. Of the few novel works, a vast, disembodied blow-up of Joan of Arc’s flag-brandishing arm derived from Frémiet’s equestrian statue in Paris was perhaps the most successful, while having the curious quality – for Cattelan – of somehow blending harmoniously into its surroundings.

The same cannot be said for what could simplistically be called the signature pieces – La Nona Ora, Novecento, Him, We – works that blast everything else off the walls, apparitions of intense and sometimes unbearable pathos and intimacy, whether placed in a white cube or a baroque(ish) stately home. Now that the cruciform walkway of grubby union jacks has been removed from Blenheim, it remains to be seen what Cattelan’s next incarnation will be and whether he will veer away from the slippery slope of his clown shtick.

Him, 2001, Victory is Not an Option, Maurizio Cattelan at Blenheim Palace, 2019. Photo: Angeria Rigamonti di Cutò.

Of course, shafts of black humour are integral to his universe. Who else would conjure up a squirrel suicide, who else would ask his sister, when in the midst of a depression, whether she had ever considered killing herself, a question at once dreadful and hilarious, and it is hysteria’s knife edge between comedy and anguish that feel like his true breeding ground (his clearly affectionate sister reported being freed from her suicidal ideation partly thanks to the squirrel).

Cattelan is notably averse to real interviews and non-jokey appearances, speaking publicly for the first time only last year when awarded an honorary professorship in sculpture at Carrara’s Academy of Fine Arts (a previous honour conferred on him was a sociology degree). This was an impeccably courteous, modest, emotive but also panic-stricken Cattelan, and within his usual court jester persona, this felt like the real subversion. He can be an absorbing narrator, his rare openings dense with rich childhood material including a spartan upbringing in a Padua permeated by Catholicism, being courted by left-wing terrorists (his mother repeatedly accusing him of being “a whore and a member of the Red Brigades”), an intense fascination with the mechanics of TV and radio antennae and an obsession with gaining financial independence that led to a long stint working in a hospital – including its morgue. That hard-earned job security meant a great deal, to the extent that even after Cattelan had exhibited at the Venice Biennale, his concerned father pleaded: “Maybe the hospital will take you back?” In the most recent of his more sober interventions, an interview with Italian Vanity Fair, Cattelan announced that he is thinking of opening an orphanage. 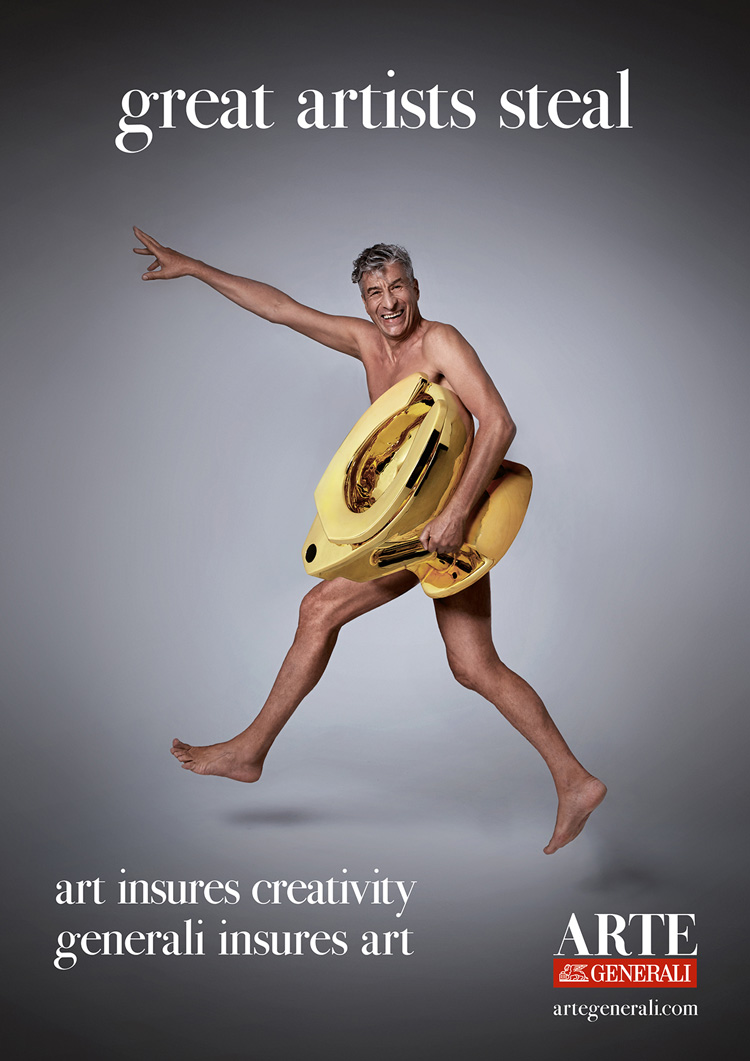 But for now, he is doing anything but keeping a post-heist low profile. In collaboration with fellow agent provocateur Oliviero Toscani, as of last week Cattelan is the impish face of the advertising campaign of the new art insurance arm of Italy’s Generali company, an enterprise offering “a suite of prevention, protection and insurance solutions for art collectors”. As an unsubtle reminder of what kind of protection an art collector might need these days, the poster gleefully depicts a naked, running Cattelan with America tucked under his arm, under the caption “great artists steal”. A giant version is to be projected on to Generali’s Zaha Hadid-designed skyscraper in Milan in 2020. 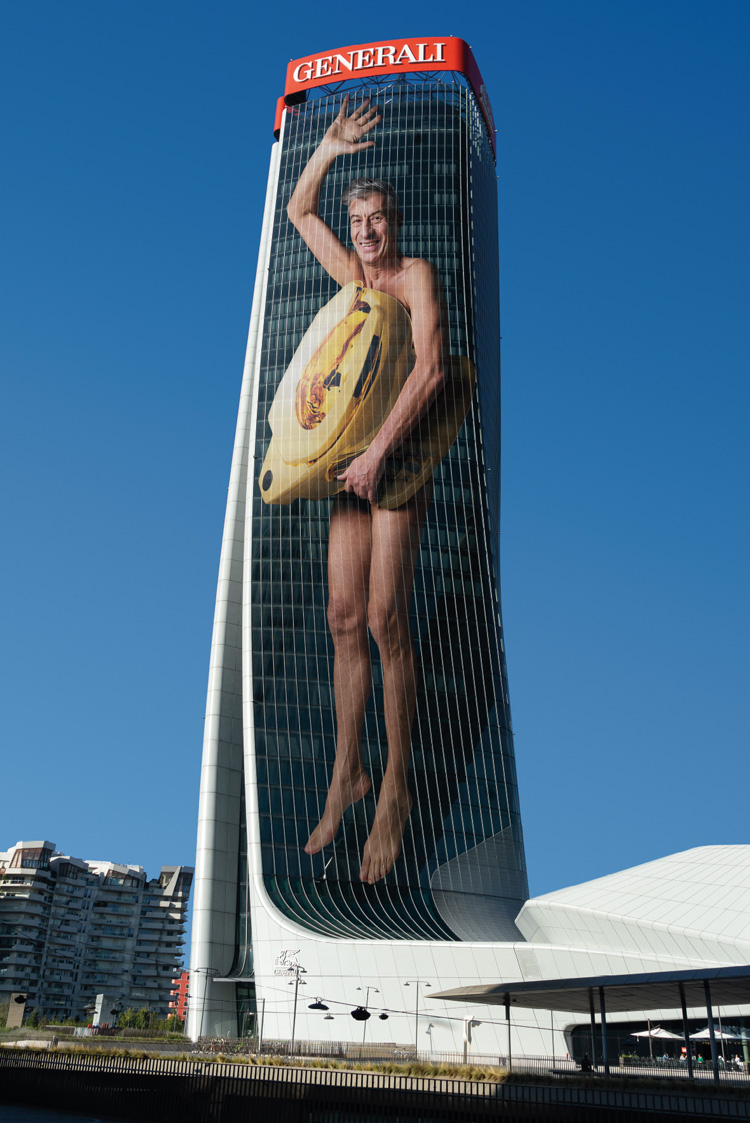 Rendering image of the Generali Tower. Project expected to be installed by the first-half of 2020. Oliviero Toscani Studio. 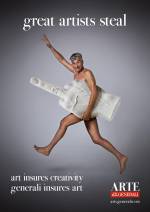