From slapstick to sarcasm, parody to political activism, this group show at the South London Gallery, curated by Ryan Gander and gallery director Margot Heller, interrogates contemporary artists’ diverse manipulations of humour as a compelling facet of human connection

“The best art provokes you without you even realising you’re being provoked,” Ryan Gander told Alexander Glover in a Studio International interview in 2015. The best humour, arguably, also comes at you sideways - the element of surprise being the surest way to trigger the laugh reflex or tickle the collective funny bone. Humour is an almost impossible thing to anatomise, but Gander (b1976), together with South London Gallery (SLG) director Margot Heller, have done their best to range over its tricky but rewarding terrain in this group show, Knock, Knock. Featuring work from 36 artists, it sprawls throughout the SLG’s campus, now doubled in size thanks to the addition of a restored Victorian fire station across the road from the main gallery, in Peckham. 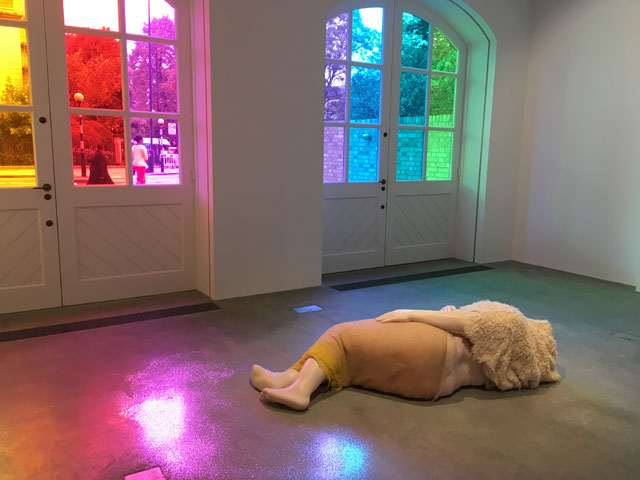 The Fire Station annexe is a magnificent augmenting of the SLG’s facilities: built in 1867, this was the earliest surviving purpose-built fire station in London and firemen and their families were expected to live here, along with the horses that pulled the engines. This civic but domestic space - not just restored but amplified, thanks to the care and craftsmanship of architects 6a - delivers just the right kind of intimacy and pacing for such a diverse array of work. It means Ugo Rondinone’s sleeping clown (If There Were Anywhere But Desert, Friday, 2002) can occupy his own surreal roomscape, giving the curators total control over the way visitors experience the work: from the doorway, we notice the pretty hues cast from strategically tinted windows as they bathe the supine form in rainbow light (approached from behind, the figure’s voluptuous curving bottom implies it is female). Skirting the pool of glitter at the figure’s feet, we arrive in front of it to find a semi-naked, beer-bellied man, his face slicked in red clown makeup; it is simultaneously surreal, seductive and creepy. It is not one of those laugh-out-loud moments, although the show does have them.

There is, for example, much sniggering in the small crowd that gathers around Lucy Gunning’s video The Horse Impressionists (1994), when one of her participants gamely paws the ground and canters. But as the film switches to seemingly normal, randomly selected women attempting to whinny and snort like horses while going about their daily lives, the laughter falls silent. It rapidly becomes uncomfortable – much like watching Harold Offeh’s nearby video Smile (2001), which has the artist grinning and gurning for the duration of Nat King Cole’s syrupy, 1954 rendition of this bitter-sweet song (the music for which was composed by the ultimate clown, Charlie Chaplin). 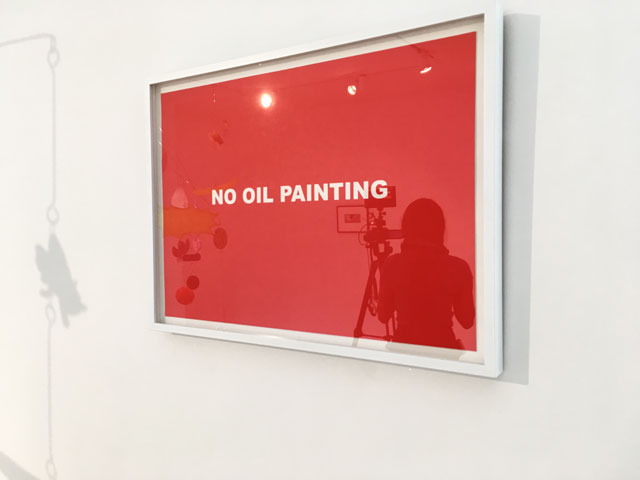 Our curators have provided a few instant-gratification gags, such as Matthew Higgs’s limited-edition print, which simply bears the words No Oil Painting (Portrait (landscape), 2006) or Lynn Hershman Leeson’s sketch of a hand, with gold lettering spelling out Hand Drawn (1964).

Ceal Floyer’s Mousehole (1994) perfectly emulates the crisp, white interior of the gallery walls (or indeed any gallery walls) on a miniature, mouse-scale, in the corner of a room in the Fire Station. But Floyer’s Saw (2015) goes one better, promising many moments of slapstick comedy in the main gallery space. Consisting of the upper blade of a saw poking through the parquet as it almost completes a circle, it triggers a hasty hopping or stepping back response from anyone who finds themselves inside that circle as the penny drops. 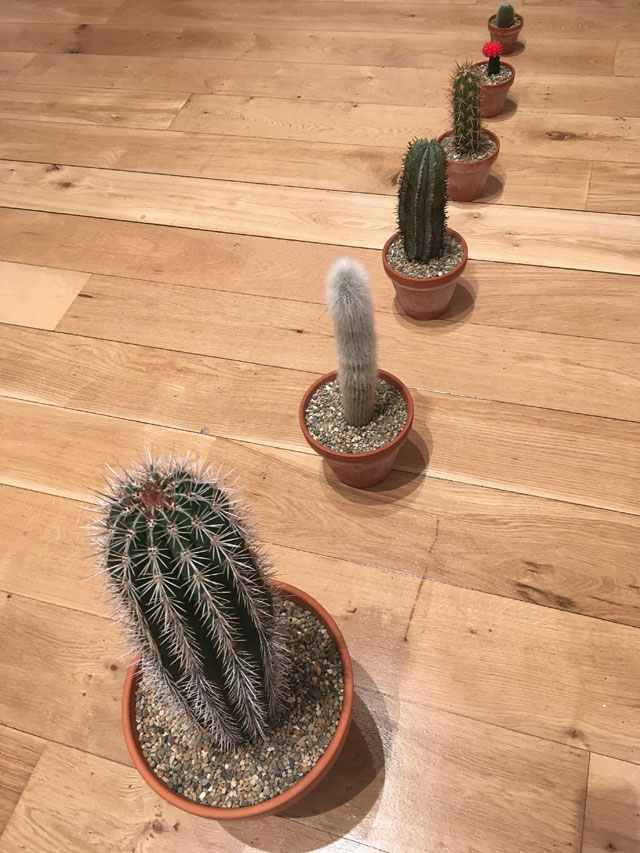 Martin Creed’s cacti, Work No 603 (2008), are also grin-worthy: fat, bristling pot-plant phalluses, arranged on the floor in order of tumescence (or detumescence). Tom Friedman’s silver-foil guitarist hits the spot – a nerdish recreation in kitchen foil of a rock guitarist, lampooning the stereotypical hip-thrusting guitar-hero stance, while simultaneously evoking the sheer joy of making (and listening to) music – very loud music.

The title for the show is taken from Roy Lichtenstein’s Knock, Knock Poster (1976), which appears in the main gallery. Lichtenstein made this drawing in the same year that his art changed from abstract painting to scaled-up parodies of comic-strip tropes, in the process highlighting how inadequate their simplistic, graphic presentations of violence, sex and romance are in representing the far more complex, human realities. 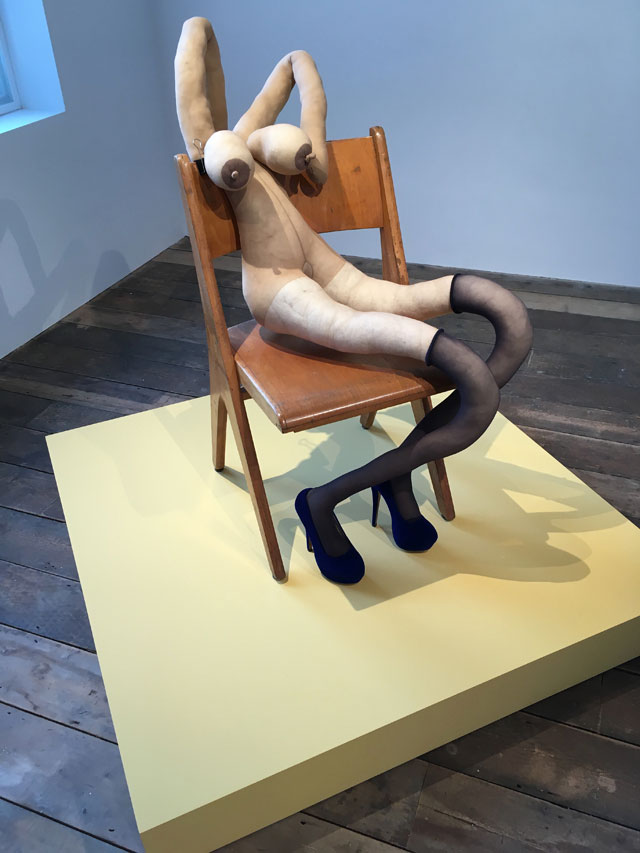 Political humour is laced throughout the show. Sarah Lucas has revived her “bunny” series, started in the 90s (using stuffed tights to emulate seductive female poses), with a new work: Yves (2018), a reference to Yves Klein, who famously choreographed performances of naked women smeared in paint to create his Anthropometry paintings. The colour he “invented”, International Klein Blue, is also the colour of the shoes Lucas places on this headless temptress’s feet: humour as a weapon of resistance.

The slow-build gags are often the ones we relish most. And the art equivalent of the shaggy-dog story appears here, for example, in Jill McKnight’s This Work is Neverending (2018), a deadpan, but painstaking description of the minutiae of making and delivering an exhibition of her work. Even more treasurable are Pilvi Takala’s film Real Snow White (2009), where the artist, dressed as Snow White, is refused entry to Disneyland, and Eleanor Antin’s 100 Boots (1971-3), in which the gentle observational humour accumulates with repetition. Antin’s best-known conceptual work, it involved an epic journey for a troupe of 100 wellington boots, travelling from coastal California to New York City. In a selection of the 51 postcards she ended up making for this work, we see the boots arranged in classic road-trip vignettes (at the farm, on the rollercoaster, filing along a country path, on the beach). 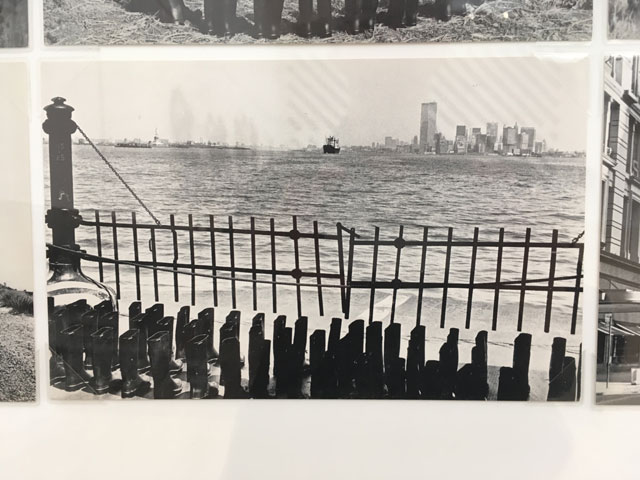 Physical contexts – in the form of juxtapositions – also amplify humour: for example, Gander’s pair of animatronic eyes (Dominae Illud Opus Populare, 2016) are positioned next to Rodney Graham’s Newspaper Man (2017), who spies on us through eyeholes snipped in his newspaper. 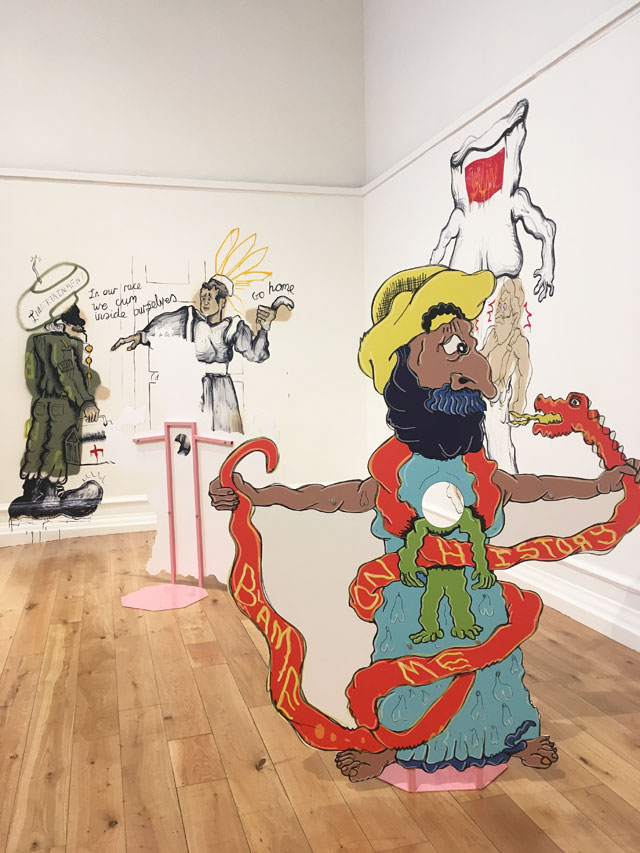 The sarcastic humour of Christian Jankowski’s neon I Love the Art (from the series Visitors, 2014, inspired by comments in a gallery visitors’ book) appears all the more droll for its proximity to two dozen of Maurizio Cattelan’s stuffed pigeons, perched in lifelike postures along a shelf by the ceiling of the SLG’s main gallery. First shown in an earlier version at the 1997 Venice Biennale, Others (this version is from 2011) was a pigeon parody of snarky local attitudes towards tourists in Venice. Here, it echoes feelings in London towards pigeons as well as the current rightwing rhetoric around “unwelcome” UK visitors in general. The proximity of Cattelan’s stuffed pigeons to Hardeep Pandhal’s Konfessions of a Klabautermann (2017) makes Pandhal’s exploration of cultural identity through cut-out figures all the more unsettling. And their co-location with Joyce Pensato’s frenzied drawings of military Donald Ducks chasing after Mickey Mouses weaves a distinctly topical note of intolerance and menace into this whole grouping. 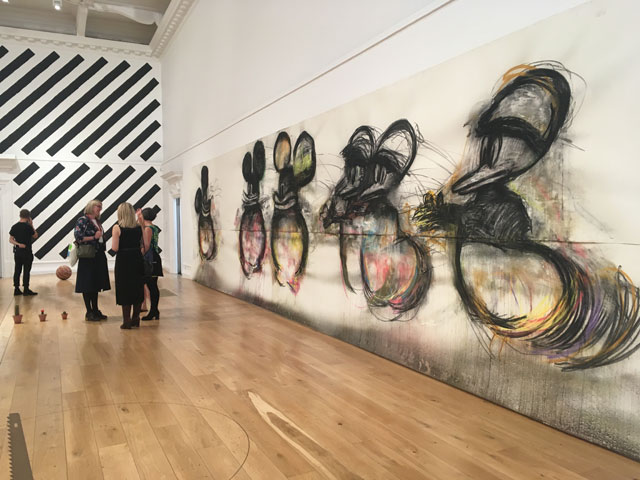 There is often cruelty in humour – usually at the expense of others. But for this show, the last laugh appears to be a self-parodying racist gag by the ultimate Welsh prankster, Bedwyr Williams: a bicycle clad in sheepskin, wearing horns and titled: Fucking Inbred Welsh Sheepshagger (2018). 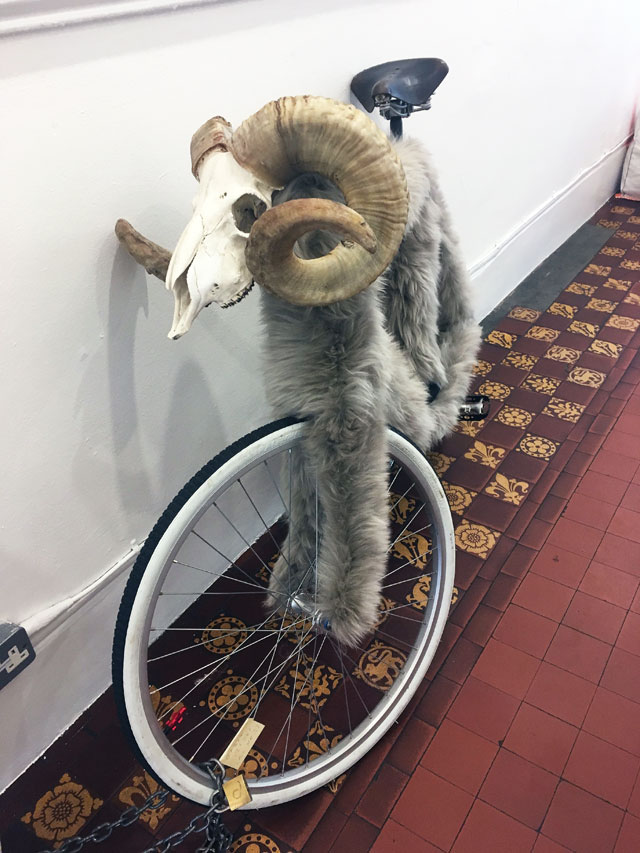 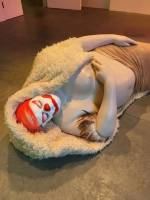 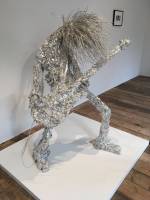 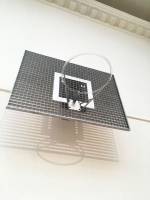