A Barrel of Laughs, A Vale of Tears

A Barrel of Laughs, A Vale of Tears

'Artists can colour the sky red because they know it's blue. Those of us who aren't artists must colour things the way they really are or people might think we're stupid.' Jules Feiffer

Despite his disclaimer, Jules Feiffer certainly must be counted among those called 'artist'. But his talent for colouring things 'the way they really are' by spotlighting human foibles and life's absurdities is undeniable. 'Jules Feiffer: If You Really Loved Me, You'd Find Me: The Strips 1960-2000', a recent exhibit at the Adam Baumgold Gallery on Manhattan's upper East Side, marked the first time Feiffer's cartoons were exhibited in a New York gallery. The cartoons represent an important genre for this versatile artist, who won a Pulitzer Prize in 1986 for his editorial cartoons, an Oscar in 1961 for a short animated film ('Munro'), and was nominated for a Tony Award for his play 'Knock Knock'. The author/illustrator's witty take on life has also been expressed in novels and beloved picture books for children. In addition to the exhibit, this summer, Feiffer's 'Knock Knock' was put on at The Vineyard Playhouse in Martha's Vineyard, Massachusetts, which first staged the play in 1982 during its premier season. Those who attend the current production will see Feiffer's daughter Hally in the cast.

Feiffer was born in the Bronx in 1929, a pivotal year for the USA. Fittingly it seems, the beginning of the Great Depression, a fracture that skewered the lives, hopes and perceptions of every American, coincided with the birth of an artist whose unique spin on American life, politics and childhood escapades has made indelible impressions on his audience. Feiffer himself defies classification; his works are in fact containers for his free-ranging imagination. The strips reveal a profound understanding of human nature and expose nearly every national neurosis plaguing his native country.

Feiffer's first major break as a cartoonist came in 1956, when the Village Voice began offering Feiffer, a weekly series featuring the artist's political cartoons, to its readers. One could argue, though, that working as an assistant to master comic artist Will Eisner, while still a student at Pratt Institute and the Art Students League in New York, was his biggest break of all. When Eisner returned from service during World War II, he took on a number of assistants; but Feiffer was the one who worked closely with him on his most famous strip, 'The Spirit,' created in 1940. Since then, Feiffer's work has been published in many national magazines, including The Nation, Playboy and Esquire. He is also a frequent contributor to The New York Times and The New Yorker.

The 48 works shown in the exhibit focus on American politics (embarrassingly absurd); families and romantic relationships (endearing and maddening); and the struggle for power and authority (inescapable and numbing). No doubt, those who have followed Feiffer's career as an editorial cartoonist are quite familiar with his relentless attack on political follies. Richard Nixon and, later, Ronald Reagan were favourite targets. These presidents provided ample material for Feiffer's barbed wit. 'Dick-N-Pat-Outlaw Football' (1970), 'Now We Come to the Media' (1973) and 'Would You Buy a Used Country From This Man?' (1973) could serve as iconic images of an era. These images, like the Reagan-inspired 'The United Disney of America' (1984), are both funny and sad for they are caricatures of caricatures, one perceptive commentator's expression of a truth.

When he turned his mind - and pen - to romantic relationships, Feiffer portrayed the complex and confusing rollercoaster ride of expectation and desire with a few broad strokes: self-absorption ('Me. Me. Me. Me ...' ,1972), insecurity ('I Have No Friends', 1972), and the unfathomable laws of attraction ('You Really Turn Me On', 1972).

Feiffer excels with family dynamics, particularly with his astute awareness of children's intelligence. In 'I Never Want to Grow Up' (1974), he showed how a young boy has observed the adult world and come to an important conclusion. And in 'Blame the Maid' (1976), he demonstrated the inability of a parent to accept responsibility for his mistakes.

In 'Someday I Will Inherit My Power' (1975), 'Downward Mobility' (1991) and 'Unless We Blow You Up First' (1977), Feiffer dealt with power, money and personal freedom. Leavened with Feiffer's signature humour, these images render contemporary life a stage for laughter and tears, a comedy of errors and a school for hard-won wisdom.

Those familiar with Feiffer's cartoons will easily identify the artist in his books for children. After illustrating Norton Juster's classic The Phantom Tollbooth (1961), Feiffer went on to a successful career as a children's book author. He has said that he never intended to illustrate children's books. Feiffer lived in the same apartment building in Brooklyn as Juster, and that proximity led to what, in hindsight, seems the perfect match. Feiffer's novels and picture books appeal to children and adults. In these titles, Feiffer exhibits some rare qualities: the ability to entertain all ages and to capture the essence of childhood with all its fun and frustrations.

His first children's book as author and illustrator was The Man in the Ceiling (1993). As a boy, Feiffer loved to draw; his favourite comics included Flash Gordon and Popeye. The boy in The Man in the Ceiling also wants to draw comics. Determined to become an artist, he must overcome his own doubts and those who do not share his vision. In The Daddy Mountain, a resourceful girl creates her own adventure by imagining her father as a mountain, then facing all of the obstacles she finds to climbing him. In I Lost My Bear, the main character is irresistible as the quintessential child: crushed by the loss of her favourite toy; manipulative as she tries to enlist the help - and get attention from - family members; and oblivious to the reason for the predicament: a messy room. Her happiness at being reunited with the toy will bring smiles to readers' faces as they, like she, experience great relief with the end of this childhood trauma. In the novel A Barrel of Laughs, A Vale of Tears, Feiffer turned the classic quest story on its head, showing that some quests end in unexpected directions, and that our expectations often prevent us from seeing where we need to go.

In interviews, Feiffer has commented on the inspiration for many of his books, his family. In 2005, after a decade, he returned to the novel format for his children's book A Room with a Zoo, another story drawn from his own life. Here, a nine-year-old girl cannot convince her parents to agree to a pet dog; not until, they say, she is old enough to walk the dog on the city's streets. Still, she manages to wrangle a menagerie of other creatures into their upper West Side Manhattan apartment. Told from the girl's point of view, the story - and the steady stream of animals into the apartment - will have readers laughing out loud.

Although small, the selection of Feiffer's cartoons at the Adam Baumgold Gallery no doubt brought smiles to the faces of all who visited. Perhaps they left in search of a copy of The Phantom Tollbooth or some other example of Feiffer's genius. The sheer volume, variety and quality of Feiffer's output is astounding; it includes screenplays for Carnal Knowledge (1971), starring Jack Nicholson and directed by Mike Nichols, and Robin Williams's Popeye (1980). With an irony that Feiffer may well appreciate, his name is not nearly as well known as the works and characters he created. His contributions have been recognised by the Library of Congress in a 1991 retrospective and the Smithsonian Resident Association Program, which gave him the 2006 Benjamin Franklin Creativity Laureate Award.

While it may be impossible to know where Feiffer's next quest will lead him, fans can look forward to his illustrations in The Long Chalkboard and Other Stories, a collection of stories for adults written by Feiffer's wife, Jennifer Allen, to be released in October by Pantheon. Until then, there are numerous volumes in which Feiffer's cartoons appear, to be savored time and again. 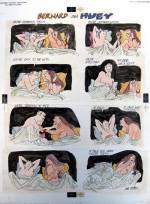 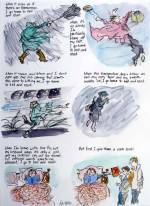 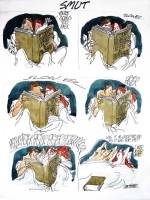 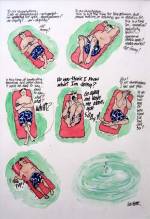 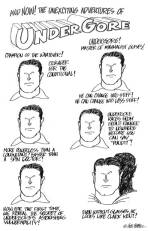