The Baroque splendour of Blenheim Palace meets its match in Cecily Brown’s furious, kaleidoscopic vision of a nation in decline 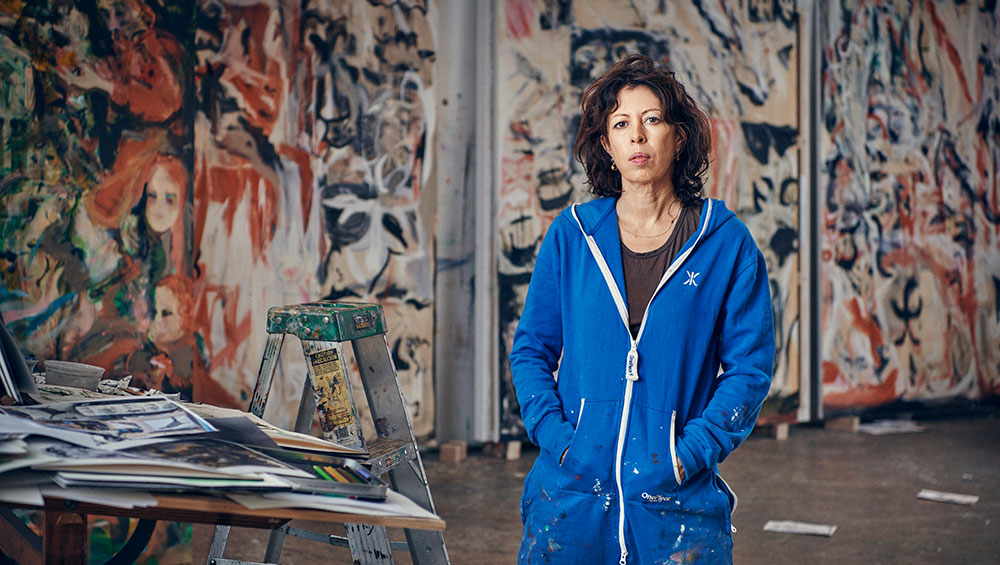 Early in her career, the British-born, Brooklyn-based artist Cecily Brown (b1969) painted bunnies engaged in orgies, psychedelic collisions of mammalian flesh. Now, in a series of new works commissioned for Blenheim Palace, furry animals are back for a rather different type of collision. In Spot the Spaniel (2019, as are all works on show), they congeal in a furious pink cloud of motion. Dog Is Life (named for a song by the Fall) terminates in the broken head of a fallen stag, while The Calls of the Hunting Horn has hounds and hunters churned into a psychedelic stew. It is an awesome piece of painting, a bravura display of Brown’s virtuosity. But amid the tantalising colours lurks an unpardonable cruelty, a shameful assault on life. 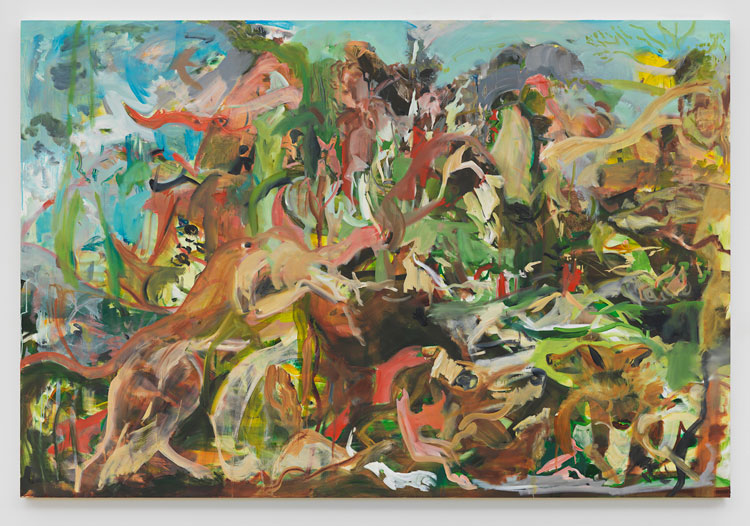 Operating in the slippery overlap between abstraction and figurative, Brown weds the expressive force of action painting to the dramatic animation of baroque; it is as if Peter Paul Rubens and Willem de Kooning are taking turns to work on the same canvas. Hunting is a formidable subject for Brown, not least because the hound’s pursuit of its fleeing prey resembles the painter’s attempt to catch a fleeting moment of motion. It also provides numerous challenges: to capture action, animal anatomy, the sheen of light on rushing fur, the tumult of fast-moving actors in a landscape. A master of paint that appears charged with motion even as it sits fixed on the canvas, Brown crosses these hurdles with aplomb. 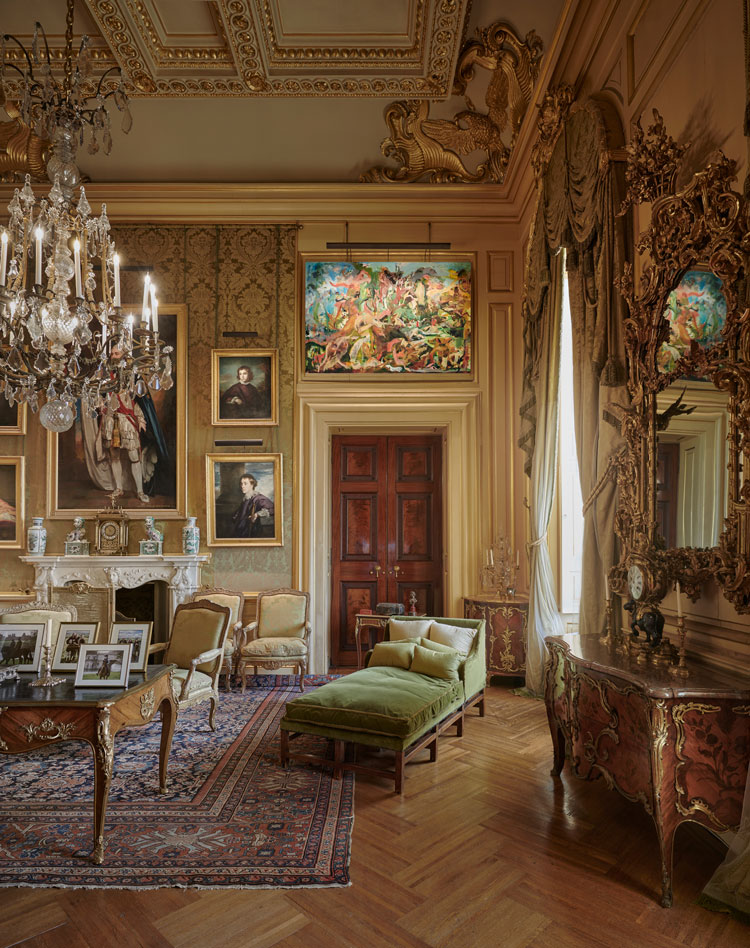 Violence is carved into the stones of Blenheim, Britain’s most imposing baroque residence. Erected on a former hunting estate to celebrate the martial prowess of John Churchill, Duke of Marlborough – 1704’s Battle of Blenheim was his great victory – it is festooned with military paraphernalia, from fearsome cannons to tiny toy armies. The state rooms are hung with a splendid sequence of tapestries trumpeting Britain’s ascendant role in European politics. Brown responds to these with frenetic battle paintings, where one can pick out red-clad soldiers amid eddies of paint.

Brown is the seventh contemporary artist to be exhibited at the Palace, but the first to have produced a sequence of specific works for the occasion. They have been integrated within the palace’s architecture, with varying degrees of subtly. Some stand diagonally on side tables, like family photos, while others hide within cabinets of china. One piece is a textile carpet – another first for Brown – that lies snugly in place of an antique rug. “I want visitors,” said Brown in an interview conducted for the exhibition, “to do a double-take, to think for the a second that my work belongs there, but then to see that it’s a slightly distorted vision of the world depicted around them.” 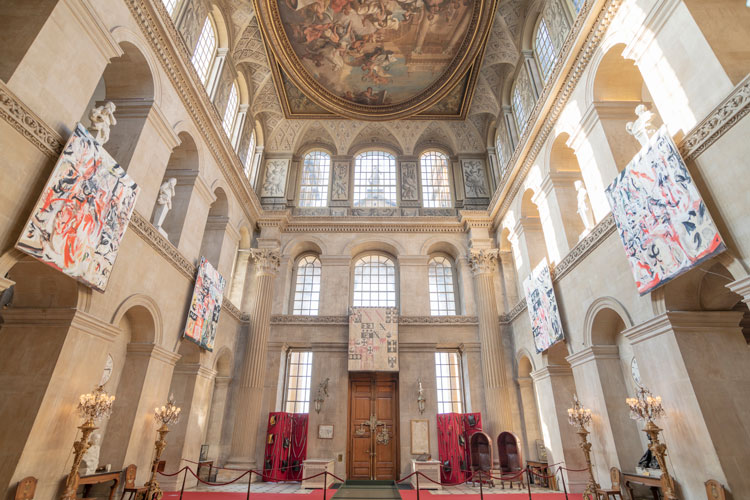 This distorting begins in the Great Hall, the architect John Vanbrugh’s supreme piece of theatre. The Duke’s standard hangs above the entrance door, and at equal height around the chamber Brown has placed her four Armorial Memorials. These each take the standard’s stiff lattice of heraldic symbols and set it free. Symbols of aristocratic might, such as the Habsburg eagle, melt away. A ship, long associated with ecclesial power, comes unmoored. Such sport with the pieties of the old elite is more than a little punkish. But Brown is less assailant than revelator, revealing power’s Ozymandian decay.

The aura of diminishment evokes contemporary Britain, a country terminally soused on a selective reading of its own past. Brown, as a British artist who has lived in New York for 25 years, is well-suited to diagnose her native country’s cult of nostalgia. Shepherd’s Delight, a mellifluous floral landscape, harks back to better times, whether the half-remembered Surrey Hills of Brown’s childhood or the mythical Golden Age of pastoral. The Forest Festivals, on one level a tribute to Victorian outsider artist Richard Dadd’s The Fairy Feller’s Master-Stroke (1855-64), presents nature as lush and violent, perforated by lance-like lines. The prettiest flowers can brandish thorns. 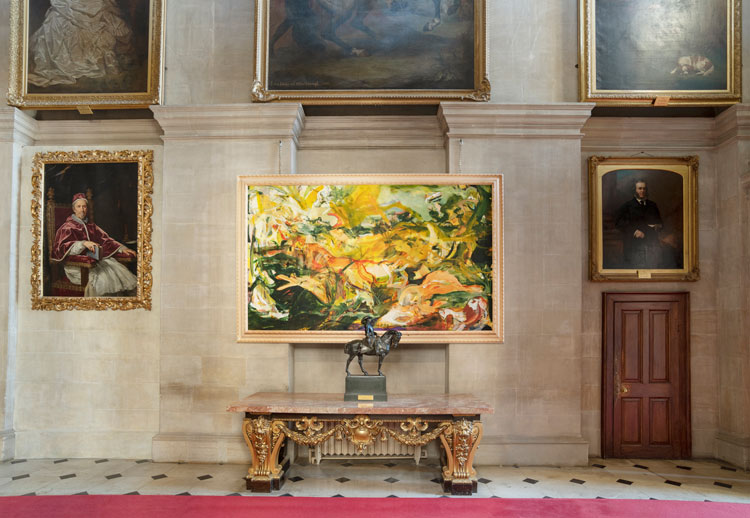 Which is not to say that there is no levity. A vitrine in the Great Hall is stuffed with the visual material that influenced the series. There are some surprises: Brown singles out the Beatles’ Yellow Submarine animation, the battle scenes from Stanley Kubrick’s Barry Lyndon, Thomas Rowlandson cartoons, and a modelling shot of a woman in a fox scarf. Daffy Duck appears contorted to hide between the lids of his beak; peer carefully into one of the Armorial Memento paintings in an adjacent corridor, and you might spot his visage. In another painting, Brown gives a dog the hooves of a horse, mirroring an error made in an adjacent tapestry. And throughout the whole exhibition Brown returns to the adorable Blenheim spaniel, a sub-breed bred by the Churchills. Sitting on the bottom-right of paintings and looking in, he serves as our guide and our surrogate, peering into the action, but never getting involved. 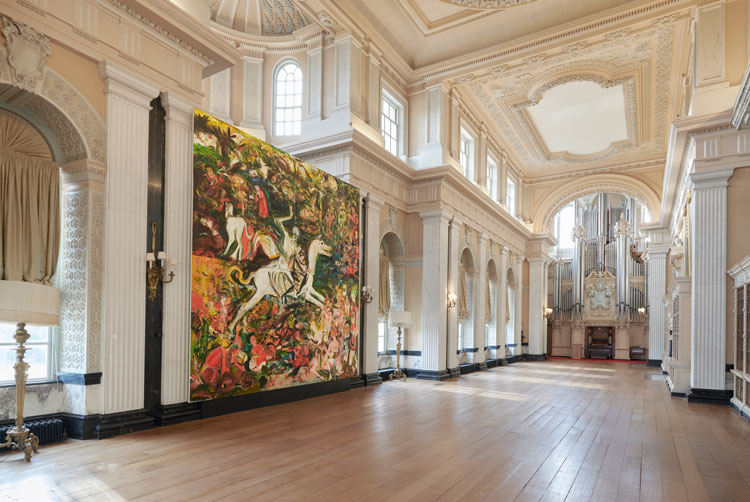 The exhibition ends with a mighty crescendo: The Triumph of Death, Brown’s largest work to date, which straddles four canvases, each of which is the maximum size that fits in her studio. Modelled on the anonymous 15th-century fresco of the same theme that now hangs in Palermo’s Palazzo Abatellis (itself divided into four parts during a move), it centres on Death himself, cheery on his dread steed. Behind him is carnage, a dance macabre that has left viscera-smeared soldiers massacred above a field of poppies. Before him, revellers clad in fox fur sip champagne, largely unaware of the ruin that awaits them. And congealed in the background sits a diminished, mouldering Blenheim. 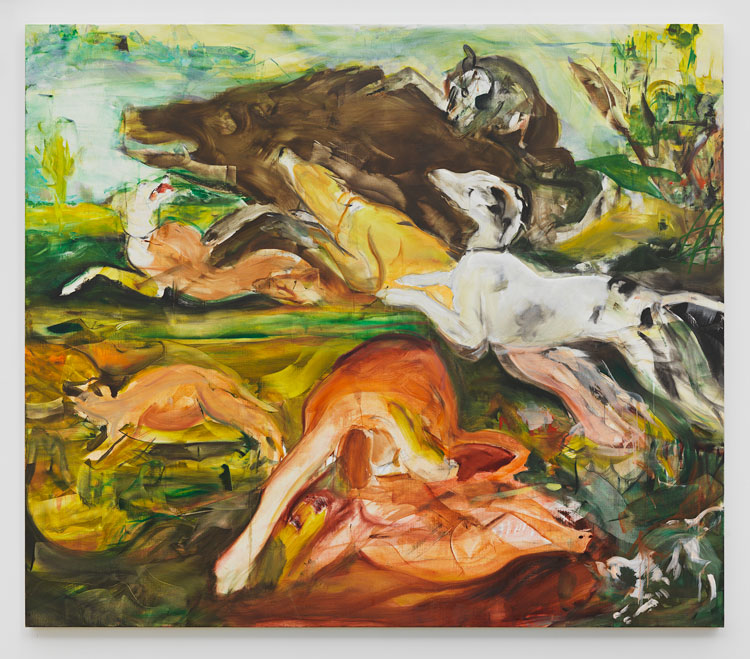 In the year of Covid-19, Brown’s Triumph seems prophetic. But it appears less concerned with the nightmares of today than the way humanity – and art – imposes order and fixity on our messy history. Two anomalous works, which sit towards the figurative pole of Brown’s practice, show this most clearly. The Children of the Fourth Duke is a cover version of the Joshua Reynolds masterwork that sits on the wall behind it. Created by painting atop a printing of the original, it makes the Georgian painter’s posed, static figures begin to loosen. The certainties of Reynolds’ day fade, as his neo-classical backdrop warps and dissolves. The other, Hunt After Frans Snyders, dissolves the Dutch master’s precise physical world into something tenuous and amorphous, as if briefly glimpsed in passing, then left to reverberate in the mind. Questioning all that is fixed, Brown is a painter for this uncertain age.