Kippenberger's restless stylistic movements resist the monumentality that a retrospective can impart, and this resistance gives the exhibition a manic energy. Rooms full of painted pastiche spill out into sculptures, books, catalogues and installations; small sketches on hotel notepaper relate obliquely to larger pieces, and internal references bind disparate works together. The curators have drawn inspiration from Kippenberger's own curatorial practices to try to produce a coherent introduction to this prolific artist, who set his life and his art on an equal footing with the claim that 'Every artist is a human being'.

Kippenberger was already upsetting the concept of artist-as-creator with the 1981 pieces that open the show, the series 'Dear Painter, Paint For Me' in which he employed a Berlin sign painter to do the painting for him, turning photos of himself out on the town or reclining on a thrown-away sofa into large, realistic canvases. 'Pale with Envy, He Stands Outside Your Door' was executed in the same year; a series of 21 paintings done in different styles and a pointed retort to the idea that a bankable signature style is a requisite for success. Yet despite this, it becomes clear - from the collected posters, books, invitations and hoarded ephemera shown in a case in the next room - that Kippenberger was very much a salesman, even describing his life as that of a travelling salesman dealing in ideas.1

Such contradictions seem to be present in all of Kippenberger's work: on the one hand, he appropriated art movements, styles and even other artists' work (such as multiples by Joseph Beuys, stuck to his own canvases based on economic graphs), and made extensive use of assistants to attenuate the traditional idea of the artist's role. Yet on the other hand, a strongly anecdotal flavour persists in his work, fostered by the use of jokes and visual or verbal references deeply embedded in private or narrowly historical moments. This turns many of his paintings into rich but confusing riddles, whose original 'answers' can only be teased out with reference to his biography (the construction of which he took a great interest in). Perhaps it is appropriate that Kippenberger's life seems to attract just as much attention as his art if, as his friend and critic, Diedrich Diederichsen, has claimed, he was indeed a 'Selbstdarsteller' - a self-performer whose notorious antics were an integral part of his oeuvre.2

The paintings carried out by Kippenberger himself, whether socialist-realist pastiche or ugly self-portraits in underpants, have an invigorating energy to them, and the humour of the sculpted manikins facing the corner ('Martin, Into the Corner, You Should Be Ashamed of Yourself') do much to win the viewer over. But a few of the pieces on show raise uncomfortable questions about power and its application. Given his oppositional stance to Beuys, who epitomised the idealism of an earlier generation of German artists, Kippenberger's painting of the artist's mother seems to be an unfair gesture of triumph. 'Unfair' is a weak adjective of disapproval, and one I use deliberately to express a certain equivocation. Though I recognise that the distinction between art and life is a blurry one, especially for Kippenberger, Beuys' art would appear to me to be fair game for appropriation just as for criticism, but his family members would not.

I have similar reservations about the last installation in the exhibition, 'Heavy Burschi' ('Heavy Guy'). Kippenberger had an assistant paint collages based on themes from his back catalogue and then, dissatisfied with the result, he destroyed all the assistant's work. Life-size photo reproductions of the assistant's paintings line the walls or are stacked against them, with the trashed paintings in a skip in the middle of the room. This makes a powerful point about employment relations and authorship, but hovers between a constructive drama and a case in which a power inequality is played out for real. By choosing to wield his power as boss or little god, Kippenberger brings the act dangerously close to one of abuse, despite the appearance of photographic technology as the deus ex machina that undoes (or perhaps makes possible?) the violence.

The exhibition's highpoint, however - the installation 'The Happy End of Franz Kafka's "Amerika"' - goes a long way to fulfilling the social promise of Kippenberger's work, his claim that he was 'Einer von Euch, unter Euch, mit Euch' (one of you, among you, with you). A collection of chairs and tables of vastly disparate provenance and design are set out on a green playing field as if to allow a mass of individual interviews to take place - a reference to the promise of universally fitting employment in Kafka's unfinished novel. With its emphasis on the importance of dialogue and its celebrations of functionalism, reclamation and imagination, this is rightly regarded as one of his major works. 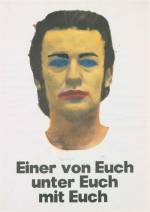 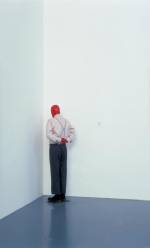