French-born artist Marguerite Humeau resurrects an eerie voice from the ancient past at Tate Britain. And she adds in some exotic fluids for good measure 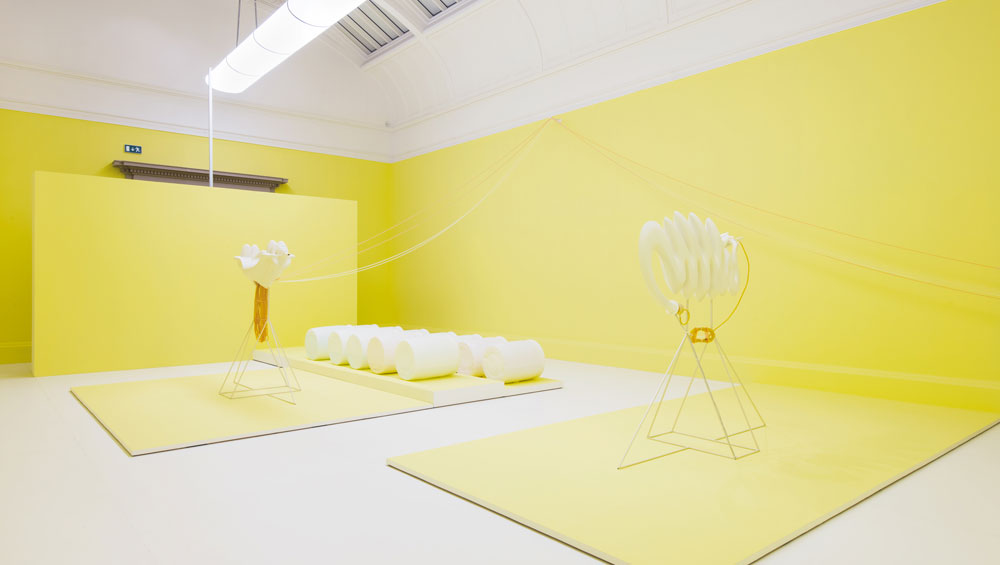 A loud, breathy, disembodied voice emanates from the room containing Marguerite Humeau’s installation. It is a hissing voice – a woman’s voice, a spirit of unknown intentions echoing from within a chamber painted in a vicious, acid yellow. In the centre of the room sits a conundrum. Two abstracted white objects are mounted on frames. One looks like a visualisation of sound waves, and seems to have a tail and a small head resembling a sentient orchid, if you can imagine such a thing. The other seems to be some symmetrical, alien organ. They are fed (or are they being milked?) by thin tubes containing a strange, orange mixture, which lead back to two opaque tanks, one holding a pale white-blue liquid, the other a deep red one.

The more you learn about the work, the stranger it gets. Familiarity with the materials only deepens the intrigue. The yellow paint on the walls has been made from the venom of black mambas, which Humeau sourced from a snake farm in Florida. The mysterious liquids wending their way through the transparent plastic tubes are hippopotamus milk and alligator blood. These substances offer a clue to the identity of the woman chanting hypnotically over the tannoy. This is the voice of Cleopatra, reconstructed synthetically by engineers in a laboratory in Cambridge, and it utters the closest approximation to the now extinct language the tragic queen would have spoken. 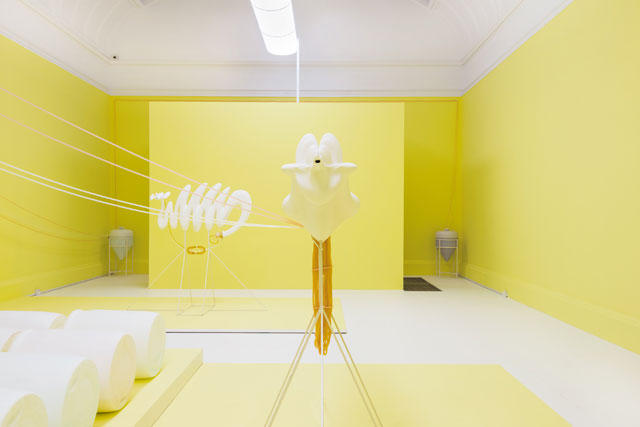 Humeau (b1986, Cholet, France) has worked with scientists before. Her graduate show at the Royal College of Art in 2011 involved the not insignificant task of reconstructing the vocal tract of a species of mammoth with the help of a collection of zoologists, palaeontologists, radiologists and biologists. She then turned her attention to a type of long-extinct “walking whale”, a precursor to modern cetaceans and a two-metre-tall prehistoric mammal called an entelodont, sometimes known as a “terminator pig”. The challenge lay in the fact that soft tissue (with a few notable exceptions) does not fossilise, so respiratory tracts and vocal chords had to be reconstructed with a healthy dose of educated guesswork. Once the structures were designed and moulded, Humeau forced compressed air through them, so that these long-dead creatures could speak again, albeit with a touch of artistic licence.

Humeau’s projects to date aim to create what the artist calls ecosystems, self-contained worlds that draw you in to her alternative realities. They are inspired by the past, real or imagined (or, often, a conflation of the two) and flirt with abstract forms designed to confuse and disorient. When talking about her work, she frequently uses the word “horrific”, which might sound a touch sensational, but there are certain facets of her work that do lend themselves to the horror genre. 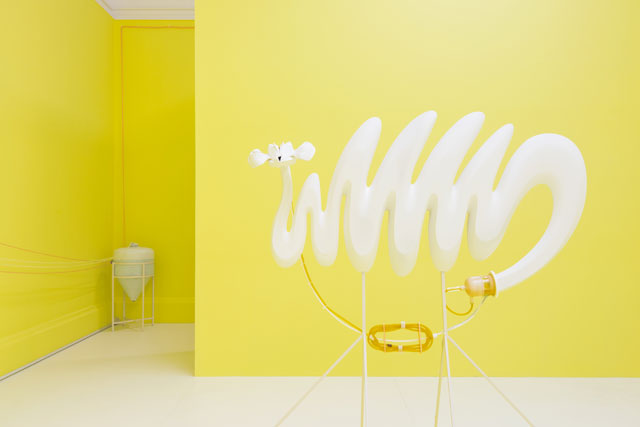 For one exhibition – entitled FOXP2 (2016) – Humeau imagines a moment when elephants develop complex language as part of an imagined future without us. With their newfound abilities, they lament the passing of the herd’s matriarch in a mournful chorus. But Homo sapiens do feature in this strange world. Humeau included vats of “liquid human”, a mixture of the elemental substances that make up the human body. As strange as it seems, her assistants sourced the constituent parts from eBay and had carpets dyed with the resulting solution. In case you are curious about the colour of liquid human, it is a not-unpleasant pink, although the name might need tweaking for the Dulux colour chart. 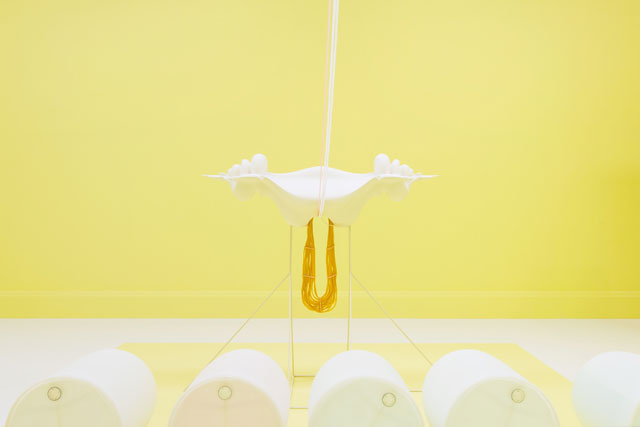 Blurring the line between life and death – an unnerving idea, to be sure – is at the core of her practice. This is where Cleopatra comes in. The ancient Egyptians are known to us largely through their funerary practices, which sought to preserve the body for the afterlife. They believed that the underworld, and the dead souls that resided there, was accessible via liminal spaces at the back of tombs. For the Ancient Egyptians, the end of life on Earth was just the beginning of something more, something eternal. The two abstract structures that form the centrepieces of Echoes represent Wadjet, a protective goddess, who was represented as a cobra, and Taweret, the goddess of childbirth and fertility, represented in statuary as an anthropomorphised hippo. Together, these two beings are producing “an elixir of life”, as Humeau calls it. But what is life? What does it mean to be living? The queen’s voice has been resurrected, but it is a soulless phantom. Cleopatra the woman can never be brought back and this is part of the underlying tragedy of the work. Fragments of the past only intensify the loss of the whole. 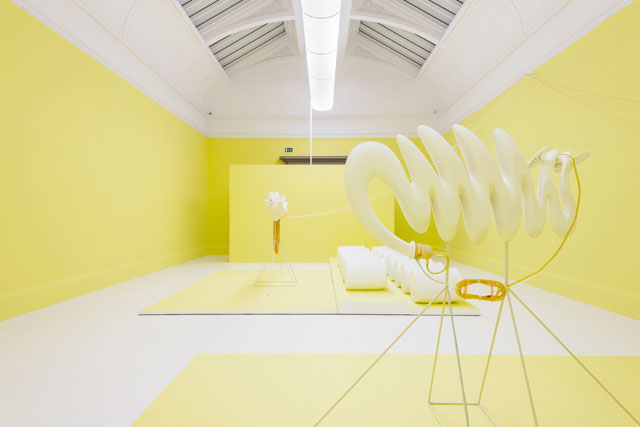 Despite the biological origins of Humeau’s installations, they always appear clinical and there is undoubtedly an esoteric slant to everything she does. Without reading an explanation, many of the gorier details would remain out of reach, and it is these almost unimaginable facts that contain the real shock factor. But the visceral experience makes seeking information too tempting and in this way Humeau draws us in to her world and fills our heads full of questions, ultimately leaving us disquieted and unsettled. She manages to combine the ancient past with an imagined future; one leaks into another as though the rules of time no longer apply. With Humeau, there are no rules. Anything is possible.

• Echoes is on display as part of Art Now, Tate Britain’s programme of exhibitions, which seeks to promote emerging talent. Past exhibitors have included Tacita Dean, Marc Quinn and Ed Atkins.