The latest edition of the roving European biennial is a sensitively selected reflection on the nature of power, at once augmented and overwhelmed by its spectacular setting 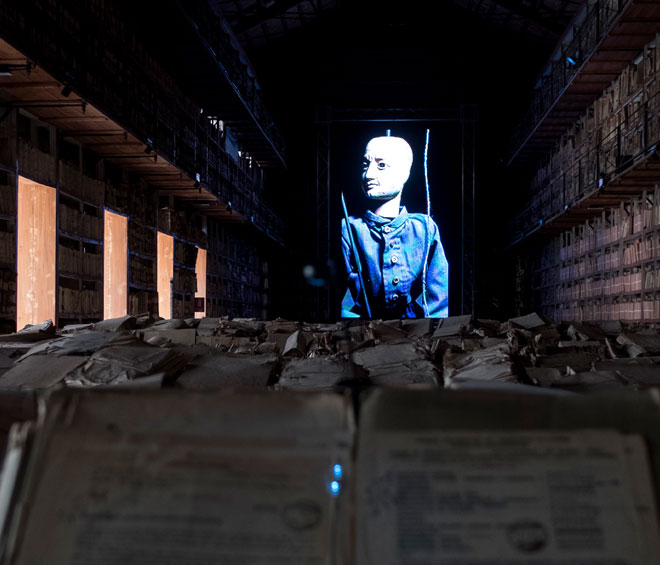 There are three screens. On the first, there is text; on the second, a map; on the third, images. The first lists every charted civilian bombing that occurred on a given day, with casualties when known, the second adds a black mark to the map, and the third shows associated imaginary. Every second, it moves forward a day, from the first aerial bombardment – of Ottoman Libya, by Italy, in 1911 – to the conflicts of the present day. Described thus, it may sound simplistic, even a little trite. But, in situ, it is horrifying. The videos currently last six hours, and will be updated as long as bombardment continues. Watching it for a span of time, you feel your own reaction shift from despair to desensitised historical interest. 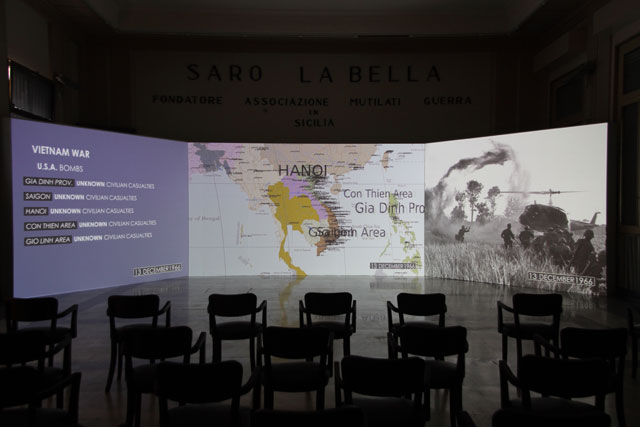 This is Spanish artist Cristina Lucas’s Unending Lightning (2015-ongoing), on display at the 12th edition of Manifesta: the nomadic European biennial of contemporary art. Themed The Planetary Garden: Cultivating Coexistence, this year’s exhibition takes place in Palermo, Italy. Organised by a four-person team of “creative meditators” – architect Ippolito Pestellini Laparelli, urbanist artist and architect Andrés Jaque, documentary filmmaker Bregtje van der Haak and art curator Mirjam Varadinis – it sprawls across the city’s historic centre and into its suburbs, taking in a wide swathe of venues. Frequently, it hits on a startling match of venue and work. Unending Lightning, for instance, fills a hall of the Casa del Mutilado, an intimidating fascist-era building inaugurated as a tribute to soldiers in Mussolini’s neo-colonial wars.

These juxtapositions are helped in no small part by Palermo itself. The Sicilian capital is among the most intoxicating of cities, a place where almost 3,000 years of history, under a who’s who of Mediterranean empires, collide. There are Arab-Norman churches, Hohenstaufen castles, Renaissance palazzos, baroque oratorios, neoclassical theatres, grand Liberty-style apartment blocks and 20th-century concrete infill, scattered with no seeming rhyme or reason over the vast, genuinely labyrinthine historical centre. Spruced-up structures glower over the virtually ruined, and magnificent piazzas trail off into trash-strewn gullies. This extremity is reflected in the rhythms of the day, which stretch from manic mornings to lazy afternoons, awakening again for long, uproarious nights, during which Palermitans throng the streets until deep into the morning. We are a long way from buttoned-up Zurich, site of 2016’s Manifesta 11. 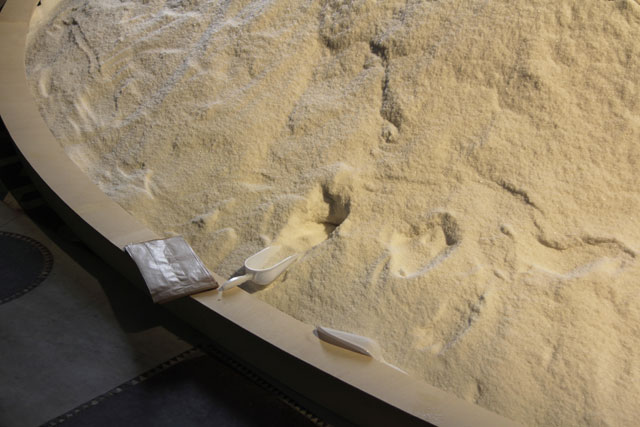 In Palermo, then, Manifesta’s curators have been handed a treasure trove. The mosaic-covered walls and ceilings of the Palazzo Forcella de Seta houses Dutch visual artist Patricia Kaersenhout’s The Soul of Salt (2016), a video and an enormous mound of sodium crystals referencing a legend among Caribbean slaves that eating salt prevented them from becoming lighter and flying back to their native Africa. Visitors are encouraged to take home a bag of salt to dissolve in water, thereby achieving a symbolic release from the past; it feels like an invitation to expunge colonial guilt. 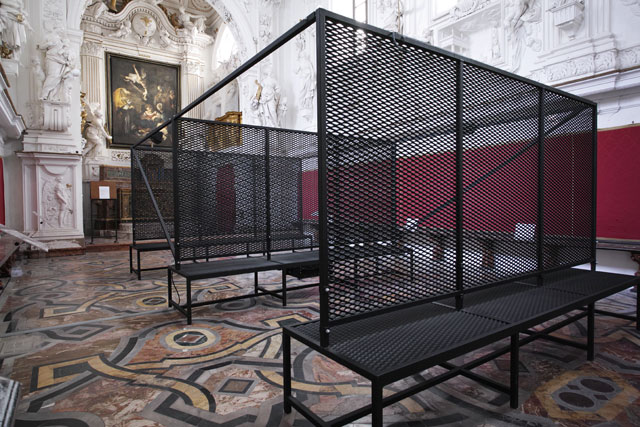 A sound installation by Croatian artist Nora Turato inhabits the Oratorio di San Lorenzo, a masterpiece of stucco in which hangs a Factum Arte reproduction of a stolen Caravaggio nativity. Turato’s work is meant to evoke the Bourbon-era stereotype of the outcast women, but comes across more as after-hours in a hipster brownstone. 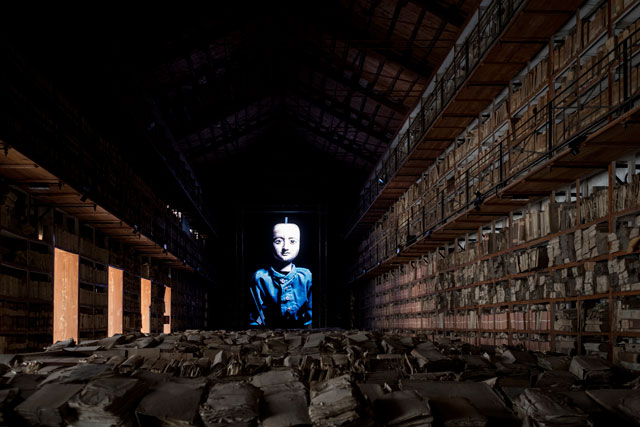 Perhaps most astonishingly of all, a film by Italian duo Masbedo (Nicolò Massazza and Jacopo Bedogni) inhabits a branch of the National Archives of Palermo, seldom opened to the public. Here, the air is heavy with decay. Centuries of municipal documents lie ossifying under thick sheets of dust. To open them by hand would cause the sheets to crumble and history to be lost. Masbedo’s Protocol No 90/6 (2018) is a tribute to the Sicilian film director Vittorio De Seta. It depicts a wooden puppet – a Sicilian speciality, as charted in an extraordinary museum nearby – shuffling about and occasionally falling over, a flawed but potent metaphor for the difficulties faced by the artist who would stand up to power. Compared to the archive itself, though, it feels like a distraction. This piece, as with Kaersenhout’s and Turato’s, is overwhelmed by the qualities of its setting, so much that the contemporary work becomes an excuse to explore the historical. Palermo is both a blessing and a burden. 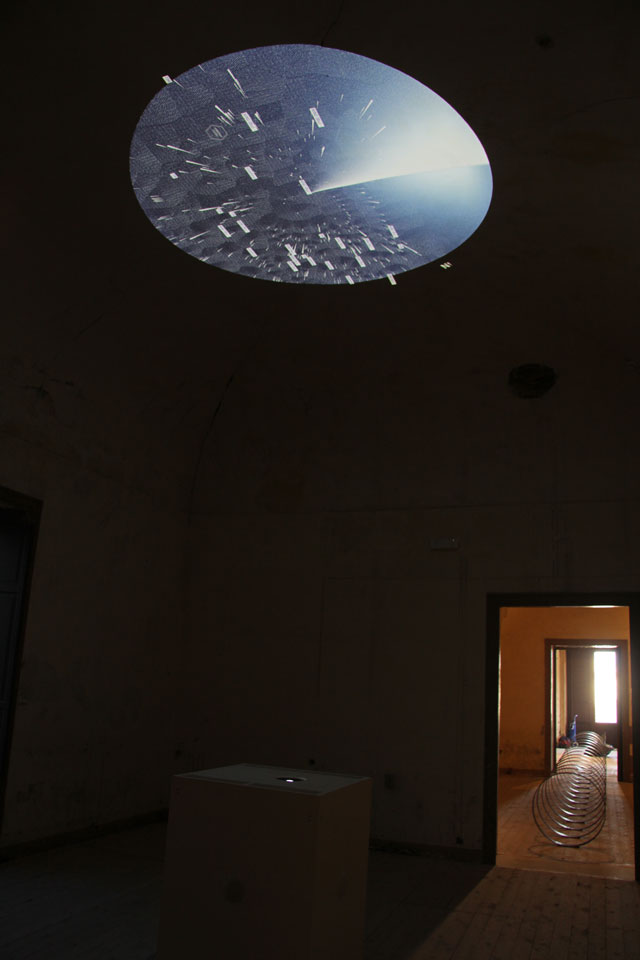 The city, as well as Sicily more generally, feeds into many of the more successful projects. As is perhaps to be expected from the architectural weighting of the curatorial team, there is a strong focus on urban study. In Palermo Atlas, a book compiled by the architectural firm OMA (where Laparelli is a partner), Palermo is posited as a nexus of ethnic, cultural and commercial “flows”, both in its long history and in the present day. Over at the semi-derelict Palazzo Ajutamicristo, Dutch information designer Richard Vijgen’s Connected by Air (2018) tracks all the “flows” travelling over Palermo’s sky, including winds, satellites and wireless signals; the result provides an eye-opening window into an omnipresent but largely invisible domain. 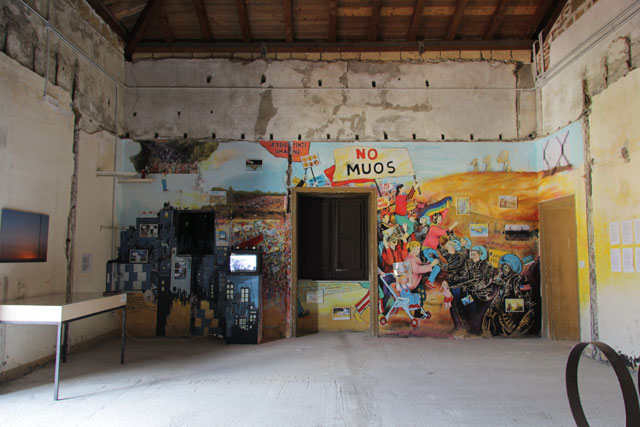 Cuban artist Tania Bruguera’s mixed media work Article 11 (2018) gathers videos, news reports, texts and satirical sketches pertaining to the protest movement around a US military global communications system housed in the Sicilian town of Niscemi, which locals claim damages human health and the surrounding ecology. As with Vijgen, Bruguera homes in on the transmission of information, in this case with the way stories can be downplayed or suppressed by the will of the press. Though her documentation, as well as a wall mural, Bruguera grants a warm, sensitive embodiment to the campaigners – something that the US film-maker Laura Poitras’s videos on the same subject elsewhere in the exhibition sorely lacks. 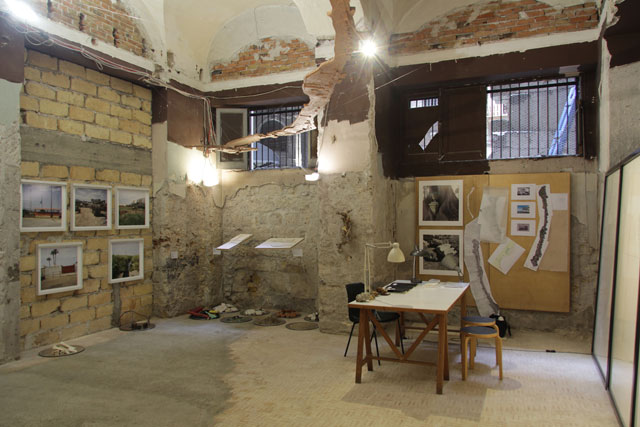 Over at the Palazzo Costantino, a disused residence at the very centre of the city, Palermitan-based architect Roberto Collovà moves Manifesta to the city’s margins. His Giardino di Giardini: Azioni sulla Costa Sud (2018) is replica of his studio, adorned with maps and photographs of the 5km coastal stretch to the south of the city centre. These images chart the area’s decline from a popular bathing and entertainment spot to a polluted no-man’s land, strewn with piles of waste; bowls on the floor contain samples of some of the substances that have been dredged up. In the Costa Sud itself, Collovà has illuminated a former railway bridge with the lights from religious celebrations, a melancholy reminder of the area’s festive past. 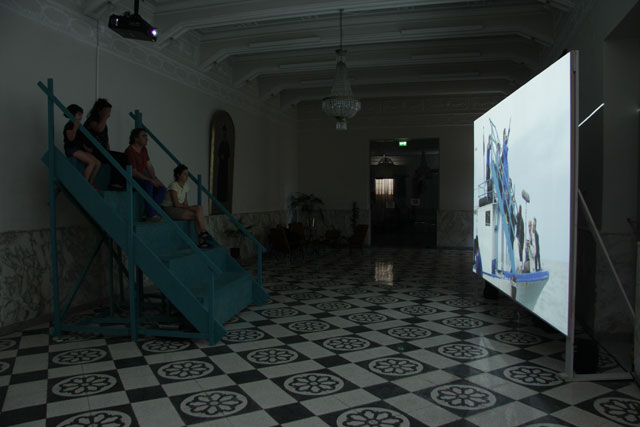 The same region is the subject of one of the most engaging pieces of video art on show, Spanish artist Jordi Colomer’s New Palermo Felicissima (2018) at the Instituto Padre Messina: a disconcertingly droll parody of a tourist boat tour, alternatively shocked, amused and bored by the locality’s chequered history. 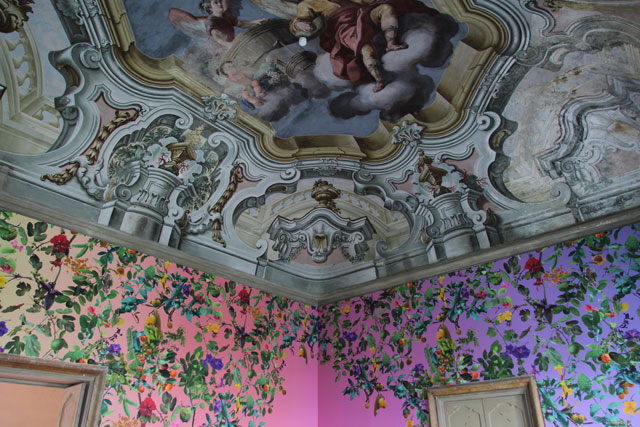 As might be expected from the biennial’s subtitle, there are many contributions drawing on horticulture as a parallel to human societies and experience, grouped in the programme as the sub-exhibition Garden of Flows. Some of these works evoke the whimsical, art-redeems-all mentality of last year’s Venice Biennale: Theatre of the Sun (2018), by Los Angeles-based pair Fallen Fruit (David Burns and Austin Young), clothes a room of the Palazzo Butera with a wallpaper patterned with a cornucopia of local fruit and flowers. Chinese artist Zheng Bo’s film Pteridophilia 1 e 2 (2016-18) shows a series of young men engaging in amorous acts with plants. Sensorially striking,  Zheng’s work also feels quite aimless. A text label claiming it evokes the “eco- queer” slides into the sort of art-babble that this Manifesta largely manages to avoid. 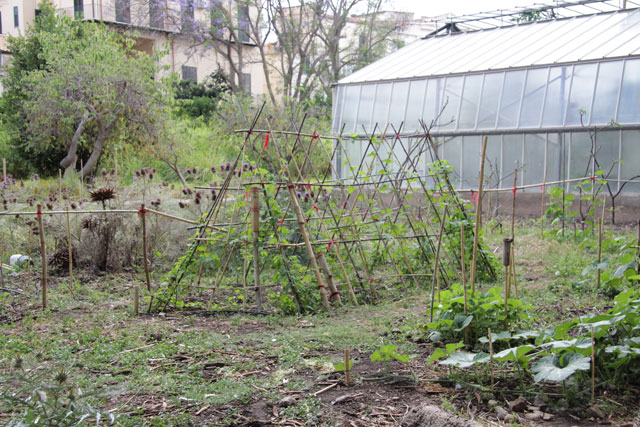 On other occasions, as with Italian artist and anthropologist Leone Contini’s Foreign Farmers (2018), the ideas – in this case the comparison of migrants with seeds – trump the manifestation, a pergola that intermingles the crops cultivated by three different immigrant groups in Italy. Seen shortly after the opening, it had yet to resemble much more than an assemblage of twigs. 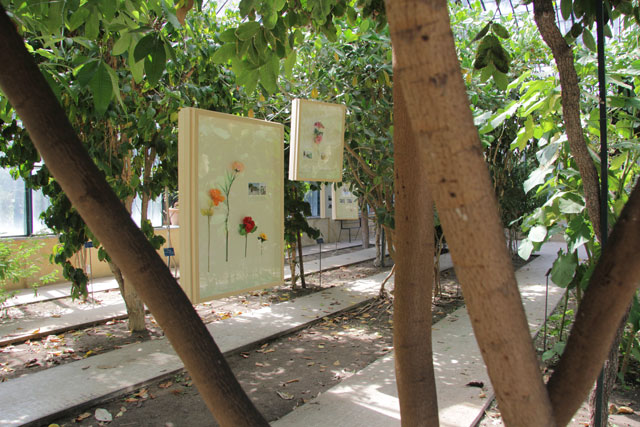 False nature proves more reliable: in a greenhouse, Colombian artist Alberto Baraya’s New Herbs from Palermo and Surroundings: A Sicilian Experience (2018) is a herbarium of artificial plants that recreates a symbolic collection of flora from across the island, displayed in cases akin to those of real botanical samples. Largely left over from religious celebrations and votive shrines, these reinforce the symbolic value of botanical forms in human experience, while also drawing into question the significance of real as opposed to artificial life. 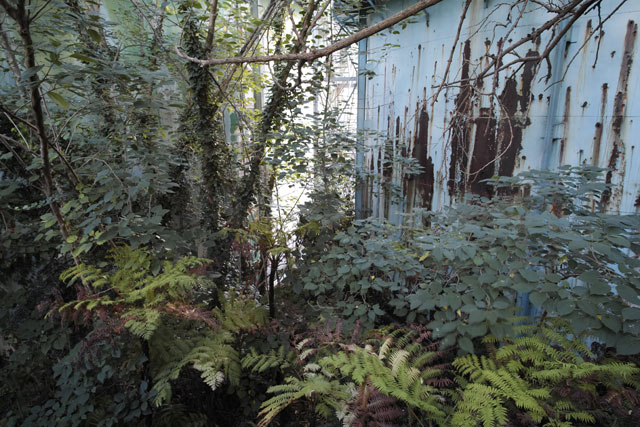 Even in a densely populated city such as Palermo, nature is everywhere, and Manifesta 12 is rich in projects that embrace that which is already there. One component of US-based artist Michael Wang’s The Drowned World (2018) is a staircase allowing visitors to climb up a disused gasometer, which now blossoms with plants biologically similar to those from the Carboniferous period: the burning of coal at the gasworks released the carbon that allowed these plants to flourish once more, a curious, unintended consequence of human activity that casts the world as a series of actions and reactions. 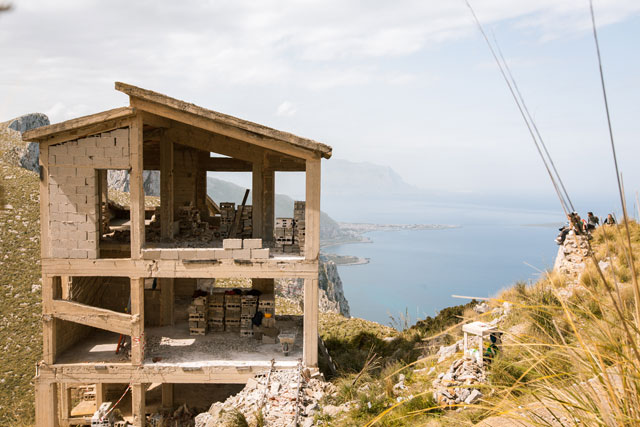 On Pizzo Sella, a promontory in northwestern Palermo which, in the 1970s and 80s, was illicitly built on by a local construction company, Rotor, a collective of Belgian architects and designers, has proposed to turn an unfinished house into a viewing platform over the Capo Gallo nature reserve. Those willing to make the long trek up who make the walk up will find a viridescent landscape and a sense of release from the humanity of the city, even as it spreads out below.

Rotor’s work also offers a breather from a pessimistic exhibition. Project after project underscores humanity’s casual malignity, and the lack of agency other humans have to undo it, whether in Lucas’s bombarded civilians, Bruguera’s protestors or Kaersenhout’s victims of slavery. 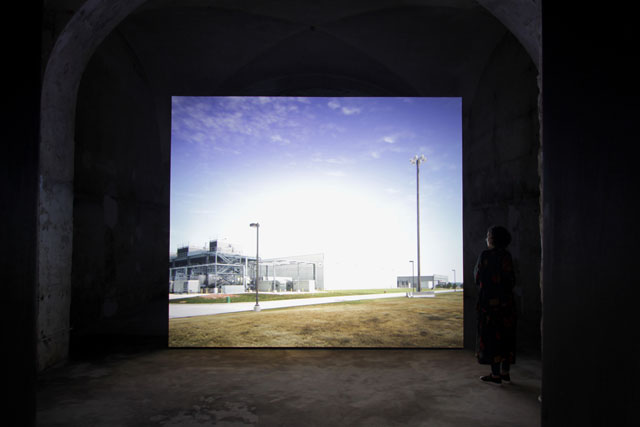 A piece by Irish artist John Gerrard, Untitled (near Parndorf, Austria) (2018) uses computer game technology to recreate, in uncanny detail, the stretch of motorway where, in 2015, the decomposing corpses of 71 migrants were discovered by police in an abandoned truck. Gerrard’s work is a marvel of technical ingenuity, but one that spotlights the powerlessness humans have to resist violence, even in this advanced age. Met with this onslaught, the back-to-Gaia approach seems insufficient ammunition. But while this Manifesta is lacking in solutions, it excels in diagnosis. And, in Palermo’s manic street life and untold architectural gems, it has a powerful panacea. 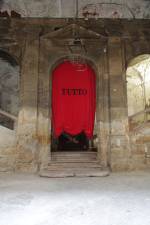 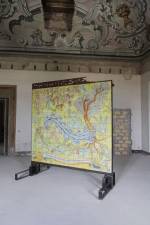