Changeable, impure, destructive, contrary – it is hard to read these adjectives as a list of compliments, but when describing the art of Sigmar Polke and his fantastic retrospective, Alibis: Sigmar Polke 1963–2010, currently on view at the Museum of Modern Art, New York, they are.

Including more than 250 works, it is one of the institution’s largest exhibitions to date and, in so many ways, it should fail: as the first show to encompass Polke’s experiments across all media, it is exhausting, and amid the cacophony of video, sound installation, paintings, drawings, prints, photographs and more, which sometimes combine to evoke a trippy disjointedness, it is hard not to be distracted. But, largely, this is all intentional – how else to present the output of a protean artist who tried so hard to defy categorisation?

Polke was born in 1941, in Oels, Silesia (then Germany, now Poland), at the height of the seductive appeal of the Third Reich. The artist fled with his family in 1945 to soon-to-be occupied East Germany, where his sister recalled that their destitute family saw the birth of another child as occasion for an additional ration card. In 1953, Polke and his family fled again, this time by train to West Germany, where they eventually settled in Düsseldorf. Here, Polke was apprenticed to a stained-glass maker before enrolling at the Kunstakademie Düsseldorf, where he studied from 1961 to 1967. While a student at the Kunstakademie, Polke befriend fellow artists Blinky Palermo and Gerhard Richter, but, unlike his friends, he was not under the tutelage of Joseph Beuys; though the influence of the elder statesman did leave an impression. Polke was part of a generation who had experienced the destruction wrought by the Third Reich and then found themselves the inheritors of a tarnished national culture. He distrusted the sanctity of the postwar status quo, ridiculed the ideals of purity and order, and, perhaps, sought solace in the irrational. This may, in part, explain the prevalence of flux in his work, but, often, Polke is too hard to pin down or reduce. To trace a neat line of progression through his career is a futile task; Polke continually spirals back on himself, or simply resets.

The retrospective at MoMA begins in 1963, the year of Polke’s debut exhibition in Wuppertal. Works from this period bear evidence of his interest in the Pop Art of Andy Warhol and Roy Lichtenstein, but Polke’s work is immediately more caustically comic. In The Sausage Eater (1963) excess is equated to gluttony not progress, as a disembodied hand guides a ridiculously long line of sausage links towards an insatiable chubby mouth. Advertising and the seductive allure of smiling girls in short skirts and bikinis appear in Polke’s painting Girlfriends (1965-66), which at first seems to mimic the moiré aesthetic of Lichtenstein. On closer inspection, Polke’s work simply teasingly alludes to the mechanical precision of the American’s uniform Benday dots; on Polke’s canvas, each dot is applied painstakingly by hand, using the tip of a pencil eraser dipped in ink and then used as a stamp.

Borrowing, mimicking, mocking, Polke engaged with most major contemporary movements, from Pop and Abstract Expressionism to Minimalism and Conceptualism. At first Cardboardology (1968-69) looks like a poor pastiche of Conceptual Art’s interest in systems and serialisation judging from its imperfect arrangement of unevenly cut pieces of cardboard into misaligned rows next to a diagram on thin, grid-lined paper. But this type of organisation is not benign; the rigour of classification has a deeply sinister Nazi heritage.

Polke’s work is as much critical as it is funny: it is hard not to laugh at Blockade ’69, a video first broadcast on television in 1970. Here, Polke performs the role of a particle, pressing his head and body against the wall with slapstick mock seriousness and comic timing as he “orbits” the room, before leaving the gallery and continuing as a particle clinging to the exterior walls of buildings and, in the final scene, the rough concrete surface of the Berlin Wall. It is easy to read Polke’s video as an exploration and critique of space, or even a cruel equation of the hegemony of the art gallery with dominance of political powers manifest in the Berlin Wall, but then this all feels too much: is everything just ridiculous?

While attempting to tease apart the function of humour in Polke’s oeuvre, the art historian Benjamin H D Buchloh asks: “Can humour be a better medium of commemoration than memory itself, when memory has become instantly sacred and falsely acculturated?”1 This can be helpful when beginning to understand why Polke was deeply sceptical about the purity of modernism. Paintings such as Modern Art (1968), with its nod to early-20th-century abstraction in its background, white border, and mix of squiggles and clean straight lines, seems at once nostalgic and sarcastic. Under the Nazis, all forms of abstraction came to be seen as degenerate, and during the late 40s and 50s, the revival of this style was seen as a way to forget the sins of the past through the recuperation of a more palatable history. Looking more closely as Polke’s pure shapes and lines, one wonders if some of the crossed lines are an unfinished swastika, but one can’t be sure. Here, memory, like abstraction, is unstable and uncomfortable.

Polke used materials as disparate as ink and arsenic, and worked across an exhaustive range of media, often crossing and mismatching media to create unique hybrids. In his series of photographs of the Bowery in New York from 1973, he uses “errors” in the chemical developing process to (re)create the image in an act that is close to painting but still strictly within the realm of photographic techniques. By allowing the images to be distorted by stains, Polke denies the photographs documentary verisimilitude, but, simultaneously, the supposed faults in the photographic process express the dirt and decay that he had witnessed in the Bowery. At times it feels as if Polke is attacking art – chemicals literally burn his prints and in Watchtower II (1985), the unfixed silver halide that constitutes the image leaves the painting sensitive to light, moisture and heat, as the surface slowly darkens over time, obscured by its own structural makeup.

During his lifetime, Polke regularly frustrated attempts by curators, dealers and critics to define his oeuvre, and no neat conclusions are drawn here. The cumulative effect of viewing all of Polke’s works is confusing, but an hour later, you’ll probably want to return: there is too much for a single viewing. 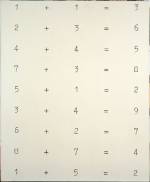 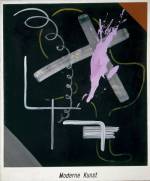 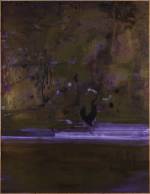 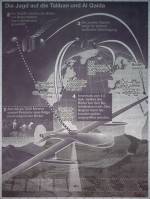 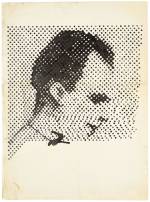 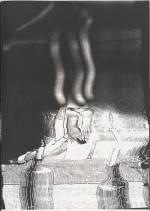 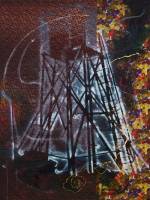