Lynette Yiadom-Boakye: ‘Maybe I’m not as interested in people as I thought I was’

Lynette Yiadom-Boakye: ‘Maybe I’m not as interested in people as I thought I was’

The artist, whose latest exhibition, Verses After Dusk, is on at the Serpentine Gallery, London, talks about how she makes her paintings timeless and placeless, and her interest in the nature of painting itself and what that does to the subject of her work

Lynette Yiadom-Boakye, who was born in London in 1977, studied at the Royal Academy Schools, London, Falmouth College of Art, Cornwall, and Central St Martins, London. She is a figurative painter who works in oils. She has had solo exhibitions at the Chisenhale Gallery, London (2012), and the Studio Museum in Harlem, New York (2011). Her work has featured extensively in group exhibitions, including MIRRORCITY at the Hayward Gallery, London in 2014. She was shortlisted for the Turner Prize in 2013. She talked to Studio International from her studio in east London.

Kate Tiernan: When did you first become fascinated by people and the observation of human nature, and did the fact that your parents were both nurses have an influence on that?

Lynette Yiadom-Boakye: Maybe I’m not as interested in people as I thought I was. I used to spend a lot of time staring, but I don’t think it was an interest in people so much as the stories that might be around them. I don’t consider the paintings portraits, particularly. I wasn’t really about depicting real people, but one thing I do remember was looking at people and trying to work out what their story might be, or where they were going, what they did. I don’t think I can blame my parents. What they did was quite a different interest in people.

KT: Going around the show at The Serpentine, I found myself thinking of Peter Doig, Chris Ofili and Per Kirkeby, not because of the figures, but because of the depiction of space and painterly quality. When you are making the works, do you have any sense of place and the figures’ relationship to where they are?

KT: Yes, and the interiors that have a generic sense about them and a suggestion of interior spaces, depending on what the figures are doing. I wondered how important place was, and which came first in the process of doing them?

LY-B: I didn’t want to suggest too much about the time. Any type of furniture is suggestive of something. If, for example, it’s a Louis XV chair, or something that was very much of the 1960s or 70s, or set in a particular time, that would be a problem. So the interiors tend to be this blank, dark background, which suggests something interior but is not really specific. There is one in the show of a man walking through a doorway, but it could be anywhere. Or there is a series with a cream background that meant the figure had to shift. It’s a lot about how the painting has been constructed: there is a very particular way to build up the dark background that affects what the figure is and how it sits or stands. The cream background feels as if the figures are encased, and sometimes there is a bowl of flowers or a bunch of flowers sitting within that as well. So there are all these specific things to do with that type of interior space that aren’t really describing anything, and with a particular kind of light that could be anywhere and isn’t really suggesting anything. Then there are ones that are quite clearly a landscape, or an expanse of outdoor space. Again, the landscape is timeless, without buildings in it, a bucolic rural scene, the green of a field, or a forest or a seascape even, and nothing in it suggests a particular time in history.

KT: What kind of outdoor space do you feel most informed by?

LY-B: There’s something quite general about them. Maybe they are all quite English somehow. The greenery is English. Some people have said they look quite American, and maybe there is a touch of that, but it’s more likely just what I’ve seen of an English landscape – they could be anywhere.

KT: What’s your process for painting? How do you begin?

LY-B: I work from scrapbooks, photographic sources, drawings and other works – just bits and pieces. A lot of it involves improvising what’s there. On the canvas, it always changes, and it wouldn’t work to map it out.

KT: How do you arrive at the titles? Do they come before the painting or out of it?

LY-B: It’s like a parallel thing, so sometimes it is after the work is done, occasionally it’s before, but it’s never direct. For me, the titles are an extension of the work not an explanation of it.

KT: In the show there are some clear visual dialogues between works. How involved were you in the curation of the show?

LY-B: I was really involved. Amira Gad [exhibitions curator at the Serpentine] and I hung the show together. We worked out what we wanted in it beforehand because we had to borrow the work. We did it with a model, but, of course, that all changed as soon as the work arrived. There were certain things that stayed the same; the first thing you see as you walk in the back room pretty much stayed the same. What was really enjoyable was that we had all these options and possibilities. There were definite relationships between the works that I had thought about beforehand, but, until it’s all there, it’s quite hard to describe that to someone. We did have to think about every sightline within the space – when you’re looking at one thing, what you’re seeing out the corner of your eye, or if you are standing in the doorway, the view through that doorway was important. Amira knows that space and had great ideas about how to make that happen. It is how I work generally in groupings or series. With this it was all unknown, but it was possible to make relationships between things that had either been made at the same time or followed a similar pattern or body of work.

KT: How was the shift in gear for you when you moved to the recent etchings, which I imagine demand a very different pace of work?

LY-B: It’s good and completely different. It is such a massive shift in gear – it’s that thing of having to go back and edit. You etch the plate one time, then you print it and see that it’s all wrong, so you take it away again and have to go through the whole process of putting the wax back on and preparing it so you can work on it and then etch it again, and the whole thing starts again. It’s slower but I got round that by working in a series. Some were discarded, but it was about producing several of something and editing some out. I managed to speed it up in my own way, though it was still a much slower process, and I like that. There’s something so satisfying about the pace and the process itself, which is very rewarding. I love the mark, it’s so fine; I was working on copper this time. It’s more delicate, and you have to be a lot more careful handling it, which isn’t very good for me!

KT: How important is the history of painting in your work?

LY-B: Part of my training and the training I imposed on myself was to do with the European tradition, but then, branching off from that, it became something else. As I started to think of the works less and less as portraits, other questions started to come up and other things started to interest me more about the actual nature of the painting itself and what that did to the subject rather than what the subject did to the painting.

KT: Could you tell me a little bit about the work 4am Friday?

LY-B: It is part of a series of men in striped tops, all with the same background, and they are always looking forward with the exception of one. Another one was on view in Encounters and Collisions, Glenn Ligon’s show at Nottingham Contemporary. The title for each of the men was always the time and day of the week, and it was something I used to return to at the beginning of every work. This one came towards the end of producing new work for this show, and this time he is seated. I’ve spoken quite a lot about these in the past, as they recur, and it was something to do with reminding myself of something that seemed to be the essence of everything that I did. For some reason, it was embodied in him and the other guys wearing striped tops.

KT: Do you know when you’re working whether you want to make the figure looking away from you or at you?

LY-B: That’s one of the first things I think about when I’m starting something. It is handled so differently one way or the other. It brings a different energy to what the hands are doing: the background and the overall pose is really important. The man’s face in 4am Friday took a while. Setting the eyes in the right position took time to fix. I wanted his eyes to do something particular and I wasn’t happy with the first incarnation of him. The area around his head darkened and there was something about having the shape of his head very clearly defined that changed the whole feel of the painting, that he somehow lost control.

KT: I was struck by the incredible depth of colour in the plumage of Verses After Dusk.

LY-B: It was something about taking it away from the real. Sometimes my own sense of fantasy takes over and I love that freedom that means they can be anything and become anyone. That was one of the first birds to be in colour. All of the birds in the other paintings that belong to that series have worn plumage, but it has been black.

KT: What kind of fiction do you read?

LY-B: I read anything, but recently I finished Donna Tartt’s The Secret History and I am halfway through her second novel, The Little Friend, which is wonderful. I love southern gothic and this is a very contemporary version, but authors such as Flannery O’Connor don’t get much darker than that. I love James Baldwin, Toni Morrison and Percival Everett, a writer from LA whose book Erasure is just a genius piece of writing; it encapsulates so much of what I think at times.

KT: Is reading an important place for you?

LY-B: It feels more and more like a luxury, and it shouldn’t be, but I don’t have much time to do it; unlike when I was a child and I always had my nose in a book. I read so much as a child, including some things that weren’t really appropriate for children. One of the authors I read when I was really, really young was Howard Jacobson, and I absolutely loved him.

• Lynette Yiadom-Boakye: Verses After Dusk is at the Serpentine Gallery, London, from 2 June – 13 September 2015. 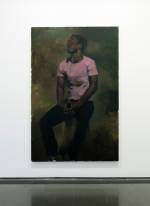 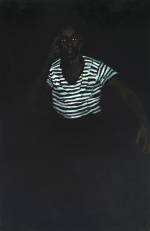 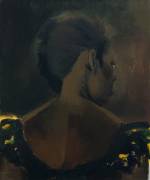 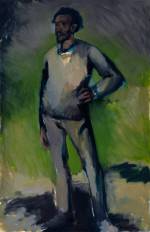 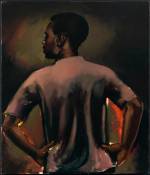 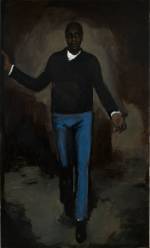