Featuring works by 50 artists and digital / lighting studios and producers, this feast of light and sound turned London into a spectacular, highly photogenic, pulsing theme park. But in its efforts to maximise entertainment, it fell short on actual artistry 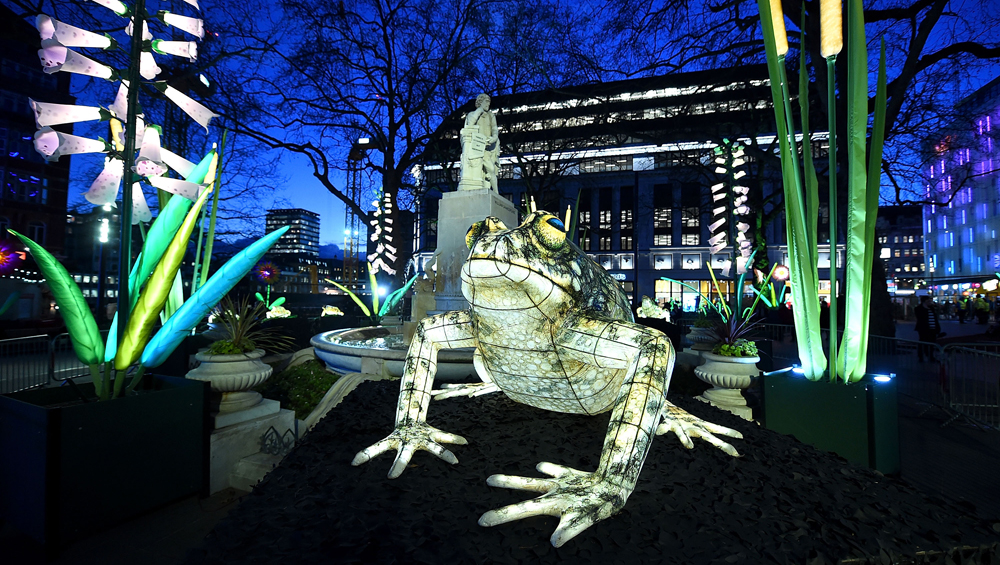 There is a fine line between public art and a stunt, said Alex Chinneck, at a Central Saint Martins lecture last year – a statement with which most of the artists I admire would disagree, heartily. At the time, I thought it said more about Chinneck’s practice than it did about the direction in which most enlightened folks are trying to steer the curation of public art generally, although this 2018 outing of Lumiere London does not give much cause for hope. Interestingly, Chinneck’s latest offering is to engineer a brick facade with a huge tear in it (Six Pins and Half a Dozen Needles, 2017), in Hammersmith – the aim of which can only be to dazzle prospective tenants in this speculative office/retail building so they might overlook its complete lack of architectural charm or character. If that work reeks of an artist happy to massage the egos and portfolios of London’s landlords and property owners, then the plethora of property companies sponsoring this outing of Lumiere London warns of public art’s increasing co-option as a form of low-cost, high-kudos developer PR. 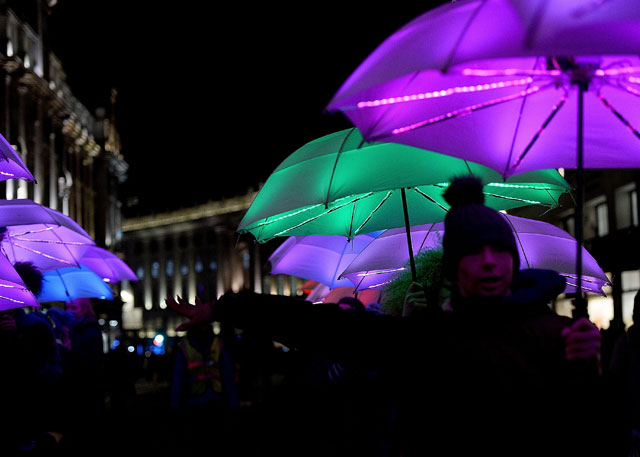 There were more than 50 “artworks” in the 2018 iteration of Lumiere London, curated by Artichoke, an organisation that calls itself “the UK’s leading creative producers for art in the public realm”. I would challenge its selling of the event as “an extraordinary and immersive nocturnal art exhibition of light and sound”. Most of the works, while pretty enough, deliver as much genuine insight, imagination and provocation as a lava lamp. 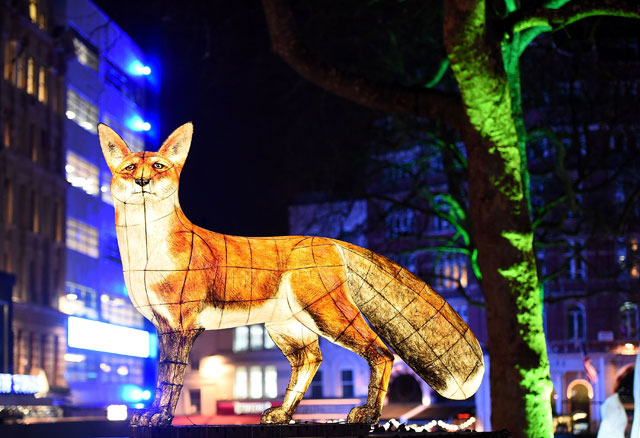 Expectations – even already low ones - hit rock bottom with the chosen launch venue of the producers and organisers, including the mayor of London, Sadiq Khan, who commissioned the festival. The event kicked off in the heart of Leicester Square with the banal, Disneyesque offering of Nightlife by Lantern Company with Jo Pocock. Gurning radioactive frogs, giant glowing bulrushes and oversized foxgloves, flagpoles festooned with pastel butterflies: it was nothing more than illuminated playground sculpture, serving only to magnify the tackiness of one of London’s tackiest tourist spots. 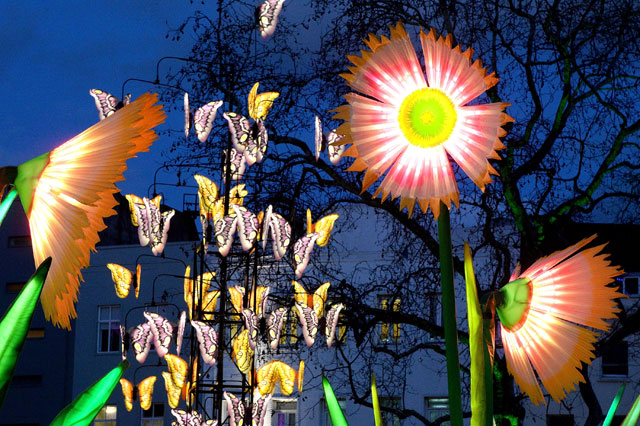 If many of the works included moving or interactive elements, they did so in a very binary way: to enhance a spirit of instantaneous, childlike enjoyment in the visitors. Some of them harvested data – such as the, admittedly striking, triangular tunnel The Wave, by Danish designers Vertigo, on the South Bank riverside, the pulsing lights of which responded to the movement of the people passing through or around them. But this transmission of data was not in any way meaningful. Making the buildings and streets look good was the order of the day. 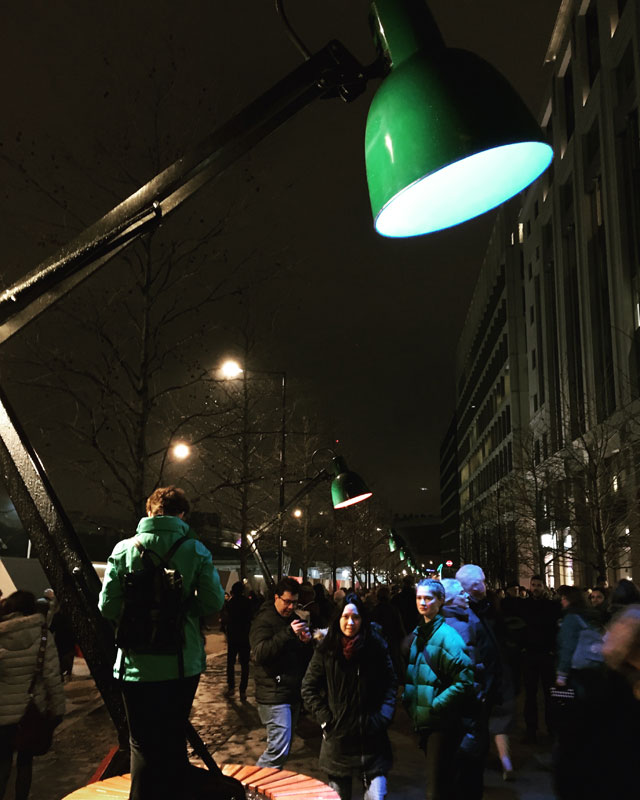 Dot by Philippe Morvan (France) pulsed pretty patterns of light across a matrix of large round lightbulbs in time to music in the weirdly futuristic landscape of Pancras Square, a new piece of public realm near King’s Cross to satisfy Google and its tech rivals who are flocking there. Around the corner, a street full of giant desk lamps paraded down the new King’s Boulevard, in the form of Lampounette, by French design studio Tilt. Greek artists Maro Avrabou and Dimitri Xenakis suspended a cloud of plastic watering cans near the area’s gasholders (yes, it is cute that they turn from white in the daytime to multicoloured at night, when they start pouring fibreoptic “water” on the grass below … but what does it mean?).

In the absence of much actual art, the festival publicity made a lot of noise about the involvement of “real artists” – trumpeting, for example, the presence near Carnaby Street of Julian Opie’s Shaida Walking (2015) – a work that we have seen already (not to mention its numerous siblings), as it premiered at the 2016 Lumiere London – or Tracy Emin’s neon platitude Be Faithful to your Dreams, at St James’s churchyard on Piccadilly. This greeting-card sentiment takes on a whole new meaning when pinned up against one of the most expensive pieces of real estate in the world. In contrast, a nearby work My Light is Your Light (2014) by Palestinian artist Alaa Minawi, is transformed into something far more powerful by its surroundings; a tribute to Syrian refugees, these skinny neon stick figures looked frail, bent and world-weary as they tread lightly across the wall of St James’s churchyard.

Against the overwhelmingly eye-candy-esque backdrop, it is hard to say whether the quality of this and other worthy works would have been apparent to the casual onlooker. I liked the way photographer David Ward blew up his images of the feet of Rambert’s dancers: projecting these enormous work-weathered body parts on to the side of their cuboid headquarters in Waterloo created a nice contrast between curves and angles, skin and concrete.  Clever use of projection mapping technologies brought viscerally thrilling moments such as that of Daniel Canogar’s Asalto, projected on to Westminster City Hall; its facade appeared to be crawling with residents and workers, slowly creeping to the top of the building. And to observe the rapid cycling of Camille Gross and Leslie Epsztein’s Voyage across the face of the Hotel Café Royal was to experience the building melting and reforming through time in a dazzling display.

Data was deployed occasionally to riveting effect, such as in the work of Miguel Chevalier, whose Origin of the World Bubble, dangling over Oxford Circus, is inspired by the world of microbiology. Calling his style “technological baroque”, he delivers a vibrant translation of the division of cells into a colourful choreography of organic and pixelated images. 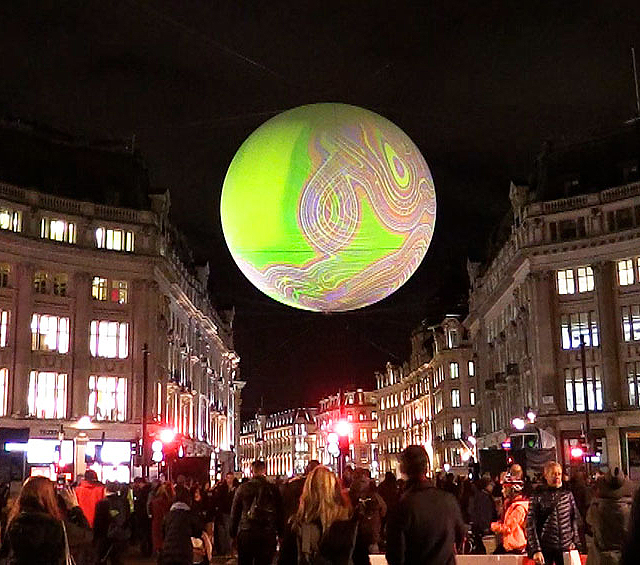 One of the most intriguing works (on paper), if only for its scale and supposed subtext, was Waterlicht by Dutch innovator Daan Roosegaarde, which was said to be highlighting the risk of global warming and rising sea levels. He filled Granary Square at King’s Cross with sprayed mist and then projected blue lasers and a watery, rippling effect across this mistscape. 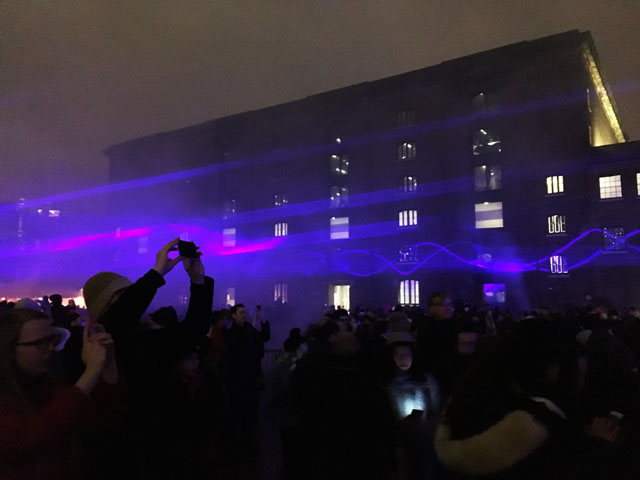 Apparently, you could tune in to an accompanying soundtrack on your mobile phone, but unless that soundtrack included facts and figures on how our wasteful lifestyles are killing off the ocean’s diversity and exacerbating the planet’s rising temperatures, I don’t see how this work acts as any kind of warning. (And I would wager good money that Granary Square was awash with discarded plastic bottles and a sea of other detritus once the lights went down each night at 22.30). 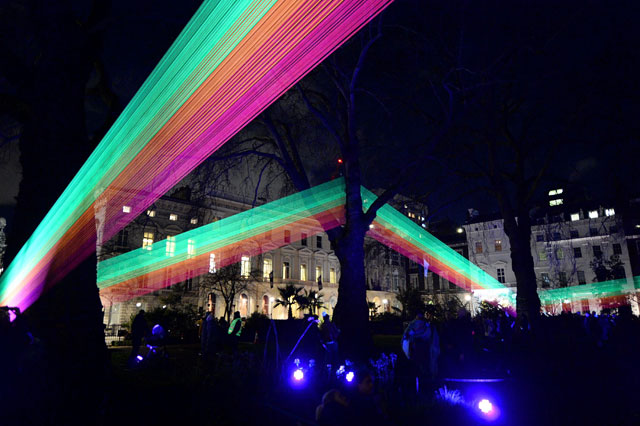 The previous incarnation, in January 2016, featured far fewer works spread over a smaller area. The works I witnessed that year seemed more thoughtful, interrogative of what makes a place, a neighbourhood. It attracted 1.3m visitors. The visitor numbers for 2018 are not yet in, but judging by the size of the crowds fighting their way along London’s narrow streets and packed piazzas over the festival’s four evenings they will have exceeded expectations. And as the exposure grew on social media, even when the weekend’s drizzle turned to a downpour, nothing could keep the hordes from congregating in these already popular neighbourhoods, to harvest their own social media kudos from all these hugely photogenic interventions. 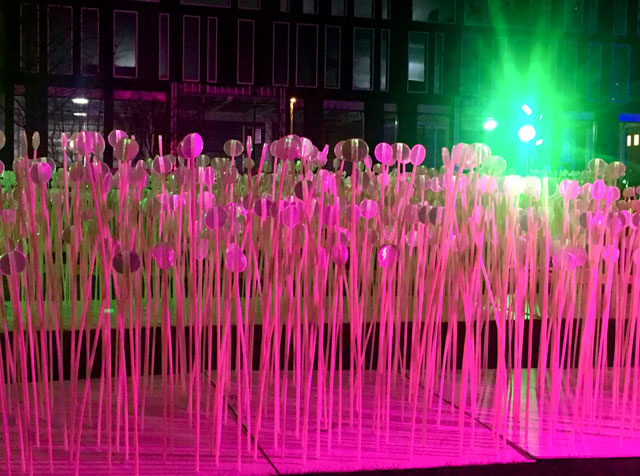 And most of them did look spectacular – often better on smartphone screens than in real life. Judging by the many thousands of posts on Instagram (not that we would want to encourage such accolades to be a marker of artistic quality or credibility), the most popular were Westminster Abbey’s compelling The Light of the Spirit. Repeating 2016’s most popular attraction, Patrice Warrener again transformed the facade of this Victorian gothic building by colouring in, with light, the saints and martyrs that are carved into it. This year, he repeated that trick on the great west doors. Another big social media hit was the mesmerising Entre les Rangs by Rami Bebawi and Kanva, a waist-high field of illuminated, reflective flower stems that visitors could walk through, in Lewis Cubitt Park at King’s Cross. 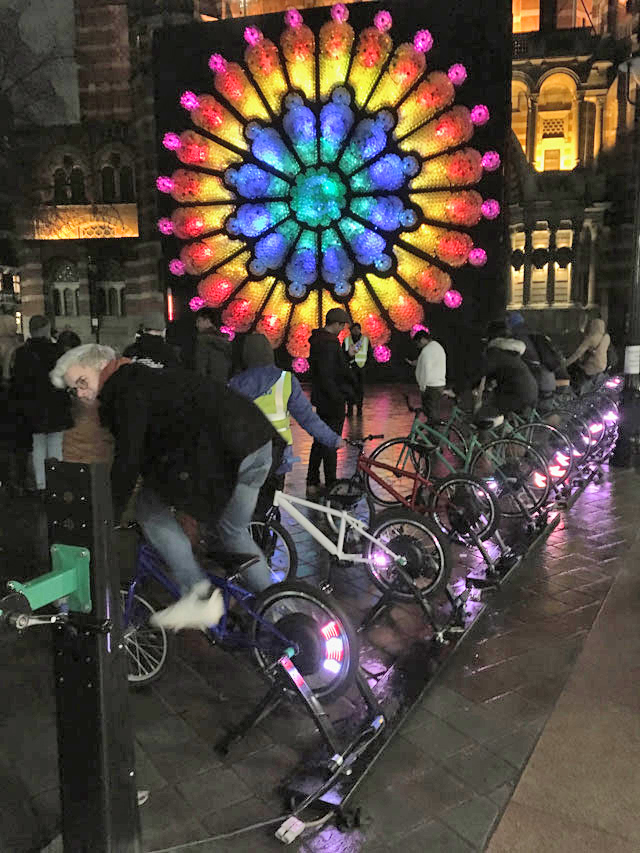 As the drizzle petered out and the final half hour loomed, I made my way to Westminster Cathedral, up in the heart of Victoria - another almost unrecognisably gentrified area of central London - to catch the last moments of The Rose, by Mick Stephenson with Electric Pedals. Stephenson had emulated the classic cathedral rose window using coloured light and recycled plastic bottles, which lit up in full spectrum when powered by a cohort of madly pedalling volunteers on the nearby bicycles. It was fun to participate. But it wasn’t art. And that pretty much sums up Lumiere London 2018. 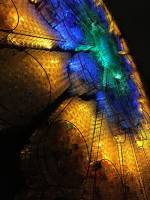