Lucio Fontana: On the Threshold

Lucio Fontana: On the Threshold

A miraculous retrospective revivifies the Argentine-Italian painter and sculptor, laying bare the breath of his vision and revealing an artist constantly surging forward 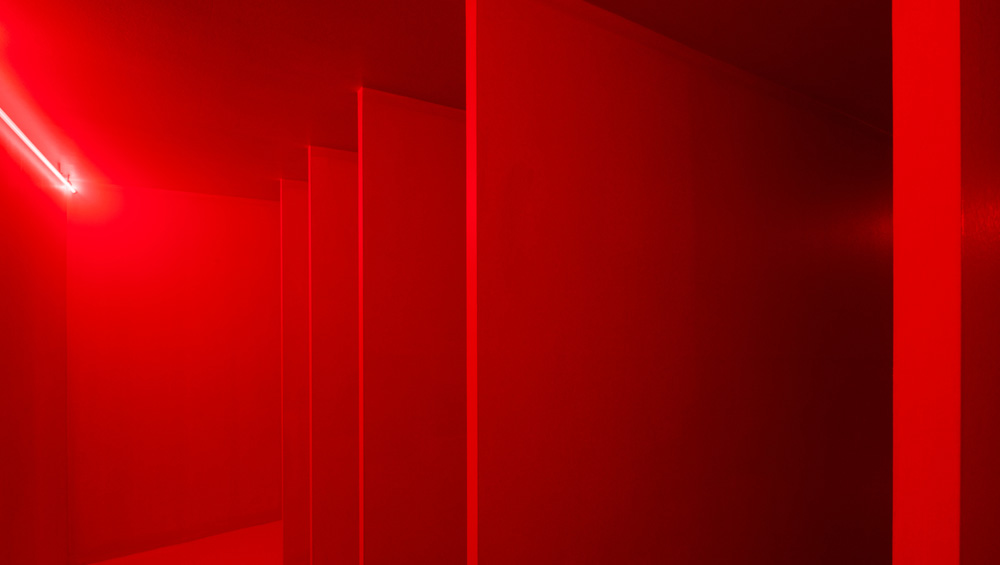 I thought I knew Lucio Fontana (1899-1968). The Argentine-Italian artist is a hardy perennial in the commercial art garden; I challenge you to find a major art fair that isn’t speckled by his canvases. His Cuts series, more properly known as Concetto spaziale (Spatial Concept), saw him paint monochromes then slash them with a scalpel, often revealing a black void beneath the tear. Fontana seemed to do this with a dash of drama, casting radical lacerating abstraction’s claim to objectivity and gesturing to an unknown dimension beneath. The art photographer Ugo Mulas depicted Fontana bent down with blurred hand, as if he had wrinkled reality with a single swift motion. In reality, the process was more laboured: Fontana shaped the rifts with his hands, adding a tactile, human element to the pseudo-heroic act. 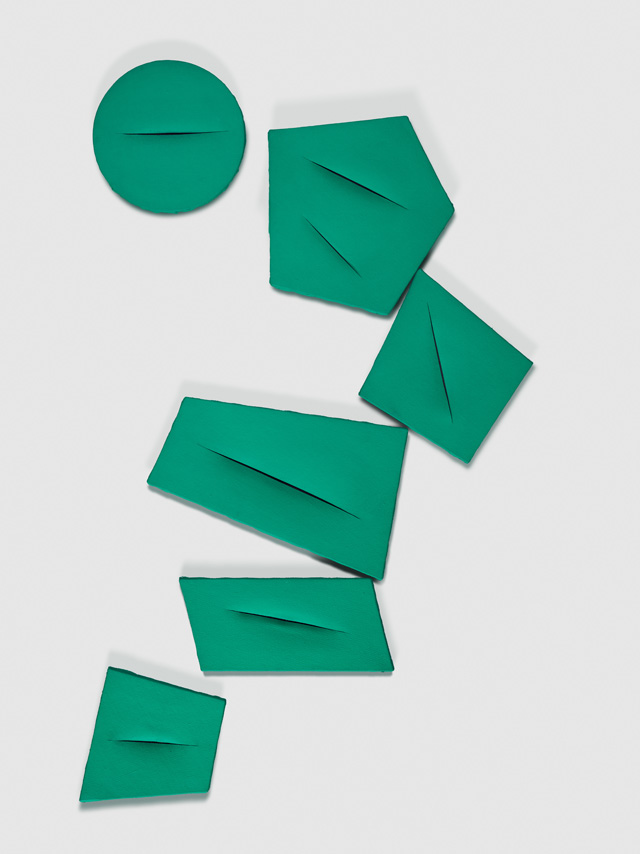 The Cuts now appear to be in infinite supply, sold again and again in auctions, fairs and galleries. In this context, as artworks among many, the power of their gesture is diminished. They become decorative objects, tasteful ornamentation for an oligarch’s drawing room, shorn of their implicit violence. This violence itself is more than a little unpleasant. It draws on the misogynistic trope of the female genitalia as a nothingness, the 0 to a masculine 1 (this fixation is made explicit by a 1960-64 ink drawing that shows a female nude, legs splayed around a splotch of darkness). To me, then, Fontana was both sanitised into high-end decor and pardoned for the discomfort that his Cuts inculcate. And though I had seen other works – canvases punctured with more ambitious holes, scattered with a handful of Murano glass shards – the Cuts seemed the crux, the images that came to mind when one referred to “a Fontana”. 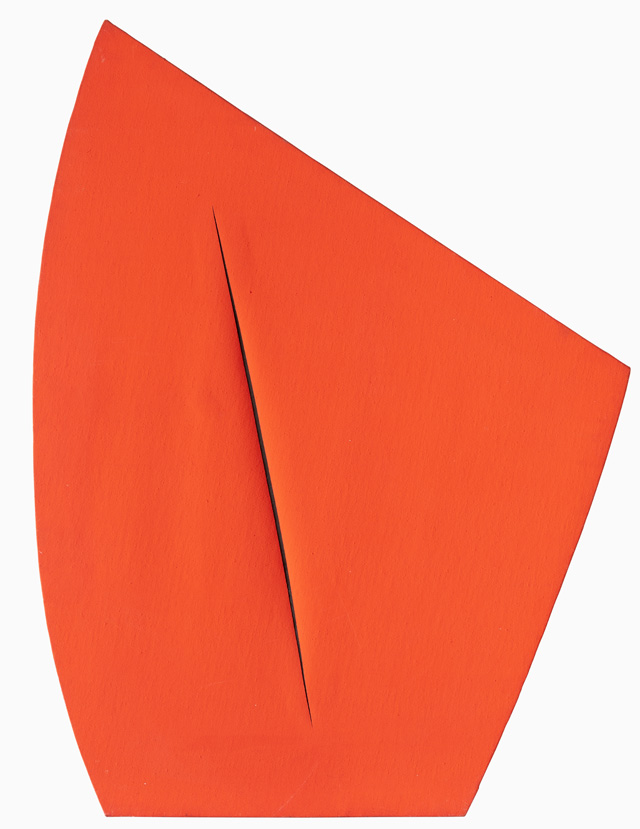 On account of these hang-ups, it was with some trepidation that I approached On the Threshold – a rare full Fontana retrospective, which opened this January at the Metropolitan Museum of Art and has now come to Europe, courtesy of the Guggenheim Bilbao. It did not take long for me to be disabused of most of my notions. The exhibition, superbly curated by Iria Candela and the Guggenheim’s Manuel Cirauqui, affirms Fontana as a dynamic and chimeric artist who more than deserves his place in the annals of modern art, although perhaps not for the reasons his contemporary omnipresence might suggest.

Crucial to the exhibition is the foregrounding of Fontana as a sculptor, rather than the painter that the canvases of the Cut might suggest. In this, he had lineage: his father was a carver of grave monuments, and Fontana, while in his early 20s, worked with him. In 1927, Fontana moved to Milan to study sculpture at the Accademia di Brera, where he trained under the modernist Adolfo Wildt. There are traces of Wildt’s mask-like busts in some of Fontana’s earliest works – a 1931 terracotta, Portrait of a Girl, for instance, with its simplified face – but the young sculptor quickly shot off in a dozen different directions of his own. 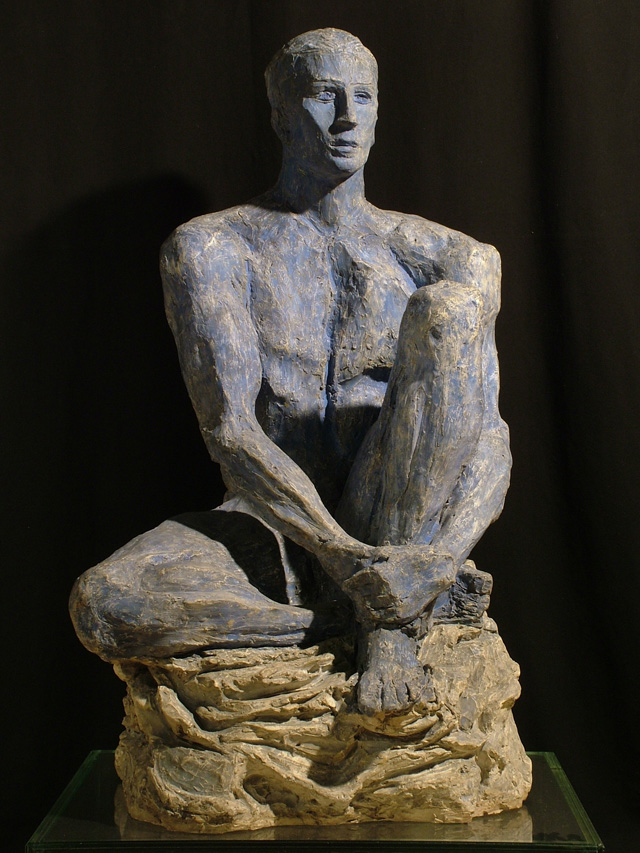 Largely choosing to work in craft materials such as plaster, wax and terracotta over the sculptor’s conventional marble and bronze, Fontana went about shaping substance in as many ways as possible. There are craggy seascapes in miniature, far more convincing as matter dredged up from the deep than any Damien Hirst excavation. There is a plaster piece, painted blue, of an Olympic athlete (1932), which is not a million miles away from the neoclassical official statuary of Mussolini’s Italy. A particularly intriguing work of 1931 sees Fontana paint two black figures on an uneven fragment of terracotta, a rough-hewn crib on Ancient Greek black-figure pottery. 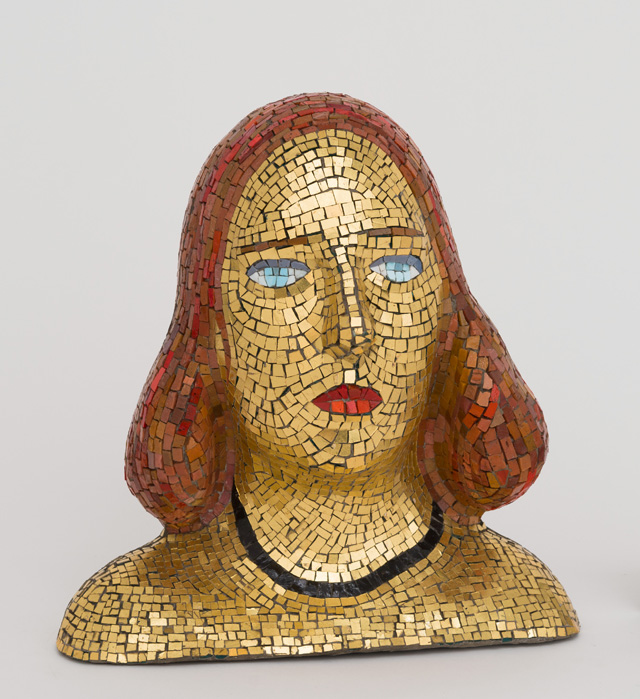 In the early 40s, Fontana returned to Argentina for a competition, and remained in the country until 1947. Here, his palette expanded further: a bust of his wife, Teresita (1940), is a three-dimensional mosaic that evokes both Byzantine and Aztec art, while a figurative stature alternatively titled Aquiles or David (1946) saw him use gesso. Not all these attempts were successful. A bronze Spatial Sculpture (1947) that depicts a rocky circular portal has some aspects of fish-tank kitsch. But there is a thrill to seeing Fontana try out so many different modes, even if it is sometimes difficult to perceive what he is grasping at, a pursuit made harder by the destruction of his studio and its contents during the second world war. 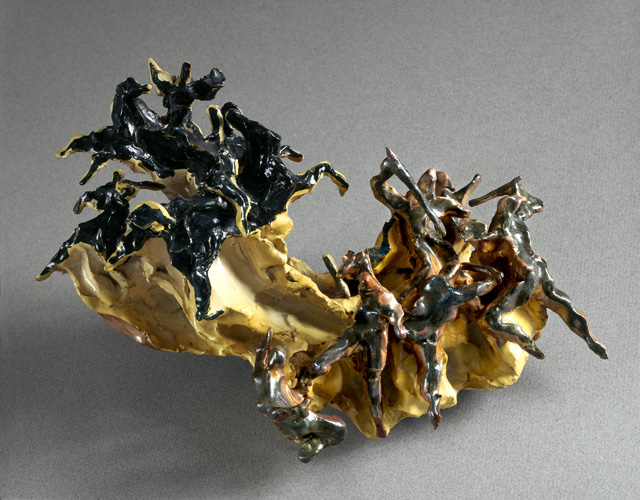 The turning point came in 1946. In Argentina, Fontana had become aware of the region’s rising tide of concrete art, with movements such as the Buenos Aires-based Grupo Madí creating playful geometric abstractions that disregarded such normalcies as rectangular canvases. In the light of the technological march that had accelerated with the war, Fontana became particularly interested in finding a way to capture the invisible forces with which we share the air: waves and rays, signals and radiation, which he saw as a fourth dimension. In response to these artistic and technological shifts, Fontana concocted the White Manifesto (Manifesto Blanco) with his students. It proposed an art that would, by fusing architecture, sculpture and painting, express this new reality. He returned to Milan in 1947, and christened his project Spatialism. From herein on, the bulk of his output would be Spatial Concepts. 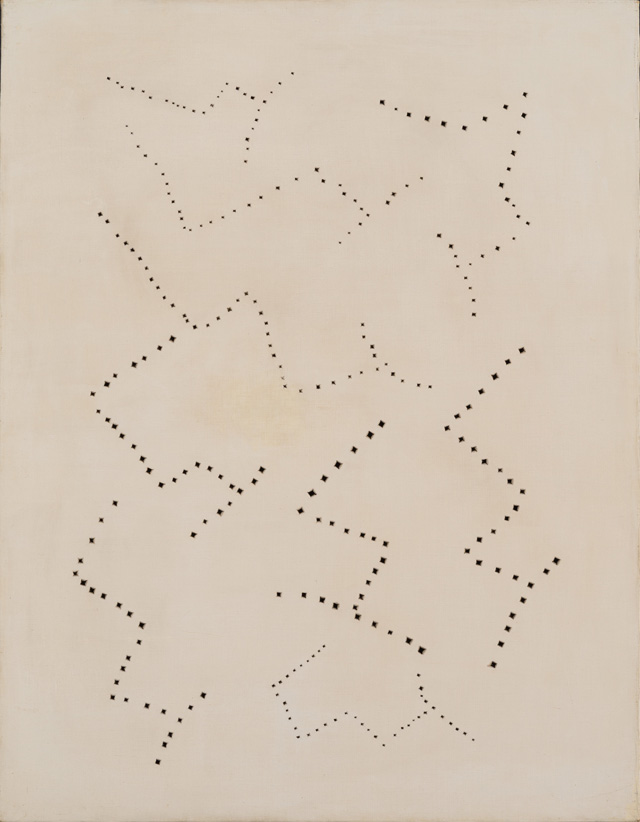 In 1949, as he entered his fifth decade, Fontana created his first works on canvas. Before the Cuts, there were the Holes, rough apertures punched into the surface below. The first Spatial Concept saw a chaotic agglomeration of holes punctured in paper then mounted on a canvas. The following year, he began to perforate the canvas itself, sometimes covering it in thick layers of paint that he would mould with his hands. Rather than settling into a comfortable, repeatable mode, however, the Holes are restless in their variety. No pair of On the Threshold’s sizeable inventory looks the same. One 1951 canvas, smeared in sand-hued oil paint, has Fontana create a twirling, looping pattern, while another from 1950 has zigzagging seams, like cracked desert soil. 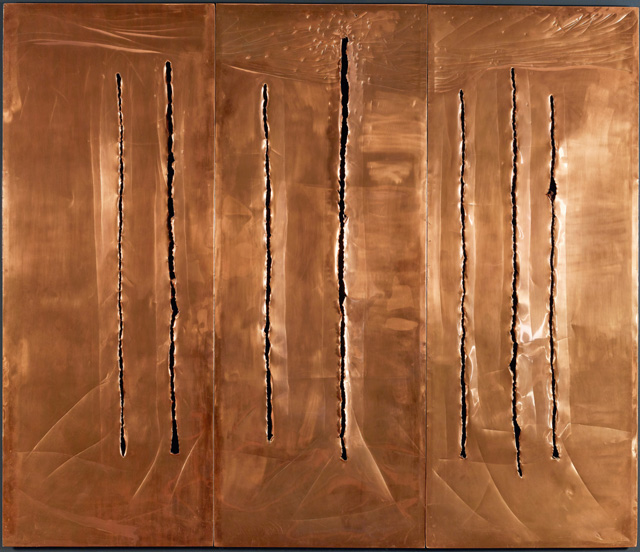 His sculptor’s interest in unconventional material also continued and, in 1950, he made Spatial Concepts on tin and terracotta. The latter, subtitled Il Pane, has an outline redolent of a slice of bread – a touch of humour, perhaps, but also a statement of interest in the fundaments of human subsistence. Later that decade, Fontana would throw shards of coloured Murano glass at his painted canvases, embedding them in the wet paint to add an additional spatial dimension. Named Stones, this series represents Fontana at his most alchemical, gesturing towards the mystical in his interplay of light and material. The Natura series of rounded sculptures in ceramic and bronze are equally gnomic. Punctured or slashed, they look as if they contain the weight of the universe.

Which brings us back to the Cuts, which Fontana began in 1958. The selection in Bilbao, which includes the first and last examples, reveals them to be an ongoing process, with Fontana circling around his ideas in search of their perfect expression. Initially, he created rows of cuts on gestural brushstrokes – a particularly overwhelming example from 1958 has a pleasing sea-green palette – before gradually refining his technique to involve a smooth, even layer of paint and a lower layer of black gauze visible within the incision. Although my grievances around Fontana’s misogyny remain, On the Threshold’s judicious selection vividly recaptures the excitement created by shattering the painted field. 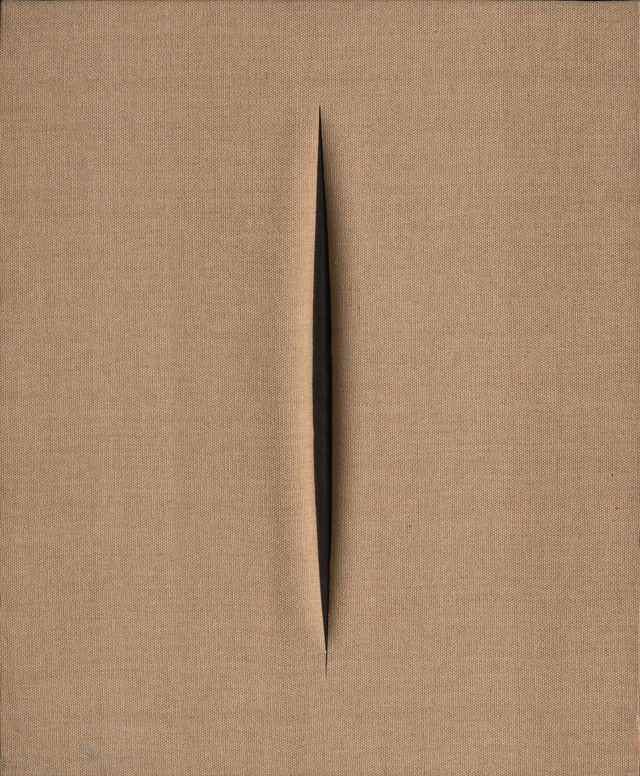 Works on canvas never monopolised Fontana’s career, which sought new modes of expression until the end. In 1951, he designed a sinuous neon sculpture for the Triennale di Milano, long before the American light art of the 60s. At the 1964 edition of the triennale, he presented Spatial Environment: Utopias, a darkened corridor illuminated by eerie dabbles of green lighting, and so pioneered the immersive installations that would become a hallmark of contemporary art. A second Spatial Environment (1967) plunges you into a crimson labyrinth that pre-empts the sinister places of Bruce Nauman. These latter two works, reconstructed by the Fondazione Lucio Fontana, take the spectator into the penumbral world beneath the cut, into a mysterious unknown. Fontana’s final Spatial Concept (1968) shows a single slash on a raw, unpainted canvas, wider than the norm, as if ushering us into the void below. Although we may never know what lies beyond, On the Threshold revivifies one’s desire to wonder. 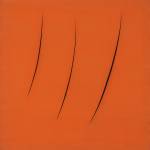 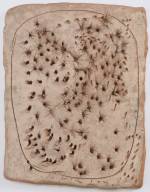 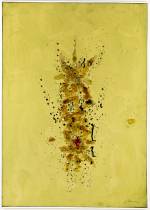