Lubaina Himid – interview: ‘It is my intention to create artworks that examine ideas about how to invent new rules by which to live’

Lubaina Himid – interview: ‘It is my intention to create artworks that examine ideas about how to invent new rules by which to live’

Lubaina Himid’s first solo exhibition in the US opens this week, debuting works that continue her longstanding project on identity, representation and survival. She talks here about this new work and her pioneering role in the 1980s in the British black arts movement

Over the course of three decades, Lubaina Himid has sought to cast a light on the consequences of colonialism through bright, graphic images that question the marginalised histories of black people. As well as relying on larger historical narratives, Himid’s sculptures, paintings and textile works are always grounded by daily life and universal experiences.

The Preston-based artist, who was born in Zanzibar in 1954, came to widespread attention in 2017 when she was awarded the prestigious Turner Prize. Himid’s win garnered particular interest, given her status as the first black woman and the oldest artist to receive the prize since its launch in 1984. 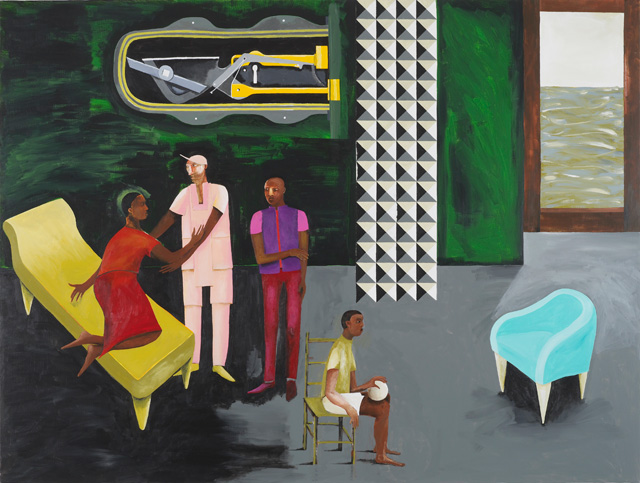 This month, Himid’s first solo exhibition in the US opens at the New Museum in New York. Lubaina Himid: Work from Underneath presents an entirely new body of work that reflects on the possibilities of survival following trauma, whether at a large-scale, community level, or on a more personal basis. Elsewhere in New York, Himid’s sculpture Five Conversations, which depicts portraits of women painted on to reclaimed wooden doors taken from Georgian townhouses, can be viewed on the city’s now landmark High Line, where it is included as part of the group display En Plein Air. Also showing concurrently at Hollybush Gardens in London (until 15 August) is a selection of Himid’s drawings produced in relation to Tailor, Striker, Singer, Dandy – a series of five painted portraits of black men, originally shown at Platt Hall costume museum in Manchester, which developed out of the artist’s encounter with West African textiles held at Manchester City Galleries. 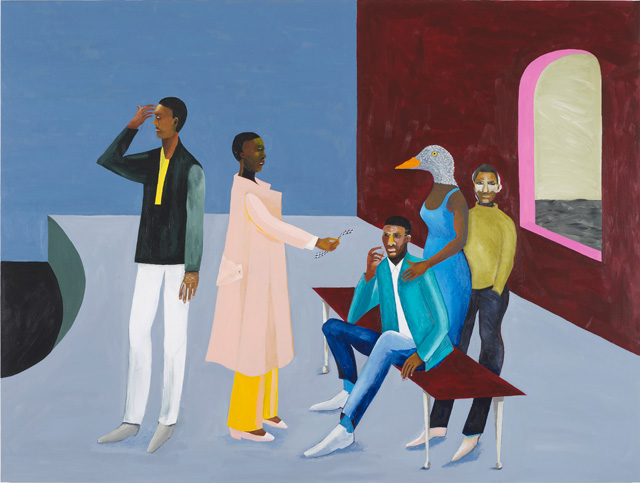 Allie Biswas: Your career as a painter began in the early 1980s, as the British black art movement emerged. How did this movement develop within the UK?

Lubaina Himid: The making of work by black artists in the UK developed amid a climate of collective creative energy on the part of a younger generation and was fuelled by our desire to connect globally and make ourselves visible. At the heart of what we were doing was, of course, the need to make new work and to share it with as many people as possible. But also running through many of the narratives was a questioning of the political system in the UK and its rigid adherence to a way of being that denied the existence of the historical and continuing contribution of black people to the wealth of the nation. The Black art movement developed across the country, but primarily in London, and towns and cities in the Midlands, such as Birmingham, Wolverhampton and Nottingham.

AB: How would you describe your goals as an artist during this period?

LH: My goals as an artist at the time were quite complex. Having trained as a theatre designer, I was less interested in making solo exhibitions of paintings and more driven to create large political installations made from found materials. I was interested in satirising British history and the dysfunctional way in which the state dealt with its colonial legacy. I made painted wooden life-sized cut-outs sometimes collaged with found materials, which leaned against the wall or occupied the space in a way that might suggest the theatre, sometimes backstage, or fully under the spotlight. 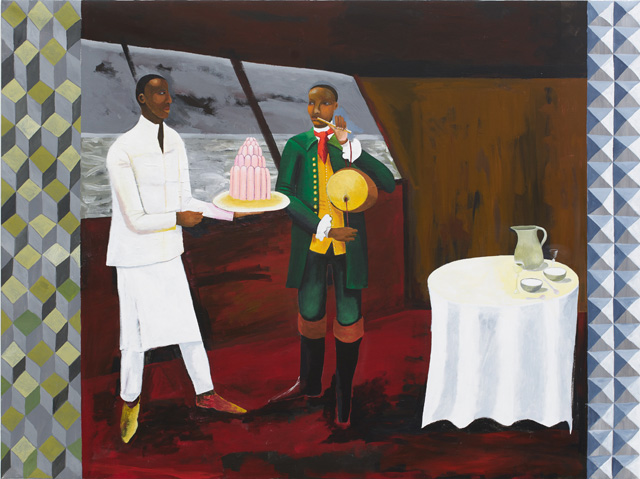 AB: You were also a prolific exhibition organiser throughout the decade, curating important shows such as Into the Open (1984).

LH: I felt that there was no point in making work unless I could exhibit alongside my fellow black artists, and we were not being offered exhibitions that focused on the dynamic conversations between the artworks themselves. This prompted me to make a series of shows in which the ideas being developed by the women practitioners could be showcased, and I hoped this would, in turn, lead to recognition and support for us all.

AB: It was within this context that you wrote your thesis On Being a Young Black Artist in Britain Today: A Political Response to a Personal Experience, for the Royal College of Art, from which you received your MA in cultural history in 1984. You researched and interviewed black artists who had been largely ignored. How did this experience inform what you wanted to achieve as an artist?

LH: I met and interviewed young artists who were just starting out and had interesting things to say about the world. They wanted to share what they had made and meet each other. At that time, it wasn’t a case of us being ignored. True, we didn’t have access to state or private funding or gallery representation or studio space. Nor were the press interested in our exhibitions in any meaningful ways. But our agenda was broader and more far-reaching than commercial success. We each wanted to say something that could make some difference to how our cultural contribution could be recognised and developed. Meeting other artists who spoke the same political language as I did gave me the energy to try to understand better how to visually communicate with audiences who encountered the exhibitions in non-traditional settings. 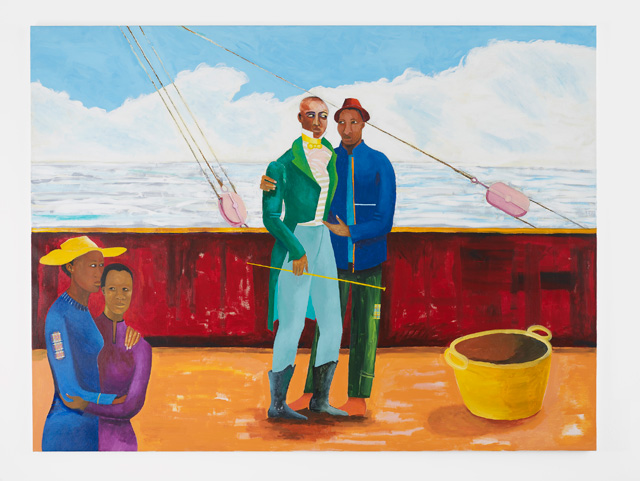 AB: You mentioned your training in theatre design, and your mother was a textile designer. What role have textiles, and materiality more widely, played for you?

LH: Textiles are the language of the everyday. We encounter pattern and weave every time we reach for and feel for something to wear in the morning, and we continue to meet its complex possibilities for communication every time we walk on a carpet, look through a curtain, pull up a blanket, tuck a baby up at night, or realise that we have fallen in love. As a young child, I learned that patterns spoke to each other and to us in their own visual language. Each pattern has a history and can be perceived differently, depending on one’s cultural relationship with it. Each pattern can be reinterpreted by simply changing its colour. The possibilities for the development of a secret, but easy-to-use language about everyday encounters, which are wrapped in the blanket of our histories, seemed endless once I had grasped that I could speak to more audiences, more often, about more issues by using the grammar and structure that pattern offers. 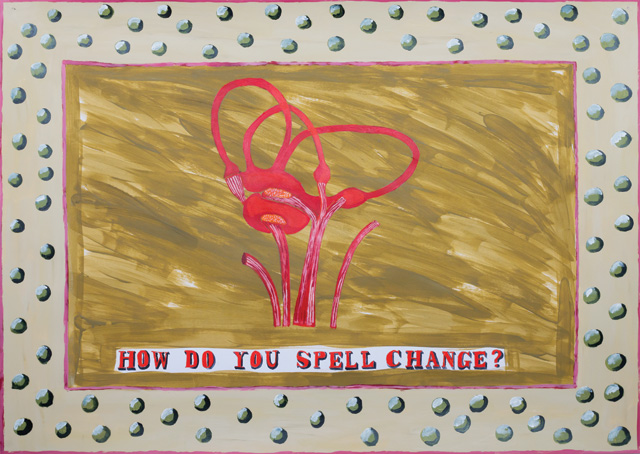 AB: You are known for describing yourself as a “political strategist”, often in place of the term “painter”. If we were to describe your project over the past four decades, your commitment to making black British people visible has become an important part of your work. Portraiture of black figures within contemporary art in the past 10 years seems ever more present. I’m thinking of Lynette Yiadom-Boakye, Amy Sherald, Njideka Akunyili Crosby and Jordan Casteel, to name just a few. Do you think there is still a need to approach the black subject as part of invisible or marginalised histories, or has the political incentive changed from when you were making art at the start of your career?

LH: Hopefully, I was always doing more than making us, as black people, more visible. It was, and still is, my intention to create artworks and exhibitions that speak about power and love and which examine ideas about how best to keep safe, take risks and invent new rules by which to live. I look at language and try to use it in new ways, pushing the limits of how to express the extraordinariness of the everyday. In my paintings, I have tried to speak about political strategy and everyday planning, necessary secrets and unnecessary lies, the fine line between safety and danger, and the painful experience of love and loss. Artists must be enabled and encouraged to make whatever they want and must never be told by others that the need for this or that remains or has expired; how can anyone but the artist know how we as individual makers experience the world in which we function. 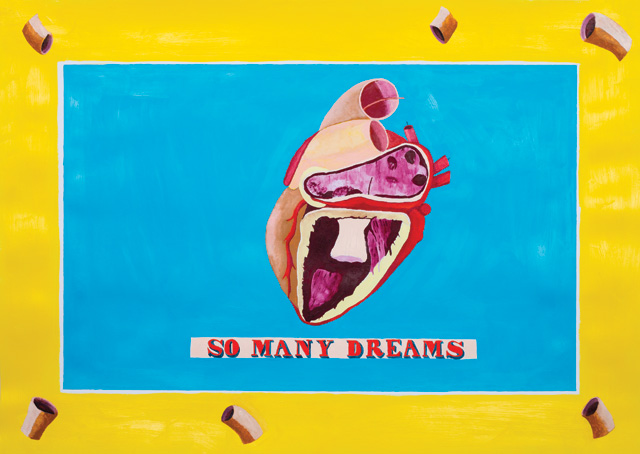 AB: What about your own place within the history of British painting? I am curious about your interest in 18th- and 19th-century artists, such as William Hogarth, James Gillray and George Cruikshank. What has drawn you to satire and caricature, as seen through these painters?

LH: Hogarth, Gillray and Cruikshank, all of whom felt free to ridicule and moralise about a whole range of people, from the urban and rural poor through to the merchant classes and the British aristocracy, inadvertently helped me to understand how the political and cultural structures I grew up with in late-20th-century Britain were formed. These artists made it easier for me to visually tackle the impossible task of taking apart old ways of holding on to power, and new ways of gathering audiences into debates about who could be in control.

AB: Work from Underneath features an entirely new body of work. It is also your first solo museum exhibition in the US. How did you think about presenting yourself (to an American audience) on this momentous occasion? The press release mentions the role of language and architecture in the formation of feelings of safety and danger. Could you elaborate on this?

LH: The new work is an invitation to see whether it is possible to emerge from trauma; physical, historical and/or personal, and still have a strategy for survival. The work offers, first, an uneasy acknowledgment that history is ever present – in the walls, in the very structures of even new buildings. One only has to scrape a thin layer away to find evidence of past wrongdoings. Gradually, opportunities emerge to follow ambiguous rules and instructions that seem to have many layers of interpretation and that are, at one and the same time, serious and silly. Eventually, as you look around and listen, you can watch other people working together to make clothes and buildings. These works about “human housings” try to suggest that the act of making, or even a collective thinking about making, can in some way provide some resolution. There are chances to feel in touch with the way in which you are both inside the museum building and inside the history of your being there. Having understood that audiences enter the viewing space carrying their own narratives, which give an energy and heat to my work, I try also to offer here some space to feel and think, and then a few ways to leave the exhibition with some small solutions to reach another stage.

• Lubaina Himid: Work from Underneath is at the New Museum, New York, until 6 October 2019. 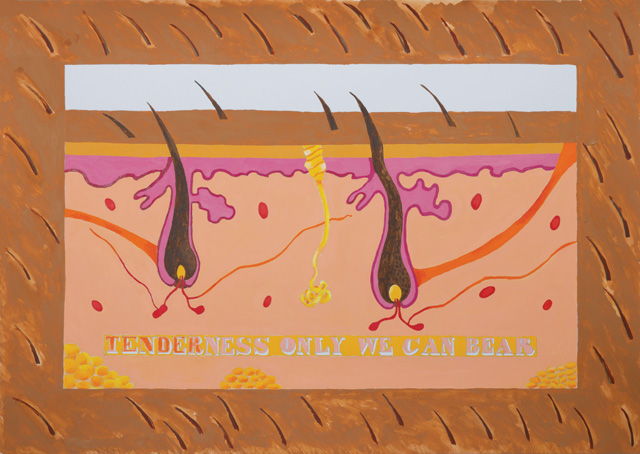 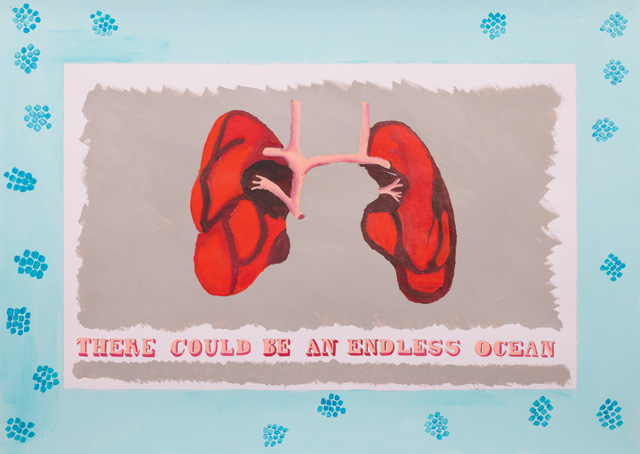 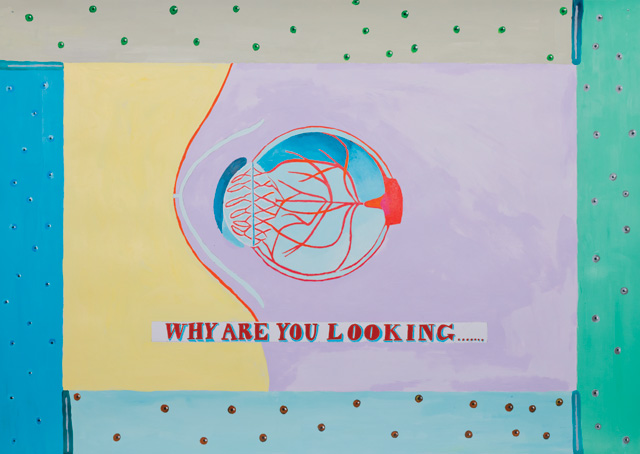 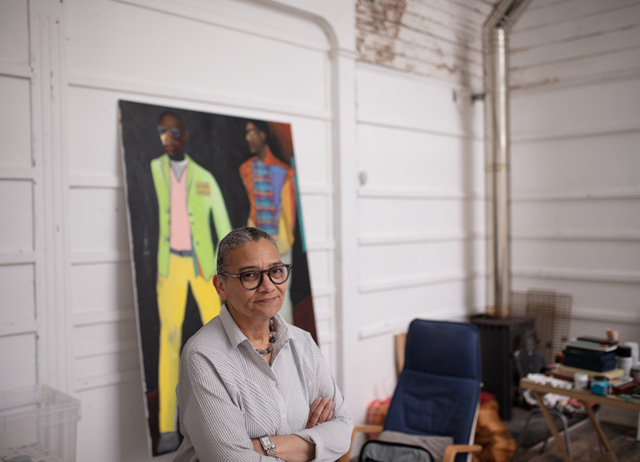