MoMA’s expertly curated exhibition of Bourgeois’ prints rescue the artist from her legend, revealing her drawings to have incubated, formulated and unleashed the emotions that would be entrapped in the fame of her sculpture 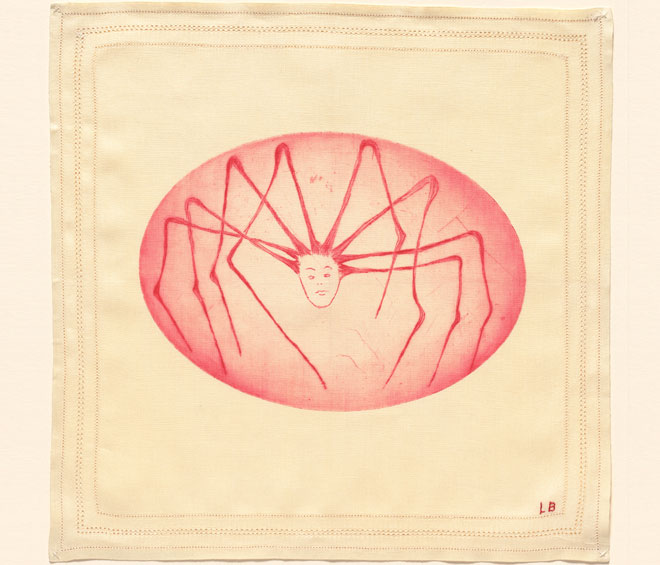 Where have I been? Not on an island. I have bumped up against the roar of this artist since the 1970s in every variant on art shows – group, museum and solo – and exited ticking off all the set boxes; burdened, crazed, aggressive, monstrous, aggrieved, fraught. How, then, had I not seen the glory? Too little exposure to the drawings, it turns out. Gorgeous was the last word that had come to my mind in connection with the work of Louise Bourgeois (1911-2010), but this dazzling show has reversed that. My first full-on encounter with her investigations on paper (I had missed MoMA’s breakout 1994 print survey) has voided the cliches miring her sculpture in rabid feminism, unyielding anger and neurotic probings of trauma, which, stemming from her father seducing her tutor, had seemed so much lesser than the abuses of rape, starvation and slaughter raging around us. These 266 prints, expertly curated by Deborah Wye from a trove of 1,200, by their vigour, breadth and intuitive gesture, release Bourgeois from her legend. 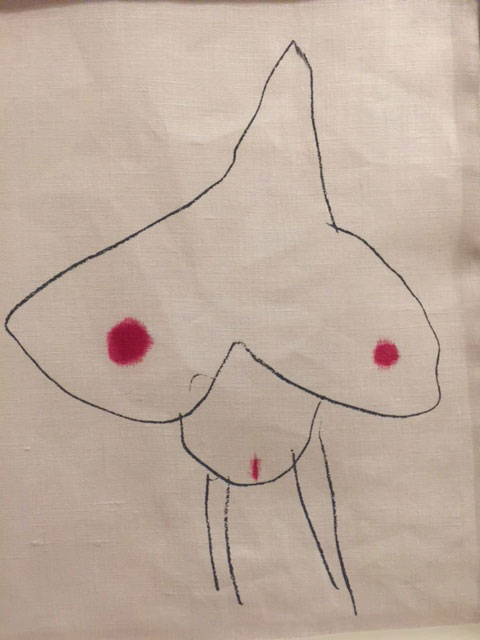 Louise Bourgeois. From the series The Fragile, 2007. Photograph: Jill Spalding

The show opens with The Fragile (2007), 36 freewheeling doodles digitally printed on cloth, of which each print of each of the seven editions was hand-activated by the artist with a blue or red dye to foreground the featured (nipple, genital, aural) concern. Organised thematically, the prints move you through expressive visualisations of familiar Bourgeois signage: hair and breasts (how she loved hers!); tendrils and roots (nature served as her private religion); spirals (her search for a centre); and family (love, hate, complicated.) A culmination of sorts, the series of seven drypoints from Ode à Ma Mère (1995) floats fantasies surrounding pregnancy, birth, lactation and predation whose emotional intensity has eluded the best of her imitators. 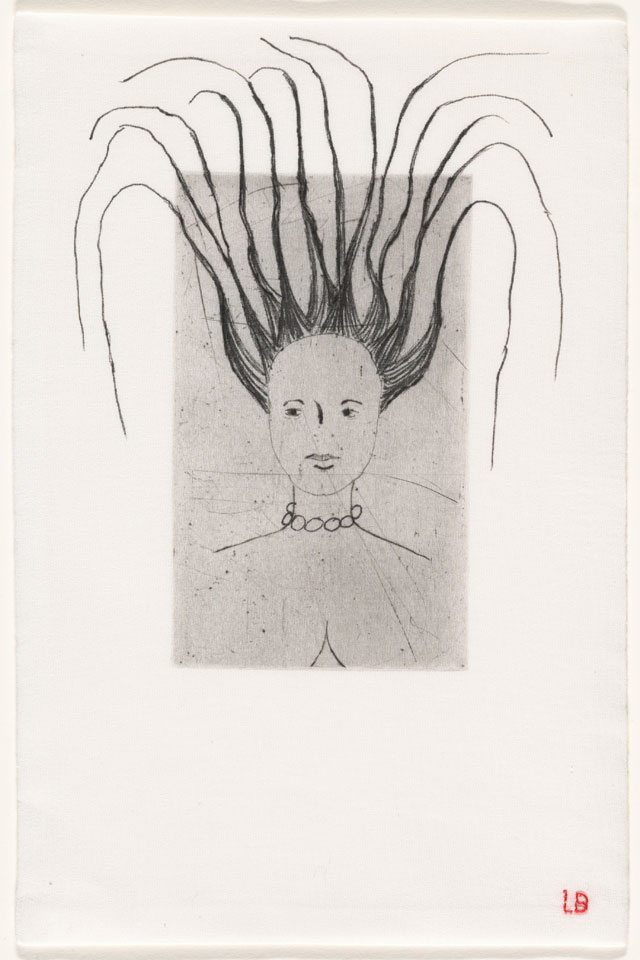 Tellingly, the 23 sculptures interjected among them serve to enhance the narrative, not dominate it. Although in the first section, Architecture Embodied, the artist’s fear of entrapment is introduced with two sculptures, it is the Femme Maison drawings that nail it. It is only after experiencing the pen and gouache intimacy of organic forms weighted by tight architectural geometries that you fully understand how Bourgeois, by exchanging base with top, gave the sculptures the same metaphor for oppression. It is only after you have absorbed the repetitively drawn/redrawn inflamed labia and alert/inert lingams that their bronze counterparts emanate the same charged sexuality. Only after you follow the inked and etched reiterations of family embroilments that the clustered sculptures project their grouped menace. There is this, too; a good many of the drawings constitute art pure and simple – given a break from acting out psychological dysfunction, they are beautiful. Understanding beauty to obviate the artist’s own allusions of therapy, I suspect curatorial collusion in the selection of Bourgeois’s pastel, almost pretty, Cell VI (1991) to represent one of the otherwise discomforting Cell installations. 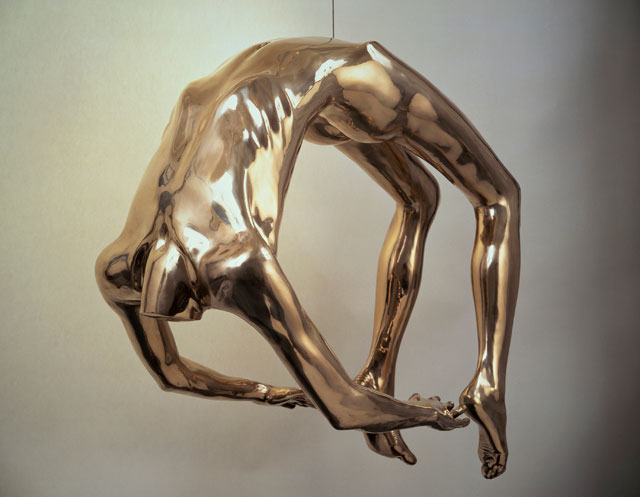 That Bourgeois learned how to work raw emotion directly into her sculpture (Arch of Hysteria, 1992, is a tour de force of bronze angst etched in air) only reinforces the primal pulse of her drawing. It is the drawings not the sculpture that tell us that gesture was all. Those sweeping lines, those swaths of paint (that rain of hair, those branching arms!) reveal Bourgeois to have been a performance artist at her core, her work to have been a construct of her self, and her self to have been the metaphor for her life. At that core was the fertile female sui generis, proportioned to purpose either as a runway model or the Venus of Willendorf. Fertility manifested variously as brimming with eggs (embryo), tangled in vines (umbilical cord) or burdened with packages (childcare). Heterosexuality muscles in with a confrontation of organs that shuffle the dominance between male and female to create expectations that on paper, for all their impendence, read more as fervid than dangerous. First appearing in 1947, drawings of the famous spider splayed its eight probes into the body fluids/organs/limbs of every facet of young motherhood until bio-morphing into the gigantic fame-sealing bronze and steel entrapments of matriarchy gone rogue. 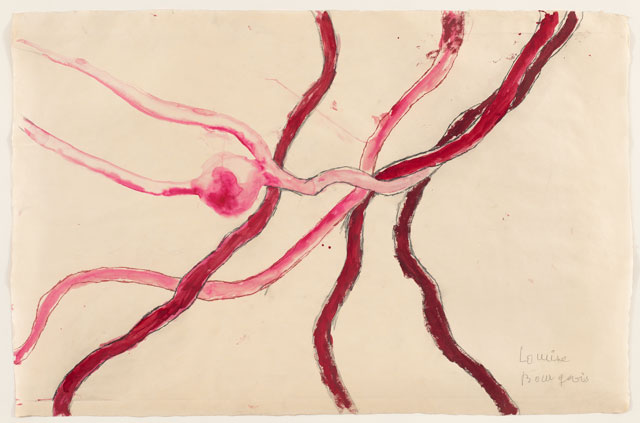 Colour mattered to Bourgeois. Wielded like banners on a field bloodied by battle, the reds soar above language to convey voiceless messages of pain; reduced to pastels, they drain the arteries of the corseted forms that entrapped her; patterned, they elaborate new meanings from chaos; sectioned into tight geometrics, they point and counterpoint closely processed streams of consciousness.

No materials eluded her – fabric, fibreglass and plaster took their turns, not progressively or sequentially, but according to whichever best suited the meaning. Among the first to embrace latex and resin, Bourgeois as readily mined metal and marble for new possibilities, and never abandoned wood. 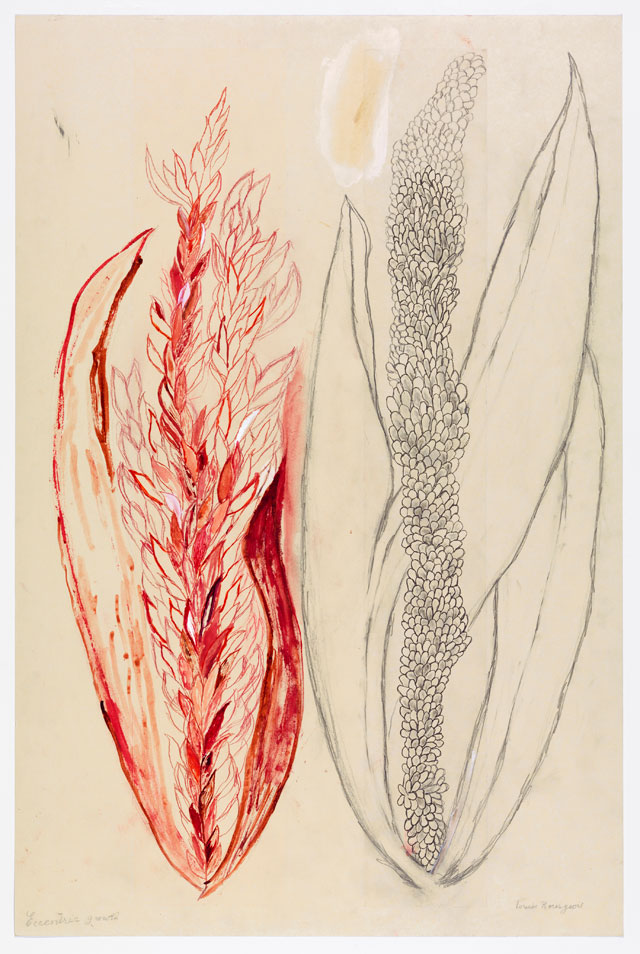 Words, too, served as material. A standout series, calling on geometry as a foil (Bourgeois had been a mathematics student in Paris), the puritan (1990) juxtaposes eight gridded engravings with strangely moving vignettes that build to a semi-climax of revelation, then trail off to the mystery of runes. Rare as it is for the selfie generation to not snap and move on, the young viewers around me were leaning in, holding their mobile phones behind them, to ponder each line. Some backtracked in the effort to link works from a same year, and many questioned the titles, believing them key to the work’s reading and significance.

That the titles verge on the elaborate begs attention. Difficult Steering (1946-47), He Disappeared into Complete Silence (1947) and The Sky’s the Limit (1989-2003) ring out like clarion calls of the unconscious mind. Decoy or just coy? Shorthand or code? Whichever and regardless, this show teaches that for Bourgeois, as with the pink, bandaged self-portrait that she wrapped in an agony of fabric, Untitled can be yet more freighted with meaning. Less binding, too. The drawings that came so fast and furiously at the end of her life show the artist to be irretrievably pregnant – with ideas, narratives and impulses, both crafted and instinctual, that outperform titles, or any other label.

Bourgeois did not spring from whole cloth, of course (she studied with Fernand Léger, was a docent at the Louvre, spent time in Moscow, and on), and the influence of her mentors and the artists she rubbed up against is palpable here. The voluptuous homage À Baudelaire (2008) is as much a nod to Georgia O’Keeffe; Just Like Me (2007) riffs on the dadaist corps exquis. What makes them uniquely hers is the filter they passed through; the panic of a childhood trapped in abuse; the guilt of an upstairs-downstairs housewife-artist as anxious to turn out the perfect roast for her sons as to get down to the plaster in her studio below; the ambiguity of a hostess entertaining a haloed intelligentsia who was first savaged, then immortalised by the dybbuk that invaded her body and ultimately her materials.

Thanks to skilled publishers, the original techniques bleed through; from the 2008 series, To Infinity, “softground etching, selective wiping, watercolour, gouache, pencil, coloured pencil, and watercolour with wash additions” – all in one drawing – it makes your head spin. Astounding, too, how their close collaboration achieved as clear and vibrant an image on paper sized to a drawing pad as on that approximating a blackboard. 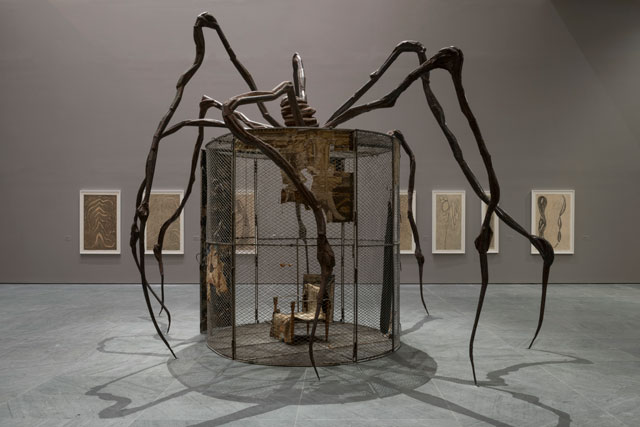 Save the large works on the first floor for last. They are fluid and masterful. Anchored at the centre by one of the artist’s famed giant arachnids (this one hatching a prison in the guise of a house) the prints rise like creatures of Loch Ness, their verticality a manifesto of sorts; “verticality,” Bourgeois once said, “is the move from the passive (fear and violence) “to the active.” Soaring and invulnerable, they are quite capable, you now know, of devouring the spider.

It is not expected of a gorgeous show to double as a teaching moment, but, by turning the Bourgeois-defining sculpture queen inside out, this one does. Her ceaselessly morphing technique and her antagonistic/cooperative alliterations of breasts and gonads to illustrate that male matters prove the taglines of surrealist and feminist, in the first instance, skewed, and in the second, entirely wrong. Those adulterated forms surely followed from a need, not a movement (certainly not that of the surrealists, all of whom she dismissed, just as they had ignored her.) And feminism served Bourgeois less as philosophy than strategy – the death of her husband of 40 years almost undid her; her sons, far from castrated or discarded, became professionals of consequence; and she didn’t destroy her feckless father, she just outlived him. 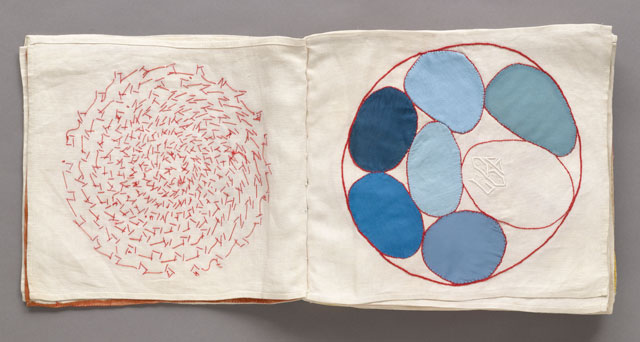 Outlived, with this storied artist, is an operative word. Bourgeois outlived abstraction, minimalism, conceptualism and nihilism. She influenced more art than can be contained in one museum. And she grew old enough to translate her fears into demands. “Iron my morning newspaper,” she ordered her staff. “Line my paisley shawls with fur for a robe I can work in,” she instructed the fashion designer Arnold Scaasi. In the last frame of a video filming her turning the pages of the fabric book, Ode à l’Oubli, her finger points triumphantly to her name. Bourgeois seems to have mastered even her famous neurosis. Although she never fully resolved the anxieties expressed in mouths opened to horror and genitals exposed to violation, works such as her 1990 etched self-portrait and the carefully plotted geometries of the 2002 prints on fabric reach for harmony, both of line and of mind. Despite the passionate efforts of then MoMA curator Robert Storr (whose essential talk about her life and work is available on the Hammer Museum website), what Bourgeois did not outlive was a reputation trapped in amber. This survey of works on paper, curated as radical performance, corrects that, freeing the artist in ways not anticipated. The spider, cast in bronze, trapped the artist in her fame: played out in the drawings it banished the demons. Gestural, original, daring and beautiful, these prints present as ultimately radical in that they rescue Bourgeois from her brand. 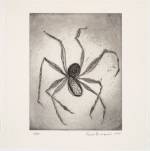 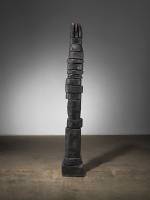 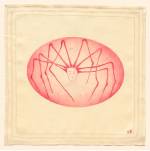 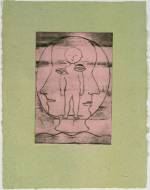 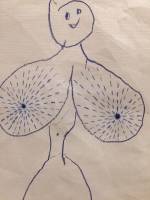 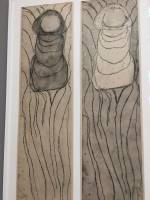