Featuring 46 artists, this long-overdue examination of the complex interrelationship between the Caribbean and Britain tackles the nature of identity, belonging and what it means to be caught between cultures 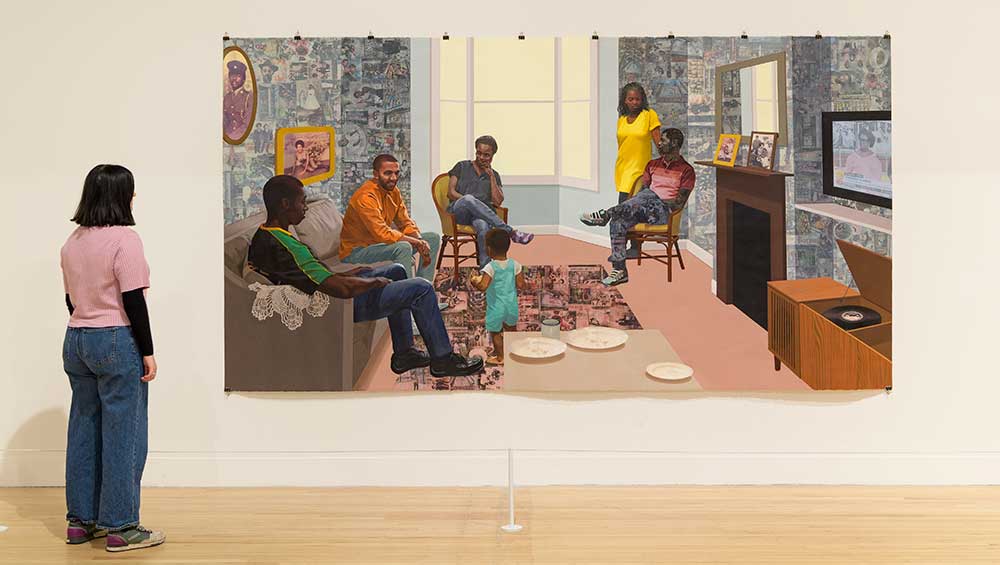 Between 1948 and 1971, several hundred thousand people migrated from the Caribbean to Britain to help rebuild the nation after the second world war. The arts and culture they brought with them transformed their new home, though many experienced intolerance and marginalisation. Spanning seven decades and featuring 46 artists, Life Between Islands is a long-overdue examination of the complex interrelationship between the Caribbean and Britain, tracing the artistic legacy of the Windrush generation, their descendants and others who have found inspiration in the region. It is an exhibition of arrivals, departures, protests, struggles, celebrations and, above all, resilience. Brimming with painting, sculpture, photography, installation and moving-image works, the show is uplifting and inspiring, but also disheartening and deeply moving. At its heart are complex questions about identity, belonging and what it means to be caught between cultures.

The first wave of artists arrived from the Caribbean in the late 1940s, including the painter Aubrey Williams, who was born in British Guiana (now Guyana). A selection of his earthy abstracts inspired by the symbolism of indigenous Guyanese peoples opens the show, including the fiery El Dorado (1960), which references the Spanish colonisation of the Americas. 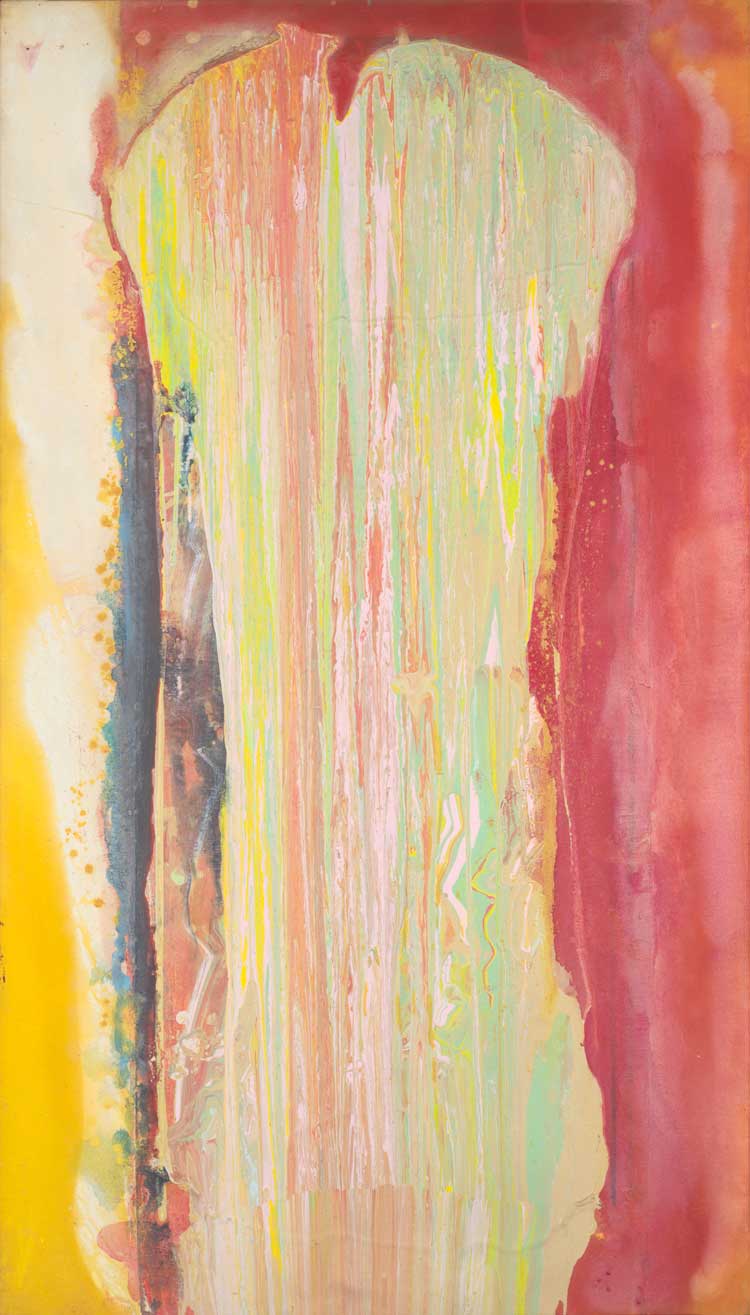 Another Guyana-born painter is Frank Bowling, whose sumptuous canvases nod to American colour field painting, but smuggle in references to colonialism with faintly outlined continents: Who’s Afraid of Barney Newman (1968), for example, hides maps of South America and Guyana beneath vibrant green, yellow and red stripes. Elsewhere, the geometric minimalism of Donald Locke’s black-on-black canvas Dageraad From the Air (1978-9) appears wholly abstract, but is derived from the gridded fields of the titular Guyana sugar plantation, where people and land were reduced to expendable commodities in the 18th-century. 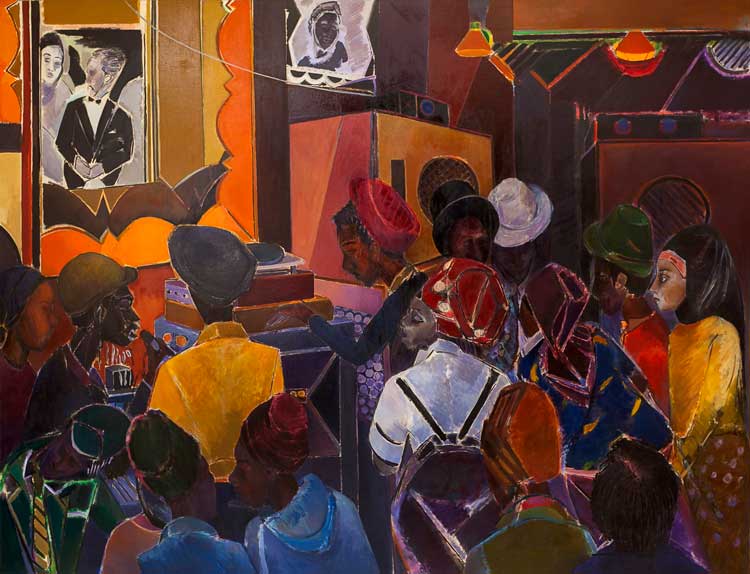 Caribbean contributions to popular music in Britain have, of course, been significant and several works dwell on this aspect of black British culture. Paul Dash played piano in his family band, the Carib Six. Capturing the dynamic view from the stage, his impressionistic painting Dance at Reading Town Hall (1965) shows a lively crowd throwing shapes on the dance floor. There is something in his figures that foreshadows Denzil Forrester’s depictions of London’s dub reggae scene 20 years later. The music may have evolved, but the energy is the same. Forrester’s large 1983 canvas of the legendary sound system operator Jah Shaka is echoed elsewhere in Vanley Burke’s black-and-white photograph of the Wassifa Sound System performing in Birmingham’s Handsworth Park in the same year.

Tate’s promo video for Life Between Islands features Tannoi’s 1985 single Worries and Troubles, an upbeat slice of dancehall reggae. That tune, and others like it, would have provided a welcome soundtrack to the opening sections of the show, which are instead haunted by the disturbingly ghostly sounds of Keith Piper’s Trade Winds (1992), a powerful video installation concerned with the legacies of colonial history and transatlantic slavery. Yet Tannoi’s lyrics are similarly haunted by this history and, as with so many of the artworks here, remind us of the prejudice and injustices that black communities have experienced for decades. 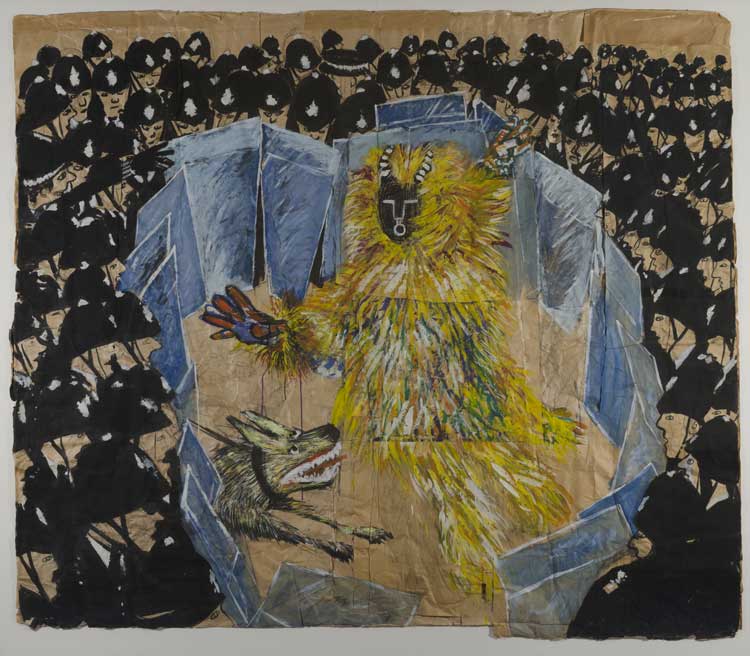 Caribbean rhythms are a staple of Notting Hill carnival, which was founded in 1959 in response to the local race riots of the previous year. The racial tensions that plagued the carnival in the 80s are the subject of Isaac Julien’s fragmented audio-visual collage Territories (1984). Juxtaposing scenes of heavy-handed policing with reggae sound systems, the film documents the strife between white authority and black youth, underscoring carnival’s status as a radical display of defiance. The theme is picked up nearby in Tam Joseph’s striking painting Spirit of the Carnival (c1982), which shows a hostile crowd of police officers barricading an ethereal golden figure, a masquerader emblematic of black cultural resistance. 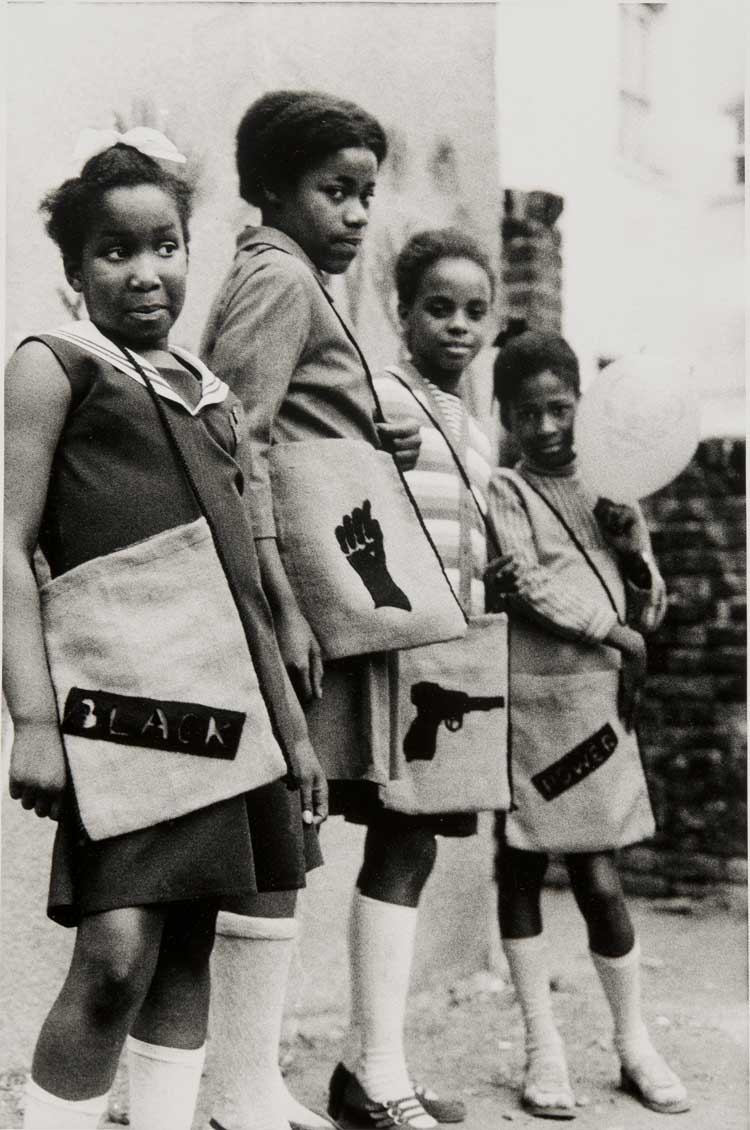 The British police do not fare well in this show. “All police are pigs,” reads one placard in Neil Kenlock’s 1972 photograph of a Black Power demonstration. In Forrester’s ominous Death Walk (1983), the painter shows his family friend, Winston Rose, being dragged through the streets by uniformed officers, just hours before his “unlawful killing” in police custody in 1981. Nearby, Barbara Walker’s tender portraits of her son, My Song (2006), are drawn on to copies of the police forms he received each time he was stopped and searched in Birmingham, a recurring experience that began when he was a teenager, as it did for many who have been the target of racial profiling. 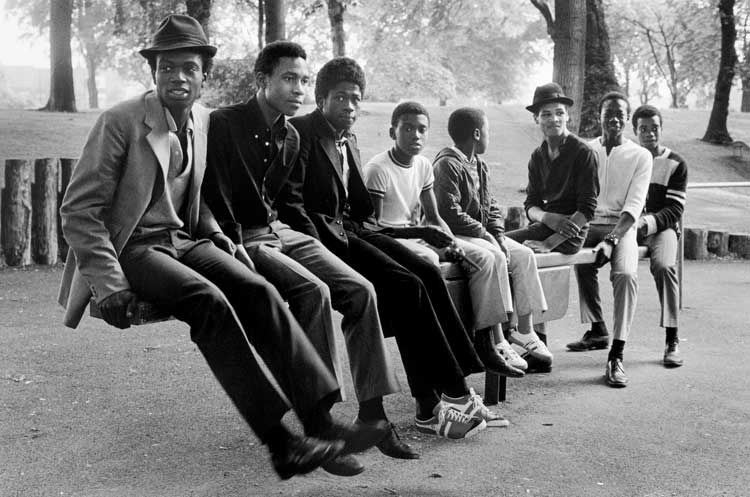 Tensions between the police and local ethnic communities in Birmingham were a significant factor in the 1985 Handsworth riots, which saw a trail of damage and destruction and the loss of at least two lives. Pogus Caesar was one photographer who documented the carnage, as was Burke, whose body of work reflects his broad aim of recording black people’s experiences, from birth to death and everything in between. A particularly poignant image from 1984 shows a group of young black men balancing on a seesaw in Handsworth Park. Neither up nor down, they metaphorically hover between cultures; a state of equilibrium reflecting their uncertain status within British society.

Many works here focus on the Caribbean itself, and specifically the complex new identities and cultural forms that have emerged from the mixing of peoples and cultures. Referred to as “creolisation”, this mixing is at the heart of carnival. The rich blue hues of Chris Ofili’s Blue Devils (2014) hide fugitive carnival characters in reference to the Trinidadians who paint their bodies blue. Vivid blue also covers the bodies of the seductive women in Lisa Brice’s vivid large-scale paintings of roadside bars in Port of Spain in Trinidad. The Caribbean as a contradictory place filled with beauty yet tainted by colonial history and economic problems is addressed in Hurvin Anderson’s majestic painting of an abandoned hotel, Hawksbill Bay (2020). Similar ideas are found in Blue Curry’s sculpture Sun Chasers (2020), which incorporates garish airline seats adorned with braided hair, seashells and sand to critique the cliche of the Caribbean as a site solely for leisure and consumption.

At times, the definition of Caribbean-British art becomes quite elastic, which leads to some unexpected inclusions. One surprise is Peter Doig, a British artist working in Trinidad whose monumental canvases are juxtaposed with the quiet poems of Derek Walcott, written in response to his paintings. Another is Njideka Akunyili Crosby, a Los Angeles-based Nigerian artist, whose large-scale, densely layered mixed media painting Remain, Thriving (2018) depicts an informal family gathering of grandchildren and great-grandchildren of the Windrush generation in a Brixton home. A television in the corner references the Windrush scandal, which to date has resulted in the wrongful deportation of 83 Caribbean-British people who first came to Britain as children.

As Tate acknowledges in the exhibition guide, recent events such as the Windrush scandal and Black Lives Matter have challenged the institution to rethink the stories it tells and the communities it represents. For years, Tate Britain has been complicit in marginalising many of the artists in this show and is, of course, named after a sugar merchant who made his fortune in an industry built on the labour of enslaved Africans and their descendants in the Caribbean. This is why Life Between Islands feels so urgent and necessary. It is a remarkable step forward. The words of photographer Charlie Phillips, quoted in a wall text, are germane: “It’s not black history; this is British history, whether you like it or not.” 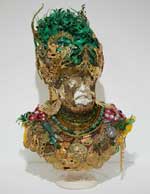 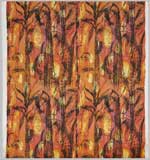