Bruegel to Freud: Prints from the Courtauld Gallery

Bruegel to Freud: Prints from the Courtauld Gallery

I met Dr Rachel Sloan, curator of Bruegel to Freud, to discuss the Courtauld’s print collection and how she assembled this year’s summer showcase of 30 key pieces with more than 24,000 to choose from.

This is the first major display of prints at the Courtauld from its own collection, comprising 30 examples that span 500 years of printmaking. The result is a whistlestop tour of some of the greatest names in art history. So how did Sloan decide which prints to include?

“Choosing them, of course, was not an easy task, but I was guided by several principles. One was that I wanted to represent the whole chronological span of the collection, the 15th century to the 21st, and I wanted to show off some of the collection’s greatest strengths.”

There are some stunning early examples. A small and impossibly fine 16th-century engraving by Hendrik Goltzius demonstrates immense skill. It is inspired by Michelangelo’s Pietà, but is very clearly influenced by Albrecht Dürer’s style, down to the monogrammed initials. The finely engraved lines are almost microscopic.

Etching, however, dominates the collection, partly because the process allows for more freedom. The act of scraping a design into a wax coating on a copper plate most closely imitates drawing without the need for the laborious and specialised techniques of engraving or woodcutting. Sloan takes me to her favourite piece, a neat little Canaletto. Portico with Lantern (c1741-44) depicts a rundown part of Venice. The classical architecture is turning to ruins; a triumphal arch appears half-buried in the waterside sludge. Canaletto was a self-taught etcher who came to printmaking in the middle of his career. Before that time, his income had depended on aristocratic tourists passing through Venice on the virtually mandatory Grand Tour. His paintings were sought-after mementos, idealised snapshots that proved to benefactors at home that the young travellers had taken in the sights and advanced their cultural education. However, in the 1730s and early 1740s, the tourist industry slowed and the market dried up due to conflict in Europe.

“He had to find a way to make up for his lost income, and prints, obviously being multiple images, meant that he could sell the same set over and over again,” explains Sloan. Printing has long been a lucrative fall-back for artists, as prints are more affordable and thus easier to sell. In his etchings, as with his paintings, Canaletto produced composites, also known as capriccio or caprices, to produce the most attractive image. “I don’t think it’s a coincidence that capriccios feel much more mysterious, much more enigmatic than so-called real views of Venice.”

For all the beauty of Canaletto’s half-imagined view of Venice, the atmosphere of Piranesi’s fabricated prison scape or the cutting satire of Hogarth’s courting couple, also included here, I find myself drawn to the 19th- and 20th-century pieces and their bold, inventive approach to printing. There are some beautiful examples; a tender self-portrait of Berthe Morisot and her daughter, the Japanese-inspired work of Pierre Bonnard, Oskar Kokoschka’s coloured lithographs of awkward adolescents. One thing is clear in these later examples; the image of the woman dominates. A wall of female nudes includes works by Manet, Picasso, Matisse and Gauguin. No stranger to the chisel, Gauguin played with the possibilities of woodcut printing. Auti Te Pape, part of the Noa Noa series (1893-94), is the product of his first trip to Tahiti and depicts a woman sitting on a riverbank in typically dreamlike surroundings. He not only cut into the woodblock, but also gouged patterns to give the sense of a pebbled riverbank and used razors and sandpaper to roughen the wood’s surface, in short, treating it like a low-relief sculpture. The resultant print is rich in subtle tones not normally associated with this method of printing. The ink-stained printing block, if it still survives, must surely be a work of art in its own right.

Blond Girl (1985), by Lucian Freud, takes centre stage among the nudes. Freud’s technique, not unlike Gauguin’s, was a little unusual. “He didn’t make any preparatory drawings. He just put the plate on the easel and drew directly onto it,” Sloan tells me. For Freud, it would seem, etching was an extension of his drawing practice – a product of direct observation, full of energy and spontaneity. And Freud hasn’t completely erased his mistakes. Faint lines remain where the position of the girl’s arm has changed.

The showcase enters the 21st century with an abstract etching by Chris Ofili. Ofili travelled to Barcelona, Berlin, New York and North Wales to create etchings of the recurring patterns he found there, in what he called “an odd sort of tourism”. The example on display is inspired by the Welsh village of Penrhyndeudraeth. The complex spidery pattern seems to oscillate on the page. We speculate about what inspired the design – fabrics perhaps, or rock formations. Sloan thinks it could derive from some sort of moss or lichen. “What I really like about this,” she says, “is that it’s not only beautiful in itself, but it shows a completely different side to [Ofili] as an artist. It’s different from his enormous vibrant paintings. It’s much quieter.”

Ofili’s work provides a bridge to the adjoining rooms where a complementary display explores modern printmaking and its boundaries. It is a response to Sloan’s exhibition, curated by students of the Courtauld’s MA curating programme. Entitled Impress, it investigates surface and the notion of pressure, or of making an imprint – print-making in its broadest terms. Examples range from the marks left on buttocks from a cane chair to a rotating blade that simultaneously creates and erases grooves in a tray of sand. All in all, an ingenious take on the notion of printing that looks to the future of this enduring practice. 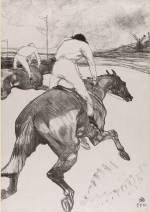 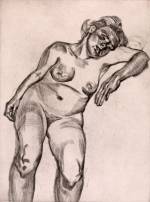