Paul Gauguin shaped a mythology that lasted; a persona deliberately crafted yet wildly varied. The family man, the financially and physically suffering artist, the (self-)exiled savage, inventor of a new style in painting by way of the exotic, observer of other cultures and deplorer of his own – a set of collected and curated existences that far outlasted the man himself. For the curators of Tate Modern’s highly anticipated retrospective Gauguin: Maker of Myth, these multiple Gauguins form a conceptual key to his practice, one which maps Gauguin's self-mythologising tendencies back on to his diverse oeuvre. If Gauguin could narrate his life in many ways to many people, his art must likewise contain a wealth of stories and beliefs, of possible worlds, that allow Gauguin’s work to be radically reconsidered.

As well as a new approach to Gauguin’s paintings, the focus on narrative in Gauguin: Maker of Myth provides a much-needed reconsideration of his work outside of the history of modernism. The first major Gauguin exhibition to be held in London since 1966,1 Gauguin: Maker of Myth attempts to rectify a historiographical bias that has cast Gauguin, from the generation of Roger Fry onwards, as a quintessentially modernist artist.2 Gauguin’s love-hate relationship with what is now regarded as mainstream modernism – his exhibitions with the Impressionists, his friendships with post-Impressionist painters Vincent Van Gogh and Emile Bernard, his romantic personality as well as his love of primitive forms which went on to influence Picasso’s generation – has only reinforced this bias. Yet Gauguin’s preference for a vibrant palette and simplified figures was driven not by an overall formalist mission, but by a love of the primitive grounded in admiration for the cultural life of Brittany and the islands of Tahiti and the Marquesas where he spent much of his career. Gauguin stated that in his work he aimed to achieve a “complication of the idea through a simplification of form”, yet modernist critics and scholars have prioritised his “form” at the expense of his “idea”.3 Perceived outside of the rigid confines of modernist formalism, however, Gauguin’s fascination for the narrative and symbolic as well as the aesthetic possibilities of the so-called “savage” races he encountered emerges more fully. This exhibition explores the ways in which Gauguin’s letters, writings, painting titles and biographical details, combined with the formal properties of his art, can be used to expose the nature and extent of his artistic myth-making.

Born in 1848, Gauguin travelled the world from a young age as an officer of the merchant navy. He returned to Paris in 1871 and began painting while working as a stockbroker. Following the crash of the Parisian stock market in 1882, he took the opportunity to abandon high finance in order to devote his life to painting. By 1888 Gauguin had rejected Impressionism in favour of a colourful, heavily stylised approach to painting that was a direct response to his main inspiration at the time: traditional Breton country-dwellers, whose culture was rapidly fading in an era of industrialisation and mass-migration. Inspired by the pictorial and poetic possibilities offered by these “primitive” cultures, Gauguin took his first trip to the South Seas in 1891, and his paintings of this time, such as Mahana no Atua (Day of God) (1894), convey both the cultural richness and the idyllic serenity that Gauguin had been hoping to find there. It was an approach to painting that he would pursue around the world for the remainder of his life. Separated from his family indefinitely, and returning only intermittently to Paris to sell work or when in poverty, Gauguin lived on Tahiti in 1891–93 and 1895–1901 and on Hiva-Oa from 1901 to his death in 1903.

These periods of activity form clear divisions in Gauguin’s oeuvre, and their impact on the artist’s self-perception is made clear in the display of self-portraits that open the exhibition. A portrait of 1888–89 shows Gauguin in a traditional pose, rendered in the relatively muted tones and small brushstrokes that still bear the influence of Impressionism and correspond to Gauguin’s early work in the villages of rural Brittany. Painted not long after, however, Self Portrait (1889) is a more abstract, colourful piece: the floating head of a confident Gauguin regards us warily from over an invisible shoulder; a cigarette in the shape of a snake is brandished from a demure hand; a thin golden halo hovers in the red abyss above Gauguin’s head. Gauguin’s wary expression, as well as his use of block colours, emerges again in Self-portrait with Manao tupapau (1893–94). Painted at the end of the artist’s first trip to Tahiti, this painting cements Gauguin’s new sense of himself and his art – both were changed unalterably by the experiences on Tahiti that led him to paint work of such intense narrative power as his famous Manao tupapau (1892).

Despite the clear temporal, geographical and stylistic divisions in Gauguin’s artistic career that are formed by his trips abroad, Gauguin: Maker of Myth does not takes these as its organisational cue. Instead the works are displayed thematically, implying that narrative strategies dominated Gauguin’s work throughout his career and thus strengthening the case for narrative as an inherent quality of his painting. Though the themes are in many cases loosely defined, groupings such as Landscape and Rural Narrative reveal the contrasting ways in which Gauguin’s storytelling emerges; they allow us to compare the rural idealism and narrative simplicity of Breton Girls Dancing, Pont-Aven (1888) with the more staged and sinister relationship between the young woman and the fox in the darkened landscape of The Loss of Virginity (1890–91). Making the Familiar Strange is a space devoted to Gauguin’s still life paintings, which in many cases are displayed alongside the physical objects that they depict. Several of these paintings include figures as well as objects: Still Life with Profile of Laval (1886) features the face of Gauguin’s friend Charles Laval’s emerging at the right. The effect is that of the two-dimensional interrupted by the three-dimensional: physical movement and human drama permeating the static muteness of the traditional still life.

The thematic grouping focusing on Sacred Themes most clearly demonstrates the relationship between Gauguin’s personal myth-making and those he creates in his painting via colour and form. The stunning Christ in the Garden of Olives (1889) shows Christ, clearly a portrait of the artist, contemplating death, his glowing orange hair offset by the murky black and blue background from which his betrayers advance. In Vision of the Sermon (1888), nuns in fervent prayer and black and white dress are confronted by the distorted, intensely coloured vision of Jacob fighting with the angel. Here abstraction itself plays a narrative function – combined with a saturated red background, the twisted figures of Jacob and the angel seem to be a projection of the nuns' collective imagination.

But while Christian imagery abounds in Gauguin’s work, he sought the theological intricacies of other world religions to add to the mix. Even when his hopes of finding mysterious ancient religious traditions in places such as Tahiti led to disappointment (Tahiti had been Catholic since it was colonised by the French in 1843), Gauguin would not permit his idealised vision of the island to be spoilt. He read about Tahitian religious traditions and featured their gods in many of his paintings, as well as those he invented, such as the femme fatale Oviri (meaning “savage”). It was this openness to spirituality in general that led Gauguin to make a series of ten woodcuts for a book entitled Noa Noa (1893–95), written with the poet Charles Morice, which redeploys broad religious ideas and events, such as the origins of humanity and the devil’s temptation, to form a dark and elusive sequence with no clear beginning or end. Crudely rendered using rudimentary printing methods and set in a Tahitian landscape, these woodcuts are among the finest works on show and they speak the most emphatically of Gauguin’s search for the unknown and for spiritual awakening within an increasingly Europeanised Tahitian culture.

The difficulty for this exhibition, seeking as it does to redress the work of such a well-known artist outside of the confines of modernism, is that in emphasising the paintings’ meanings over their pure formal qualities it suffers from an overwhelming largeness of scope – endless possible sources and biographical twists and turns could be used to interpret the many subtle modifications in narrative theme and mechanism. Similarly, while Gauguin: Maker of Myth departs from the perception of Gauguin as modernist, it does not fully entertain the idea that he is postmodernist, despite self-consciously drawing upon the postmodernist concepts of narrative, language and cultural difference as the lens through which to reconsider Gauguin’s work.4 In approaching Gauguin armed with the tools of not-modernism, Gauguin: Maker of Myth’s remit is exhaustive and exhausting.

Yet Tate’s exhibition cleverly avoids another danger that could easily go hand-in-hand with its broadness of scope: that of over-explanation. By placing the majority of the letters, documents and biographical information in exhibition spaces separate to the paintings, the curators offer a “take it or leave it” approach to artistic interpretation. Though wall-texts and catalogue jump back and forth between the multitude of myths, ideas and fantasies that Gauguin invested his paintings with, these explanations remain far from prescriptive; rather, they encourage viewers themselves to identify and recreate Gauguin’s narratives, to partake in his myth-building. While we do so, paintings such as E haere oe i hia (Where Are You Going?) (1892) loom from the walls with ever more mystery, the guarded expressions of the scene’s inhabitants giving little away. By retaining the paintings’ reticence, the curators simultaneously preserve the eye of the artist-outsider: in Gauguin’s paintings, which are as much concerned with myth-making as they are with preserving the enigma and exoticism of distant cultures, the unknown will always prevail.

1. This was Tate’s Gauguin and the Pont-Aven Group. Prior to this, the Arts Council and Tate held a major monographic exhibition in 1955. 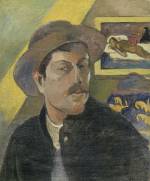 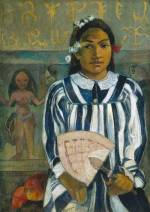