Following the artist’s progress from a small German artists’ community to the bright lights of Paris, this exhibition captures Modersohn-Becker’s constant striving to simplify and distil the essence of her subject 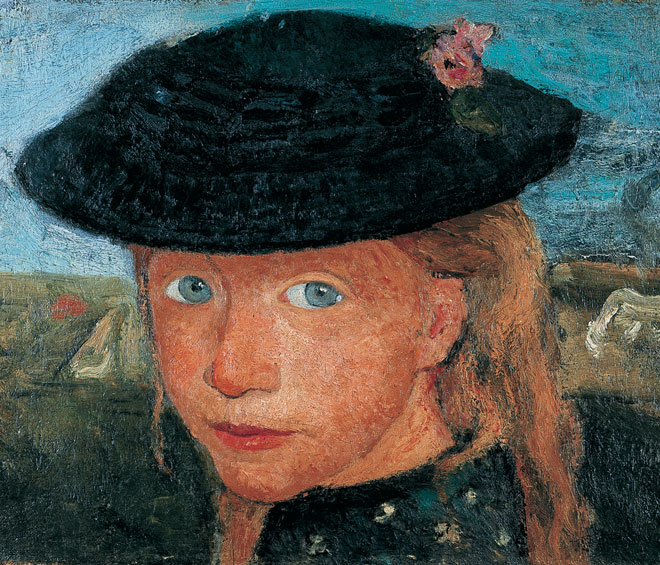 Heralded as the first female artist to paint a fully nude self-portrait, one might wonder why Paula Modersohn-Becker (1876-1907) is not more of a household name. Her short but highly fertile career – she produced more than 700 paintings in seven years (1900-07), working seven days a week, “with a passion that excludes everything else” – took place at a pivotal point in art history, and her trajectory from strict en plein air realism to a stylised, simplified manner, influenced and directed by her numerous stays in Paris, captures aspects of many of the movements of the time, while repeating personal themes and motifs to create a recognisable and cohesive oeuvre very much her own. A strong-minded character, Modersohn-Becker admired Auguste Rodin for his “disregard for conventions” and sought to follow suit. The low-angled compositions of many of her self-portraits allow her chin to be raised, conveying an attitude of defiance and air of pride, stating: “This is me.”

Born in Dresden in 1876, Modersohn-Becker was brought up in Bremen, where she saw the first exhibition of the Worpswede painters – including the works of Fritz Mackensen, Heinrich Vogeler and Otto Modersohn, who later became her husband – at the Kunsthalle in 1895. After taking drawing classes at the St John’s Wood Art School in London as a teenager, and receiving formal training as a painter at a private school for female artists in Berlin (Zeichen- und Malschule des Vereins der Künstlerinnen), Modersohn-Becker joined this small artistic community, which has been likened to a German equivalent of Barbizon, in 1898. Here, she began to paint the local peasants, often the children or the old women, showing a skill for accuracy and vision for understanding something of the psychological states of her sitters. Vieille femme assise, les mains croisées sur le ventre (1899), for example, carries a certain je ne sais quoi – a sadness, some weariness, an acceptance of her lot? Her furrowed brow and the tension in her hands suggest an intensity of thought and concern, but the woman does not meet our eyes, so her gaze is hard to read. In many of Modersohn-Becker’s other works, even – or perhaps especially – when the gaze meets the viewers’ own, the eyes remain empty, often pupilless, painted neither with colour nor any particular emotion. On one level, they recall Modigliani’s dark holes, but, unlike his, Modersohn-Becker’s eyes somehow speak volumes, perhaps allowing the viewer to reflect – or inflect – his or her own feelings and emotions on to the subject. There is an intensity and depth, a humanity and an empathy. The indefinable expressions and dark, impenetrable circles intensify the gaze, while keeping the viewer at a distance.

Modersohn-Becker paints children seriously, considering them as people in their own right, attributing adult states of mind and emotions. While Jeune fille au poids d’horloge (1900) and Petite paysanne de Worpswede assise sur une chaise (1905) might convey a very childlike sullenness, there is also a solemnity, and none of the carefree attitude usually associated with youngsters. Like Velazquéz’s Las Meninas, these are little adults, old before their time. Modersohn-Becker is not only interested in children, but in the bond between mother and child. A large number of her works represent this seemingly indivisible pair, often cuddled in the foetal position or in compositions recalling Romanesque iconography of the virgin and child, painted nude, and far removed from the ideal and sacred Marian imagery in their simple, down-to-earth, humanity. It is hard not to crack a smile at Mère allongée avec un enfant II (1906), as the way the baby’s legs are curled and the mother’s arm protects the child’s head are so full of love and warmth. This is the first time in the history of art that a female painter is inviting viewers to share in such an intimate maternal moment. One small painting, a closeup of a baby’s head suckling on a breast – Nourrisson au sein (1904) – again captures the tenderness and bond between the mother and child, with the baby, its weeny balled fist resting on its mother’s breast, looking absolutely at peace as it comforts and nourishes itself.

Modersohn-Becker herself was, at this time, childless, and letters to her husband suggest that she wished to remain so. In her early years with Otto, she acted as stepmother to his daughter, Elsbeth (another frequent model in her paintings), but, in 1906, she left once more for Paris, where her heart was now settled, without any plan to return. Influenced by Cézanne, Modersohn-Becker was producing numerous still-lifes, filled with objects of personal meaning (and credit should here be given that Nature morte au bocal de poissons rouges, 1906, featured the beautifully simplified goldfish before they were adopted by Henri Matisse), alongside ever-simpler self-portraits (she painted more than 20 from 1906-07), inspired both by Paul Gauguin and the Nabis, Matisse and the Fauves. Modersohn-Becker, who described classical art as “quite alienating”, strove continually to adopt a primitive simplicity, where she found a directness and authenticity lacking in academic painting, and her once astoundingly realistic hands are reduced, as, for example, in Mère nue en buste, avec un enfant sur son bras II (1906), to appendages that more closely resemble a paw or, even, a claw. By 1907, her style was a long way away from her earlier Worpswede years, having abandoned painting from life for painting from memory, and simplifying her figures to a point where they had become almost abstract, geometric shapes, completely non-academic or realistic, but powerfully emotive and carrying a portrait-likeness nevertheless.

Modersohn-Becker was influenced not only by her contemporaries, but also by endless hours spent in the Louvre, where she would sketch from the Old Masters, including Cranach, and became fascinated by the Egyptian Fayum Mummy portraits. Of the latter, she said: “It sounds so simple, yet it’s so very, very much,” describing how the simplicity of the facial features capture and preserve the essence of the person. Her Autoportait à la branche de camélia (1906-07) – later confiscated as degenerate by the Nazis – adopts many of the characteristics of these ancient Egyptian funerary portraits. It also exemplifies her tendency for tight cropping and framing, a technique that encourages the viewer to concentrate on the impassive, intense gaze, devoid of narrative or context. “Feeling what I am experiencing inside is so much more valuable and important than what goes on outside,” Modersohn-Becker noted. “The loneliness sometimes makes me sad, and sometimes happy. I believe it makes me a deeper person. And it makes me live less for the sake of appearances and recognition. We live turned toward the inside.” Perhaps this is where the eyes of her subjects are also turned?

On 2 November 1907, at the age of 31, after a reunion with Otto, Modersohn-Becker gave birth to a daughter, Mathilde. Eighteen days later, the artist died of a pulmonary embolism, exclaiming: “Schade!” (“What a shame!”). 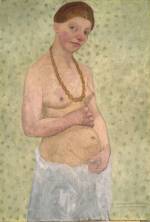 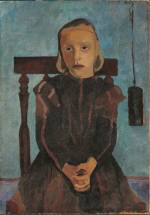 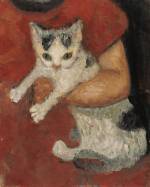 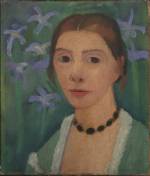 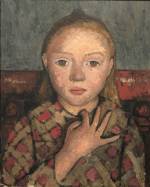 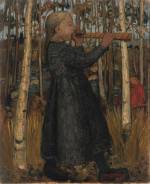 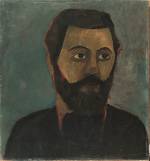 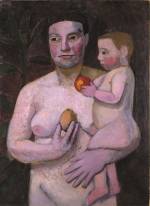