The Chinese artist Li Qing explores the tensions between east and west through the lens of architecture and the urban environment, documenting what he calls Hangzhou’s ‘lonely house’ phenomenon 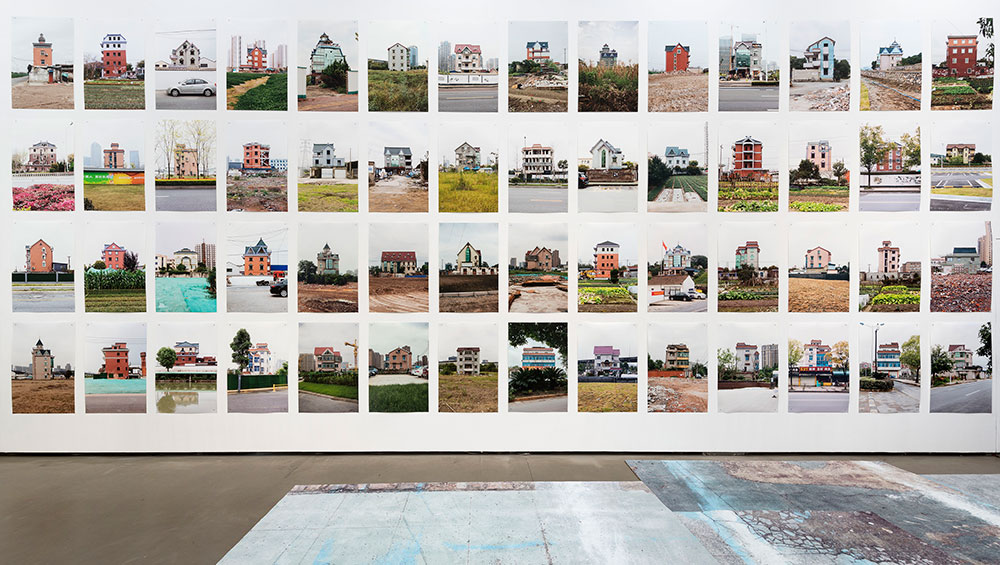 Li Qing (b1981), who is based in Hangzhou and Shanghai, recently had an exhibition titled Rear Windows at the Prada Rong Zhai, a cultural institution set in a restored 1918 villa in Shanghai. Through site-specific installations, Li illuminated the history of the architecture, a colonial fusion of French and Chinese design. Neon lights highlighted the decorative facade, and printed carpets echoed the patterned tiles from the bygone ballroom floor, revealing the complex history with Hitchcockian drama.

Li uses architecture and the urban environment as a tool to expose social history, never taking his surroundings at face value. An urban flaneur, he collects photographs and found objects from the cities he studies. Painting and collaging follows, bringing layers of human narrative to the works. Li’s work is a personal process. He grew up witnessing China opening up economically to the west and watching how urban life evolved through unexpected lenses such as window frames, strange urban phenomena and neon lights.

As Li explores the tensions between east and west in his work, Berlin was an appropriate city for his first solo show in Germany. The exhibition title, East of Eden, is embedded with many references. Li says: “The word east plays many roles. In Berlin, it brings up a lot of historical memories, because of its division. The novel East of Eden holds a cultural connection to the west, and the Christian concept of paradise – in the early 20th century, Chinese people saw the west as a kind of Eden. In Shanghai, the social clubs were designed in a western style, showing that if you lived in the west, you lived a good life. Likewise, when people in the west think of China, they might conjure images of landscapes or calligraphy, but they don’t see the brutal urban environments. The title is like a bridge between two worlds. It urges visitors to reconsider first appearances.”

Li found parallels between the urban environments of Berlin and those of Hangzhou and Shanghai. “When I first visited Berlin,” he says, “I associated it a lot with Shanghai because of the various architectural styles – classical European architecture in the west and modern, minimal architecture in the east. Hangzhou is quite similar to Berlin, too – there are the traditional Chinese gardens and buildings that you might see in a landscape painting, but there is also a very urban part of the city.” 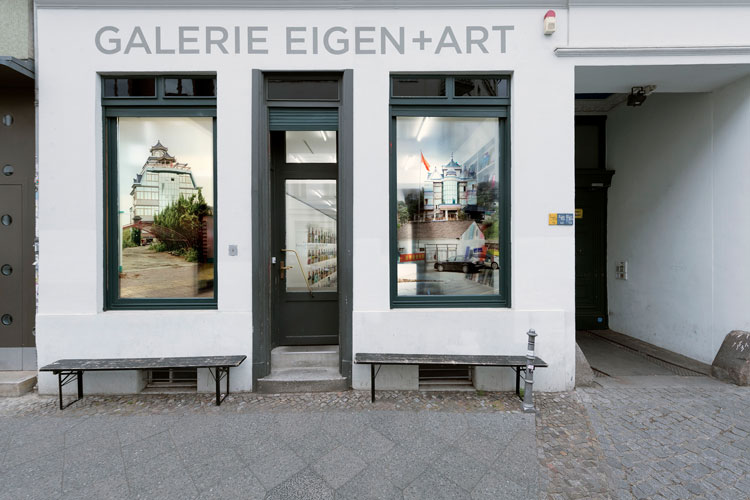 For East of Eden, Li has brought some of Hangzhou to the streets of Berlin. Passersby are treated to a window installation showing two large-scale photographs from his Hangzhou House photographic series, in which he documented what he calls “lonely houses”. These are rural houses built by farmers in a mock-western style, which have been caught up in Hangzhou’s expansion, which has become even more rapid because the 2022 Asian Games are to be held in the city. Sometimes, negotiations between the city and the farmers to purchase the land drag out, and urbanisation happens despite this – an effect that Li finds particularly surreal.

“I started the Hangzhou House series 20 years ago, documenting houses around the edges of the city designed and built by farmers from the countryside instead of architects. They tended to belong to a group of richer Chinese farmers and were built in a modern western style to reflect their wealth. However, because the farmers’ knowledge of the west was usually limited to one source, such as television, a magazine, or a conversation with another farmer from the countryside, the houses turned into a mix of western and Chinese styles. The houses show how knowledge of the western world reaches the Chinese rural community in a unique and simple form of exchange.” 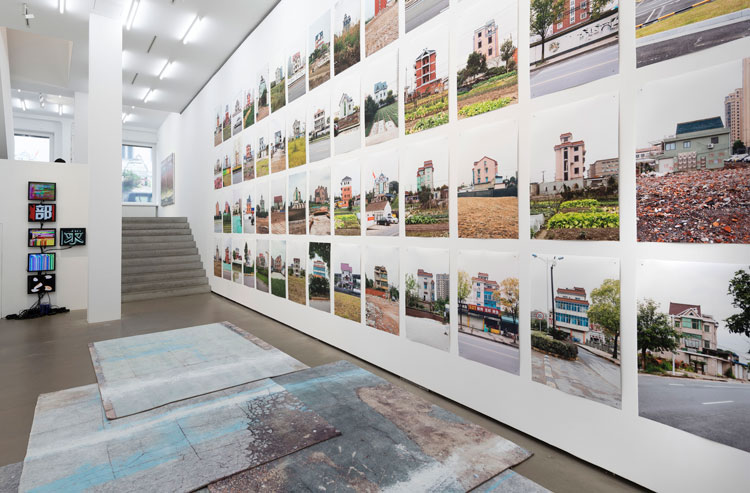 While the series spans 20 years, any stylistic changes to the houses have been fairly subtle, notes Li. “Between 2012 and 2013, the style became luxurious. Farmers started showing off with complicated decorations, gold-painted satellites, or even a miniature Chinese garden on the roof. Then, over the last five years, the style became simpler again, echoing the western modernist style of the 1920s.”

The biggest change to the houses is that they are now dying out. Li says: “Nowadays it’s harder to find the houses. Farmers are building houses further into Zhejiang province. However, the style doesn’t imitate the western residential style any more. Instead, the farmers choose a regional Chinese style. While they receive more knowledge of the western world than they did 20 years ago, they feel more connected to their culture, although the government plays an important role in this, promoting traditional architecture to farmers, so when tourists visit China they can see the essence of the Chinese culture. This is a very different scenario from 20 years ago.”

Li has a personal perspective on the houses because, as a student, he lived in one for seven years, getting to know his neighbours and their way of life. “Although the houses are built in a western style, the people who live there have a very traditional lifestyle, often even using wood to make a fire to cook. The ideologies of the farmers are very conservative. If a girlfriend and boyfriend lived together, the landlord would make a complaint or ask to do a religious ceremony – hanging a little red textile from the roof or preparing a rice offering to the god of the house. Although the houses are much cheaper to rent out than other types, for the farmers it is an important income.”

This collision of cultural ways of life, in which appearances are deceptive, is what fascinates Li the most. “While I think these houses represent a special period of Chinese urban history, the government sees them as fake western architecture with no value other than the economic value of the land. For me, the houses embody the conflicts of Chinese regional cultures and western culture.”

In the exhibition at Galerie Eigen + Art, elements of the installation transport visitors into domestic environments. Carpets are printed with photographs Li took of the exposed ground floors of Hangzhou farmers’ houses that were demolished. Textured wallpaper printed using brocade, a traditional Chinese embroidered textile, pictures the western influences areas on Shanghai’s waterfront area, the Bund, and Nanjing Road, one of the world’s busiest shopping streets. The series Neighbor’s Window (2016-19) uses window frames from demolished buildings in Shanghai’s French concession (an area once designated for the French) as canvases, layered with images from social media and paint.

Li describes how he builds up these works: “Living in the city, I have many chances to capture images, mainly using my phone because it’s more convenient and efficient. I also collect readymade images from magazines or the internet, and ephemera from a city, such as maps or tourist leaflets. Instagram is another way of observing architecture. It’s like collecting little pieces from different perspectives. The process forms an image of a place and slowly connects with it. I then collage them, and paint on top to create a new landscape of the city or building.”

While modern cities can often appear faceless and dehumanised, Li’s approach seeks to humanise them by understanding their emotional history. In the work Surface Science (2019), Li juxtaposes the surfaces of architecture and human skin using images of skin from magazines with found stones. “These two materials speak of the basic desires of the city – what you can see from where you live, and how you look at your body.” 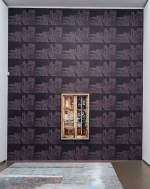