The sculptor talks about learning traditional crafts, the Smithsons’ Solar Pavilion, creating an exhibition for Mexico, and how her work resembles choreography 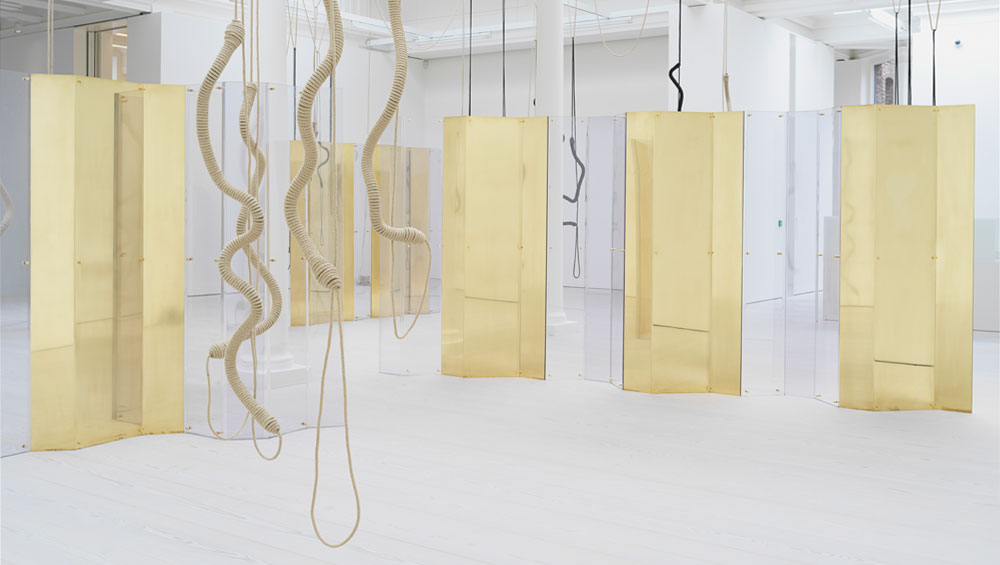 At London’s Marian Goodman Gallery, Leonor Antunes has opened the skylights. Below, brass and polycarbonate screens are juxtaposed with nylon and hemp ropes hanging from the ceiling. In the light of a summer heatwave, the whole shimmers like a desert mirage. Despite their ethereality, though, the screens are tethered to material culture. They are dubbed AS in the SP because they share dimensions with the glass window panels of Alison and Peter Smithson’s Solar Pavilion in Wiltshire, a low-cost summer house , built by the architects between 1959 and 1962 and remarkable for its simplicity of form. Antunes’ sculptures draw on the architectural form of the pavilion and the imagined sensation of Alison’s residence in it. And like a work of architecture, they invite you to walk around and between, to inhabit rather than study from afar. 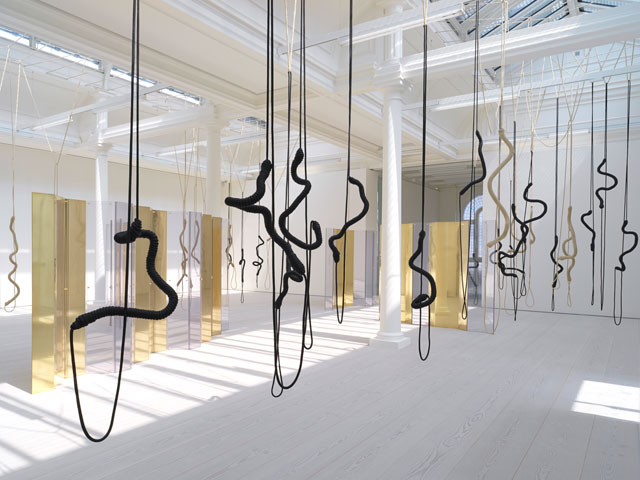 Born in Lisbon in 1972 and now based in Berlin, Antunes has spent her career investigating the possibilities of sculpture to connect with architecture and design, primarily that created by women. Further works at the Marian Goodman show, A thousand realities from an original mark, adapt forms from drawings by Anni Albers (1899-1994) and a relief by Mary Martin (1907-69); a concurrent exhibition at Mexico City’s Museo Tamayo, Discrepancies with CP, features reassembled objects from the Cuban designer Clara Porset (1895-1981). Each piece is a result of abundant research into these figures and their output. Antunes measures their works minutely before translating it into different materials and arrangements, melding the unfamiliar with the familiar. She often uses materials such as cork, leather and rubber, associated with ancient craft traditions, calling attention to the histories embedded within material production. Her completed arrangements are all site-specific works, and draw one’s notice to immediate contextual features and half-recalled memories and historical echoes. 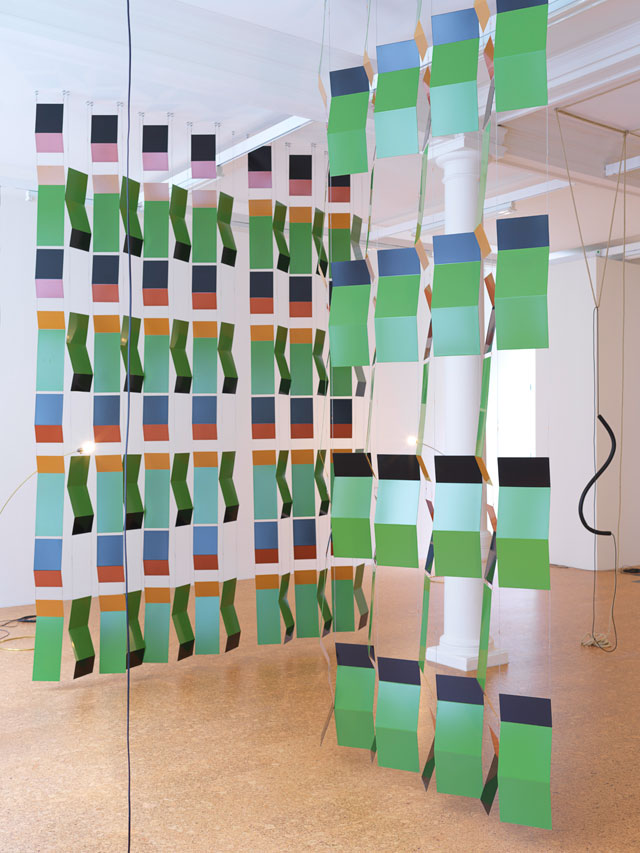 I talked to Antunes shortly before the end of her show at Marian Goodman.

Joe Lloyd: Your works are all site-specific. Where did you begin with A thousand realities from an original mark?

Leonor Antunes: Last year, I had an exhibition at the Whitechapel Gallery. Ideally, I’m commissioned to work in places where I can be really engaged with the site; it’s very rare that I exhibit in the same city or country twice within the space of a year. So, with this second London show, I decided to continue the research I had done for the Whitechapel.

JL: Several of the works at Marian Goodman elements from that building correspond to elements from the Upper Lawn Pavilion, or Solar Pavilion as it became known, the summerhouse built by architects Alison and Peter Smithson. What drew you to them?

LA: I've been very interested in the Smithsons for a long time. The first time I became more aware of their work was in 2007, during my first show in London, at the Dicksmith Gallery. From then on, I started doing a lot of research on them; I even met their daughter. And then, once I’d opened my show at the Whitechapel, the curator found a photograph of the Smithsons having lunch with Reyner Banham at the Solar Pavilion, and I was really struck by that image. I contacted the person who now owns the building. It was renovated a few years ago by a team of architects [Sergison Bates] who are very keen on the Smithson. So, it now looks as it did when the Smithsons were using it. 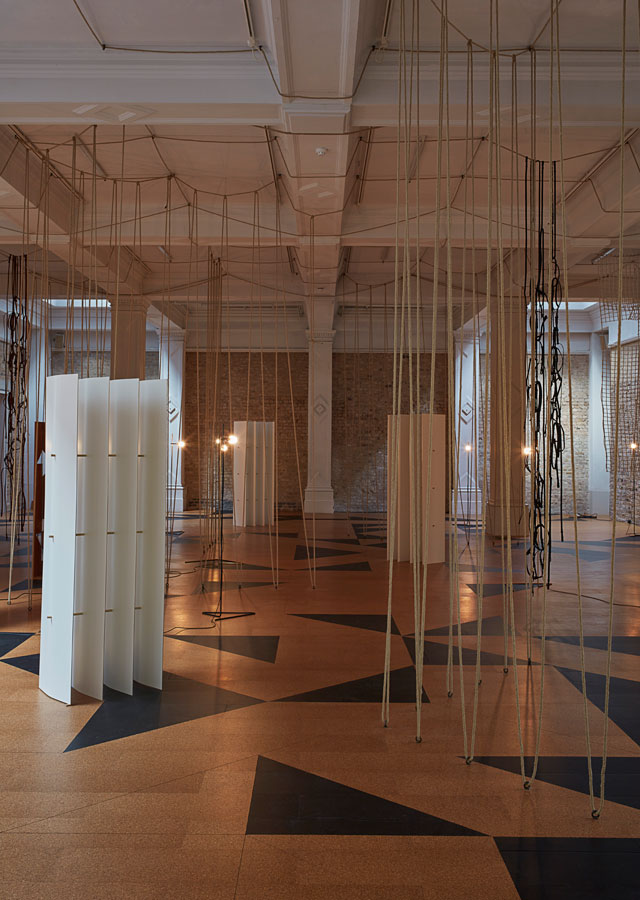 I was very interested in the notion that they were more invested in interiors than in building, partially because – like Cedric Price and that generation of architects – they weren’t invited to build many works. And like Price, they were very engaged with context and the idea of the found object. This is what I really appreciated in their work: the idea that you can work with elements that exist at the site. And that’s what basically they did with the Solar Pavilion.

JL: And you drew the show’s title – A thousand realities from an original mark – from a line by Alison in the Smithsons’ book on the building, this richly poetic text that feels to me quite unlike the austerity of their buildings.

LA: Yes, I’ve always liked that book so much. She wrote the diary while travelling to the Solar Pavilion in a car, and the book is very much about these travels back and forth from London, and the building as experienced when you arrive and depart. 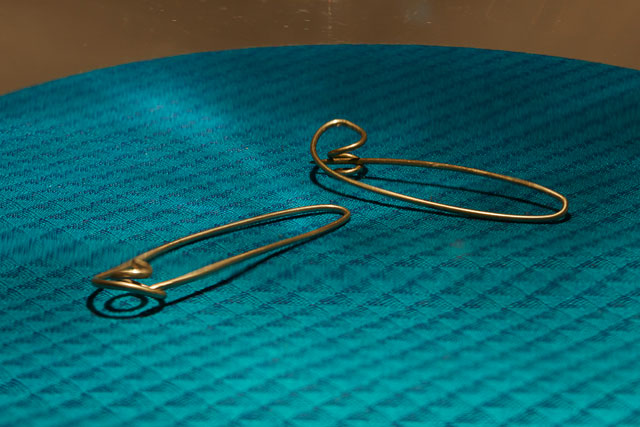 JL: The exhibition combines motifs from the Smithsons with those from the textile artist Anni Albers and the sculptor Mary Martin. Why did you decide to combine these figures?

LA: I was very much interested in the work of Martin as an artist based in London. I feel that, although they never met, Martin was much influenced by Albers’ textiles and drawings. I visited the Martin archive and saw her drawings, and confirmed with her son that she knew Albers’ work. It would be impossible that she didn’t: there are so many resemblances. My idea was to combine Martin, Albers and Alison Smithson’s forms in my work, and integrate them in terms of materials.

LA: I think it’s choreographic in a way. I’m interested the idea that I can do I certain gesture with a material, which the spectator can reconstitute – gestures of folding, of creasing, of twisting. And, also, the idea of starting with a flat surface – for example, with these works I begin with a template on paper, which is then printed and shaped – and measuring it, measuring sites, measuring elements, measuring lines. And then I like to twist these measured fragments around to create volume. So, it’s a kind of choreographic movement. The lines turn left, right, in this direction and that direction, so it’s very controlled. And it’s an intimate gesture, but when you exhibit it, it becomes this public thing. 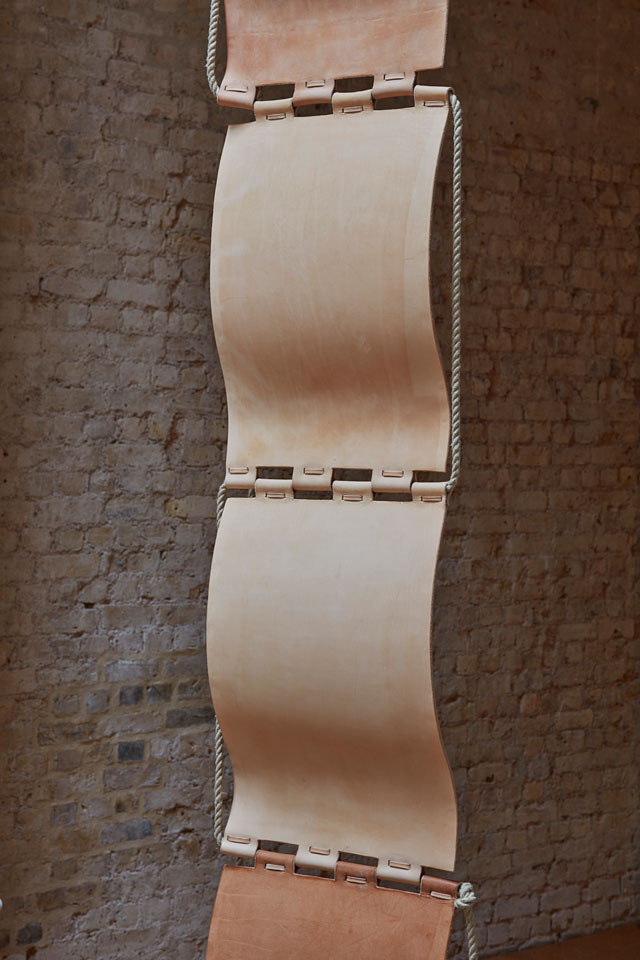 JL: Why do you choose to work in these large-scale, experiential assemblages or pieces?

LA: I like the idea of investing time in something, of researching widely into the subject. Ideally, I’d like to keep continuing to find things that could be interesting for my work. And my curiosity is wide: I really like to discover.

I think it’s why I’m interested in a lot of craftsmanship, in how people work with particular materials, and in ancient ways of doing things. I’m not fascinated by the material per se, but rather the idea of craftsmanship itself, and of knowledge. It’s a very specific knowledge that requires a lot of time and dedication, which is something I really respect. When making my pieces, I tend to work with the same carpenter, the same leather-worker, and so on. 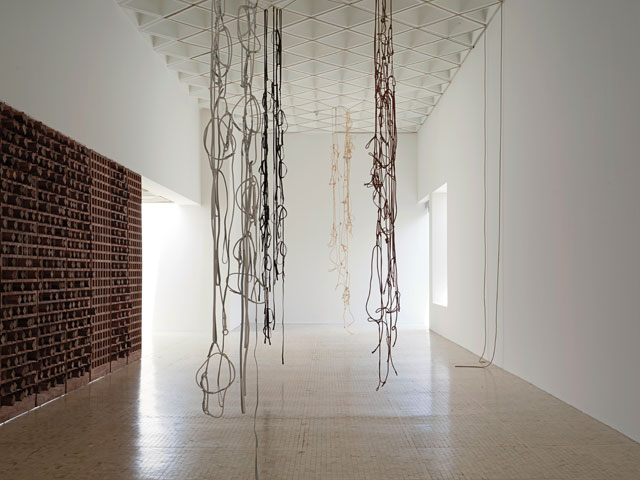 JL: Many of the figures your work deals with, including Albers and the Smithsons, could be described as modernists. Is there a connection between your interest in traditional craft and 20th-century art and design?

LA: Absolutely. The modernists were completely interested in craft. Anni Albers has the idea that the idea of the modern doesn’t mean modernisation. She believed that you can still be modern by using old crafts, and that modernity doesn’t have to come through industrialisation. She travelled a lot in South America to learn about old ways of dealing with material. And there were many others influenced by the same school of thought, for instance the Japanese-American artist Ruth Asawa. She studied at Black Mountain, where [Anni and her husband Josef] Albers taught, and became close to them. She went to Mexico to learn how to weave egg baskets, and had the idea of replacing the thread with wire. This is what I find beautiful – the idea of spending the time and learning from something. 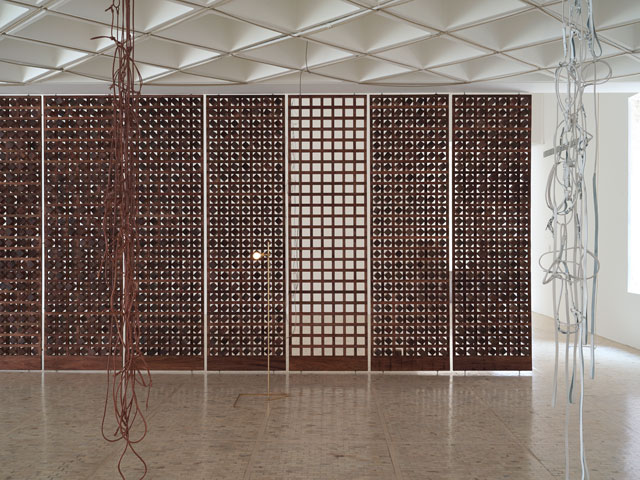 JL: You currently have another exhibition, discrepancies with CP, at Museo Tamayo in Mexico City, centred around the Cuban designer Clara Porset.

LA: Clara Porset was another person who studied with the Albers at Black Mountain. She was the one who brought the Albers to Mexico for the first time. Her work is very much part of the same nexus as the figures in which I am interested. She was very interested in indigenous sculptures, and integrated them into her work.

The show happened in a natural way. I’ve been invited for a few years, so I already had ideas for the sculptures. But I think I found the right moment to make these works exist. The [museum] building is very different from Marian Goodman. It’s brutalist, or rather the Mexican equivalent of brutalism, and it has a fantastic integration of natural light, high walls, rich materials, such as concrete and wood, and a ceiling full of varied shapes. The space is so strong that I just wanted my work to breathe in a natural way. And I wanted to create a show for Mexico about Mexico.

• Leonor Antunes’ Discrepancies with CP is on display at the Museo Tamayo, Mexico City, until 2 September 2018. 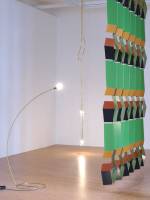 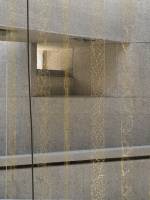