A Love Affair with Glass

'I believe glass loves me. My whole life has circled around this wonderful material … I know my focus is glass and will always be glass. This is my choice. This is my material, and I am in love with it'.1

Considered to be the founding father of the contemporary glass movement in Australia, Klaus Moje has played a pivotal role in shaping the history of studio glass practice in America and internationally for the past 30 years. In his own work, Moje has made or contributed significantly to innovations that have transformed the process of fused glass, while impacting generations of artists as an educator, spokesperson and international advocate for the medium. To mark Moje's 50 years of working with glass, during which the artist has gained increasing attention from peers, collectors, galleries and museum curators, in 2007 the Portland Art Museum in Portland, Oregon, selected 68 objects to showcase in a major survey of his work. Klaus Moje: Painting with Glass premiered at the Portland Art Museum at the end of May 2008 to an audience that, in many cases, knew of him.2 The artist's association with Portland-based Bullseye Glass Company and its founders; promotion by Bullseye's gallery of Moje and other fused-glass artists; and the Portland Art Museum's exhibition and collecting of art glass have brought local awareness to Moje's work. Now displayed in its final venue, the new home of New York City's Museum of Arts and Design, the exhibit (expanded with additional works for the New York showing) will introduce Moje's colour and light-filled glass marvels to hundreds of people who may be seeing his glass creations for the first time.

Likely to attract visitors by sheer proximity, the museum's new location is at the hub of a thriving crossroads for tourists, families and weekend pleasure-seekers from the suburbs. Whether shopping along Fifth Avenue or at the TIme Warner Center; en route to Central Park; making their way towards the many museums that line Central Park West and Fifth Avenue; or spending a leisurely day exploring Manhattan's Upper West Side, potential visitors to MAD's state-of-the art facilities cannot help but cross its threshold. The site has drawn considerable comment since long before it was purchased in 2002 by the museum.3 Critics feel that the original building, designed and built in 1964 by American architect Edward Durrell Stone (1902-1978), was worth preserving. Among Stone's most visible designs in New York are the main lobby and ballroom at the Waldoff-Astoria, Radio City Music Hall and the new Museum of Modern Art building, on which he worked from 1937 to 1939 with Philip Goodwin. At the time he worked on 2 Columbus Circle, Stone's aesthetic was against modernist tendencies in architecture. For the building's first tenant, the Huntington Hartford Gallery of Modern Art, he created an anachronistic blend of wood panelling, brass fixtures, classical-style columns, massive arches and other lavishly ornate decorations. Unfortunately, the space's limited exhibition space and lack of windows did not encourage visitors to spend much time within.

Certainly, this is not the case for MAD's new home. It is an apt setting for Moje's work, which revels in modernism; clarity, purity, precision and direct perception, unhindered by background texts and subtexts, narrative content, symbols and preconceived images. Glass is an unforgiving medium; fused glass, particularly, is rigid, yet Moje imparts fluidity to his fused creations through variation of such elements as colour saturation, patterning and transparency. In fact, the dynamic motion that appears to take place across the surfaces of his pieces is like the waves and ripples that travel across fine silk, or calm waters stirred by a summer breeze. His effects are profound but subtle, first affecting perceptions at the optical level, then registering in the brain. Within the realm of pure abstraction, Moje wields great power to subvert its parameters while paying his highest regards to them.

In the fully-illustrated colour exhibition catalogue, Bruce Guenther, chief curator and curator of Modern and Contemporary Art at the Portland Art Museum, names Moje's critical influences: Joseph Albers's colour and design theories and those of Albers's peers at the Bauhaus; De Stijl, Russian Constructivism and Op Art.4 The catalogue texts also reference other influences that have sparked specific works or new ways for Moje to consider glass; Aboriginal art, for instance. In his catalogue essay, London-based glass expert Dan Klein states that Moje's perception of colour and studio work changed after his 1982 move (with his partner, ceramist Brigitte Enders) to Australia, 'especially in its shift to a more daring and dazzling colour palette and the degree of technical sophistication, which was unmatched in any of his earlier work'. And a chance encounter with Edo-period textiles during a stopover in Tokyo on his way to the Tenth Niijima International Glass Art Festival at the Niijima Glass Center in Japan spurred Moje to develop, in collaboration with glassblowers Billy Morris and Dante Marioni, his 'Great Australian Rollup' technique. A proponent of cold working methods, Moje has practiced against the tide. For much of his career, studio glass artists focused on blown glass. Moje's experiments with rolling, resulting in his Niijima series (1999), allowed him to work with glass in a new way while dialoguing with artists using hot furnace methods.5

Born in 1936 and raised in Hamburg, Germany, Moje, at age 15, apprenticed as a glass grinder in his father's glass-cutting workshop. In 1955, he received his journeyman's certificate. In 1957, he entered the industrial glass school at Rheinbach to study engraving and grinding, then continued at another industrial-focused school at Hadamar. There, he was able to train in painting, lead lighting, sandblasting and mosaic. Having earned his Master's Certificate at these schools, Moje was set for a career in industrial glass. His subsequent change to studio work and vision of a pure painterly approach to glass (most evident in his turn from vessels to wall pieces) required years of experimentation to realise. Firmly rooted in a strict German work ethic and craft principles, Moje is that rare craftsperson who never yields form and technique to expression. As an educator, he has brought a much needed emphasise on technical integrity to a field that has tended to favor personal expression over craft. He has championed young artists and kiln-formed glass for decades. From 1969 on, he has represented Germany at the World Craft Council meetings; in 1973, he opened a gallery with his first wife in Hamburg to show works by young artists from around the globe; and he has encouraged former students, like Australian Kirstie Rea, to become teachers and mentors. Rea is now artistic director of the recently opened Canberra Glassworks in Canberra, Australia.

As a result of his long love affair with glass, Moje's relationship with his material resembles the connection between couples celebrating their gold wedding anniversaries. Like the most successful–and happy–of them, Moje understands that many surprises are yet to be revealed. The four panels displayed at the close of the exhibit represent one such surprise. The Portland Panels: Choreographed Geometry (2007) are more than 'ambitious', a term used by Bullseye Glass Company's director of research and education, Ted Sawyer, in his catalogue contribution, a detailed chronicle of their creation. Each panel measures 6 ft. x 4 ft. x 5/8 inches. To accomplish the work, Moje made a preliminary visit to the Bullseye factory to formulate a plan. Assembly, firing and finishing the panels involved a team of nine craftspeople and assistants, more than 22,000 hand-cut strips of sheet glass (19 x 3/8 x 1/8 inches) to make approximately 100 panels, a kiln large enough to accommodate the panels, and a special hanging system. The process translated into more than 600 hours of effort. Visitors to the show can watch a digital presentation of Moje at work on the panels.

Perhaps even more powerful than his impressive works, this digital window into his methods portrays a man whose love for glass has drawn great reserves of patience, dedication, commitment and joy from the artist. During his early career, Moje divided his time between composing music and studio glass. At one point, he chose to concentrate on visual art. As those who have chosen one love over another might discover, the choice is neither final nor definitive. As one loves in one direction, opportunities arise to express this love in other directions. In this way, not only is Moje a master of fused glass but a master musician. The rhythms that play across the surfaces of works in the Songlines and Impact series; the colours that vibrate in pieces from the Fragment and New Horizon series; the textures echoed in the Portland Panels–these are proofs of Moje's love affair with glass.

References
1. Quote reproduced in exhibition catalogue, Klaus Moje (Portland, OR: Portland Art Museum, 2008), from an article that appeared in The Glass Art Society Journal, 51.
2. Klaus Moje: Painting with Glass opened at the Portland Art Museum on 31 May and closed on 7 September 2008. The show travelled to the Toledo Museum of Art, Ohio, then moved to its final destination at the Museum of Arts and Design in New York for its run from 29 April to 20 September 2009.
3. Opened to the public in fall 2009, MAD's new facility has space dedicated to display the museum's permanent collection; an auditorium; art-making studios for students and professionals; classrooms; a library for reference works and video presentations of craft techniques; and areas where adults and children can access digital information on artists, exhibitions, craft and art history.
4. The paperback catalogue contains essays by Guenther and London-based glass specialist Dan Klein, and a section detailing the creation of the Portland Panels. Guenther points out that Albers trained in a technical glass school and, as did Moje, initially worked with stained glass.
5. In the exhibition catalogue, Klein explains Moje's 'rolling' technique, used by the artist in his Niijima series: '...Moje fused coloured glasses into patterned slabs through the course of several firings in a kiln, cooling and grinding the slabs, and then reheating them. The process made the slabs malleable enough to be picked up and wrapped–or rolled up–around a disc of clear glass on the end of a blowpipe to form a cylinder. The open end of this cylinder was then closed to form a bubble, which was subsequently blown and manipulated. The result was patterning in the round that had the softness and depth of fabric'. 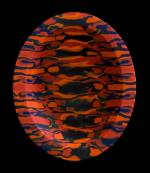 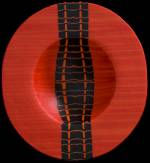 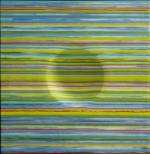