With her joyful neon palette and playful style, Kogelnik is often considered Austria’s pre-eminent pop artist. The powerful works in this show explore a period in which she moved to New York, rubbing shoulders with Andy Warhol and Roy Lichtenstein

The windowless, brutalist bunker of St Agnes church in Kreuzberg, Berlin, looks from the outside like a forbidding fortress; since the heavy door opens on to a thick black curtain, the visitor enters with an uneasy uncertainty as to what lies within. The answer – an unlikely one, given the building’s foundation as a Catholic church in 1967 – is an exciting programme of modern art exhibitions. Since 2011, when the disused building was acquired on a 120-year lease by art dealer Johann König and given a makeover by architect Arno Brandlhuber, the church’s lofty main hall and hidden crannies have been home to the König Galerie. In firm contrast to the traditional white cube, the walls remain the rough grey concrete set by the original architect Werner Düttmann, a pioneer in the 1960s West Berlin urban regeneration programme. In these dark, drab surroundings, the bright colours of Kiki Kogelnik’s paintings – produced in the same period in which the church was built – are showcased to brilliant effect.

Kogelnik (1935-97) is often considered Austria’s pre-eminent pop artist; her 1962 sculpture Bombs in Love (two found bomb casings, painted in red and green, initialled and embellished with the images of disembodied legs) was recently included in the Tate’s 2015 retrospective The World Goes Pop, while this is her second exhibition at the König Gallery. Kogelnik’s palette is joyfully neon: green, red, pink and yellow dance across the canvas, either in formal shapes or exuberant spatters, many of which retain an almost wet sheen. Her paintings are bold assemblages of shapes, often flattened figures set against abstract backgrounds, with elements sprayed or printed on to the hefty canvases: her playful style is exemplified in Portrait of an Attractive Man (1964), in which several coloured figures float orgiastically on their sides, contorting and flailing either in pleasure or in pain, as disembodied limbs sail by. The works in this show explore a formative period in Kogelnik’s life and career: in 1961, at the height of the cold war, she moved from Austria to New York, where she became an integral member of the burgeoning pop art scene, rubbing shoulders socially and artistically with Andy Warhol, Roy Lichtenstein and Robert Rauschenberg. While largely eschewing their interest in the commercial, Kogelnik was influenced enough by these artists to move from the abstract style of early works she had shown in Vienna to a new, bright aesthetic, experimenting with new materials and addressing the allure of technology.

The works in this show display Kogelnik’s preoccupation with machinery. Maschinenhände (1965) depicts a sinister contraption in which two hands are attached to bone-like rods by heavy screws. Several of the paintings focus on a silhouetted human form (Kogelnik made life-size paper cut-outs of her friends for this purpose) held together by cogs, with hinges at the knees and elbows. In M (c1964), the central figure, who recalls Leonardo da Vinci’s Vitruvian Man, has his knees conjoined by a dumbbell-shaped pin, suggesting an ominous restriction of movement; behind him is printed a large cog, its spokes made up of human footprints. To his side floats a headless blue figure, a blue ball shape covering its midriff, which is mirrored on the painting’s left by a swarm of bubbles, linked in turn to the central figure by a protruding, childlike bone shape. The effect is dreamlike and disquieting, the figures simultaneously comic and slightly menacing.

In Siempre Por Tio (1964), hung outside the exhibition’s main entrance, another floating figure is cut off at the feet, his disembodied footprints hovering between his calves. His body is split down the centre, separated by an exaggerated spine of blue circles, while large pins hold the two fractured halves together. Her 1965 drawing Untitled (Pump for Heart) is a pastiche of anatomical illustration: a small circle outside the outlined body leads by a thread to a neon-green heart, and is designated by a label reading “pump for heart”; man has become machine.

Kogelnik was particularly fascinated by the advances in space travel heralded by the cold war, and, in 1969, she spent the live broadcast of the landing of Apollo 11 in performance at the Galerie Nächst St Stephan in Vienna, creating a series of moon-themed silkscreens for the occasion. While most of the works in this exhibition reference space travel only obliquely, a small collage on the wall (Ich Kogelnik Möchte Gern, 1963) overlays chocolate wrappers with images of comic-book heroes and doodled astronauts and rockets; it draws together Kogelnik’s interest in the superhuman and the power of technology to extend the parameters of human existence, while remaining characteristically tongue-in-cheek.

In the late 60s, Kogelnik extended her flat figures into three dimensions by turning her paper stencils into dismembered vinyl bodies that she hung over metal clothing racks: a small yellow Hanging is presented here, a strangely compelling signature style that recalls the mobiles of Alexander Calder. Focusing exclusively on the years 1962-68, this small but fascinating exhibition does not feature Kogelnik’s more explicitly feminist pieces of the 70s, nor her astonishing later works, which extended her interest in mortality, and the increasing fear of human irrelevance to a world transformed by technology, by closing in, eerily, on skulls and faces. Yet her arresting paintings have a strangely metaphysical dimension that befits their church surroundings: these powerful works deserve to cement Kogelnik’s reputation as an important and prescient interrogator of humanity’s position in an ever-dehumanising world. 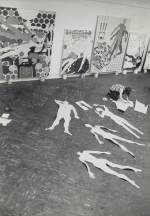 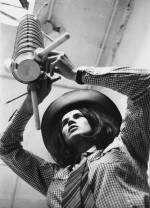 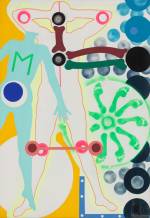 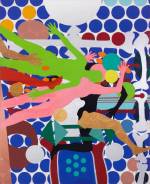 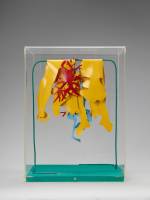