The referential, finely wrought paintings and drawings of the rediscovered Georgian artist prove inscrutable but seductive 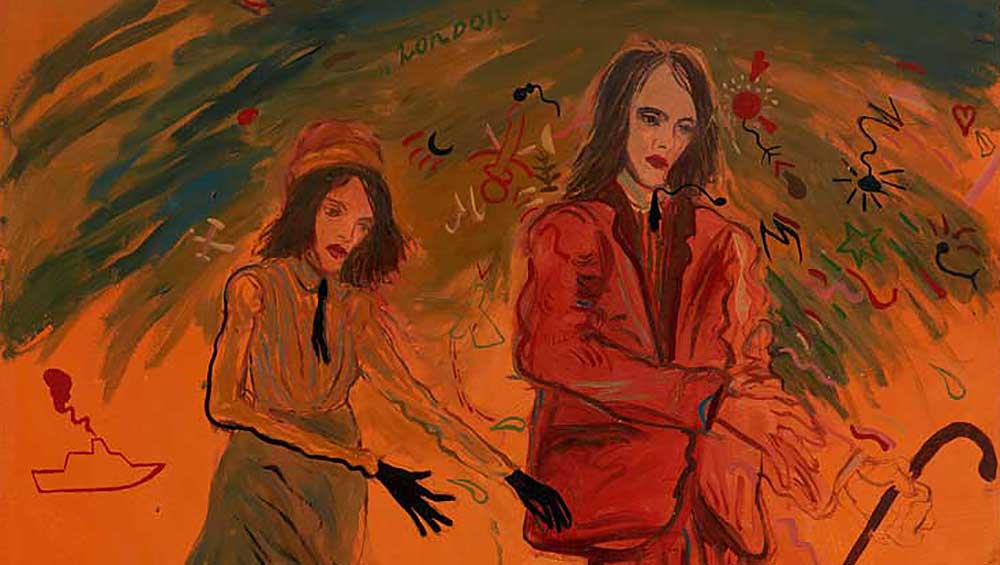 Two figures haunt People and Places, an exhibition of the Georgian artist, historian, essayist, editor, poet and theorist Karlo Kacharava (1964-94) at Modern Art gallery in London. One is a sallow, emaciated man with a gothic sliver of a face and a mane of black hair, and then a slightly shorter woman with very slightly softer features and only marginally lighter hair. In a painting called English Romanticism (1992), we see them dolled up in clothes from an earlier time, against a blazing backdrop that could be sunset or bonfire. Little marks and sketches, including the outline of a steamship, float around in the background. In another piece, Fur Jorg Immendorf (1985), they appear warmer and more content, in a garden doubling as a pastoral idyll, while Gloria (1991) features the male figure alone in military attire, standing next to a camel. In nearly all these depictions, the figures clasp their hands. 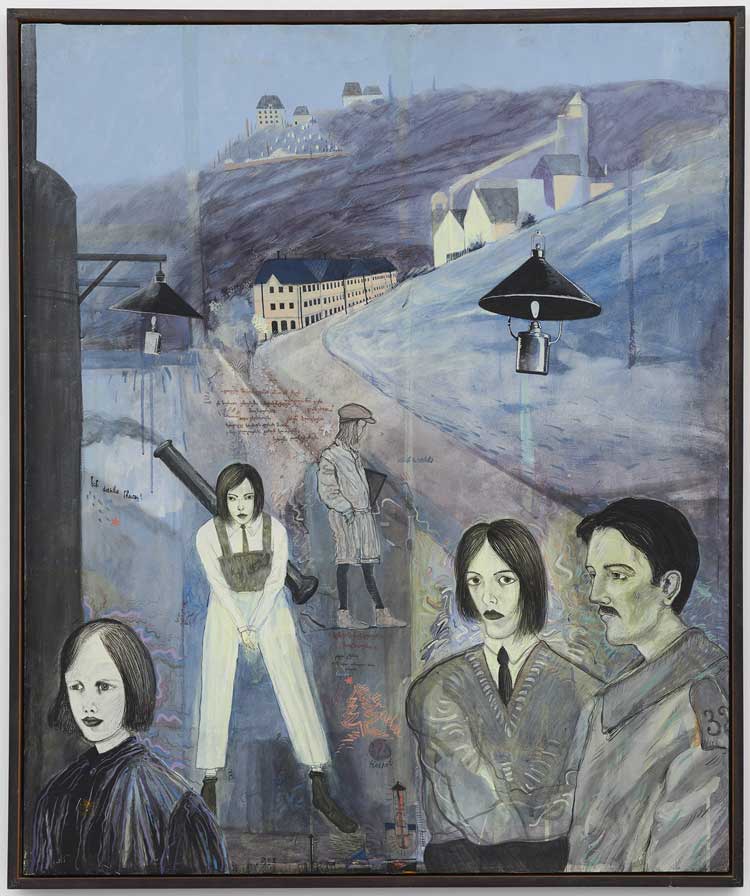 The woman is likely to be Helena Lundberg, a Swedish authority on Russian literature who was Kacharava’s life partner. And the man might represent Kacharava himself, although his features little resemble the bearded figure in the artist’s successive Self-portrait drawings, or the round-faced, content man branching a six-pack of beers in one photograph. They instead seem to be projections, exaggerated figures from a Munchian bohemia. Kacharava’s paintings are often playful, smashing text and image together and playing around with the form of the picture plane, but they also have a sort of melancholy. Sentimental Journey (1993) – named for the Laurence Sterne novel, the Doris Day song, or neither – features variants of these characters and others in a grim wintry landscape.

Kacharava was astonishingly prolific. Despite working as an art historian, editing journals, leading art collectives and writing poems and articles, he found the time to produce thousands of paintings and drawings in his short career. Although People and Places represents only a fraction of his work, it captures an artist who relentlessly captured the world he experienced. A selection of his sketchbooks suggests someone who could not stop drawing. 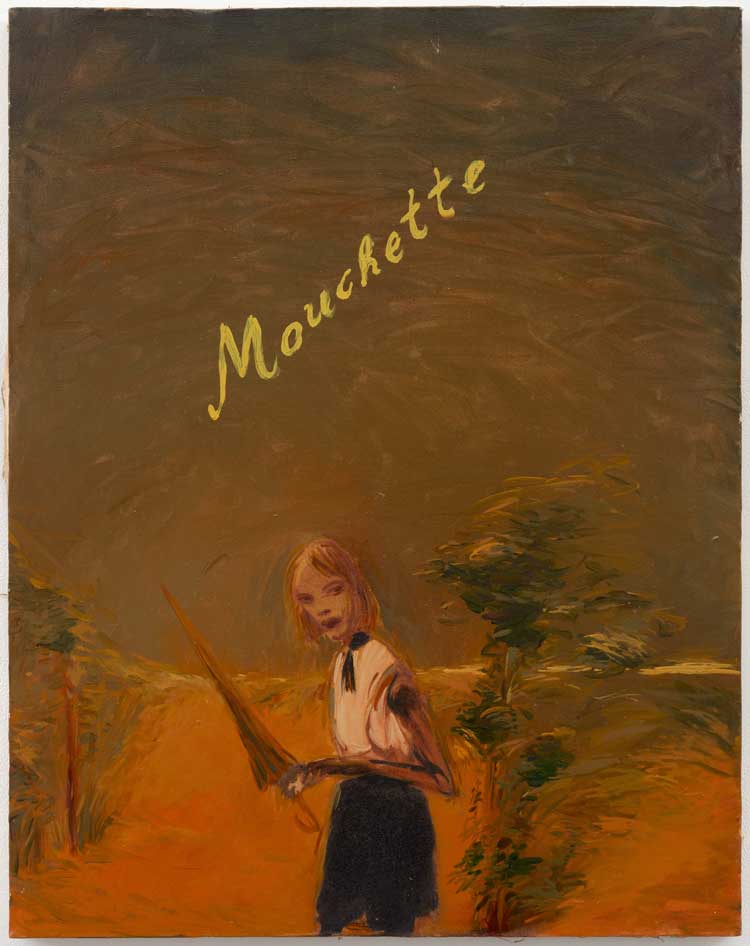 Some works seem to be swift reactions to other forms of art. The painting Mouchette (1993), for instance, captures the protagonist of Robert Bresson’s bracing 1967 film of the same name. Other pieces interpolate collage, imitate book covers or are divided into comic strip-esque sequences. His style is various: Crisis Chronicle (1987) is a patchwork of minute portraits, drawn in colours of which the late Kazimir Malevich might have approved. Karlo Carra (1992) – perhaps a reference to the Italian futurist Carlo Carrà – presents a muscular female figure against a cubist backdrop. Dream (1983), in which a nude woman comforts a child while the lower body of another manifests on a cupboard, is surrealist down to its name. But most prominent, though, is the shadow of German expressionism, with Kacharava’s often vividly coloured emotionalism. 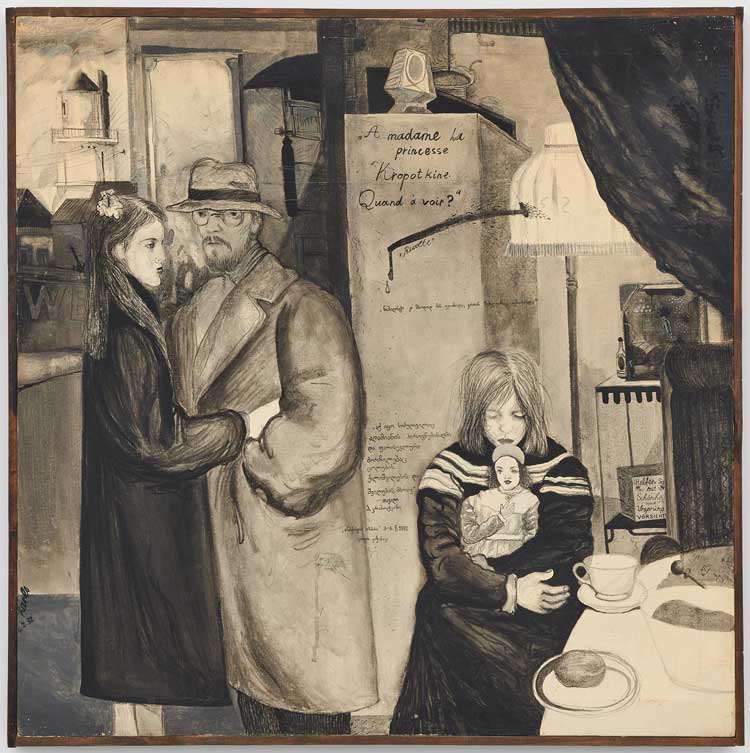 Kacharava’s career coincided with the international neo-expressionist wave. He was poised to be Georgia’s first post-Soviet breakthrough artist, especially after he travelled out from the disintegrating USSR in 1990 and featured in a string of exhibitions across Europe. But Kacharava’s big breakthrough never came. His life was cut cruelly short after he was struck on the back of the head by a Moscow burglar; six months later, he died from a brain aneurysm. His first major solo show at Tbilisi’s National Gallery became his epitaph. In 1997, he was posthumously awarded the Giorgi Chubinashvili State Prize for his contribution to art history. But, outside Georgia at least, Kacharava has remained a marginal figure. 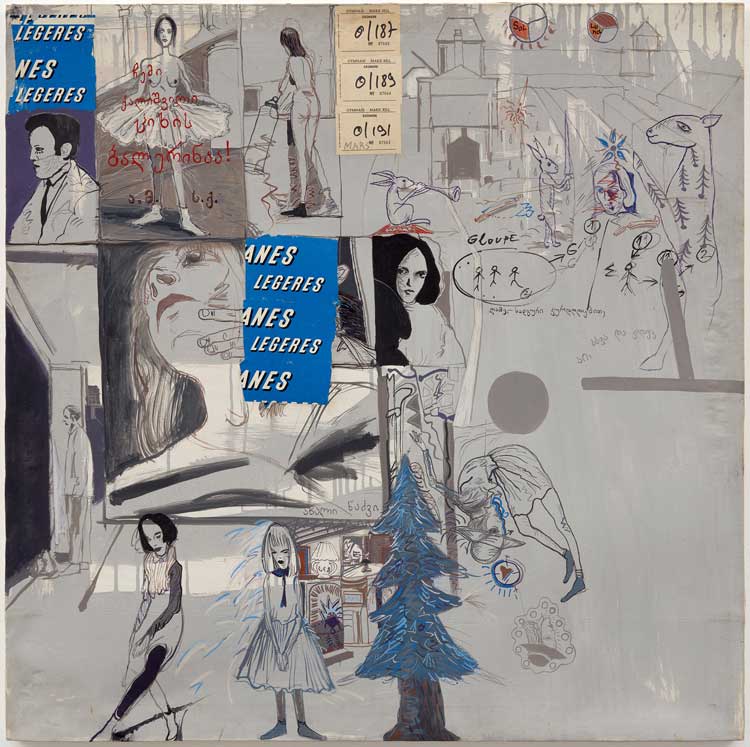 Georgia itself has a certain marginality. Nestled in the Caucasus that bridges Europe and Asia, it has a history of struggle against conquest from either side, from the Mongols to the Bolsheviks. Yet despite persistent threats, it has maintained its own distinctive culture and language. For the imperial Russians, it was a site of romanticism and wonder, though one they wasted no time in subjugating, later repeated by the Soviet Union. As part of the USSR, Georgia was often marginalised. In 1978, the superstate tried to install Russian as the republic’s official language, a measure that was only overturned after mass protests. Tensions with Moscow remain today. 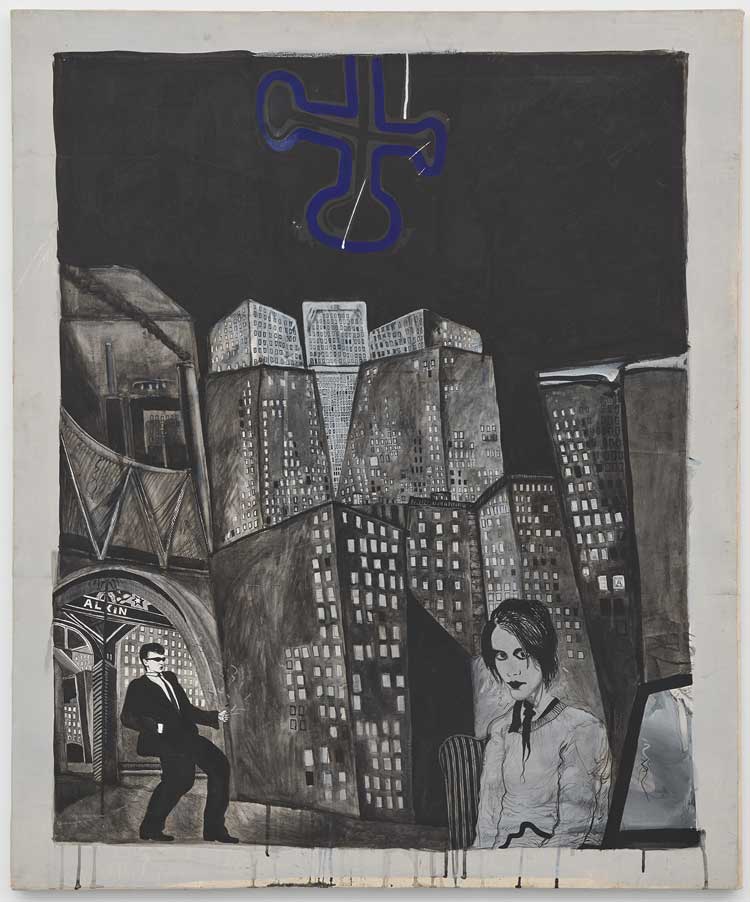 Given all this, it is perhaps unsurprising that Kacharava’s paintings seem to shove Russia out of the picture. His texts are in Georgian and Latin scripts, with no space for Cyrillic. He places us in various imagined western settings: the work on paper Irena Ilona Bus (1992) has one of the US’s cross-country Greyhound buses gliding across a chilled cityscape. In Perversion of Kings (1993), we are unmistakably beneath the city lights of New York. Kacharava never visited the US. The vast majority of his cultural references also come from various wests: whether the Australian-born, England-based singer Nick Cave, the American essayist Susan Sontag, the French novelist Patrick Modiano or the German artist Jörg Immendorff. 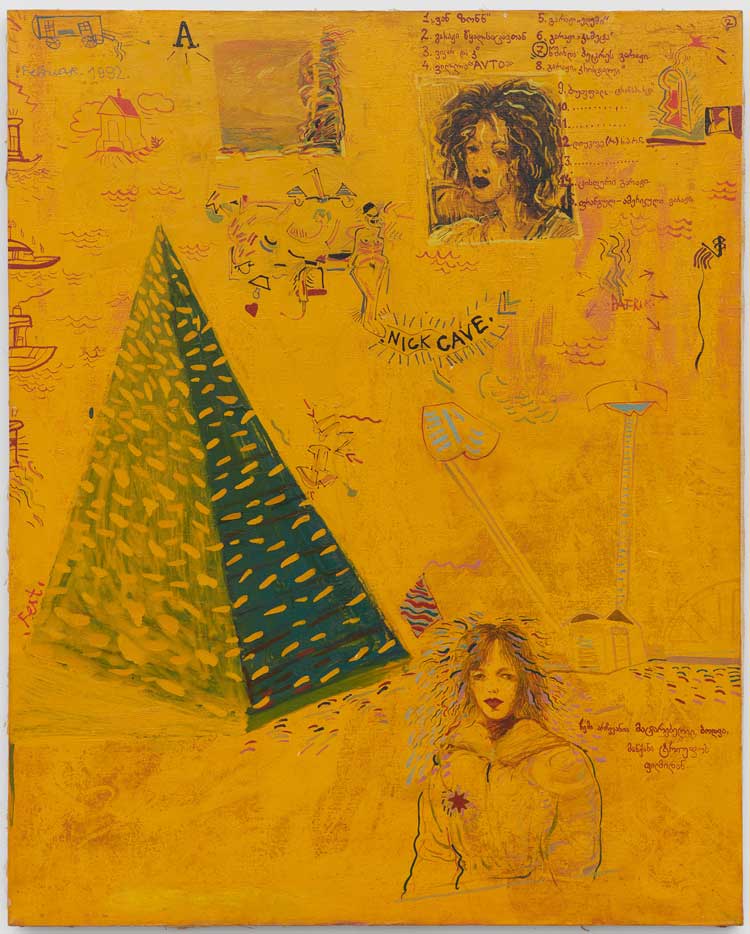 We can learn something about Kacharava from all these sympathies, and not just because they show a man of broad cultural tastes, tracking developments. The iconoclastic Immendorff began as a radical performance artist (and anti-Soviet activist) and then turned to paintings that fused image and text in ever-more complex arrangements. Cave, who gives his name to an obtuse 1992 painting, began his career by combining punk-ish energy with a literary, poetic bent that sometimes turned towards the macabre. The figures in Kacharava’s paintings often resemble the black-haired, rake-thin Cave. The novels of the Nobel Prize-winner Modiano almost all take place in a contemporary Paris that seems overlain with its Nazi occupation, a noir-inflicted city of pallid ghosts.

Then there is Sontag, whose most famous essay, Against Interpretation (1966), cautioned against overemphasising the content or meaning of an artwork over its aesthetic aspects. I wonder whether Kacharava would agree? Approaching him today, without knowledge of the Georgian language and access to his writings, does place the paintings themselves at the forefront. People and Places shows Kacharava as a sensuous, multi-talented artist, equally adept at graphic sketches as richly arranged opuses – and of whom there is much more to discover. 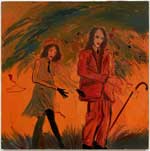