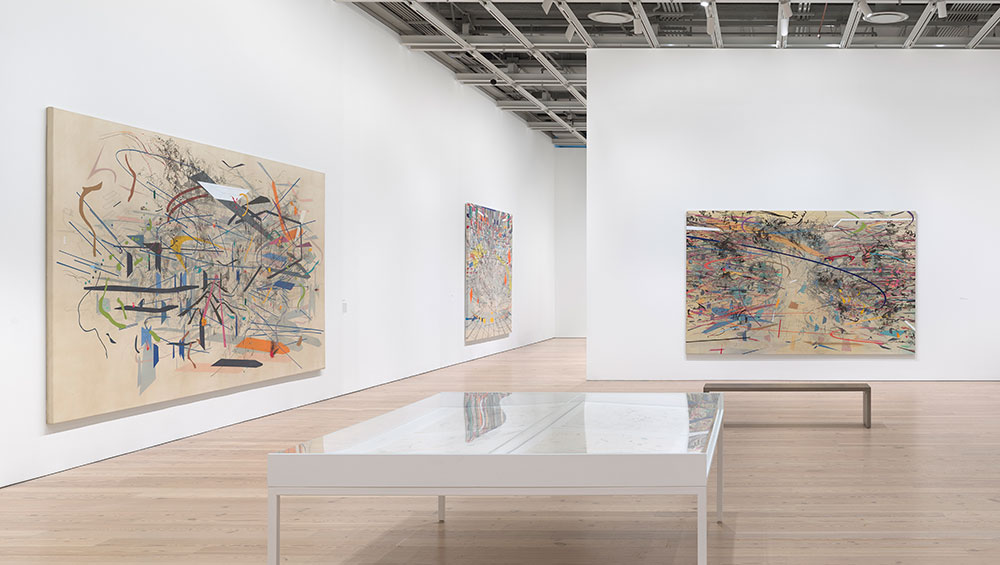 Julie Mehretu’s explosive mid-career survey, spanning 25 years of paintings, drawings and prints, launched with a bang on 25 March at the Whitney Museum. This was after a year-long delay due to the Covid-19 pandemic that has disrupted all aspects of life on this planet. The show’s first stop, at the Los Angeles County Museum of Art, was more fortunate in its timing, opening in November 2019. Exemplarily organised by co-curators Christine Y Kim of LACMA and Rujeko Hockley of the Whitney, nearly half of the approximately 75 works on view are paintings of a scale and complexity that to call them stunning is an understatement. 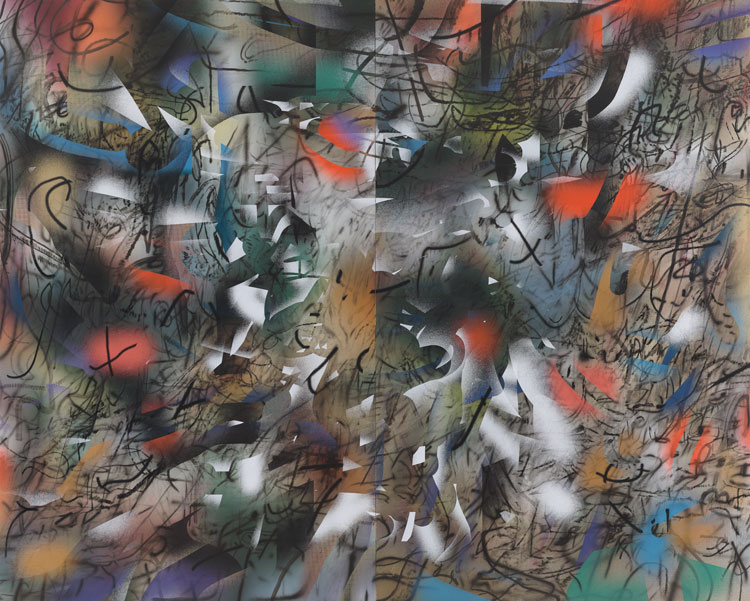 Mehretu was born in 1970 in Addis Ababa, her father Ethiopian, her mother American. They fled to the United States in 1977 to escape the escalating terror of life under the military junta then in power. She earned an MFA from the Rhode Island School of Design in 1997 and, in 1999, she arrived in New York, taking part in the Studio Museum in Harlem’s storied artists’ residency programme the following year. Harlem at the time was also home to several new groundbreaking galleries, including The Project, which presciently supported a string of up-and-coming artists who have since gone on to have thriving careers. Mehretu was one of the most dazzling of them, singled out for her finely rendered, intricate drawings and paintings, for catapulting abstraction into uncharted territory.

Among the earliest works here are two schematised ink drawings from 1996, both Migration Direction Maps, with seemingly haphazard directional arrows thrown in, an early example of the themes and distinctive compositional strategies that will become her calling card. The taut Untitled 2 (2001) and Babel Unleashed (both 2001), both 5ft x 7ft (152 x 213 cm) have centralised compositions, their meticulously rendered, fine-line diagrams whiplashed by colourful bands of varying widths, the work swerving centripetally and centrifugally between the two-dimensional and the semblance of three, adding to its sense of combustion and motion.

Over time, her compositions have become increasingly dense, immersive, their multiple layers stacking up like overlaid time-lapse stills. Or like stratigraphy, as a site to be excavated, revealing their prodigious array of references: urban maps, sports stadiums, airport terminals, military installations, comics, national flags, pop-culture icons, logos from corporate brands, newspaper photographs of wildfires and protests, and infinitely more – information transformed into imagery, fiction piggybacking on fact. She also mines art history extensively, pulling up images derived from the Russian avant-garde and Italian futurism, say. Modernist artists such as Picasso and Mondrian make frequent appearances. And she deftly deploys many different disciplines, from printmaking, long essential to her practice, to drawing, mark-making and other traditional techniques dependent on the hand in addition to the latest in digital advances.

Mehretu’s scale also makes a quantum leap upward as the exhibition proceeds. Retopistics: A Renegade Excavation (2001) is her first truly immense painting, measuring just over 8ft x 17ft (258 x 530 cm), an ambitious scale that will become another trademark (her 2010 Goldman Sachs Mural measures an even more colossal 23ft x 80 ft). Focusing on systems of mass transit, the movement of great masses of people through space and its impact is yet another ongoing subject, often pictured from an aerial perspective, a drone’s eye view, we might say now. 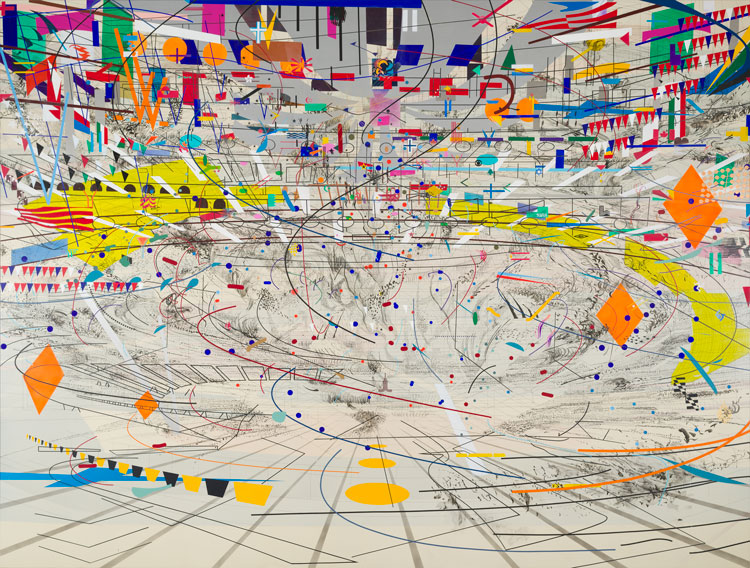 Stadia II (2004), although a bit smaller, packs an even greater eye-filling punch. Less wide, the composition is zoned into three tiers (like heaven, earth and hell in European religious paintings) and depicts sections of an assortment of stadiums, theatres, forums and other outdoor arenas for large public gatherings. Stadiums are “a particular form of architecture”, Mehretu said, and serve as “public squares”. Double-edged, they are not only locations for spectacle and entertainment, they also function as a stage for agit-prop, demonstrations and, inevitably, violence. Brightly coloured pennants and flags disarmingly bedeck the upper region, while diamond shapes, circles and ovals orbit the field, the palette shifting to black and white from the middle section downwards. The bands at the bottom of the composition evoke one-point perspective floor plans such as those seen in drawings of Renaissance ideal cities, the radial lines leading the eye toward the centre. But, here, the centre does not hold – a vortex sucking the gaze into its unstable, obscured core. This is not a rational, fixed world, but one that is mercurial, in a state of reactivity. It is in constant collapse and restitution, moving from coherence to dissolution to new structures, reflecting the fluidity of social systems – that are ultimately about human stories. 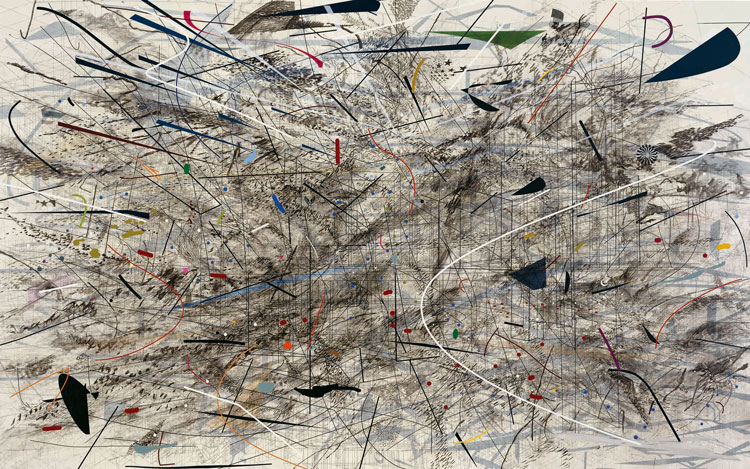 By the mid-2000s, Mehretu doubled down even more on colonialism, the rise of authoritarian governments, and the brutal inequities of the open-ended war on terror that began after 9/11. Black City (2007) looks at fortified cities and their scarred histories (there are Nazi bunkers here, as well as military insignias, for instance), the colour tamped down, encapsulated into thin lines and strips here and there, or small dots, like pins on a military map targeting a site. Black and white is the dominant colour scheme, eliminating distractions. Structured as a rectilinear –although asymmetric – grid of delicate, overlaid webs, the surface ebbs and flows with streams of tiny black marks that Mehretu calls characters. They once again represent patterns of mass migrations, what initiates them and what their impact on habitats and history are. Berliner Plätze (2009) is even more ghostly, the painting wavering optically as the viewer moves in front of it. It was conceived when Mehretu was living in Berlin: she added erasure to her pictorial syntax after realising that the new buildings she saw among the 19th- and early 20th-century edifices marked places that were bombed during the second world war. It was a representation of the ravages and trauma of combat embedded in the space.

The Arab spring (2010-2012) profoundly affected Mehretu. A pro-democracy movement, it began euphorically, toppling entrenched regimes across North Africa and parts of the Middle East to global astonishment and elation, only to sputter tragically as new dictators seized power, reversing what had seemed to be a people’s victory as the region disintegrated. 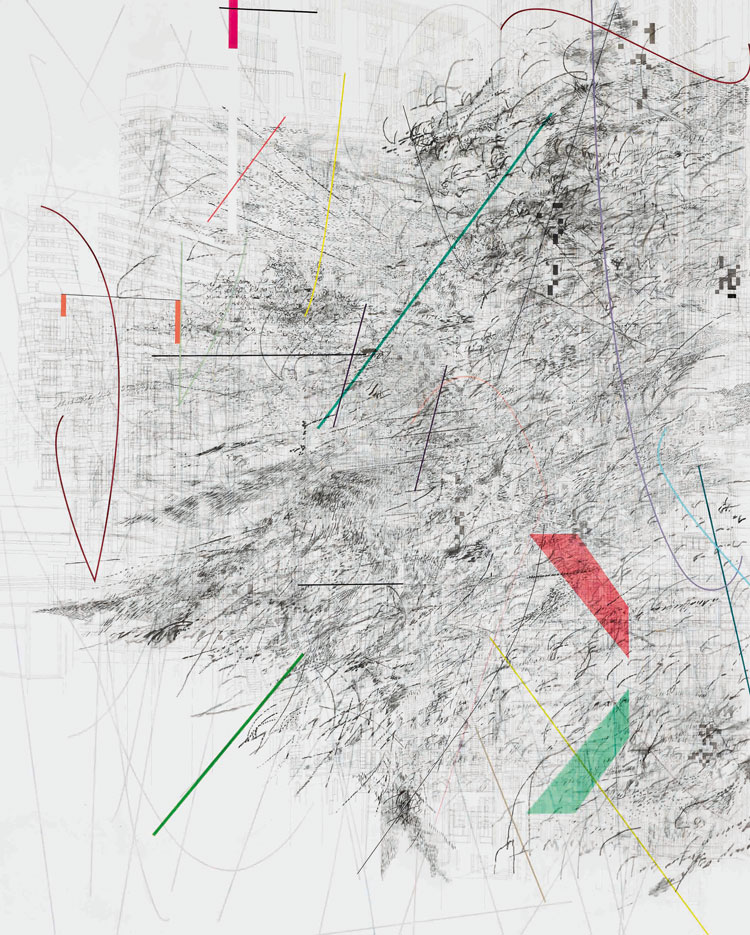 Mogamma (A Painting in Four Parts) (2012), inspired by the Arab spring, and another of the show’s standouts, consists of a quartet of imposing paintings hung in a dedicated space created out of portable walls. Named after a well-known brutalist building in Tahrir Square, Cairo, street maps of the square and drawings of its architecture underpin the work, the buildings a record of the forces (Mamluk, Islamic, European) that have passed through it, leaving their mark, only to be altered in turn. While depicting actual events and sites, they are also, as in her other works, “story maps of no location”, she said. Emphatically vertical in orientation, they are vertiginous, almost quadriphonic (her paintings often seem audible). And again, while colour is present, even abundantly so, the general impression is of a pale grey ground, with sections corrupted, erased, as if by contagion, she said, a word with which we have all become much too familiar. 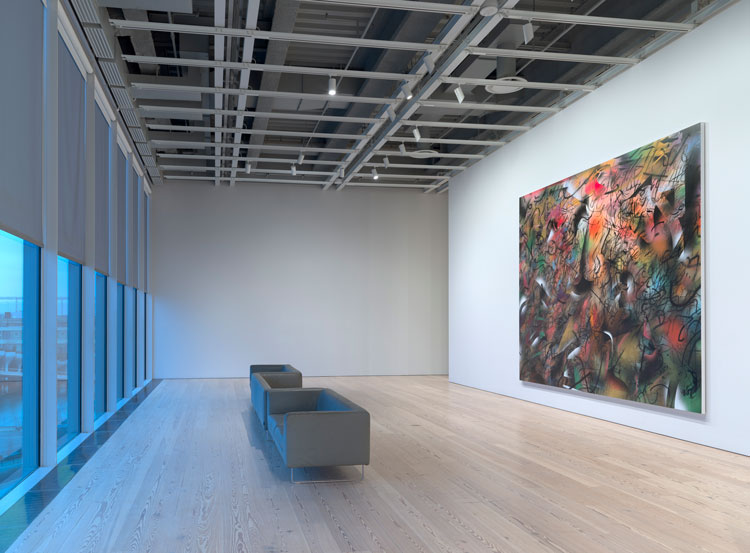 In the recent paintings, her works have become more and more painterly, the emphasis on colour, the drawing, while present, seems woven into the overall compositional fabric. Ghosthymn (after the Raft) (2019-21), referring to Géricault’s emblematic Romantic painting The Raft of the Medusa, is the newest work. It was conceived for the gallery where it is hung, with its panoramic view of the Hudson River which conveyed so many desperate, hopeful immigrants from Ellis Island to New York and the United States. Its colours are rich, sonorous – as if singing the painting electric – the scribbled lines calligraphic, vigorous, the forms in flux, coming in and out of focus as if digitalised, the mix of hand and the technological creating a contemporary sense of space and time, the feints of abstraction updated, negotiating with the past but emphatically in the present. Mehretu’s vision is both epic and intimate, containing multitudes. Juggling all of it, like the master she is, she lands it all perfectly.