Damien Hirst has opened his new space, Newport Street Gallery, with an impressive display of his collection of British painter John Hoyland’s large-scale canvases – yet the beauty of the paintings vies for attention with the stunning buildings in which they are housed.

Hoyland (1934–2011) is one of Britain’s most renowned abstract artists and this sensitively curated show covers works produced between 1964 and 1982, a key period in the artist’s career that saw variation and experimentation in the creative process and visual impact of his work. Hirst – himself a great admirer of Hoyland – has organised the works chronologically across the six rooms of this former theatre-set painting studio and barrow-making workshop in south London. The space has been transformed by Caruso St John, the architectural firm responsible for the V&A Museum of Childhood and the renovations at Tate Britain and the Sir John Soane’s Museum. It is now a high, bright, museum-style set of rooms flanked by two typically impressive organic staircases for the flow of what is expected to be a great deal of traffic coming to view various exhibitions of Hirst’s 3,000-strong collection of artworks and objects.

Although there is little interpretation directly accompanying the show beyond an extensive biography in the exhibition leaflet – even the captions are absent from the walls and most appear in title-only form in the handout – the selection here elucidates Hoyland’s ongoing exploration of colour and form throughout his career. The first two rooms cover the short period 1964-66 and are hung according to colour (red in the first room, green in the second). The enormous scale of the works and their thinned-acrylic surfaces simultaneously pulsate with vibrant colour and lie distant from their onlookers, apparently presenting sheer surface. Despite this, works such as 29.12.66 (1966) and 28.6.67 (1967) seem to depict the wispy vertical movement of rising smoke that could have lent itself to the exhibition’s title, and it is arguable that these works offer further hints and figuration within the realm of the architectural: squares and rectangles could offer doorways or windows, while diagonals and bold patches of colour suggest shafts of light falling through recessed or stacked spaces.

While his work bears similarities to that of American abstract expressionist painters such as Mark Rothko, Jules Olitski and Barnett Newman, Hoyland was keen to avoid what he called the “cul-de-sac” of Rothko’s formalism and the erasure of all self and subject matter in painting as championed by the American critic Clement Greenberg.1 The paintings on show here exhibit Hoyland’s equal emphasis on emotion, human scale, the visibility of the art-making process and the conception of a painting as the product of an individual and a time. As Hoyland stated in a 2009 interview with Hirst, reproduced in the catalogue to the exhibition: “I mean painting is – you know – acting purely. You can’t hide anything … Everything shows in a painting – it’s a seismograph, isn’t it, of the mind and the body?”2

Moving into the latter part of the 60s, the third and fourth rooms suggest a broadening of Hoyland’s palette and a more overt crowding of the surface with forms and, in the case of 17.1.69 (1969), a layering of the paint in so sophisticated and meticulous a manner that the canvas tends towards opalescence. But it is Hoyland’s shifts in practice in the 70s and 80s, as represented in the final two rooms of the exhibition, that feel the most radical, although the small scale of this show might account for this apparent sudden jump in style and process (all of the paintings in the penultimate room are dated 1971, and those in the final room span 1980-82).

In the 1971 works, the previously soft, sanded-looking surfaces and bold tones are abandoned in favour of pink, beige and brown explosions of thick acrylic that emanate from a central rectangular shape. Resembling candied flesh wounds, these pictures are layered, puckered and feature thick daubs of paint, with many of these blobs streaked with multiple colours as if bearing their own necessarily random patterning. Hoyland often made paintings from the inside, standing on the canvas and flinging paint around, sometimes straight from the can, in the manner of Jackson Pollock, and here this practice is visible at its most emphatic.

The paintings of the early 80s are quieter in terms of their sculptural dimension, tending back towards flatness, and yet the scribbly, jittery outlines of their shapes possess a comparable sensation of movement to those of 1971, like tectonic plates that have just begun to rub and unsettle. The titles of these 80s works begin to feature words as well as numbered dates (such as New Years Day (Blue Flame) 1.1.81, 1981), although these rarely illuminate the content of each canvas, perhaps happily so. Hoyland’s choice to title his works by date perhaps justifies the fairly straightforward chronological hang of this show, and they seem to provide of an index of his practice, for ever fixing the works to the moment in which they were made in a way that reflects their mindful, experiential effect when viewed in person.

Hirst’s admiration for Hoyland is evident throughout the exhibition and its accompanying literature, and his position as artist-curator is also inscribed in the visually led curatorial decision-making across each room. Yet his various biases as collector and curator are arguably celebrated here, with Hirst stating of Newport Street Gallery itself: “My favourite works by far are those by my contemporaries, and I definitely feel a responsibility to share them as much as I can.”3 Indeed, there’s something curious about the way in which the Hirst enterprise has now come full circle – not only producing and promoting his own work, but collecting and curating that of others in ways that will inevitably contribute to and shape these artists’ historical reputation and determine their survival. It becomes difficult to criticise the root of his project, however, which seems to be to offer artworks for view for free in the manner of a public museum: “I believe art should be experienced by as many people as possible,” says Hirst, “and I’ve felt guilty owning work that is stored away in boxes where no one can see it.”4 Despite this, the Power Stations element of the exhibition’s title seems to be drawn not only from Hoyland’s paintings and the industrial setting in which they are displayed, but also implies a complex and covert reference to a new station of art world power that Newport Street Gallery is now here to symbolise. 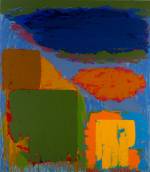 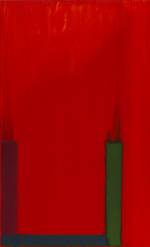 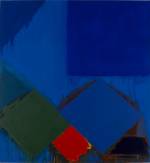 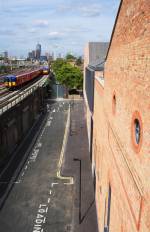