Jess Johnson: ‘My work is a visual stew’

Jess Johnson: ‘My work is a visual stew’

The fantastical world of Jess Johnson has arrived in Edinburgh, in the artist’s first solo exhibition in Europe. She talks about translating her intensely detailed drawings into virtual reality 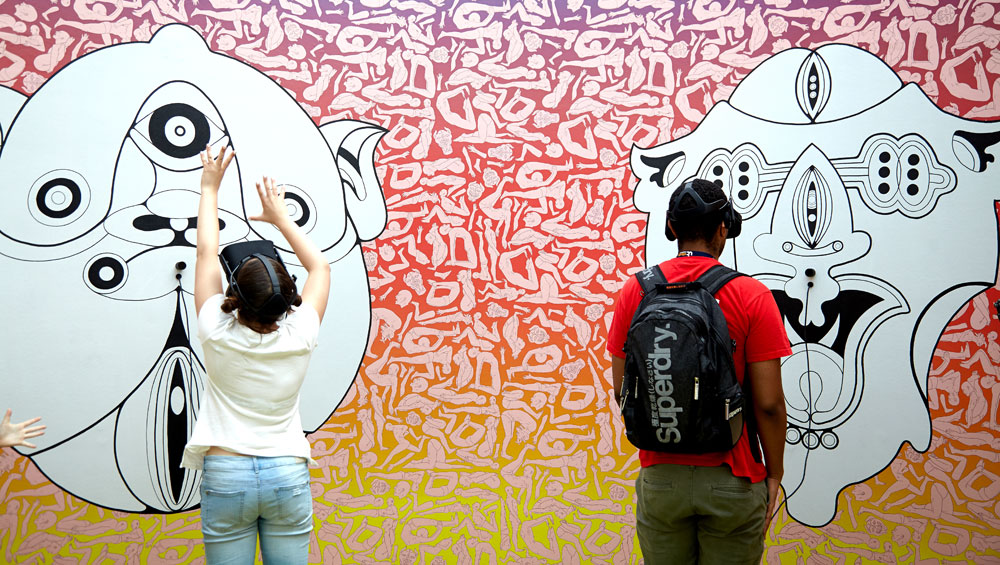 Eclectrc Panoptic has landed at Talbot Rice Gallery in Edinburgh. The vivid imagination of the New Zealand-born, New York-based artist Jess Johnson (b1979) comes to life in this exhibition of hypnotic wallpaper, intensely detailed drawings and a virtual reality animation. Expect to be consumed, intoxicated and transported all at once.

The gallery has been transformed into a psychedelic holodeck (a virtual reality facility from Star Trek) where symmetrically-faced demons stare down from the walls. Inspired by science fiction, including Frank Herbert’s novel series Dune and the films of Alejandro Jodorowsky, Johnson's work gives viewers an insight into her vivid imagination, where she has built a universe of characters, places and stories. Her pen on paper drawings are where she carves out her kingdom, but in her recent work with video artist and animator Simon Ward, her drawings have become virtual reality. Ward, also from New Zealand, worked on feature films such as Lord of the Rings and Avatar before pursuing his own practice, working full-time on music videos, web series and other collaborations with visual artists.

Johnson’s drawings, made with pen, fibre-tipped markers and gouache on paper, are eternal playgrounds for Ward to experiment with. Johnson says: “He has access to my whole archive of drawings and he cuts and pastes his own narrative through that world. He has a lot of autonomy in what he does. It keeps it interesting for me because he actually expands the world to feed back into my work, so it’s this interesting loop. In the studio, he will come up with imagery which I’ll then take and rework into a drawing, and then it just builds like that.”

In Ixian Gate, the viewer is taken to an otherworldly lair occupied by naked humanoids participating in ritual activity, strange aliens and a swirling worm monster. Bright colours collide with black voids, and complex architecture looms and disintegrates before your eyes as you travel through this anti-paradise. As scenes unfold, a strong musical beat brings out the rhythm of the animation. The viewer is always on the precipice of the next electrifying scene.

Johnson explains that the virtual reality aspect has been a logical progression for her work. “I've only ever used the tools which I have available to me, which is pen and paper, so all I can do are these still images – but, in my head, the cosmology of that world is much more evolved, moving and vivid. It feels perfectly natural, as if it’s always existed there, but Simon has just had to bring it through the third wall for other people to see.”

Johnson always considers the exhibition space and how the viewer experiences looking at her drawings. “All of that was this attempt to bring that world into this world – to bring out elements of the drawings and use them to create these parallel portals. They are limited, though, because they're still just stage sets, so when we got our hands on virtual reality technology, it was just this total revelation of what was achievable in terms of being able to imprint that world into someone else's experience.” She describes watching Ixian Gate through the lens of the virtual reality headset as like, “giving yourself over to something with infinite complexity, which activates something in a human brain and lulls you into this sensory soup”.

The experience of Ixian Gate’s virtual reality is far more overwhelming and absorbing than watching a video. Viewers are able to look around them, framing their own experience of the world they travel through for five minutes and 35 seconds. At one point, there is an experience – a feeling of vertigo – that is strangely disconcerting. Johnson says: “I think it’s in the fifth sequence, when you engage with the skywalk and you’ve got this existential black void either side of you. People find that scene the most discombobulating and affecting because you’re almost brushing up against infinity; having that experience of being able to look over the side into this infinite void. It’s only an approximation, but it’s still a more visceral experience than watching some galactic space scene on a screen, or reading about the existential void. That scene wouldn’t work as well if you didn’t have that build-up and the sensory overstimulation of the world as you go through it. Having to think psychologically about pushing people through all those different sequences is very interesting.”

While narrative is not overt in the work, Johnson opens up her world to the imagination of the viewers as she guides them through. “The world I’m drawing has this slow evolution which just happens, drawing by drawing by drawing, so, over time, it’s growing in complexity,” she says. “The relationships between the alien demigods, the humanoid figures, the architecture and the scenes of ritual – that’s all just had this natural evolution that’s stretched out through the drawing process. I still don’t know where it’s going.”

Johnson’s drawings are incredibly complex and she can work on the larger ones for up to a month. “I don’t do a whole lot of planning. It’s more fun for me if I’m just working everything out on the page. I usually have a really rudimentary starting point, like the text that I’m going to use, a certain arrangement of figures, or a piece of architecture, and I pencil that out and then I’ll start work on some small section and, while I’m finishing that, I might well think ahead to the next thing. So, it has this organic development and, that way, it still retains the element of surprise for me at the end of it.

“I think if I had it all worked out beforehand, it would prevent its growth, but if I work it all out on the page and encounter problems in the composition, that helps move the world forward. For that reason, I don’t use a computer, because if I had a delete button I wouldn’t be able to grow – all the mistakes, mutations and difficulties push it all forwards.”

The place she pictures in her works is built of personal influences that have inspired and affected her throughout her life. “I probably don’t look so much to the art world, but I’m quite inspired by people who have a very narrow focus of vision, attempting to manifest something in this world just through blind determination, which film directors do and authors who detail these incredibly complex other universes do and cult leaders do.”

One of these people is Alejandro Jodorowsky, a director who attempted to make a film of Herbert’s 1965 novel Dune. He never finished it because his obsessively detailed vision became too difficult to recreate and, eventually, the film rights for the novel were sold. However, so valiant was his attempt that it was documented in a 2013 film called Jodorowsky’s Dune, directed by Frank Pavich. “I just found Jodorowsky’s insane vision really inspiring,” says Johnson. “The team that he assembled, the set drawings, the vision he had for the film went on to influence 20 years of Hollywood movies. I remember being really affected by watching some of his earlier films. He would build this intangible sequence of atmosphere that was independent of linear or language storytelling. Iit activated something in my mind that I couldn’t understand, but it speaks to something primordial. I’ve never been great at verbalising or writing about ideas, and that’s why I use this visual language in my drawings and animations. There’s just something universal that you can speak to about the human experience through images.”

The language of architecture infiltrates Johnson’s works. Her drawings are structured by columns, pyramids, bricks, staircases and arches, which build palaces, temples, churches, prisons and sanctuaries where her characters are let loose. “I went to Miami for the first time a couple of years ago and really loved the art deco buildings for their blunt geometric composition. I also love brutalist architecture whenever I come across it, and the abandoned communist monuments of the former Yugoslavia, though I’ve never visited there. I’m not sure if I’m attracted to certain styles because I simply like them, or whether it’s because I see them as being achievable to draw. It’s a chicken or the egg thing.”

This year, after working in Melbourne for ten years, Johnson relocated to New York to shake things up, and this has had an effect on her work. “The past few years, I’ve been shut away drawing in my Melbourne studio and not really engaging with the world. So, by the time I got to New York, I was pretty eager to start feeding my brain again. There’s so much stimulus in New York that you’re swimming it as soon as you walk out the door. My drawings started to change as soon as I got here. The colours are brighter. They’re more chaotic and make less pictorial sense.”

When she was growing up in New Zealand, she used to visit a video store where she rented out the films that first sparked her interest in science fiction. “The owner of the video store did his best to have a really eclectic mix of films available. I had free run to choose 10 videos a week for $5, and I would just choose videos through the interesting covers they had.” Then, when she first started drawing, she had the opportunity to see art outside her country of birth, which inspired her. “New Zealand is such a new country, so when I first went to Europe and visited these museums to see the weight of the world’s artefacts, I was really drawn to them – seeing illuminated manuscripts for the first time, the narratives in miniature, the borders of the medieval prints.

“With drawing the aliens, I always rely on this symmetrical underlay in the construction, but then I can be quite playful, so they can be just this swirl of shapes. I think there’s probably an affinity of how I construct them to how other cultures have formed, how they have depicted other beings as well. Looking at really early caricature pictures of monsters, creatures and gargoyles – as in imagery from Japan, Bali and New Guinea – there’s that symmetrical underlay as well, which they work on. I’m sure all of that had an influence on the work, but then it’s also paired with the things that I was into as a kid, like video games, science fiction and comics – so it’s just a visual stew of all of that stuff.”

Johnson is the architect of her kingdom and the director on the set. Her detailed drawings show the relentless stylistic vision she has, full of personal, creative and historical influences, which, working with Ward in the medium of virtual reality animation, has opened up into three dimensions. It has never been possible to enter the imagination of an artist, until now.

• Jess Johnson: Eclectrc Panoptic is at the Talbot Rice Gallery, University of Edinburgh, until 8 October 2016. 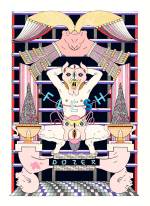 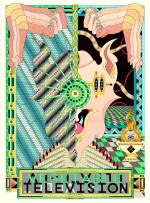 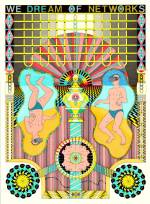