Daniel Steegmann Mangrané: The Word for World is Forest

Daniel Steegmann Mangrané: The Word for World is Forest

Step into this show and you find yourself immersed in the Brazilian rainforest, as the artist draws you in with installation, film and VR to highlight the plight one of the world’s most endangered ecosystems 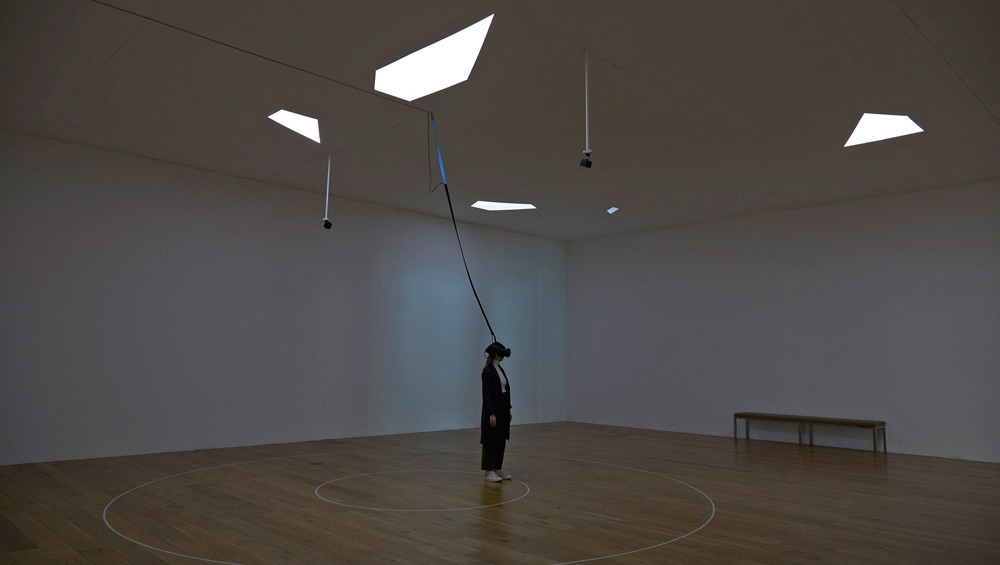 Catalan artist Daniel Steegmann Mangrané (b1977, Barcelona) has brought the Brazilian rainforest to Nottingham in ways literal, virtual and visceral. The opening room of his first solo show in the UK, The Word for World is Forest, which contains the first of two newly commissioned, site-specific works, is filled with delicate epiphytic plants - plants able to grow in the air. Thirty-five individual native Brazilian specimens – orchids, ferns, cacti, mosses and bromeliads - are suspended on invisible wires in handblown-glass tubes or “branches” around the gallery, inviting you to walk through this floating forest. 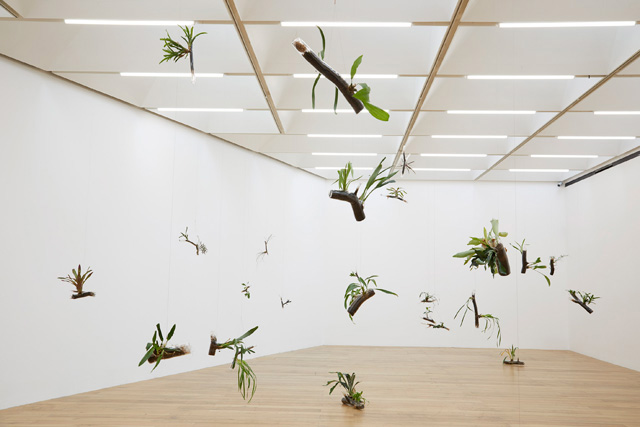 If it seems strange that these plants are isolated, deprived of the lush tropical vegetation that once surrounded them, that absence is precisely Steegmann Mangrané’s point: Brazil’s tropical rainforest (Mata Atlântica) once stretched all the way along the country’s coastline and inland, reaching as far as Paraguay, Uruguay and Argentina. Nowadays, only 7% remains of the area that once covered Brazil’s coast – surviving in patches - thanks to 400 years of territorial conflict and damage inflicted by economic, geographic, scientific and human degradation.

The truncated, solitary presence of the specimens at Nottingham Contemporary, suspended at eye, head and torso level – and occasionally placed on the floor, looking eerily like dismembered limbs - also means you have the opportunity to really examine their delicate root structures and their plump leaves, and to marvel at their seeming health; left to their own devices, they are thriving, even in the artificial atmosphere of a 21st-century art gallery. The vegetal smell reinforces their living presence, while their exploded, scattered choreography communicates clearly that the ancient ecosystem from which they derive is – literally – hanging by a thread. 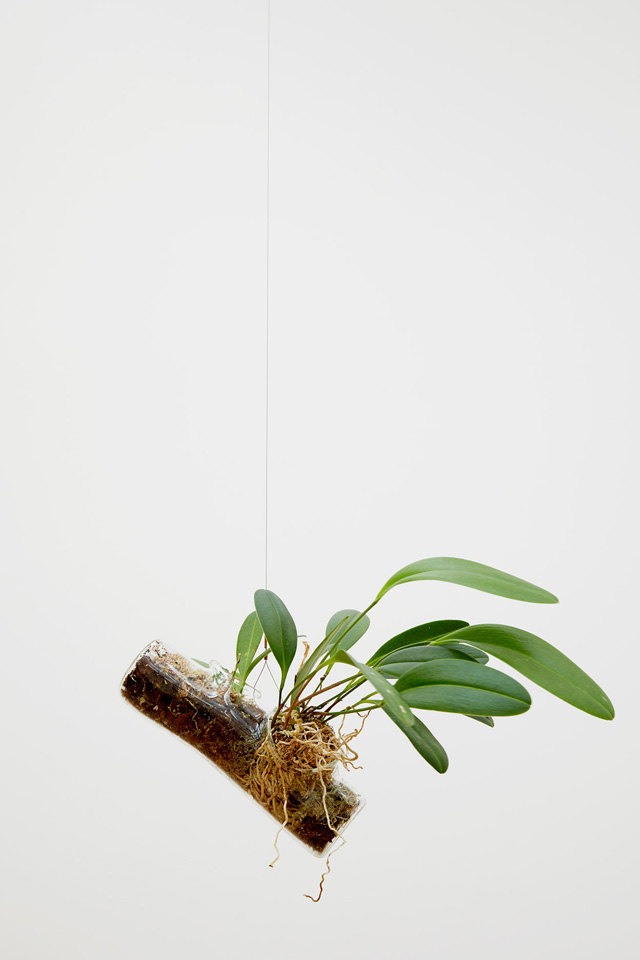 Steegmann Mangrané has spent the past 15 years of his life in Rio de Janeiro, working to articulate the connection between material and immaterial worlds. Recently, he has been further fuelled by the writings of radical Brazilian anthropologist Eduardo Viveiros de Castro, whose term “Perspectivism”, coined in the 1990s, expands on the Amerindian belief that all things, animal, mineral and vegetable, are united by a soul or spirit, his universe a place of exchange and communion - in stark contrast to the strict, top-down hierarchies of western science and economic systems predicated on competition and exploitation (often to the point of obliteration). 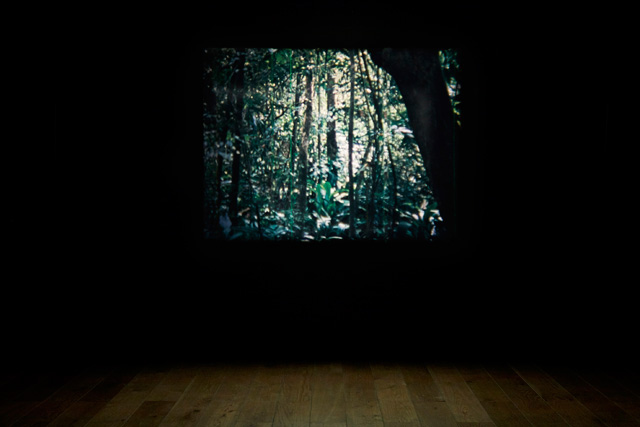 That sense of nature as part of a unifying force is almost overwhelmingly conveyed in a darkened anteroom to the second gallery: a blacked-out space showing Steegmann Mangrané’s film 16mm (2009-11). Lush greenery and flickering light fill your field of vision as the film slowly draws you deeper into the forest, tracking a straight line through the dense vegetation – he used a modified 16mm camera and a specially built dolly, ensuring that the camera moved along a cable at exactly the same speed as the film roll running through it. This has a mesmerising effect on the viewer, augmented by a soundtrack loud and resonant with the crackle and drone of insects (with occasional squawks from birds and wildlife).

There are four parts to Steegmann Mangrané’s ode to the rainforest here. The third is the least successful. A virtual reality headset swings from a cable in an empty room. Donning the chunky goggles, you are plunged into a world the artist created with the help of a company called ScanLAB, which produced 3D scans of a section of the Mata Atlântica, immersed in this digitised forest. Titled Phantom (kingdom of all the animals and all the beasts is my name) (2015), it suffers perhaps from the use of early VR technology, and the grainy, disjointed, black and white view inside the headsets is discombobulating and disorienting rather than revelatory. 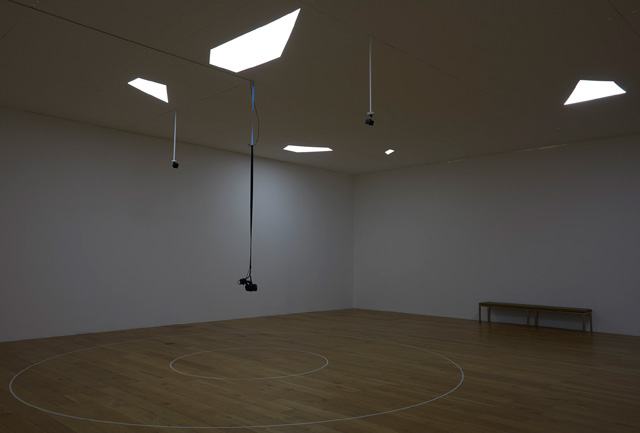 This work is set within the second site-specific installation, which takes a step back from literal or virtual representation to make our imaginations do the work. Called _C_A_N_O_P_Y_ (2019), it evokes the flickering patterns made by sunlight penetrating the forest canopy, using geometric shapes Steegmann Mangrané has cut into the gallery ceiling. These simple, irregular geometries are reminiscent of the collaged geometric shapes he has used in earlier works, such as Coqueiros (Coconut, 2006) or the cut-out shapes of Kriska (2014); but here, behind these “skylights”, LED lighting has been programmed to respond to real-time weather data being harvested from the rainforest itself, reproducing the exact light conditions of the forest – or what is left of it - thousands of miles away. 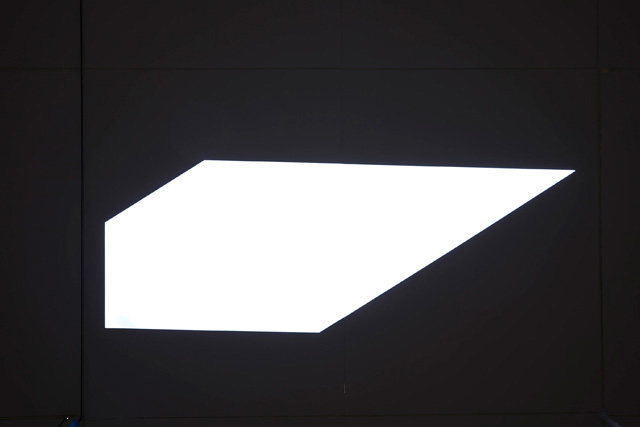 If the first sculptural installation and film are the strongest of these four works, their combined immersive and tactile qualities act all the more profoundly to remind us of the consequences of our actions on the world around us. 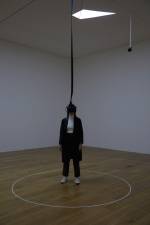