This winter, in celebration of the five hundredth anniversary of Giorgio Vasari’s birth, the Louvre opened the doors of its own “cabinet des dessins” by displaying 42 drawings highlighting the diversity, elegance and skill of the Renaissance man the public have come to know as the famous, yet at times unreliable, author of The Lives of the Artists. Although this exhibition could not be called important in comparison to another more celebrated and extensive show held in tandem and devoted to the same artist in his native Arezzo, for the admirer of disegno it is worth a pensive look.1

Giorgio Vasari’s legacy as an author remains an important source for art historians and social historians with an interest in Renaissance culture although contemporary writers often doubt the accuracy of his accounts. I will not attempt to readdress this unease but merely comment that Patricia Rubin, in her monumental work on Vasari highlighted the possibility of reading Vasari in the context of the 16th century thereby discovering a “powerful form of historical argumentation – one that effectively created art historical writing by consolidating the position of the visual arts as a topic meriting serious literary discussion”.2 Hence, a useful introduction to Vasari as a Renaissance character can still be gauged from reading extracts of his autobiography, skilfully placed at the back of his colossal effort to record The Lives of the Artists.

Born out of a humble nest in Arezzo, Vasari’s extensive accomplishments leave the reader rather dazzled. The geographical range of artistic operation Vasari devoted his life to spans from Rome, Tuscany, the Marches, Umbria, Emilia Romagna to Lombardy and Venice and its territories. A broad experience during which he worked for a number of popes, lords, gentlemen, local clergy and even lay and sacred female patrons.3 It is under the benevolent patronage of Duke Cosimo I de’ Medici however that Vasari truly puts his dominant stamp on the art and architecture of High Renaissance Florence. Surrounded by the elegance of the Tuscan city, Vasari uses his carefully cultivated position as a courtier to further sculpt the image of the court artist and is given the opportunity to showcase his extensive skill and expertise in several projects for the Duke. The “secret” Corridoio Vasariano, a passageway connecting the Palazzo Vecchio to the Palazzo Pitti (now filled with a rich collection of self-portraits by artists), the decorations of the Palazzo Vecchio and the impressive creation of the Uffizi were projects, which directly affected seven centuries of civic life in Florence and that became Vasari’s claim to absolute fame.4

The exhibition organised at the Louvre in its refined Salle Mollien pays due respect to Vasari’s multi-coloured artistic personality. The introductory panel picks up on Vasari’s courtly nature by stating his key role in the development of the bella maniera; an art of the court, elegant, precise in which art itself rather than nature becomes its model. The theoretical and practical foundation of the bella maniera being the drawing or disegno. To clarify, Patricia Rubin has described the process of disegno as “the command of idealised form that resulted from manual dexterity (drawing) and an intellectual perception of beauty (design)”.5  This skilfulness can be aptly observed in the 42 drawings on display in three adjacent rooms, bathed in a rich burgundy and black colour, on the first floor of the Aile Denon. Although impressive enough in their own right, the drawings used, as preparatory studies for large-scale architectural projects and paintings, are here often paired with their finished products.

As in other exhibitions showing a sensitive medium such as drawings, appropriate room display is key to an enjoyable viewing experience. Display does not disappoint in this exhibition. Elegantly placed on wooden panels resembling writing desks and lit by individual spotlights shedding the correct amount of light, the drawings emerge as individual masterpieces each framed in tasteful natural wood. The creation of a studiolo or atelier atmosphere adds to an almost “period eye” observation.

The first six panels upon entering show some of Vasari’s diverse subject matter such as images of the Immaculate Conception paired with an image of Christ in the House of Martha and Mary and also introduce some of his major patrons such as Duke Cosimo I de’ Medici. The drawings are mostly grouped by geographical area starting with Rome where Vasari worked in several loci including San Pietro in Montorio. Much attention is spent, justifiably, on his work in Florence for the projects mentioned above under the patronage of the Duke. Specifically the drawings with studies for the ceiling of several rooms in the Palazzo Vecchio are impressive. The study for Room of Cosimo il Vecchio deserves a closer look. The room dedicated to Cosimo il Vecchio was the first room planned for the newly decorated Palazzo on the Piazza della Signoria. Devoted to the heroes of the Medici dynasty this drawing in particular is interesting as it depicts the founder of the political and economic fortune of the infamous family that keeps its artistic grip tightly on Florence up to this day. Filled with different episodes, much as would be seen in paintings depicting a saint's life, the viewer witnesses Cosimo battling political enemies, triumphing in the middle panel as de facto ruler of Florence and finally devoting the rest of his time to enriching the city artistically and intellectually.6

Apart from his other work in Florence such as the monumental Last Judgment decorations for the cupola of Santa Maria del Fiore, the exhibition groups various drawings with religious or mythological subject matter such as The Christ of Judgment, The Assumption and Coronation of the Virgin and Pallas Athena in the forge of Vulcan. Notable among this group is the crowded yet delicate composition of the Bacchanale. This drawing, attributed to Vasari in 1964, has been shown to be the preparatory study for a painting of the same subject now in the Radichtchev Gallery of Saratov in Russia. A popular theme during this period, Vasari’s depiction of the sumptuous feast reminds of Michelangelo’s version of Bacchus, now in Rome. Giorgio Vasari’s version also allows the viewer an insight into the artist’s particular traits; one can gauge the complexity of poses and the movement of the different characters within the space as a thought-through composition, which equally should evoke the 16th-century allegories by Bronzino such as the Venus and Cupid at the National Gallery in London.7

The 42 drawings here on display have been chosen to give the viewer the chance to experience Vasari’s wide ranging skill and the way they have been set up certainly does not disappoint. Something remains to be said however about display location. The arrangement of a successful temporary exhibition on the first floor of the Aile Denon filled with Italian masterpieces by such artists as Titian, Raphael, Giorgione and the ever looming Mona Lisa has to be, to say the least, challenging. It seems therefore that the setting for the exhibition is rather unfortunate. Encountering the Salle Mollien on one end to the right just off a busy staircase leading to several grand rooms containing 19th-century French painting and at the other end through the very busy Italian painting section spanning five centuries, one unfortunately has the impression the rooms containing Vasari’s drawings are a sort of passage malchanceux; a passageway for visitors on their way ticking off their list of masterpieces on the provided museum map. The fact the drawings were not alienated by partitioning and rather existed within the busy walkway in between the grander wings did not aid to the visitor’s viewing experience. In tune with Vasari’s character the educated humanist courtier more could perhaps have been done to enhance the atmosphere of a studiolo or atelier; a more private viewing space would have equally enhanced a setting for the delicate disegno. Apart from setting however, this show remains a worthwhile visit should busy Paris overcome one.

Louis Frank and Stefania Tullio Cataldo, the curators of this show, remained loyal to the principal aim of this exhibition; to allow the concept of disegno, as the main principle of all creative arts, to take centre stage. Equally the catalogue accompanying this exhibition beautifully illustrates each of the 42 drawings on display and reminds the reader of Vasari’s impact on both the medium of disegno and the manner in which Italian Renaissance culture has been perceived since the 16th century.

1. For a standard publication of Vasari’s 142 biographies of Late Medieval to High Renaissance artists: Vasari, G., The Lives of the Artists (Oxford, 1998). The exhibition in Arezzo, which runs between September 3rd and December 11th 2011, presents an extensive look at Vasari as architect, painter and courtier and is entitled Disegnatore e Pittore – Arezzo 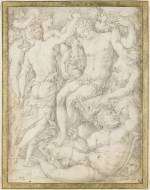