Into the Mountain: Simone Kenyon

Into the Mountain: Simone Kenyon

Immersive art doesn’t usually involve a 5.30am start and a day hiking in the rain, but Into the Mountain opens us up to the potential of contemporary art practices to be truly adventurous and transformative 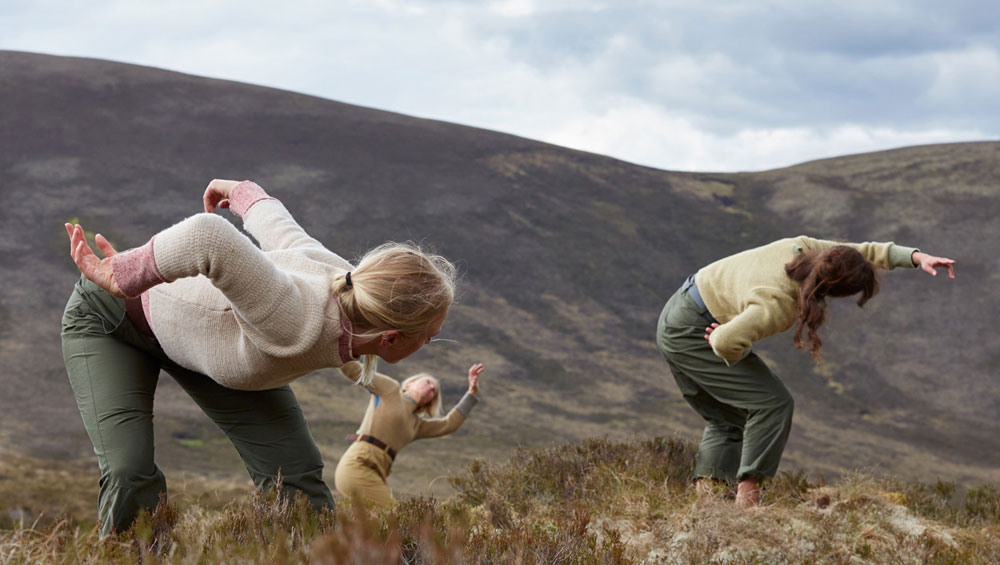 Produced by the Scottish Sculpture Workshop, the Cairngorms, Scotland
29 May – 2 June 2019

It is not unusual, these days, to be invited to an “immersive art experience”. Often, it involves some interesting sound design, lights carefully curated, heating adjusted perhaps. Concepts are suggested in novel, interactive ways, their media are various and inviting. Yet, these experimental events are usually not so far removed from more typical conceptual art exhibitions, often taking place in the context of the gallery, for a start, with the “immersion” heavily policed, by the expected (and necessary) rules and regulations. You may touch, but only fleetingly. To be involved in Into The Mountain, therefore, which includes a day’s hiking in the Cairngorms to reach the “venue” where it is being performed is refreshing and transforming – even if it does involve a 5.30am start.

Luckily, at this time of year, it is already light outside then, so this feels less unnatural than it might at any other time. While the short nights suggest summer, however, the weather does not. I put on layers, a beanie hat and a waterproof jacket (it is already raining outside) and head to the train station for an early train to Perth, where I must wait for an hour for another train to Kingussie, a little village in the Cairngorms mountain range, just west of Inverness. There, I have a strong coffee as the rest of the group congregate. We pile into a minibus that takes us to the beginning of the walk, douse ourselves with insect repellent and slip on yet another layer of waterproofs, as the rain begins to fall harder. This is certainly immersive, anyway. 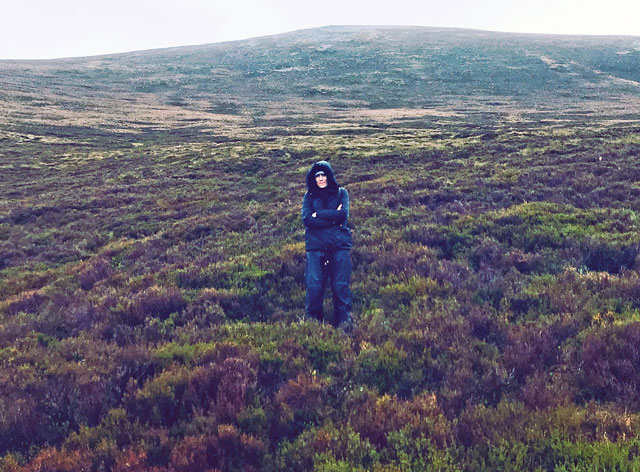 Intrepid Studio International contributor Christiana Spens hiking towards the Into the Mountains performance. Photo courtesy of the author.

Described as a “live artwork” by its creator, Simone Kenyon, and developed over the past six years, Into The Mountain is inspired by Nan Shepherd’s acclaimed work of nature writing, The Living Mountain, and her revolutionary approach to nature and walking that emphasised a spiritual and mental connection to the countryside, rather than one based on achievement and endurance. Written during the second world war, but not published until the 70s, the work encouraged finding pleasure in nature, perhaps as an antidote to the miseries of war and the physical pain and frustration implicit in enduring it. “I have walked out of my body and into the mountain,” as she wrote; in nature, she found a release from everyday physical life, and she wanted others to, as well. Finding joy in walking and in the mountains themselves, in just “being”, she saw a meditative and spiritual connection, and she was evangelical about these beliefs and observations. 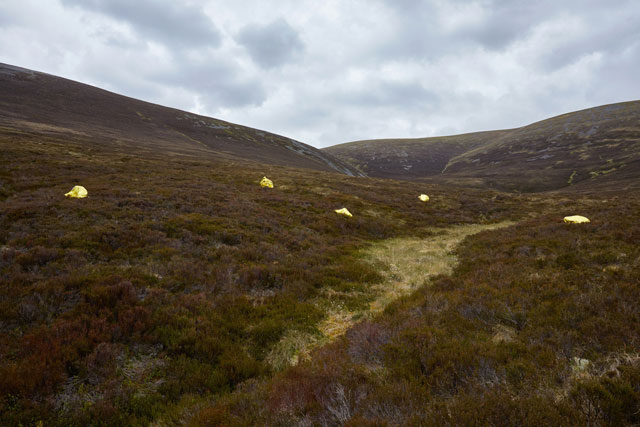 Nearly 80 years later, Simone Kenyon’s work is no less radical or spiritual. Drawing on the experiences of hundreds of women who have lived and worked in the Cairngorms, each day of the project brings three small groups of audience members through the hills of Glenfeshie, to converge between hills, in the bracken and heather.

We set off through forest initially, climbing up gradually; although in the rain, it is sometimes hard to see far beyond my own feet, whenever I do stop to look around, I see the harsh beauty that the Highlands are renowned for, and yet which are often enjoyed too briefly, and through photographs taken by others, or the illustrations on the labels of whisky bottles. We are encouraged to appreciate and linger on the natural beauty around us, as if it is the real artwork.

During short breaks, our guide reads us passages from Shepherd’s book. “To aim for the highest point is not the only way to climb a mountain,” she says, and this walk, and the entire project, is an antidote to masculine, competitive, conquering ways of thinking about mountains and climbing, and, indeed, life in general. Rather, Shepherd encourages a waking up of the senses, and an immersion in the sensuality of climbing, walking and seeing that is at its core poetic and mystical, recollecting the Romantic ideas of sublime nature of the Brontë sisters, Keats, Coleridge and Burns, among others. We are not to tame nature, but to submit to it, love it, even at its harshest.

Having walked up a sodden path through the trees, up along the edge of the hill, and out on to the expanse, over brooks and ridges, we gradually come up to the glen where we are to meet two other groups, and see the performance itself. We sit down in the heather and, moments later, hear the sound of birds and their echoes; these are human voices, though – a choir of women local to the Cairngorms and led by vocalist Lucy Duncombe – singing a vocal score composed by artist Hanna Tuulikki. 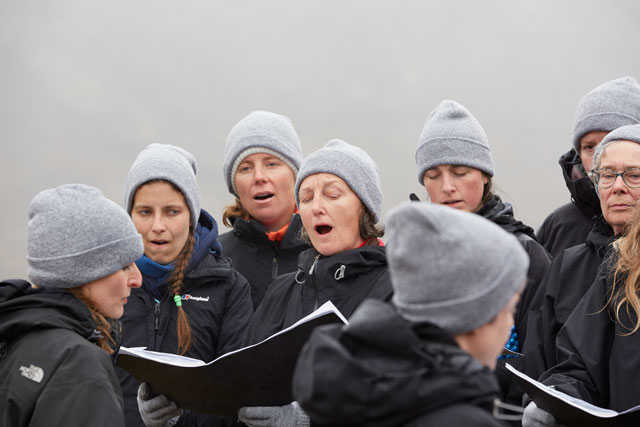 They look out into the hills and the audience follows their gaze; we see flashes of gold in the distance, and then, gradually, dancers emerge – Jo Hellier, Claricia Parinussa, Caroline Reagh, Keren Smail and Petra Söör. They move in collaboration with the mountain ecology, mimicking and extending the lines and movements of the hills themselves, drawing our attention to aspects of the environment as well as celebrating human interaction with it. This is communing with nature – and people – on a new level. 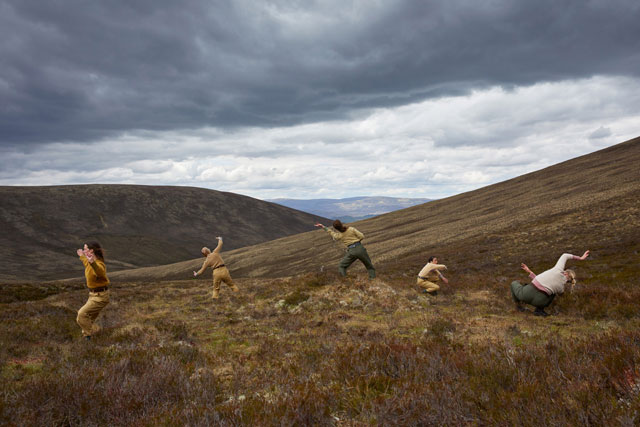 At times, given the rain and the almost pagan vibes of the performance itself, I wonder if the day might take a turn towards The Wicker Man, or perhaps more simply, Withnail & I. There is something cultish about the concept and its execution, after all. But we are in safe hands. We are simply encouraged to acquaint with our essential selves – opaque, passive and yet sturdy – both at one with the mountains and yet only passing through. We are nudged towards experiencing what it means to encounter other people and places with depth and spirit. There is something so bonding about being with a group out in the hills, perhaps especially so when they begin as strangers.

While Shepherd, and indeed this project, move us away from the idea of endurance and time (in favour of aimlessness and sensuality), it is hard not to be aware of these things during the walk itself. Perhaps in reading Ernest Hemingway on the train, I did myself and my artistic and spiritual growth a disservice, but at times I did identify with his writing as well – the monotonous and yet somehow brilliant clarity and groundedness to be found in walking, and in enduring the elements (if only for a day), and in being aware of those processes as well as the more mystical elements of the Highlands. 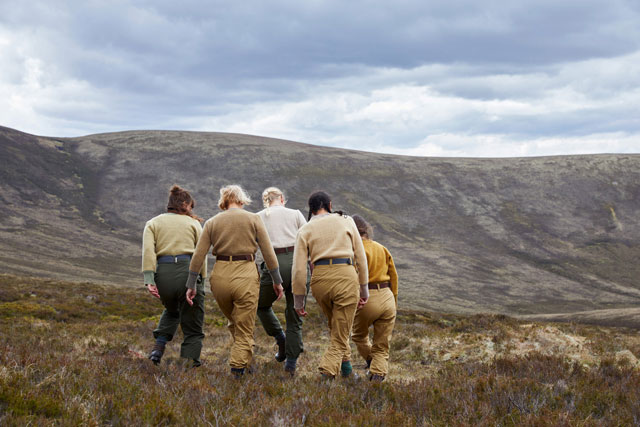 Ultimately, perhaps, I settle somewhere between Hemingway’s sensitively experienced stoicism (some would say martyrdom) and Shepherd’s blissful mysticism. Towards the end of the walk, because my boots are too small and have caused bad blisters, I have to take them off and walk through the mud, just wearing socks. The coolness is blissful for my sore feet. I feel a sense of achievement, to have put up with the boots for so long, and yet I do also feel that much closer to nature for taking them off. Nearly a convert.

This is a process, though, and a beginning. As Shepherd says, and as is read to us: “Walking thus, hour after hour, the senses keyed, one walks the flesh transparent. But no metaphor, transparent, or light as air, is adequate. The body is not made negligible, but paramount. Flesh is not annihilated but fulfilled. One is not bodiless, but essential body.” 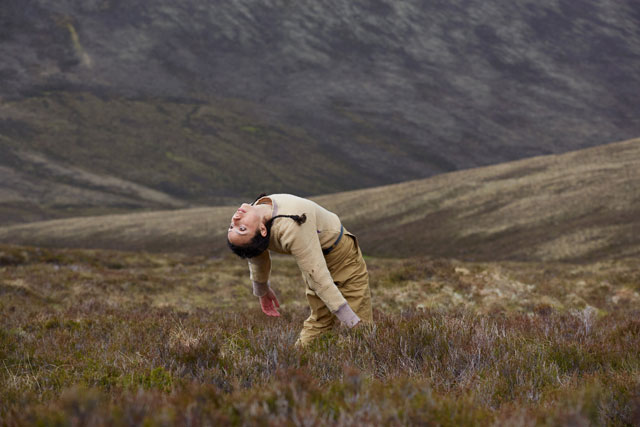 Art, then – multidisciplinary, romantic and wild – has taken us out of ourselves and brought us back to ourselves at once. With its dismissal of gallery space, of convoluted explanations at expense of experience, with its the lack of traditional material expression, Into The Mountain is triumphant. Art comes from life and our world, it says, and it need not be cut off or compartmentalised. Artists need not expect too little of their audiences, or create work primarily for each other. Into the Mountain opens us up to the potential of contemporary art practices to be truly adventurous and transformative. It points towards new horizons about what art can do, where it can roam, and who it can take with it.

How the Earth Must See Itself

For those who were not able to make the expeditions into the mountain, Simone Kenyon, with Director and Editor Lucy Cash, have made a beautiful short film that pays tribute to the project and its choreography, as well as the Cairngorms themselves.

Featuring the dancers and the early summer setting of the original performance, the film is a brilliantly sensual and meditative record of the project, filmed on S16mm film and including a voiceover by actor Shirley Henderson that quotes from Nan Shepherd’s book. This acts as a poignant coda to the project as a whole, and a timeless reminder of the poetic properties of nature.